Capone begins his 2015 FANTASIA FESTIVAL coverage with reviews of NOWHERE GIRL and ANGUISH!!!

Hey everyone. Capone in Montreal here, once again covering a few days in the life of this year’s Fantasia International Film Festival, unquestionably the finest genre festival on this half of the globe. The event goes on for three weeks, and believe me, if I could be here the entire time, I would be. The offerings every year are tremendous and represent the best genre works from all over the world. I’ll be here for five days’ worth of screenings, and since I just got in mid-day yesterday, I was only able to make it to a couple of films on my Day One, so we’ll ease you into the coverage. Enjoy… 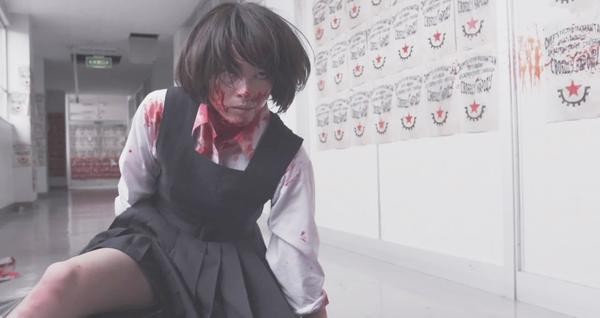 Perhaps not the best choice to begin with, especially after only a couple hours of sleep the night before and a long travel day, but this live-action selection from the legendary Japanese director Mamoru Oshii (the GHOST IN THE SHELL films, AVALON) features an unforgettable final act that makes up for the deadly slow pacing of the early parts of the movie. Set in an all-girl arts college, NOWHERE GIRL begins as something of a mystery. Of all of the girls in the school, Ai (Nana Seino) doesn’t stand out in any way except for her skills as an artist. The terms is nearing its end, and she regularly spaces out in class (almost to the point of being comatose), while focusing all of her energies on a large-scale sculpture project that will serve as her final exam art piece. While the other girls torment her strange behavior, the faculty is for forgiving since apparently she’s suffering for PTSD after an unknown incident (thus, the mystery).

Naturally, we get sounds and visions that clue us in that the traumatic incident in question had to do with soldiers, a helicopter and a great deal of violence. The early two-thirds of the film are deliberately slow—like dying snail’s pace slow—and even if there is a very specific reason for this (which there is), that doesn’t keep some early moments of the film from feeling like an endurance test of patience. There are bursts of aggression from Ai, especially when she is physically challenged by the other girls in her class, and in those moments, we see that she possesses impressive self-defensive skills that might also be a clue as to her life before this school.

The adult characters, including her creepy art teacher, her therapist, and an older man who seems to be as interested in her recovery as he is in her art project, also offer hints as to where Ai has been and where her story might be headed. But nothing quite prepared me for the revelation in the finale of NOWHERE GIRL, when all hell breaks loose, Ai’s project is unveiled (the monstrous structure is under tarps for most of the film), and the entire plot loops around on itself in a mind-bending explosion of violence and action (now might be a good time to clue you in that Nana Seino is a fantastic martial artist, as well as a great actor). Most importantly, the final act also reveals director Oshii’s skills as a ground-breaking visual artist, storyteller, and world builder.

All of the glorious blood and guts aside, NOWHERE GIRL makes you suffer a great deal before you get to the good stuff, which in many ways betrays the exercise in stagnation that the rest of the film displays, like it couldn’t quite commit to being the dullest existential movie ever made. From the ponderous, repetitive piano score to its washing-out color scheme, the film practically dares you not to doze off. While I firmly believe that a terrible ending to a film doesn’t necessarily ruin an otherwise great movie, I also believe that a spectacular ending can’t save one. If you ever get the chance to check out the last 20 minutes or so of NOWHERE GIRL, you absolutely should, but I can’t in good conscience recommend Oshii’s latest. 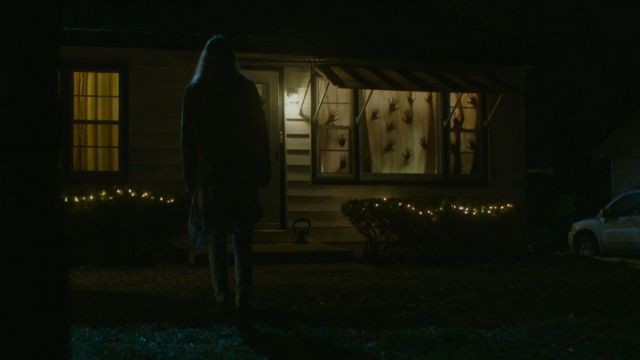 Making its world premiere at Fantasia Festival is ANGUISH, the writing-directing debut from veteran genre producer Sonny Mallhi (THE STRANGERS, HOUSE AT THE END OF THE STREET, AT THE DEVIL’S DOOR), and this one offers an unusual take on the possession storyline. In fact, the film actually starts out as a ghost story that morphs into a possession tale that subsequently rejects an exorcism element, all of which is blanketed in a subtext about shoveling drugs into children as a means of dealing with behavioral issues. There’s no denying, this is an ambitious work that hits most of these beats skillfully, even when it tries a little too hard to scare us when it should be pulling us into the lives of these characters.

Appropriately enough, ANGUISH begins with a teenage girl’s death. Lucy (Amberley Gridley) and her mother Sarah (Karina Logue) are arguing in the car. Lucy (who now prefers to be called Lucinda, because it sounds more grown up) is in her full-on rebellious phase, and they get into it when mom rejects the idea of Lucy going on a camping trip with her friends. The emotional girl jumps out of the car and is immediately struck by a car and killed. Jump ahead (or perhaps sideways is more appropriate) to 16-year-old Tess (Ryan Simpkins) and her mother Jessica (Annika Marks), new to the area and living not far from the scene of the accident. Tess’s father is in the military, and they communicate by video chat, but she finds that a poor substitute; it’s also clear the Tess is on a strict drug regimen to deal with undisclosed psychological issues that seem to involve delusions and sounds in her head that led to behavioral issues. But we soon find out that her issues aren’t mental problems; she’s attuned to the world of the dead around us, and it’s driving her insane.

On one of her outing around the town, she comes across a crude memorial to Tess. She kneels to examine it and is almost pulled into the ground by an unseen hand, in one of the films most terrifying moments. It becomes clear that the filmmaker Mallhi is going for a more mature, emotional experience with ANGUISH, but that certainly doesn’t mean he’s not also going to take every opportunity to scare the pants off of us. Some of these scares are 100 percent earned and others feel like cheep jump scares designed to make us scream because it’s supposed to be a scary movie. The undercut the power of some of the stronger, more dramatic material, but not enough to ruin the entire film, thankfully.

As ANGUISH continues, it becomes clear that the dead Lucy doesn’t want to be dead and decides to take up residence in Tess’s soul, at least long enough to see and speak to her mother again. Since Tess is so uncomfortable in her own skin and tends to shrink away in the company of others, this seems like an ideal fit for a time. But Jessica doesn’t want to lose her daughter, and Sara isn’t selfish enough to take away another woman’s daughter just to have hers back for a time. In one of my favorite elements of this story, they seek out the help of the local priest (Ryan O’Nan) in getting this visiting spirit out of Tess, and his response it to admit the entire situation is beyond his abilities or understanding, which I love. In a genre filled with interfering religious types who think they can solve all possessions, it’s refreshing to see one admit his shortcomings and simply say “I’m outta here,” leaving the power of family and compassion to be the strongest tools.

There are no actual evil forces to battle in ANGUISH. Grief is the closest thing we get, and that needs to be overcome more than defeated. As a visiting, inhabiting spirit, Lucy isn’t a negative force. She is within Tess by permission, while Tess takes a break from her miserable life and troublesome doctors. As the titles implies, this is an emotional take on this material, and young Ryan Simpkins is particularly strong as the troubled Tess who simply does not have the fortitude to deal with her own life, let alone the lives of wayward spirits. The idea that some forms of mental illness might be explained this way is bold and intriguing stuff.

In many ways ANGUISH succeeds on several fronts, as a psychological journey into the spirit world, and as a flat-out scare movie. I’m not sure the combination always works when both sides of that equation are ramped up so high, and if I had one overriding complaint about the film it would be that the tonal balance is off. But the dramatic stuff works so well that the spook-house scares were forgivable. Plus, I like being scared, so Go Team. Of all of the horror offerings I’ve seen lately, ANGUISH is one of the few I’d be curious to see again, just to look at the visual choices, which are often bleak, poetic and quite potent. ANGUISH is a debut worth seeking out.