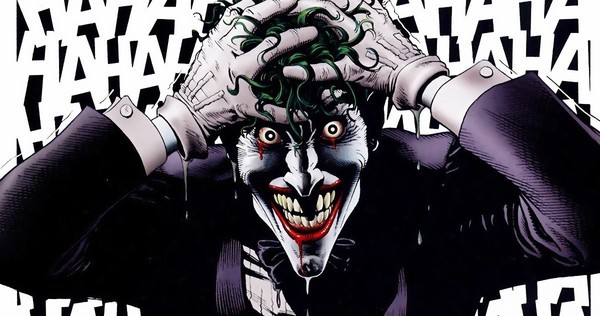 Hey folks, Harry here - and boy has this day turned around!   The STAR WARS: THE FORCE AWAKENS panel was outstanding, that BTS reel kicks unholy amounts of ass, then there was the ASH VS THE EVIL DEAD tease - which has me smiling greatly!   Now this...   Bruce Timm announced that the WB Animation team will be animating THE KILLING JOKE...  the just breathtakingly awesome story from Alan Moore and Brian Bolland!!!  This is my all time favorite BATMAN and JOKER story.   I think most sensible BATMAN fans agree.   It's just beautifully illustrated, brilliantly told - and well...   we know the team making SUICIDE SQUAD are huge fans!

This will be out some time next year.   They're going to structurally add a 15-minute prologue to the tale, which helps set up this particular vision of the Batman universe.   There's also rumors going around that it could be possible they're going to add the character of Harley Quinn into the mix.  I'll just have to wait and see if that ends up being true or not, but I'll finally be able to put an animated feature of the KILLING JOKE next to the two-part DARK KNIGHT RETURNS - as it should be!   Now, if they'd only do this for Theatrical Release!   Then do SUPERMAN VS MUHAMMAD ALI in Neal Adams' style!  C'mon!  DO IT!!!