Harry says Alan Taylor's TERMINATOR GENISYS takes your TERMINATOR, drips in a little T1000 then shakes it up with holy fuck what are they doing time-travel!

(NOTE: This review deals with a lot of heavy spoilers for the film - because the results of those spoilers are just fucking insanity that I had to talk about as a Terminator fan.   However, if you want no spoilers, know that the film is good spirited fun, is likely to turn you upside down on your head for a bit, and is very definitely the 3rd best in the series behind the two James Cameron films. Now - watch out for spoilers and continue:) 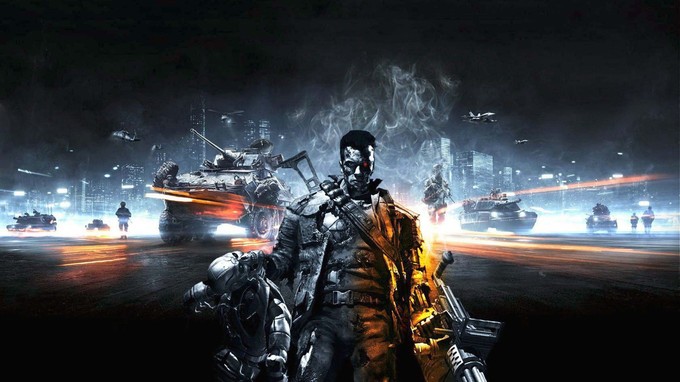 TERMINATOR GENISYS was given James Cameron’s seal of approval, he didn’t call it an earth-shattering revelation that he only dreams he could have made.   But he seemed to have a good time with the film, and I have to say – after the last two installments, this is a step up.

Not that we particularly needed another TERMINATOR film.  But we’re going to be getting a lot of remakes and sequels to a lot of properties that we didn’t scream for, but if they’re going to be made, let’s at least hope they’re entertaining.

I found this one, entertaining, but other than the aging Terminator and the face of SkyNet – the film basically didn’t give me a whole lot of newness.   Although, we do get to time travel a couple of times – and in doing that – well, silliness ensues.   For example…

If Kyle Reese and Sarah Connor met back in 1984, like in the original Terminator… and we know that story really really well.  But you see, the “Pops” Terminator, old Arnie, well he showed up with Sarah was a wee little girl, but decides to raise her as a Good Terminator does.  So then they rescue Kyle Reese, that they know is going to be killed by a T1000 unit, unless they save him.   So obviously he gets saved.   But because Sarah & Pops Terminator know everything that is seemingly going on now…  They’ve a trap to kill a T1000  - and that’s seven shades of wicked cool…   but ok – now they’ve destroyed two Terminators – and you’d think that right about then, Sarah and Kyle would “MATE” as Pops Terminator advises…  but instead, they travel to 2017, cuz Kyle Reese has a distinct DREAM about a “killer” app called GENISYS – where he knows that it is SKYNET and must be stopped before it comes online.   So they time travel to 2017.

Without making mad passionate edge of the apocalypse sex to save all of futurekind.   In fact, now, young Sarah Connor is running around 2017 being the 1984 aged Sarah Connor.   And, so yeah – they’ve got to now destroy this GENISYS thing – and as you know from trailers, there’s an evil terminator that looks like John Connor now – and you can fuck him up with magnets, so they kind of have a handle on him.  But at the end of the day, sometime in 2017…   The parents of John Connor are stuck, and the world hasn’t gone boom, and Kyle & Sarah haven’t even boom shaka boom boom’d yet.  But then, they also realize that they’re all on an alternate time line now.  “No fate but what we make”

But…  To me – Sarah and Kyle killed John Connor by abstinence.  And the baby they made once upon a time on another Doc Brown theory of time travel, that baby grows up to become a nifty biologic nanotech nightmare that’s all about the preservation of SkyNet no matter what – so…   in terms of plot holes… this one is big enough to drive CHINA through.

I mean, they’ve managed to unfuck the future.  I mean, so at the end of the film, the aging Pops Terminator has now become a T1000 after taking a liquid metal bath as the GENISYS world goes kablooie.   I know they said all the goo needed was a chip, so once he goes in, the chip activates the metal goo and makes a gooey Pops Terminator with new bonus features.

So – the whole point of the entire history of TERMINATOR movies has been to prevent the life of John Connor.   Now that has happened.  I’m also pretty sure this movie completely erases T2, cuz – John Connor no longer exists, which means the Robert Patrick T1000 has nothing to do.  And the “Hasta La Vista, Baby” T800 didn’t need to protect him.   Sarah Connor was never put in a mental institution because she didn’t even exist on Planet Earth between the years of 1984 and 2017.

Does this mean, SKYNET is definitely dead – and we no longer need a future leader?   Seemingly, unless you stay through the end credits…  where you get the idea that the 11th Doctor might be up to some dirty unknown future tricks.

I know I seem awfully distracted by Kyle and Sarah not making their baby, but it’s kinda been the key issue for the duration of this series.  And to have them skip that fairly major step…  I mean, they skip making John, go straight to a 2017, that shouldn’t have a John in it, except that John is now a killer robot from the future that has come back to ensure the creation of SKYNET now GENISYS…  but if he died in this one, and I’m not thoroughly convinced of that…  but let’s say he’s gone.   What the hell happens now?

Obviously it is 2017 and the apocalypse is nowhere in sight.   We get the idea that Sarah and Kyle might be getting sweet on one another and Pops T1000 is there to change future diapers…

How’s the action in this one?  Pretty solid.  There’s some fun stuff, but like the cool stuff that Byung-hun Lee’s T-1000 does makes ya wonder why Robert Patrick’s T-1000 didn’t pull a spear from his rib and skewer folks with it, cuz damn that’s neato.   This new T-1000 tosses parts of him to track folks and is basically a more adept T-1000, but never actually chilling the was Robert Patrick’s performance gave us.

Jason Clarke’s John Connor is just a complete wash-out for me.   Jai Courney’s Kyle Reese is a pale imitation of Michael Biehn’s great Kyle Reese – and Emilia Clarke’s Sarah Connor – well, I liked her.  Obviously not the way I fell madly in love with Linda Hamilton’s original, but I think her time as Daenerys Targaryen has me just solidly in her corner.

The best thing about TERMINATOR GENISYS is Arnold Schwarzenegger’s old Terminator.  The audience consistently reacts perfectly to his actions, he’s always getting the loudest laughs and applause.  The reason is – he’s the ICON in the room.

Actually – the second best thing in TERMINATOR GENISYS could’ve been the best thing, had they let the character join Sarah & Kyle & Pops T-800 for the rest of the flick… and that’s J.K. Simmons, who plays the 33 years older version of the Cop that tried to arrest Kyle in the store at the beginning of this film.   He could’ve been an outstanding addition to the team – in the same kind of dynamic that Miles (Joe Morton) Dyson was in T2.  For his brief time, he was perfect.

This is a planned trilogy – so I’m sure we’ll get into stuff like… do they go back in time to make the baby?  Do they just make the baby now and hope they’ve delayed the inevitable?   Seriously – it’s like they took the first TERMINATOR movie – decided they wanted a T1000 – but now…  they’re living an existence that none of the previous Terminator films have prepared us for.   And I suppose that’s nifty.

I do feel the film got a bit expositiony at times – and for everyone that loves Matt Smith, we all didn’t get enough, but I get the idea we’ll see plenty of him in the next chapter in the Paramount trilogy.

I’m seeing the film again with my nephew on his Birthday – and I’m looking forward to it, though – as I said…  this film did essentially erase John Connor from existence as we know it.

This is my fave of the non-James Cameron films…  and it is 10 to 15 miles of awesome lacking from being close to either TERMINATOR or TERMINATOR 2.   But really – even though this film deeply references the first Terminator movie, it essentially rewrites it.   All those cops in the police station, totally make it now.   Which mean old Lance Henriksen could show up.  Because none of that drama in 1984 happened.  Sarah’s roommate and the other Sarah Connors killed in the first film – they’re all alive.

This is essentially the JJ Abrams STAR TREK of TERMINATOR movies.  Resetting the time line for its own agenda.  To play in Cameron’s universe, but not be beholden to it.  Once again delaying the apocalypse a little further down the line.   I’m fine with that, but they’re playing so fast and loose with the rules, that we know everything we think we know about the series is being reshaped.

I mean.  The Pops T-800 can build a fucking time machine.  I imagine he can build all manners of future death-tech.  Where exactly are they planning on taking this thing, because they totally just shook the living hell out of the Etch-A-Sketch future that Cameron gave us.

At the end of the film though, I enjoyed it.  It had surprising twists and turns throughout, but where the film is taking us – being the first part of a new trilogy has me very curious.  Alan Taylor did a nice job with the film, had some inventive action, but nothing on Cameron’s level.   Closest is the Acid Shower for a T1000.   I thought that was pretty nifty.  Nowhere near as cool as frozen T1000 HASTA LA VISTA BABY explosion though.

Still, it was very watchable.  And yeah, I can confirm that I will worship Emilia Clarke even when she’s not riding a Dragon!   She makes for a damn fine Sarah Connor.   Jai Courtney unfortunately reminds me too much of A GOOD DAY TO DIE HARD – so I’m instantly resistant to his charms upon initial views – perhaps I’ll like him more in subsequent viewings.

Overall, pretty fun – but with some absolutely bugnuts crazy ramifications for the pre-existing time line.   Which has the absolute potential to drive you f’n crazy.  But then, that’s probably why Cameron liked it.   The film has a real, FUCK IT-attitude.  You’ll see.  These are not careful time travelers that consider their actions all the way through.  They’re more like…  HAVE TIME MACHINE WILL TRAVEL – and they don’t care if they were supposed to make a kid.   CRAZY.   Really CRAZY.  Let’s see if you can like it, or if you just scream throughout.   I see people going all over on this one.   That said, Ernie Cline, Father Geek, Comic Book John & I all had fun with it.   Even Quint seemed to have fun with it and that salty seaman I had pegged as being cantankerous upon this one.   So – who knows.  You could have fun with it too.