The Rock has to stop George, Lizzie, and Ralph from picking people up and eating them in RAMPAGE: THE MOVIE! 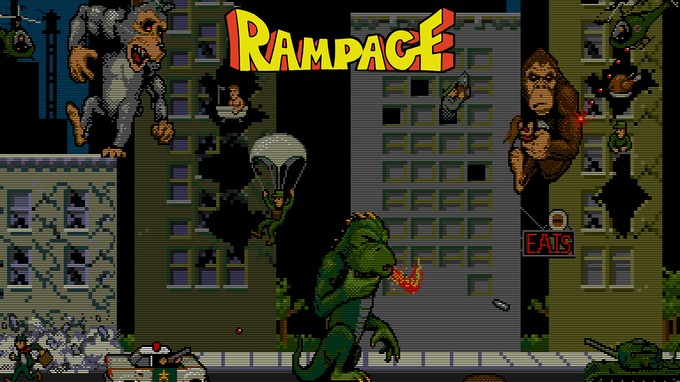 Takin' a moment to say THANK YOU to the amazing fans around the world who continue to make SAN ANDREAS a record breaking global hit. We wanted to create and deliver a movie that's epic, entertaining and quality. With a bald, tattooed and handsome sumbitch of a star who operates every known vehicle, aircraft and boat known to man in the movie. Thank y'all so much again and it means the world to us that you're enjoyin' the ride. #SanAndreas. *** (and as of today, THANK YOU MEXICO for making #SanAndreas the biggest box office for a Warner Bros movie of ALL TIME officially surpassing HARRY POTTER.) #BreakOutTheFineTequila

A day after he posted that little ditty on Instagram, and Dwayne “The Rock” Johnson’s been scooped up for another disaster movie.

New Line has signed the former SCORPION KING to star in a live-action adaptation of Midway’s 1986 game, RAMPAGE. NON-STOP writer Ryan Engle is writing it now, but no one’s been locked down to direct. I’m kinda thankful Gareth Edwards and Roland Emmerich currently have their hands full.

For those who never played RAMPAGE (you can try out the NES port here), it has you play as one of three monsters: giant gorilla George, Lizzie a lizard-esque pseudo-Godzilla, and an oversized werewolf named Ralph. Your objective is basically to destroy as many buildings and eat as many people as possible before the pesky army and/or the laws of gravity conspire to take you out. When you lose all your health, it's revealed that *gasp* you're actually human!

Unfortunately, The Rock is not playing any of those characters; he’ll be playing his SAN ANDREAS character of the guy who’s able to endure and possibly even prevent large-scaled disasters without damaging that marquee-level smile of his.

I fed RAMPAGE more than a few quarters in my day, and spent a healthy amount of time battling through the RAMPAGE: WORLD TOUR update on N64, and I’d always kinda dreamt about its big-screen potential. They’ve made over 30 GODZILLA films with a myriad of monsters, surely making a movie about three big-ass monsters tearing shit up and eating pedestrians a la carte can’t be impossible, can it? I’m kinda bummed that The Rock isn’t playing one of the actual monsters (*cough*George*cough*); yeah, I get that you don’t want to see your leading man causing all the massive destruction in your action tentpole, but without that, isn’t this really just SAN ANDREAS (or the like) in slightly new trappings? Plus, wouldn’t the Hulk-esque conflict of, “Oh shit, I have to figure this out before I turn into that thing again and do bad things to people/places I like!” be more interesting than just flying around in a helicopter (or whatever he’ll have to do) yelling at red-shirts and loved ones to “Run!”, “Get outta there!”, etc.?

But still, there will almost definitely be a giant gorilla, lizard, and werewolf smashing their fists into city windows and stomping on tanks, and that’s a good thing. Actually, after Gareth Edwards GODZILLA, maybe I shouldn’t just assume I’ll get what I pay for out of this one…

What my old-school gamers out there feel about this one? More cinematic potential than Q-BERT or SINISTAR?