Hey folks, Harry here… Back with this week’s PICKS & PEEKS Column. Wish I could have kept up with the releases the past few, but I had to step away for a bit for some personal reasons. Back though with some great titles. So let’s hop straight in shall we? Here ya go… 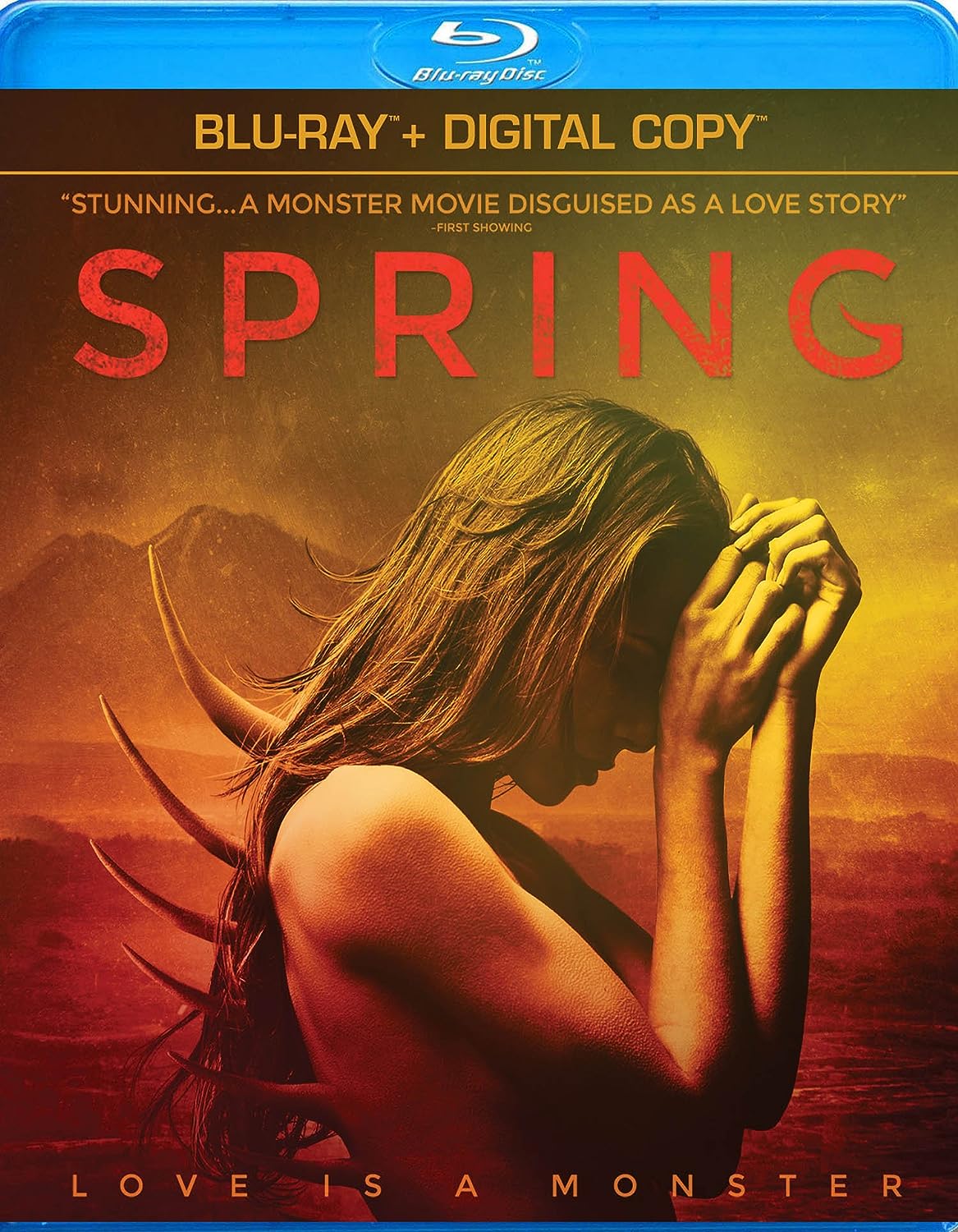 When I saw SPRING in advance of its FANTASTIC FEST screening, I declared that it was a Richard Linklater romance crossed with H.P. Lovecraft and that’s still the best way to describe this marvel of a horror romance. A film that flirts with Val Lewton shadows, and lets it all hang out by the end. This is one of the great Indie horror romances that I’ve seen. Fantastic film! 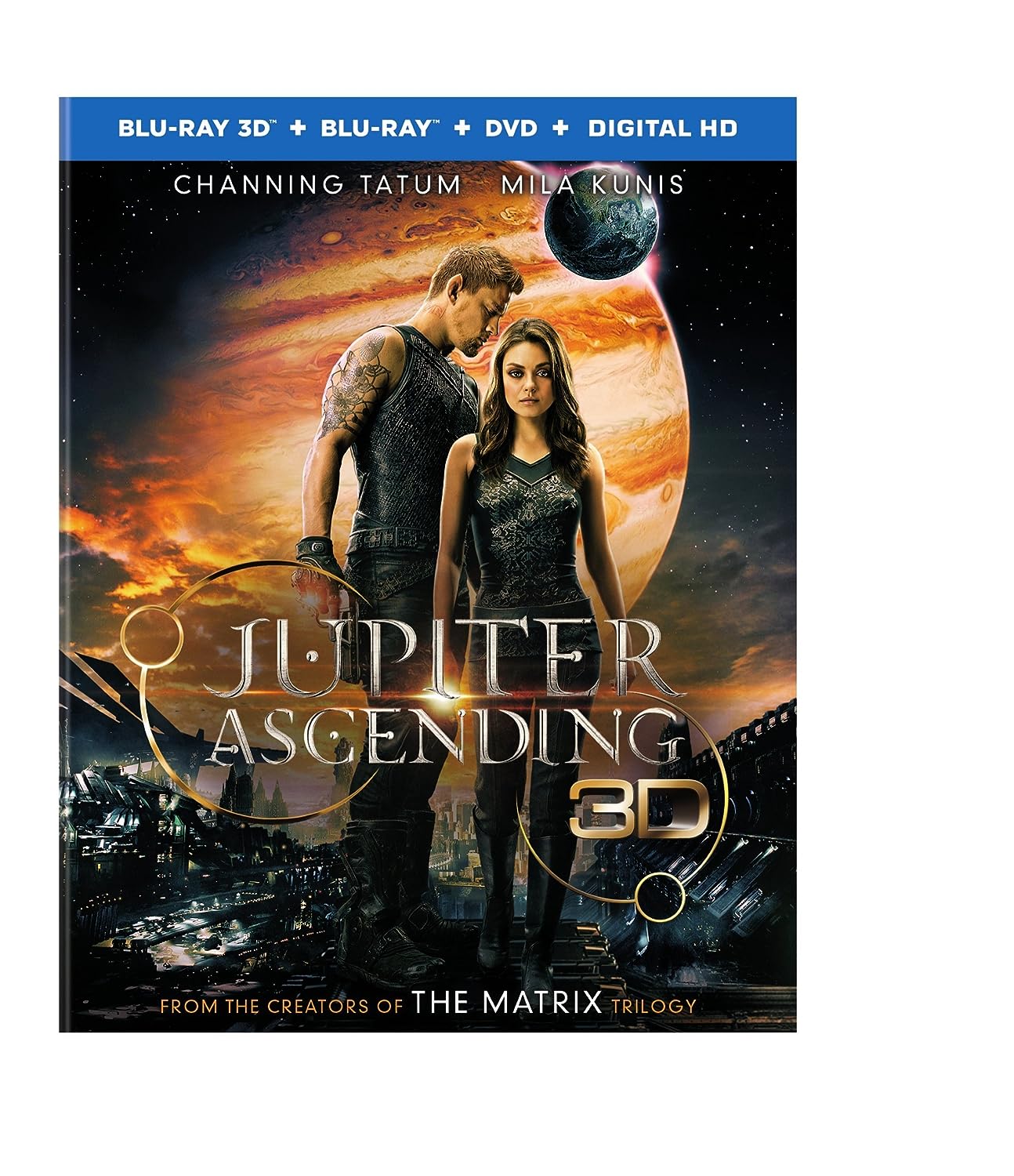 A whole lot of people missed out on seeing a great Wachowski directed Science Fiction “Disney Princess” tale utilizing the science fiction look of Paperbacks from the Seventies – and it’s just fun. Mila Kunis is essentially Space SNOW WHITE, and her Prince Charming, ain’t a prince, but a lovable DogBoy – and that’s just awesome! My favorite parts of this film are the production design, visual effects and Michael Giacchino’s score… the exquisite attention to detail, the visual smack of the effects and the soaring score combine to back up the crazy what if scenario that was suggested by PROMETHEUS and further made out the vain of society as being the root of evil. All while even giving a nod to SOYLENT GREEN for how to make the best use of society. Wachowski’s doing grand social satire all in the guise of a simple Disney Princess fairy sci-fi tale… Well if you don’t like it, I’m sorry man, but I love thinking of something science fictiony in the eye of Jupiter! So cool. I love this in 3D! Wish SPEED RACER was 3D, I really really do! You also get 69 minutes of extras give you a nice taste of what went into this crazy sci-fi – Me, I wish this was successful enough to see the further adventures of Jupiter Jones, but that’ll never happen. Sigh. 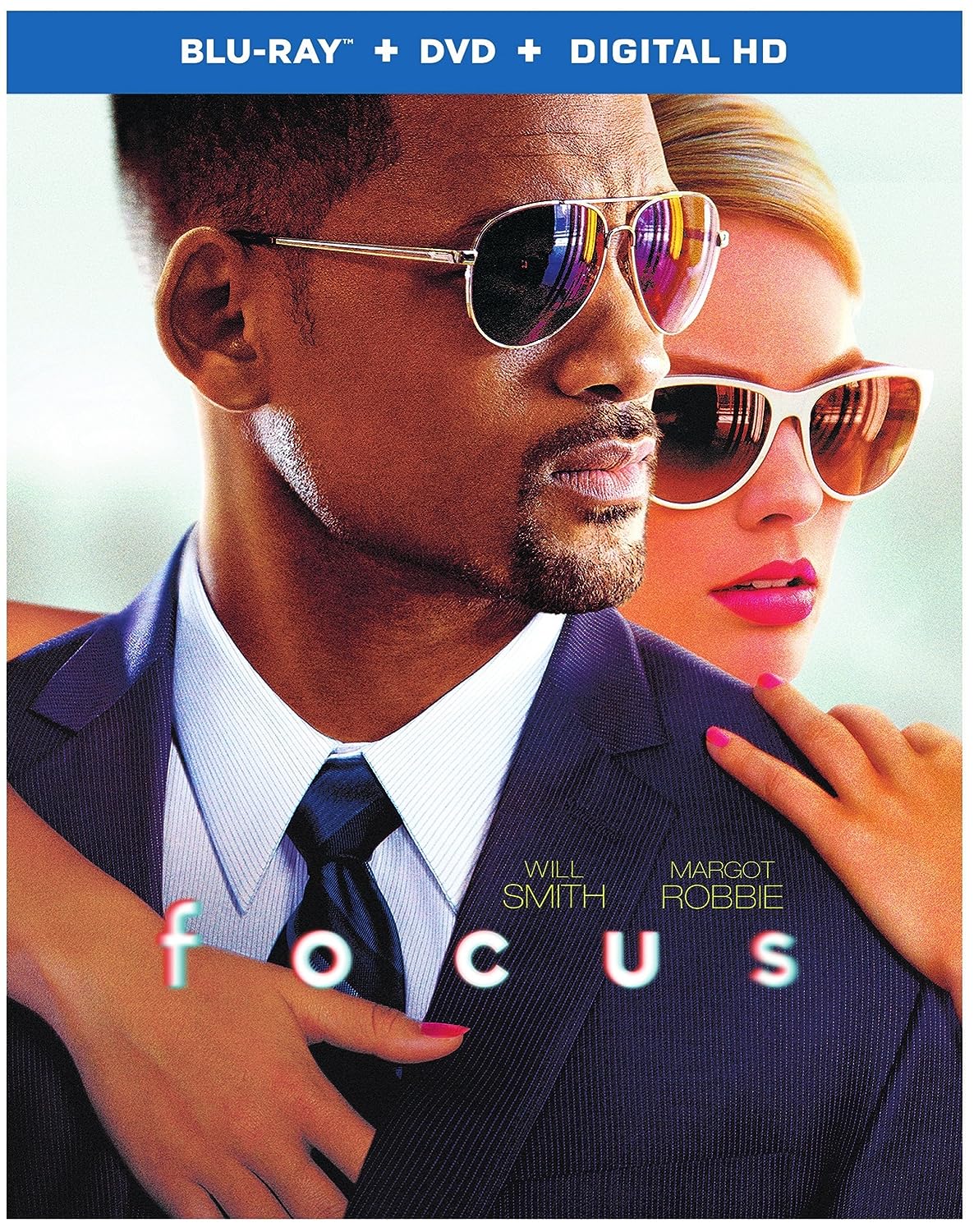 Margot Robbie and Will Smith are the reason the film keeps your attention, that and the twisty turny world of Con Men & Women working their angles. That said, there was a big chunk in the middle of this film where I just didn’t care about – and some things felt way way way too set up and telegraphed with triple underlining, so when big things happen, you know… that was that whole plan he explained earlier in the film so it’ll be ok – and I didn’t like having that twist spoiled by the film itself through clumsy exposition. There’s only about 31 minutes of extras on the Blu, 11 minutes of Deleted Scenes & an Alternate Opening, then ten minutes of conning and pickpocketing lessons, and then 10 minutes divided up between Will Smith and Margot Robbie. Ultimately, those two make the film a worthwhile experience, but there is some clumsy to the cons here. 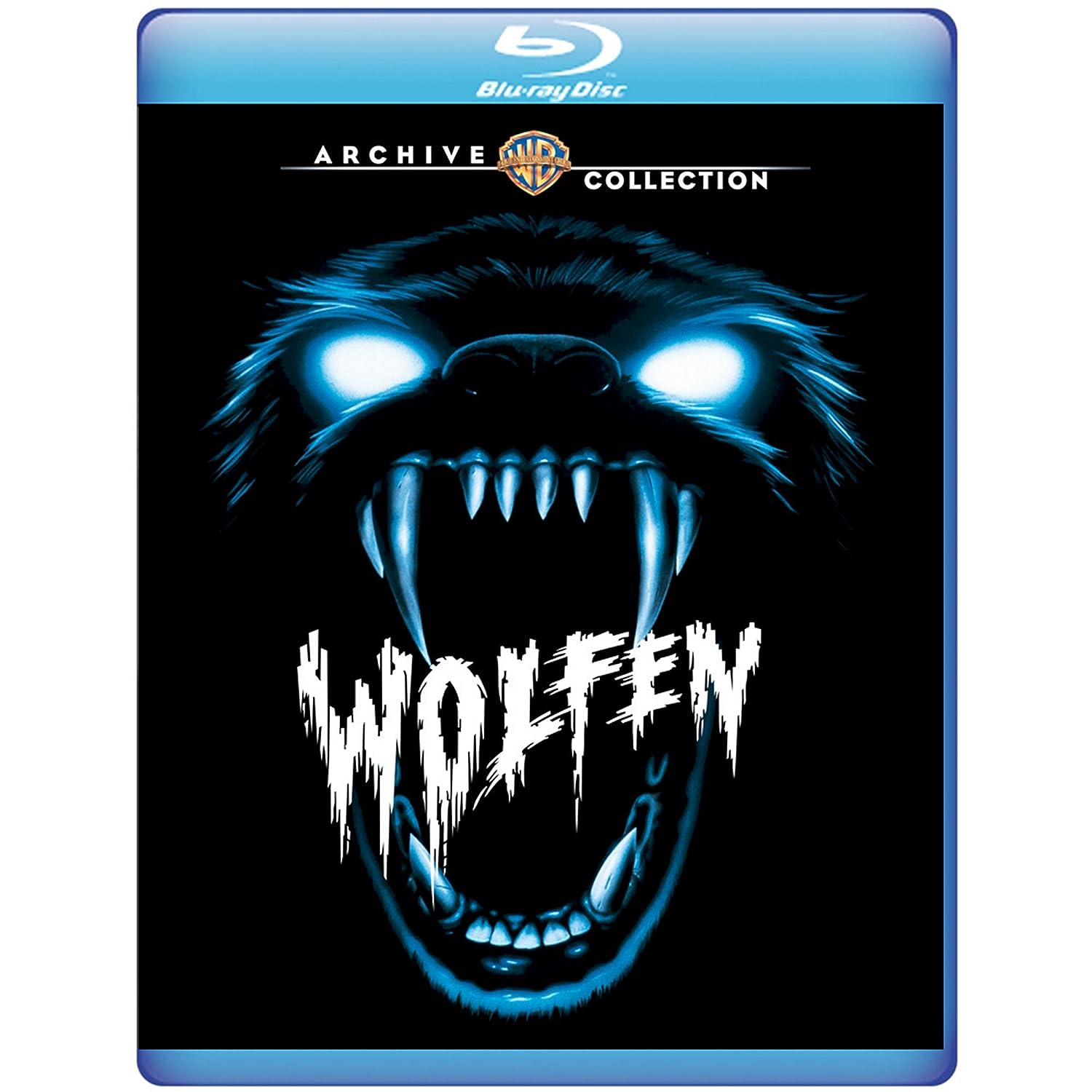 1981 was a spectacular year for Werewolf movies. We got John Landis’ AN AMERICAN WEREWOLF IN LONDON and Joe Dante’s THE HOWLING, but then there was also WOLFEN that starred Albert Finney, Gregory Hines and a crazy young Edward James Olmos! I liked the WOLFEN vision scenes which predate the usage of thermographic imaging on film popularized by PREDATOR. The film looks great on Blu, and it’s been way too long since I’ve given this one a watch, but the cast and the long tease of the wolves is nicely done. Plus, I love that James Horner score which definitely foreshadows his ALIENS score for Cameron! There’s no extras, besides a trailer… but you must complete your 1981 Trifecta of awesome Werewolf movies! Also – check out Tom Noonan in this! He’s always been creepy! 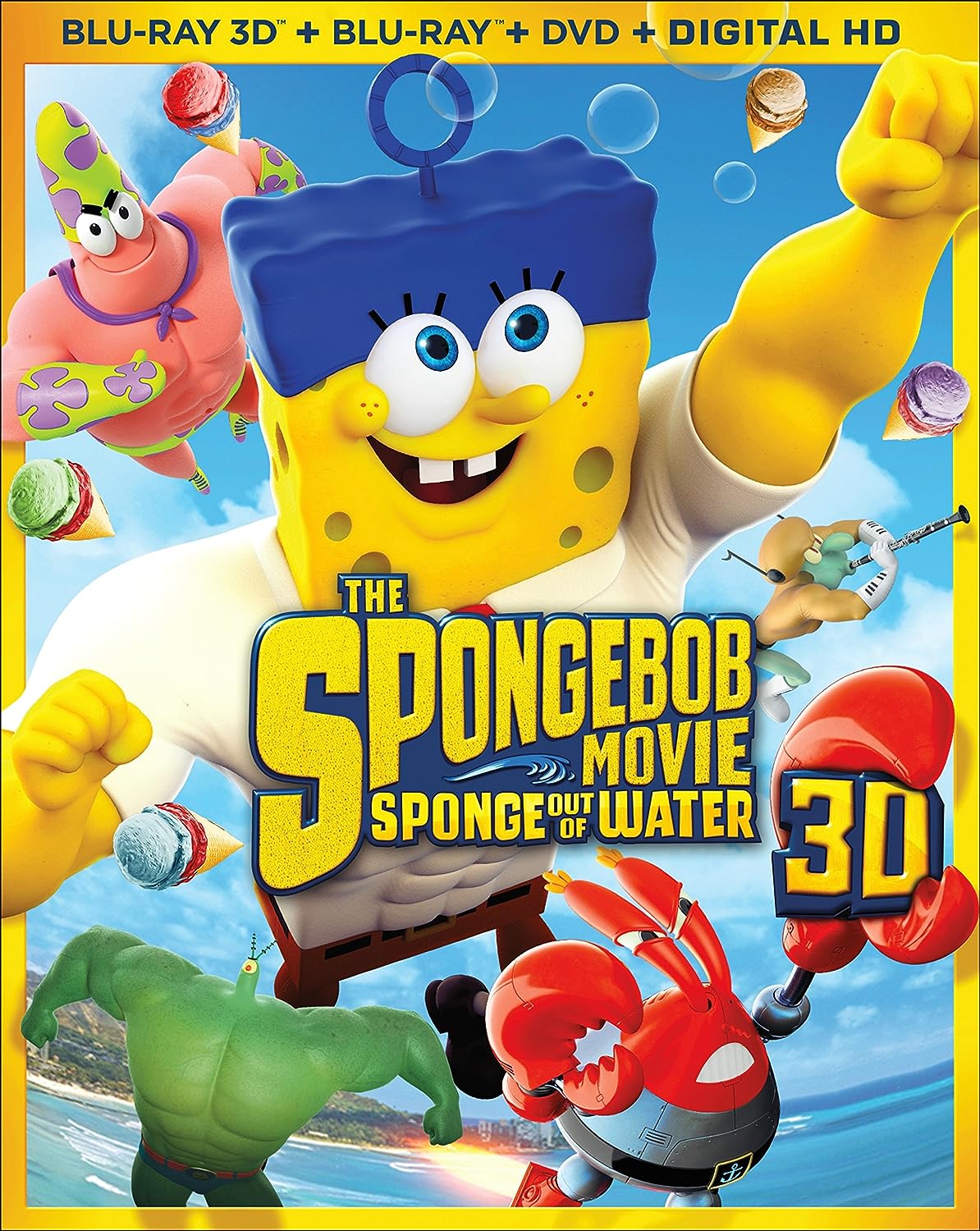 THE SPONGEBOB MOVIE: SPONGE OUT OF WATER 3D Blu Ray

Contrary to the way this film was sold, the vast majority of the film is the joyful loving 2D animation that we’ve come to adore from SPONGEBOB SQUAREPANTS, however… there is an extended sequence that has our beloved characters battling Antonio Banderas’ recipe stealing pirate in full CG 3D animated glory. AND the whole film is 3D on this Blu – and it’s kinda friggin awesome! Watching Bikini Bottom turn into a Mad Max Wasteland is just sort of a joy. Who knew what losing the secret formula for Crabby Patties would do? A similar thing is happening here in Texas due to the Blue Bell panic! It’s gotten so bad, politicians are passing open carry handguns and concealed carry on College Campuses! I tell you, only Blue Bell will restore sanity! I got hooked on SPONGEBOB due to my nephew’s love of it, but even as he’s gotten older – we still get a kick out of this! Because it’s really well done! 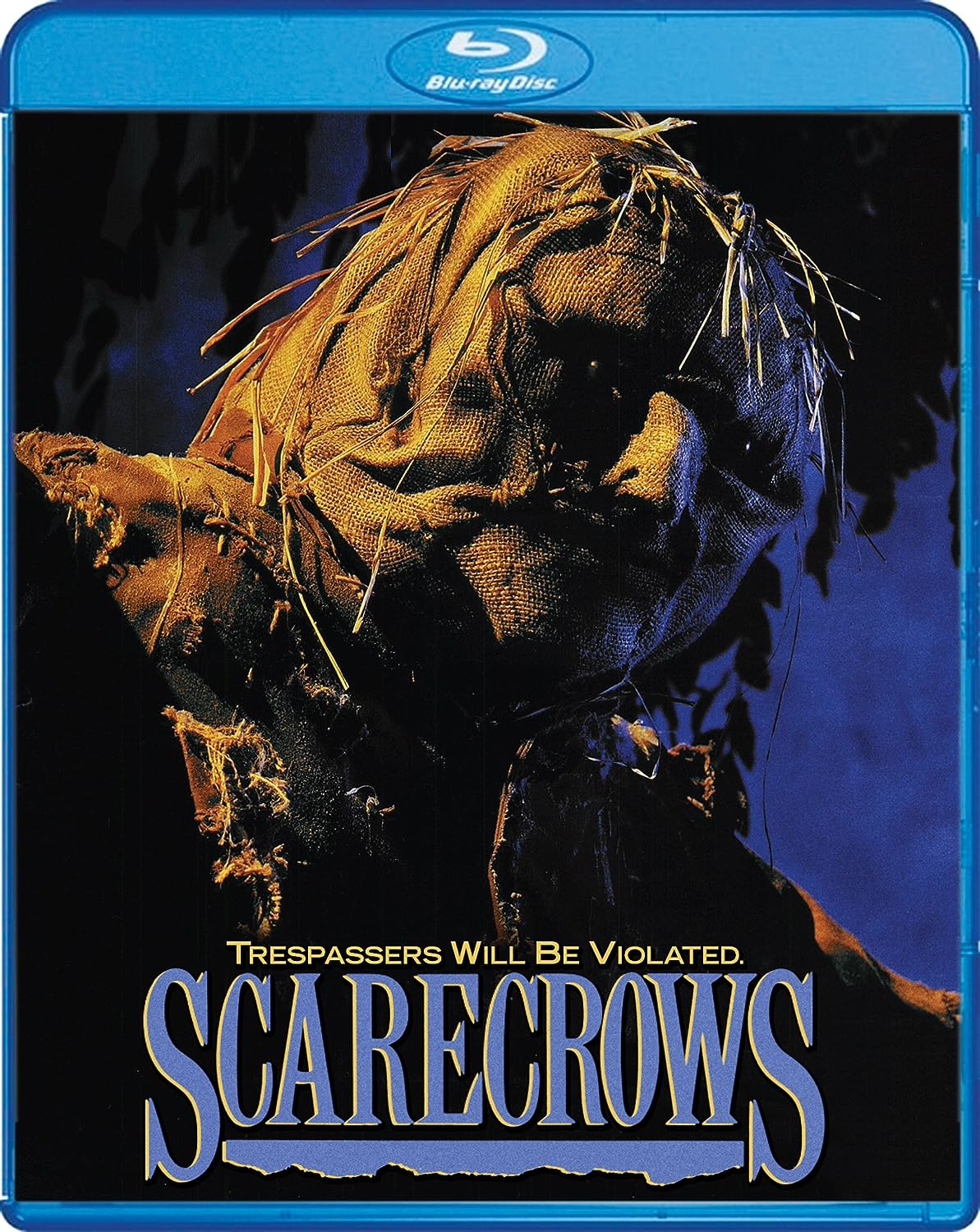 Made in 1988, this is one of them $3 million dollars gets dropped into a cursed cornfield of evil scarecrows and it’ll be the devil to get the money and run. Pretty much an acting yawner, except for really fun monster make up and practical creeps, which actually makes this a surprisingly fun flick. SHOUT really does find the jewels! This one is better than its cast, which is something oh too rare. Just good genre fun! 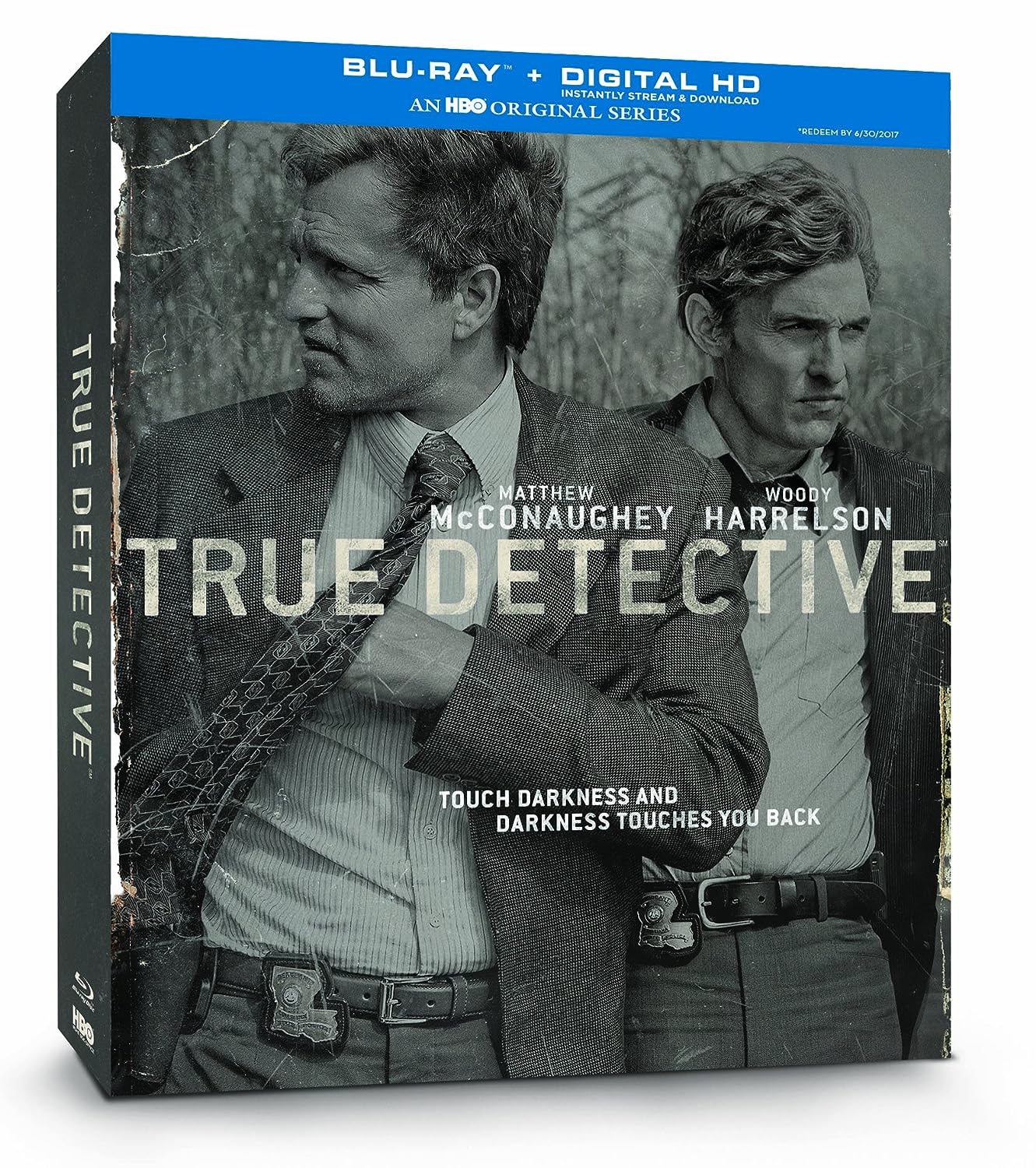 This first season of TRUE DETECTIVE was one of the great surprises of last year for me. I just didn’t see this kicking my ass the way it did. Starring Matthew McConaughey and Woody Harrelson, both at the absolute top of their games as Detectives on a case that just keeps getting creepier and scarier. Once the season takes it’s turn towards discovering the actual evil at play in this gothic page turning mystery… it just… so f’n creepy. The ultimate evil is something unexpected. The actor in question, turns in a performance that feels as creepy as anything Charles Laughton gave us – and in my world, that’s about as high a complement as I’ve got in my quiver. Now, the Blu features two episode commentaries on episodes 4 & 5, but not all. The Making of is just 15 minutes, but really really solid! You get 8 minutes with Matthew and Woody! 14 Minutes with Series creator Nic Pizzolatto and T Bone Burnett! There’s around 10 minutes of deleted scenes and then an INSIDE THE EPISODES thing where you get bts on each episode – this is a nice special feature! Overall, a great set from HBO to keep readily available in case you need to hit this case again! So great. 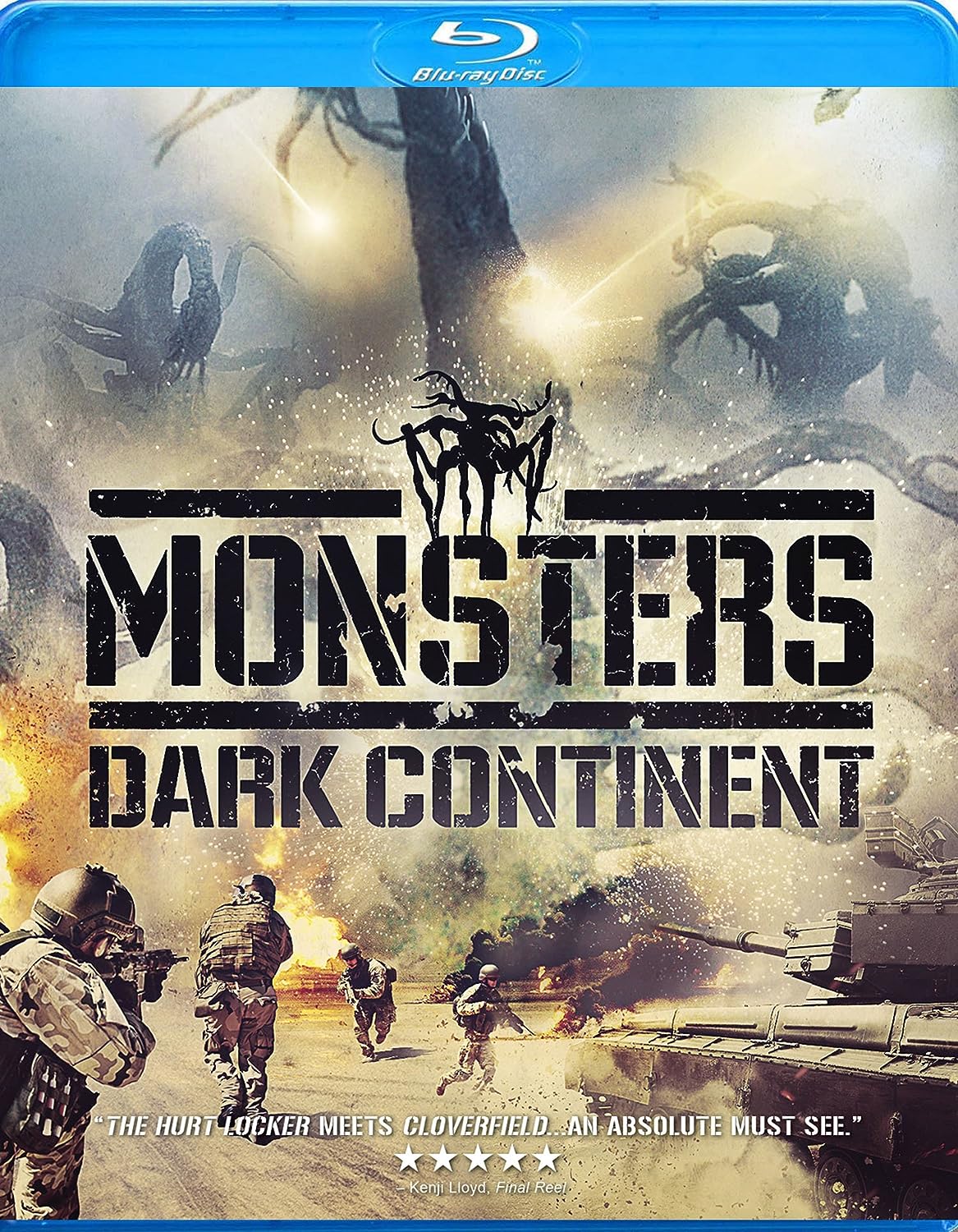 ”HURT LOCKER meets CLOVERFIELD” is a pretty good wrap up for MONSTERS: DARK CONTINENT – and as someone that has a great love for 1950’s-1960’s through to the modern day giant monsters attack movies, it’s really something to just look at a flick like this and think… wow, shit this amazing looking is what we jadedly yawn at these days? Put this in a time machine and release it to me when I was 11 and I’d be absolutely entranced by the wizardry of Giant strange crazy and hauntingly beautiful creatures loose upon Africa as the military shoots at them. But basically, that’s all there is. Gareth Edwards’ original MONSTERS was a better mix of character work. That’s pretty much totally missing here. Making the story a bit bland, even though you’ll have way more action with the MONSTERS than in the first film, you just won’t have characters to care about. Dammit, more work on the script could have made this a cheap little spectacular, instead… it is an almost there kind of flick! Hardly any special features, a short nearly 3 minute making of and a trailer. 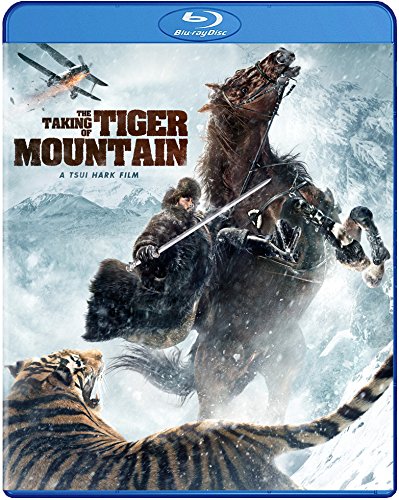 I’m bummed about this release. I’m a huge fan of Tsui Hark’s work. THE TAKING OF TIGER MOUNTAIN was a huge success and a very big deal in China. This epic was shot for 3D and just watching the 2D version, I’m dying to see how Tsui Hark handled the 3D. The framing suggests that it could really have been something spectacular. Alas. Instead, you just have to settle for an epic history lesson about post WWII China and some of the crazy action that took place there. This is a helluva tale. Also, this has a crazy cool framing sequence that helps make the hyper-stylized action feel like a half dreamed myth of reality. Perfect Tsui Hark material! If you like the kind of action from the first CAPTAIN AMERICA feature, this is playing in that era and with crazy heroics on display too! Very cool film!