New Star Wars rumors surface! Will the 2nd spin-off be a Western style story directed by either Favreau or Vaughn?

With most rumor-based stories you have to have a sliding scale of probability and hell of a fine-tuned bullshit detector. Let's see where this one lands, shall we?

The Schmoes Know guys dropped this rumor that the second, now Josh Trank-less, Star Wars Anthology film will be a western-influenced film that takes place before the events of A New Hope and features the rivalry between Han Solo and Boba Fett at its core. Their source claims that Lando, Chewbacca and Bossk are involved in the story and that the two directors circling the project are Jon Favreau and Matthew Vaughn. Oh, and they also say the third Anthology film will be a Yoda origin.

After checking my readings on this fancy rumor BS detector, I'm thinking that there may be something here... but that's because there's so many different pre-existing rumors all jumbled into one massive story.

Jon Favreau and Matthew Vaughn were both high on Disney's list to direct Episode 7, but didn't make the cut. Both adore the original films and I'm sure would be very eager to step into this galaxy.

The Fett/Solo connection has been rumored off and on since they announced these spin-off movies, so that's nothing new... however, I much prefer this tact than Lucasfilm doing a simple "Han Solo origin story."

We ran info from a source of ours a while back that one of the spin-offs would be a solo Yoda tale, so that's been out there, too.

My gut is telling me there's something likely there, but I doubt everything pans out exactly as the Schmoes guys have said. For all we know their source just pieced together a bunch of existing Star Wars rumors and tried to connect them all.

However, I think a Spaghetti Western style Star Wars movie where Boba Fett is Angel Eyes and Han Solo is Blondie would just be about the coolest goddamn thing I ever heard of, so maybe I just want it to be true because I'd love it so much. 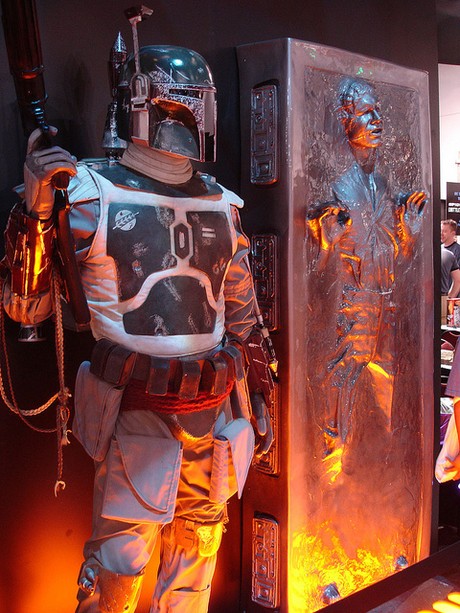