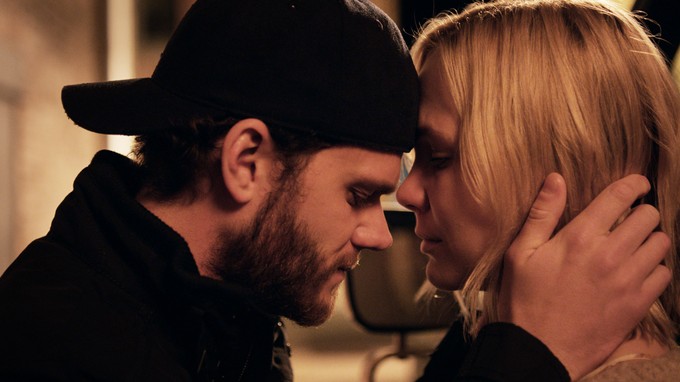 THE AUTOMATIC HATE is an unconventional love story that also crosses boundaries into family drama, psychological thriller, mystery and morality play. Extinguish any one of these aspects, and the film becomes something entirely different, but watching each thread untangle and weave its way into the thematic tapestry of the work is fascinating, and creates a film that is both challenging and entertaining.

Davis Green’s (Joseph Cross) pretty average life is disrupted one day by the arrival of Alexis (Adelaide Clemens), a captivating young woman claiming to be his cousin. Secure in the knowledge that his father is an only child, and this can't possibly be true, he first blows her off as confused or crazy (possibly both). But then curiosity gets the better of him, and he starts to dig, uncovering a chapter in his father’s past that has been kept hidden from him his entire life. An uncle he never knew about, cousins he never met, and a family divide going back decades. Davis and Alexis team up to learn more about the buried family history that has been kept secret from both of them; in the process, an intense, illicit attraction begins to develop between the two of them.

Continuing some of themes that Lerner first explored in GIRLFRIEND, he and co-writer Katharine O'Brien tread the path of examining complicated, taboo relationships that go against the societal norm. The fact that Davis and Alexis are cousins doesn't make their attraction any less genuine, and watching these characters deal with that realization and battle their growing feelings is fascinating, as is watching and examining our own reactions to it.

Equally fascinating is the dark secret that tore the family apart decades ago. As Davis begins to dig into his family’s history, he gradually learns more about the events that brought the relationship between his father and uncle to a crashing halt before he was born. The mystery presented here drives the film as much as the love story, and the two aspects play off of and feed each other quite well, drawing many opportunities for tension and challenging moments.

By far, one of the highlights is Ricky Jay in the role of Joshua, Alexis’ father and patriarch of one half of the family. Joshua is an intense, intimidating character, and Jay throws everything he has into a stellar performance. It’s a role you might not immediately picture an actor like Jay in, but one that he absolutely owns.

The performance shines in an incredible scene where the entire family is finally reunited over dinner and the rapport built between Joshua and Davis’ father, Ronald (Richard Schiff), is fantastic. Schiff provides the perfect counterpoint for Jay, with Ronald being just as tense, but far more buttoned up. The two embody volatile, opposing forces, and watching them finally interacting for the first time in years is a painfully awkward and enthralling experience. You really can't do much more than grip your seat and wait for the fireworks as they break the uncomfortable silence with a series of sharp jabs and barbs - a mere prelude to what will culminate at the end of the meal.

THE AUTOMATIC HATE is a film that confronts the viewer in unconventional ways, and stays with you long after the credits roll. Concepts of nature verses nurture, of societal conditioning and operating by one's own personal rules, of id and ego are at play throughout the narrative. Lerner and O'Brien craft a film that doesn’t fully resolve itself and come down on any one particular side, but instead, challenges the audience to consider something outside the norm and see where they stand.

CIRCLE plays like an extended episode of THE TWILIGHT ZONE. A clever sci-fi based morality play that asks us to examine some of the underlying flaws and dark corners of societal constructs.

Written and directed by Aaron Hann and Mario Miscione, the film focuses on a group of strangers who awaken suddenly to find themselves positioned in a circle around a strange device. The gizmo emits a deadly ray at regular intervals, killing one of their number upon impact. Through deduction, experimentation and a little luck, they figure out that they can control the direction of the beam through a gesture-based voting system, and that they are in full control of who the device targets when it goes off. The question then becomes who should live and who should die, as the group is slowly reduced, person by person.

It’s an interesting film that uses its premise to examine the uglier sides of society and human nature. How do you decide who should die first? Who should be kept alive? Are certain people expendable? How do you put your own life ahead of another human being?

All of these questions play a role in the 90 minutes that follow, along with the unfortunate biases, alliances and asshole behavior that human beings are all to capable of. It doesn’t take long for some of the members of this crowd to turn into complete and total douchebags, valuing themselves over other members of the group based on surface-level prejudices and assumptions. Fortunately, the biggest dicks of the group reap what they sow, and soon find themselves at the receiving end of the death ray simply for being asshats. It’s kind of the scariest reality show ever - one that actually gives power to the contestants and allows them to manipulate and take out their peers on a massive scale.

The film’s flow is a little rocky – the short runtime doesn’t give the characters much room to breathe and react before launching into the more sociological elements of the story, so it feels a little rushed as it builds steam in the beginning. But it offers up a lot of food for thought as it examines just how we might wield ultimate power in the face of self-preservation. Nobody in this group wants to be here or wants to die, but watching the various ways the characters handle their circumstances is as interesting as the notion itself. And though the film often feels more like a sketch and less like a fully realized concept, it sets up a thought-provoking premise and leaves a lot of room for discussion and examination.