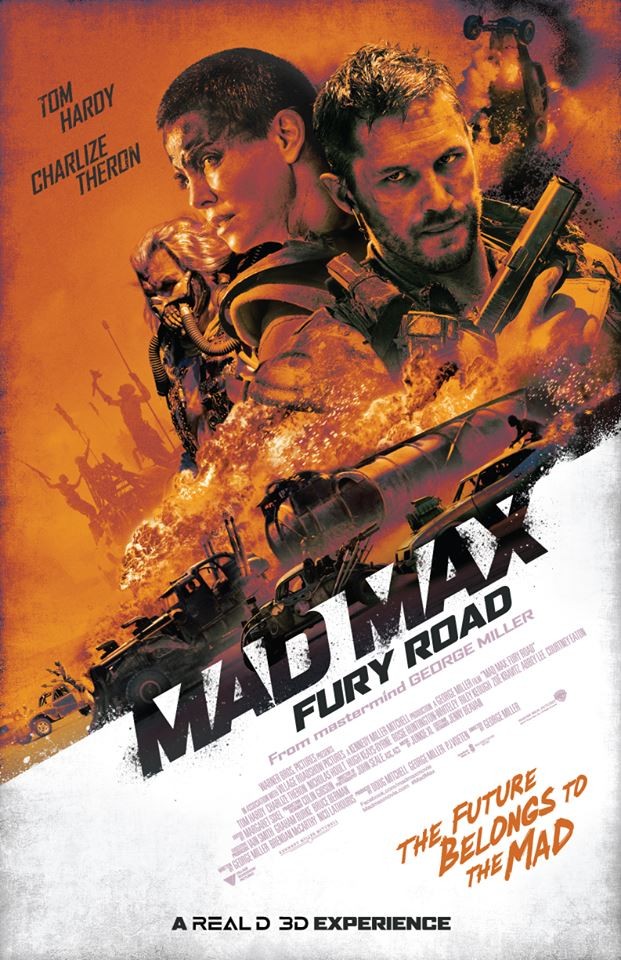 MAD MAX: FURY ROAD is an instant action classic.  It's snorting powdered adrenaline off the hood of a Corvette (or V-8 Interceptor, if you please) driving a hundred plus miles an hour in heavy traffic.  It’s all the best stuff of RAIDERS OF THE LOST ARK, THE ROAD WARRIOR, and DIE HARD wrapped neatly in a bow, and dropped in our laps like a frigging Christmas present 7 months early by Santa George Miller himself.  I’ve been watching movies all my life, and I know it in my marrow when a great, great film kicks in the front door, and MAD MAX: FURY ROAD knocks it clean off its hinges. This film will be talked about for years – decades – just as THE ROAD WARRIOR was. Too much hyperbole? Yeah, I don’t give a shit. This is one of those reviews where those of you sitting in the first three rows will get wet.  I can’t wait to see this thing over and over and over again, because until STAR WARS (maybe), this is the best that science fiction action cinema gets.

But even through the balls-to-the-wall action, George Miller is a master craftsman of story.  Each action beat pushes our heroes and villains through the plot efficiently, with no fat, and the emotion and power of FURY ROAD is rich and thick.  Even during the most incredible chase sequences in modern action history, you savor this movie.  You sip at it, like wine.  Miller uses everything at his disposal – amazing stunt work, cinematography, music, storyboards – to tell this story and if Hal Needham were alive to see this, he’d kiss George Miller full on the mouth for what he’s done here. 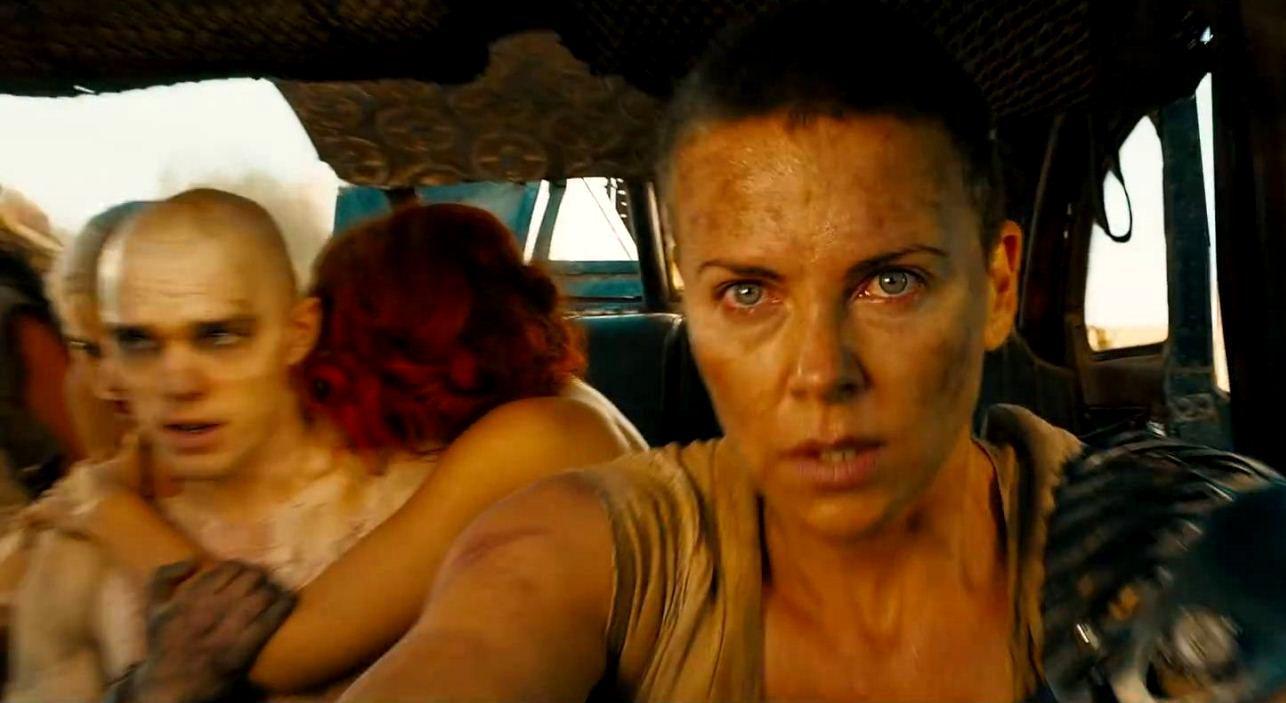 Plus, we get the best action heroine since Ripley strapped on the power loader.  Charlize Theron’s Furiosa is a no-nonsense badass, driver of the big rigs, who takes no prisoners and gives no fucks. Her story is as compelling as Max’s (Tom Hardy) and no less emotional, and I’m totally game for any more films with this character.  This is the kind of performance that tends to be wrongly forgotten during awards season because we don’t get any long soliloquys about life or love, or any awards-bait moments.  Instead, Theron embodies the character heart and soul, and anything that Miller’s team throws at her, she chews up, spits out, and asks if that's all they got. It’s a masterful performance.

If Tom Hardy suffers by comparison, well, Max gets it pretty rough in FURY ROAD. Captured by Immortan Joe’s (the magnificent Hugh Keays-Byrne) War Boys, to be used as a blood transferor (a “blood bag”) for his warriors, Max spends much of FURY ROAD muzzled and shackled to Nux (Nicholas Hoult), a young War Boy who believes he is destined to die in battle at the bidding of Immortan Joe.  Joe is a god to his starving, thirsting people, giving them spare moments of hope, while keeping all the water and the food for himself and his closest followers inside his impenetrable Citadel.  He also has several wives, claimed as property, who he gives names to like Fragile (Courtney Eaton), Capable (Riley Keough), and Splendid (Rosie Huntington-Whitley).  But when Furiosa betrays him, Joe sends a war party to get her and retrieve her precious cargo, and Max goes along for the ride.

Action, instead of dialogue, defines character in FURY ROAD. We see Furiosa as a brave warrior with compassion and skill, who harbors a weakness in this shattered, forlorn Wasteland – she hopes.  Nux’s journey goes from fierce loyalty and passion, to disillusionment and betrayal, and then to valor.  Nicholas Hoult is a terrific addition to this universe, and does grand work here. Tom Hardy fills Mel Gibson’s shoes with ease and grace – indeed, he IS Max, and we can see the war in Hardy's face, between Max’s pragmatic will to survive and the cracks in the armor that show Max wants, needs, to care about something again.

Co-writers George Miller, Brendan McCarthy, and Nick Lathoris do the best kind of world-building in FURY ROAD: they don’t overexplain things, or stop everything to reveal a character’s backstory.  This is plot as propulsion for the cinema on display here, and because they’ve stripped down the world to its core elements, it has the opposite effect – the Wasteland feels as lived-in and as expansive as our world.  From the costumes, the vernacular of the language, and the striking, rich cinematography of John Seale, the Wasteland is as solid as Middle-Earth or the many worlds of the STAR WARS films.

Film editors Margaret Sixel and Jason Ballantine are focused on maximum impact, but never allow the frenetic energy to become overwhelming or incomprehensible.  FURY ROAD has a remarkable sense of geography and space.  Tom Holkenborg’s score (he may be better known to many as Junkie XL) is a pounding, rhythmic, cacophonic, melodic explosion of sound and fury, and this is the first score of the year that I positively have to own.  I’m just afraid to play it when I drive, because I’ll probably cause a massive pile-up on the freeway. 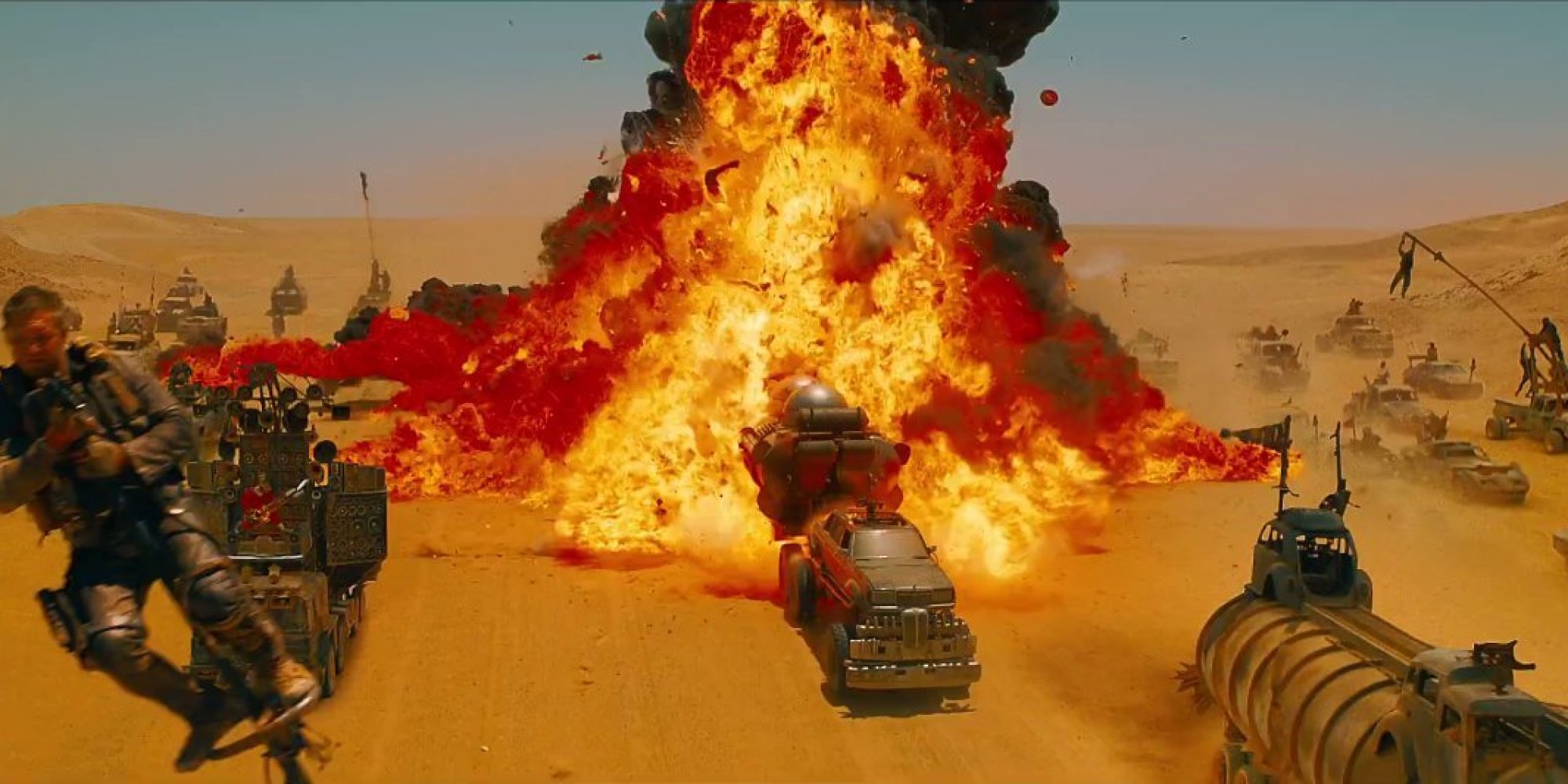 There are a lot of themes that resonate through FURY ROAD – the way Immortan Joe keeps his people enslaved to a false hope through his own deification while he plunders and hordes away all his water and food, to the strong feminism of Furiosa and other characters.  But George Miller doesn’t stop the movie to point out all the allegory and symbolism. He’s having way too much fun for that.  The chases are spectacular, with stuntmen doing crazier and crazier things onscreen.  Yes, there is CGI, but it’s used to augment the surroundings, and it doesn’t interfere with all the amazing stuntwork.  MAD MAX: FURY ROAD is relentless. It stops to take a breather a few times, but it never stops for long, and those moments of respite are enlightening and emotional.

We care for these disparate, and desperate, people; for Max, Furiosa, for Nux, for the wives, even for Immortan Joe in his way.  This is a world gone mad, and hope must be stamped out as a distraction, a luxury in a cruel world of fire and dust and razorwire.  For George Miller, hope and optimism are rebellious acts, that scream through the darkness that all will find the light again.  When we see that hope blossom, like a leaf of green in a devastated world, it’s overwhelming, cathartic, and exciting.  MAD MAX: FURY ROAD is pure, unfiltered, triumphant cinema.  You can taste it in your mouth when it’s over – the grit, the gasoline, and all the guts and the glory.  This is one of the finest action films ever made.