Rest In Peace Lord of the Rings Cinematographer Andrew Lesnie 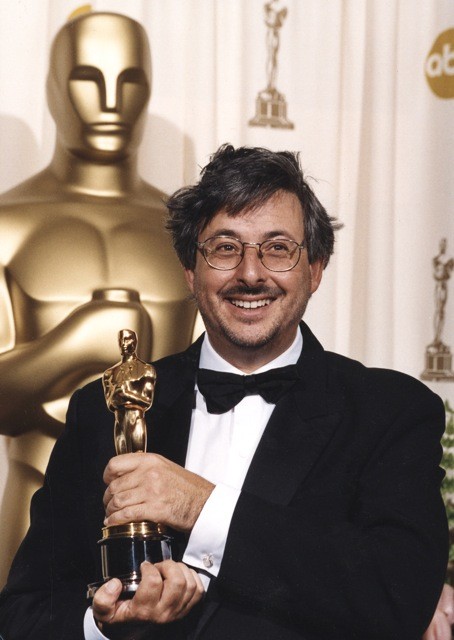 Hey, guys. Quint here. Andrew Lesnie's legacy among film fans is immeasurable. As director of photography he flawlessly created the storybook feel of the Babe films, helped us feel the down under dread with the cool, underseen Aussie killer croc movie Dark Age and the lonely isolation in the flawed, but close-to-great adaptation of Richard Matheson's I Am Legend. Throw in his work on Rise of the Planet of the Apes and his many outstanding TV and indie film credits and you'd have someone of note with just that.

However, we're not even into his A-list credits. The collaboration that would define his career began just after he wrapped up with George Miller on the fantastic Babe: Pig in the City. A young filmmaker from New Zealand needed a hand creating a whole new fantasy world unlike anything that had ever been seen in film before and Andrew answered the call to arms. 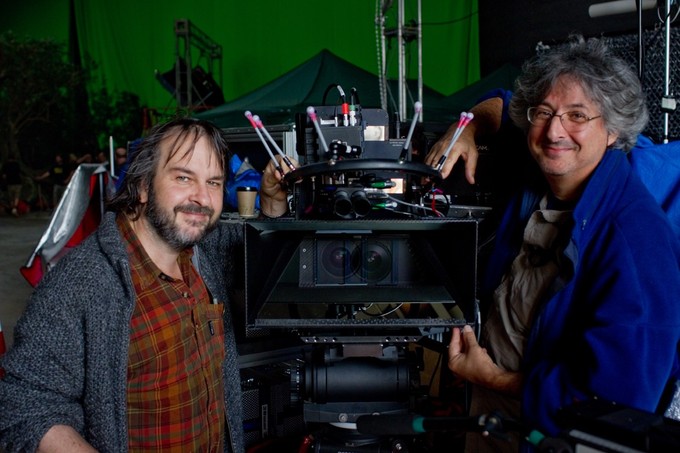 Andrew Lesnie and Peter Jackson's work together on the Lord of the Rings is all time stuff. They pioneered digital color timing with those films, but none of that would have mattered if Lesnie's photography was anything less than brilliant in the first place. Digital technology was still finding its feet, but the way Lesnie lit the sets made you believe you were in Middle Earth, on the journey with Sam and Frodo. Gollum works so well as a digital effect because of about a million different people at Weta Digital, but all that would have been for naught without Andrew's work behind the camera.

Word reached me via Twitter that there was a rumor floating around the Australian tabloid press that Andrew had passed away. I hoped it wasn't true, but I got it confirmed from mutual friends of ours and it hit me pretty hard.

Lesnie worked with Peter on Rings, Kong, The Lovely Bones and the Hobbit films. I was lucky enough to have spent time on the sets of all those films and one of the constants throughout the last 12 or so years of my trips down to New Zealand was that quietly brilliant Australian goofball. 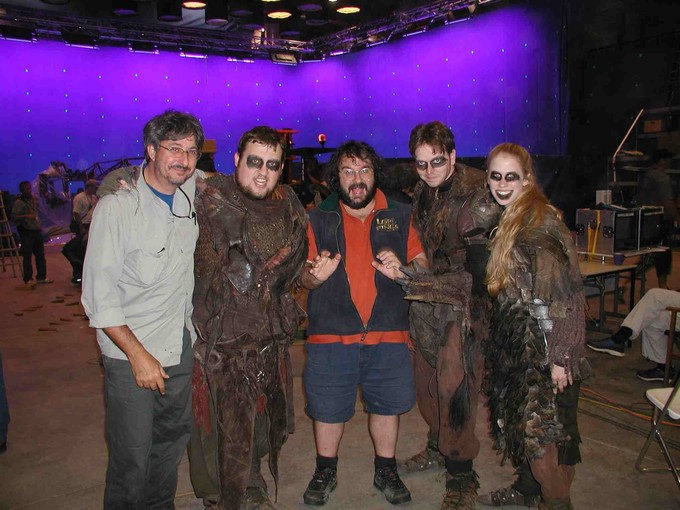 That picture above was taken during my first trip to Wellington in April of 2003 when they were kicking off the pickup shooting for Return of the King. It was my first time out of the country for real and I was more than a little nervous visiting this team that I felt like I had gotten to know thanks to the crazy thorough making of docs on the extended edition of Fellowship.

Andrew Lesnie wasn't just some guy behind the camera to me. He was THE Andrew Lesnie and I was already in awe of his work. Any fanboy awkwardness was null and void the second I met him. I called him a goofball above and that's pretty much how I was introduced to him. The man had a good heart and a sweet disposition, which made the little mischievous glint in his eye all the more endearing.

He was always quick with a joke and even when he could have (and probably should have) been stressed out, he was always a light presence. You can only get that sort of ray of sunshine, que sera sera calm when you know your shit and are confident in your collaborators.

My memories of Andrew almost always involve him bullshitting with me between takes, asking about Austin or telling me about his work on other films, and then a sheepish hand-caught-in-the-cookie-jar smile when 1st AD Caro Cunningham would call out his name, signaling it was time to get to work.

It's funny. I've tried to recall specific wisdom he imparted or the details of the hundreds of stories he told, but all I can grab on to right now is the way he made me feel. I don't know if I'm going senile or it's just the way my brain is processing his untimely death. He was the kind of guy that could break the tension with a simple funny face or make you feel special and part of the family with a simple quip or pat on the shoulder. Andrew had a special talent for making the people around him smile and feel good and I know I need that right now, so perhaps that is why I'm only able to focus on his presence right now.

I do remember a particularly brutal day while filming on location. Rain came in, everybody on the crew was miserable, cold, wet and tired. We were one location away from heading to the South Island where everybody would get a free day in Queenstown, one of the most relaxing and amazingly scenic places in New Zealand (which is saying something). But we were stuck shooting the seemingly endless Warg chase from An Unexpected Journey. This sequence shot in pieces all over New Zealand and while exciting in the finished film was simply dwarves and Gandalf running from one spot to another for each shot.

The crew was eager to get it done and head down South, but the weather not cooperating delayed us. The mood wasn't exactly dour, but you could feel the change in atmosphere. Lots of downtime on set, waiting for the clouds to part enough to match what they had just shot... it just kind of felt like a drag.

I was still happy to be there, naturally, and was going around snapping pictures when I came across Andrew. He smiled, told me to get my camera ready, turned around and then this happened: 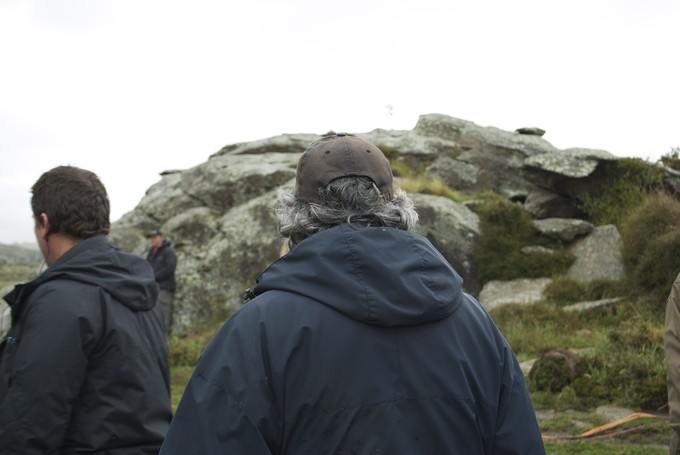 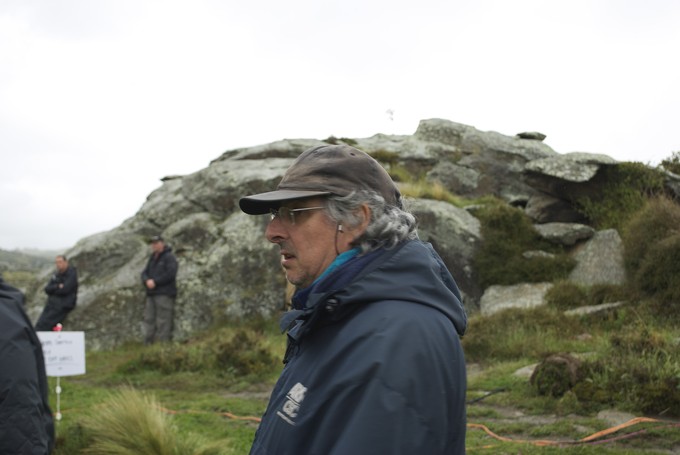 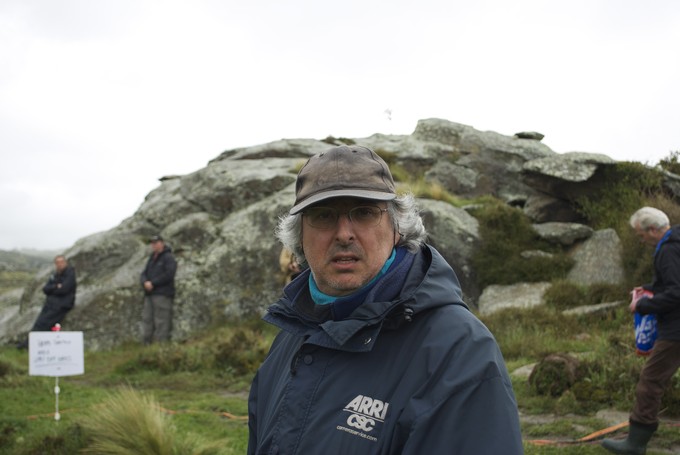 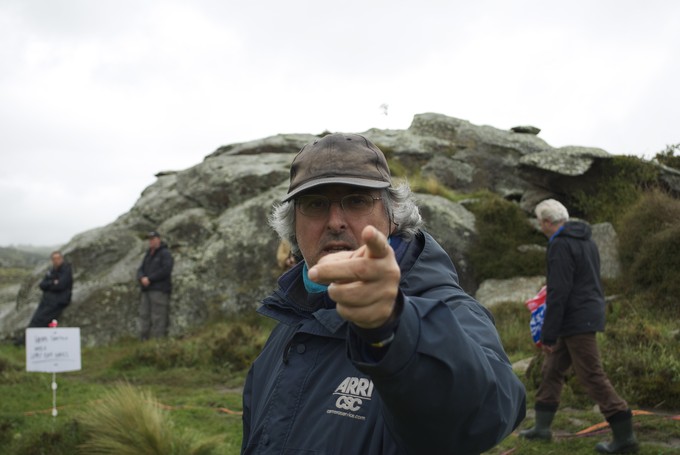 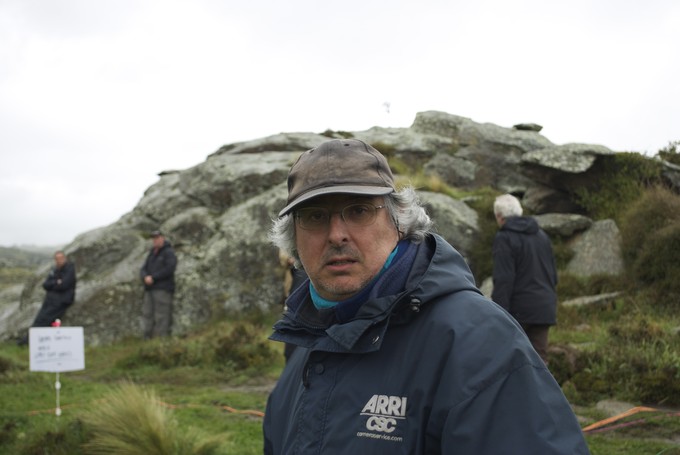 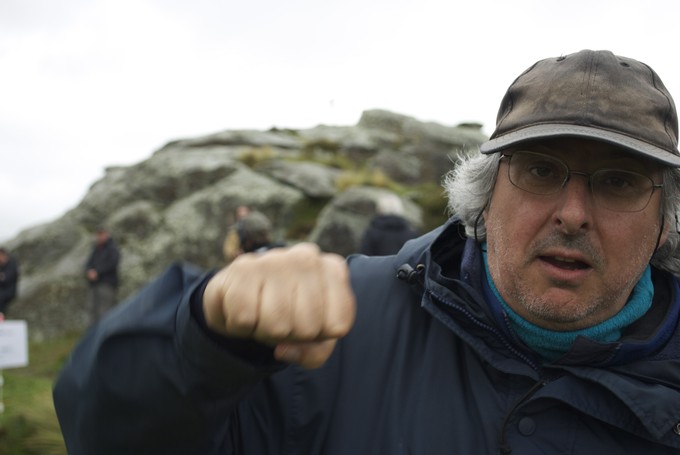 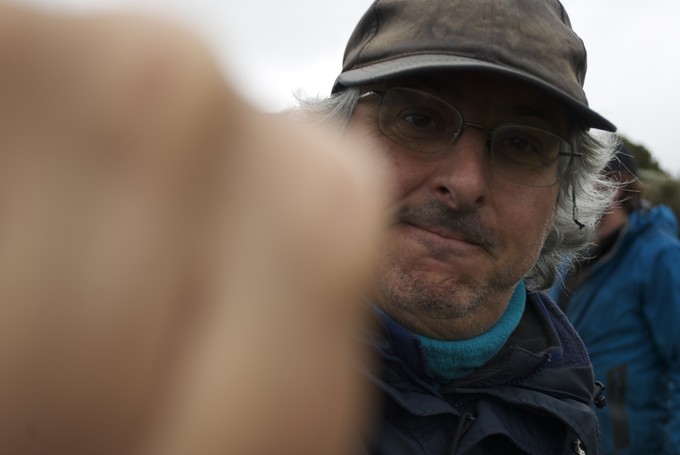 A few of the previously grumpy crew members saw this and laughed and just like that the tension was broken.

He did that all the time. Andrew would always keep people from taking themselves too seriously but all the while being the consummate professional and delivering nothing but the best images.

Here's another picture I got of him being goofy with one of the camera guys trying to use the old the cinematographer's trick of using his fingers/hand to measure light (something Spielberg collaborator Douglas Slocombe was famous for): 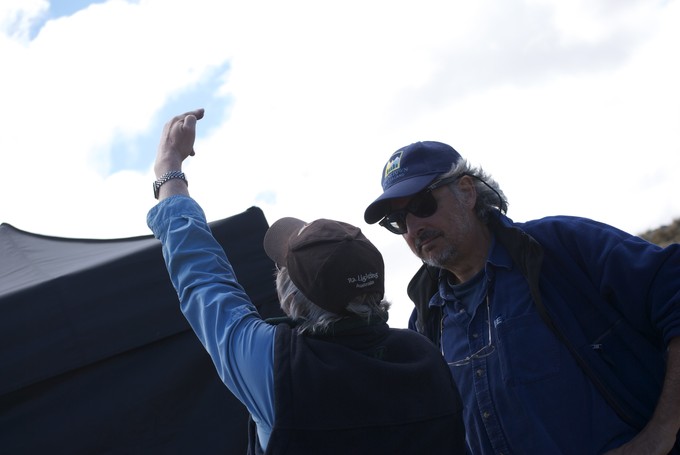 As you can see, both men are very underlit. I never claimed to be the great photographer here! If Andrew had snapped that shot it'd be immaculate.

I don't think I've ever met anybody would say a negative word about Andrew. He was a great DoP, but he was an even greater man. Kind, loyal, thoughtful, funny and dependable. The fact he was a genius with a camera on top of all that is almost unfair to the rest of us schlubs.

I'll miss him as a friend and as a cinephile. We're missing out on at least a couple decades of gorgeous cinema thanks to that asshole with the scythe and love of chess. Andrew was one of the good guys in this world, but if I know him at all I'd guess he'd laugh off this heartbreaking news, crack some inappropriate quip and then look sheepish as Caro sing-song calls his name (Annn-dreeewwwww) as a not so subtle hint to get back to work. 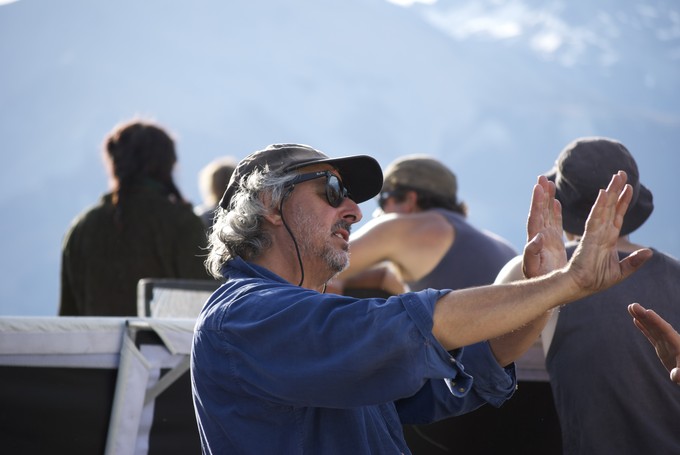 Why don't we leave off with some pics of Andrew and some of his gorgeous work? I highly recommend throwing in the highest of definition version of any of his films and really pay attention to his photography. It's a great way to pay tribute to his talent. 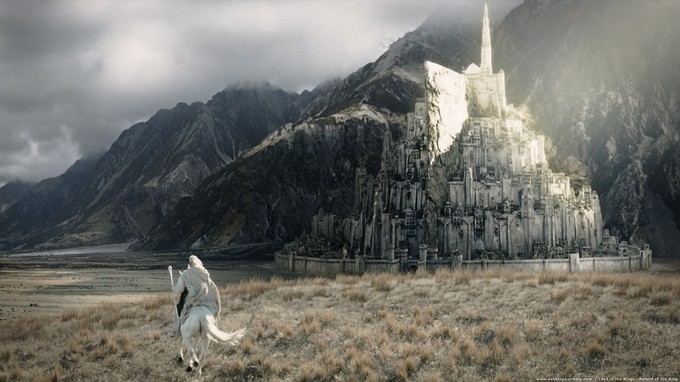 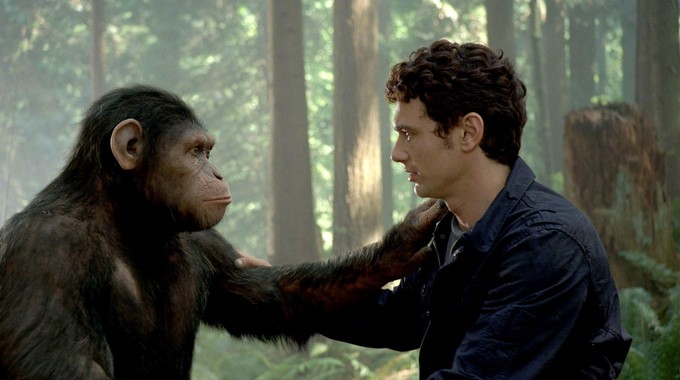 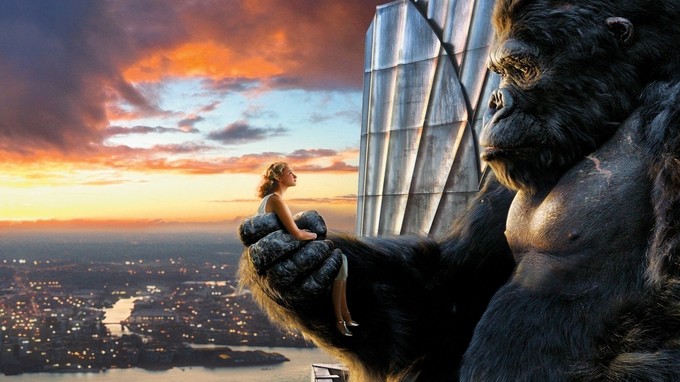 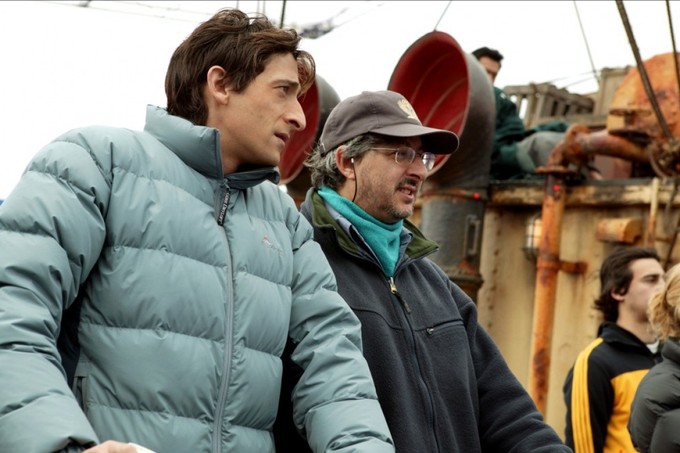