Copernicus Gets The Scoop On The Death Star Planet in ROGUE ONE Straight From The Horse's Mouth!!

In response to my article calulatin’ and speculatin’ on the 2016 STAR WARS film ROGUE ONE, I got one of the coolest emails I’ve ever received.  It was from John Knoll, the Executive Producer and Visual Effects Supervisor on Rogue One.  John Knoll!!  He’s a household name in my house.  As an ILM superstar, he’s overseen the visual effects on tons of movies we all love.  He and his brother invented friggin’ Photoshop.  And of course, relevant to this story, he had the idea for ROGUE ONE.

Here’s the first part of his email…

I read your AICN article with a great deal of amusement.  Thank you for that.

In the article, you write:

“It is entirely possible some artists at ILM just came up with what we saw in the teaser for the “wow” factor, and didn’t put a lot of thought into it.  And of course STAR WARS has always been space fantasy.  But I hope the powers that be have thought it through.”

I assure you we did discuss the magnitude of the cheat at some length.  I'm from a family of scientists and engineers, so I assure you this kind of thing doesn't happen by accident, at least not on work I'm supervising.  Some of us at ILM consider our unofficial slogan "We overthink it so you don't have to”.

He then walked me through some of the previsualization renderings they used in the teaser.  They started with the Death Star orbiting a planet the size of Earth.  The top view is what the camera sees, and the bottom is a side view.  The planet started out as 8000 miles in diameter, and the Death Star 100 miles.  The problem is that the Death Star intersects the planet. 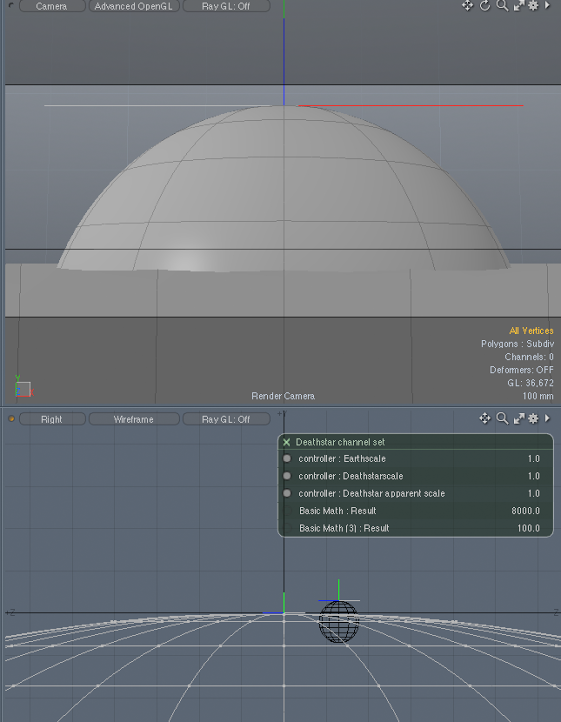 So to get around that, in Mr. Knoll’s own words they, “cheated a bit.”  Indeed, as I deduced from the math, it was a moon and not a planet.  They made it the size of Ceres, about 590 miles in diameter.  Ceres is the largest asteroid in our solar system, and in fact we have a spaceship visiting it right now!  NASA’s Dawn mission went into orbit around it, and is using its ion engines (just like in TIE fighters) to edge ever-closer.  As I pointed out in my Science of STAR WARS article — we are living a real-life version of EMPIRE STRIKES BACK — we have an ion-engine driven spacecraft, with giant solar-panel wings, exploring the asteroid belt!  And while it hasn’t found any space slugs, it has found some mysterious white spots.  You can see one of them in this majestic image (or follow this link for a cool animated gif). 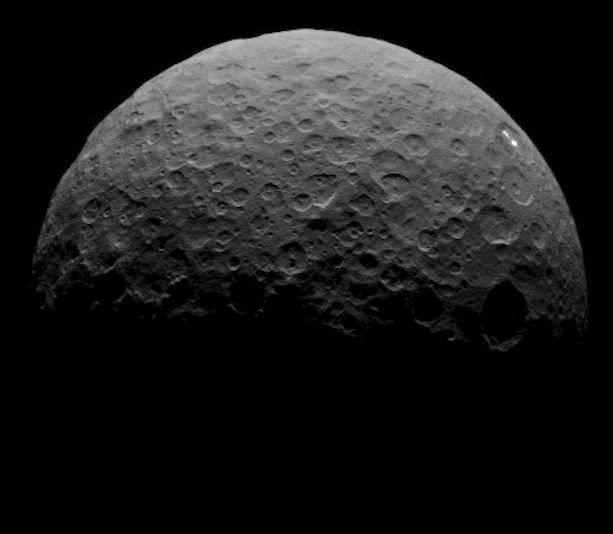 For that ROGUE ONE teaser shot, there is one big problem with using a moon instead of a planet, which Mr. Knoll conceded, “I'm aware that a moon this small would have to be ultra dense to have a surface gravity sufficient to hold an atmosphere as depicted, and that's probably the biggest cheat we did.”

The second thing they did was to assume they were using a long lens.  Indeed, I had basically assumed the same thing in my guess at the angular size of the Death Star.  I didn’t write that into my original article, because it was already running long, but I did point it out in the talkbacks.  A long focal length magnifies the subject and decreases the field of view, which makes the distant thing you are shooting look bigger.  You can see the effect in this photo of the moon by photographer Craig Silltoe. 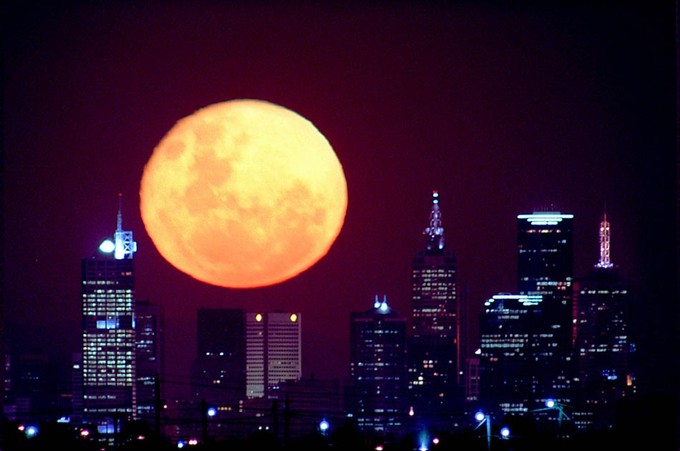 For the teaser they gave the camera a 17 degree field of view.  When you add the effects of the long lens and the moon-sized body together, you get this: 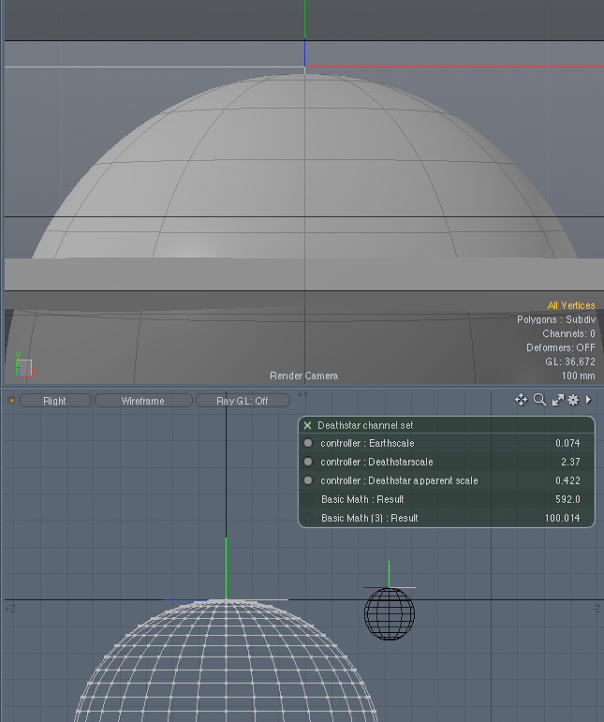 Great, now the Death Star is no longer inside the planet.  But how far away is it? Back to Knoll:

In your discussion about orbits, you mention how much drag there would be if the Deathstar were that low.  Indeed you are correct, but we're saying the Deathstar is not in orbit.  It's well established in the Star Wars universe that "repulsorlifts" (the antigravity suspensors that let Luke's speeder hover) are low power consumption devices (since Luke parks it hovering) and inexpensive (since they use repulsorlifts in all kinds of things).  The Deathstar is hovering over this moon.

What he’s referring to here is that if you have two celestial bodies side-by-side, they will just smash into each other due to gravitational attraction, unless one is in orbit around the other.  But in this case they are using artificial means to keep them apart (as I guessed, since they have force fields and tractor beams).   That’s actually kind of cool, and well thought out, even if repulsorlifts give you a little too much of a “get out of physics jail free” card for my taste.  I know, I know, these movies have wizards and machines that can destroy a planet.  Shut up, we’re nerding out here.

But what about tidal forces?  Knoll adds…

We're aware that tidal forces could do a real number on the Deathstar (and our moon for that matter), but the Deathstar has artificial gravity and is made from very strong materials.  The Empire may not be worrying too much about ecosystem damage from that close pass.

In trying to picture this in my head, I think he means that the moon is rotating under the Death Star (hence the pass), but the repulsors are on the Death Star itself.  I just love the fact that a bunch of ILM people are having these kinds of conversations and thinking through the consequences!

There was a great deal of discussion about these cheats, but ultimately we decided that this teaser can be thought of like an animated movie poster and we could cheat for dramatic purposes, the kind of artistic license often taken on movie posters.

Anyway, yes, the powers that be have indeed thought this through and we cheated deliberately.  You caught us!

That’s the sentiment I express frequently in these articles.  Do what you need to do to tell the best story.  But think it through, and follow through on the consequences.

Another purpose of these articles is to use movies as a jumping off point to tell cool stories about real science.  So let’s see if our ROGUE ONE moon really could have an atmosphere. Yes, I’m aware the EMPIRE STRIKES BACK already has an asteroid with an atmosphere when it shouldn’t have one, and a slug on a spaceship diet to boot.  Don’t care.  Ridiculousness like that does not get grandfathered in!  This is something we can calculate, and I love things we can calculate!

Of the nearly 200 moons in our solar system, only one has an atmosphere — Titan.  Titan has a mass of about 1023 kg, or 2% that of Earth.  Let’s call that the minimum mass we need to retain an atmosphere.  Using the volume of a sphere with the radius of Ceres we can calculate the density the ROGUE ONE moon would have to be to retain an atmosphere:  about 29,000 kg / m3.  Compare that to the density of Earth, 5,500 kg / m3, or even iron:  7,800 kg / m3.  Even a pure uranium planet wouldn’t be quite dense enough:  19,000 kg / m3.  No element on the periodic table under normal conditions is dense enough.

It is even worse than that, because the other variables controlling the retention of an atmosphere are temperature, and the atomic weight of the gasses in the atmosphere.  Titan can only keep its atmosphere because it is cold out at the orbit of Saturn.   These factors are why the small, rocky, inner planets have either no atmosphere, or only ones made out of relatively heavy molecules.  They can’t retain light gasses like hydrogen or helium, because at high temperatures these gasses can move near the escape velocity.  But the gas giants can keep them, because they are cold (making gas speeds low), and massive (making escape velocity high).

But our solar system is only one of billions (in our galaxy alone).  For all of human history, it was all we knew.  But the last couple of decades has seen the discovery of hundreds of new worlds.

And in just the last few years we’ve gotten a glimpse at just how much the universe is a spectacularly freaky place.

One of my favorites of these new worlds is a planet around the pulsar PSR J1719-1438. It has a density of more than 23,000 kg / m3, so it could approach the densities we need!  But it is just crazy-insane.  If you know anything about astronomy, right now you are probably thinking:  what.. the.. hell.  Pulsars are neutron stars — what you get after a star goes supernova if it wasn’t quite massive enough to collapse to a black hole.  Neutron stars are several times the mass of the sun, but packed into about a fifteen-mile diameter — the size of a city.  How could a planet survive a supernova, but also become denser than anything on the periodic table?

The current thinking is that the planet actually started off as a star itself!  First the primary star in the system went supernova and became a neutron star.  Then the secondary star became a red giant, but then lost its outer hydrogen layers, leaving leaving a bare core of carbon and oxygen called a white dwarf.  This is our sun’s fate in about 5 billion years.  White dwarf stars are made of very dense degenerate matter, denser than anything on Earth.  They are the mass of the Sun packed into the size of the Earth.  But the white dwarf in the PSR J1719-1438 system was in a hellish environment — next to a neutron star.  The neutron star alternately sucked matter from the white dwarf and blew some of it away until what was left was something only a few times the mass of Jupiter.  Because of the low mass and the fact that fusion has stopped, it is now called a planet.  It is probably made of crystalline carbon — like diamond but much denser.  There is nothing like it on Earth.

I doubt the pulsar diamond planet could explain our moon in ROGUE ONE.  At least I hope it isn’t next to a neutron star.  But it does go to show you that the universe can be even crazier than science fiction has dared to be.

With the twin suns, gas giants, asteroid belts, and cloud cities, the STAR WARS universe the the gateway drug to astronomy for hundreds of millions of people.  But now we know orders of magnitude more about other solar systems than we did even just a few years ago in the prequel era.  And because of technological limitations, the Earth has usually had to stand in for other places in the STAR WARS films.  But now we can render entire worlds on the computer and even change gravity.  I hope this new era of STAR WARS pushes the bounds of the fantastic out to the edges of our new expanded frontiers of scientific understanding.