Ahoy, squirts! Quint here. I've known of Nick Marra's work for over a decade, but it was only when he made those amazing Jaws sculpts for KNB's Greg Nicotero that I finally put a name to his talent.

It must have been somewhere around the late '90s when I bought a small Quint bust and have had it proudly displayed front and center wherever it is that I call home. That was Mr. Marra's piece and the one that apparently got him working in the effects industry.

Marra has become so known for his ability to bring these pieces to life that he's started his own shop, appropriately enough called Nick Marra Studios. Visit their Facebook page here and get ready to have to pick your jaw up off the floor.

He's got a new movie geek piece debuting at Monsterpalooza this weekend: an incredible likeness of Yul Brynner's Gunslinger from Westworld. I couldn't pass up the opportunity to talk with him about it. Below we discuss his process and how this particular piece is different from the others he has done. Enjoy! 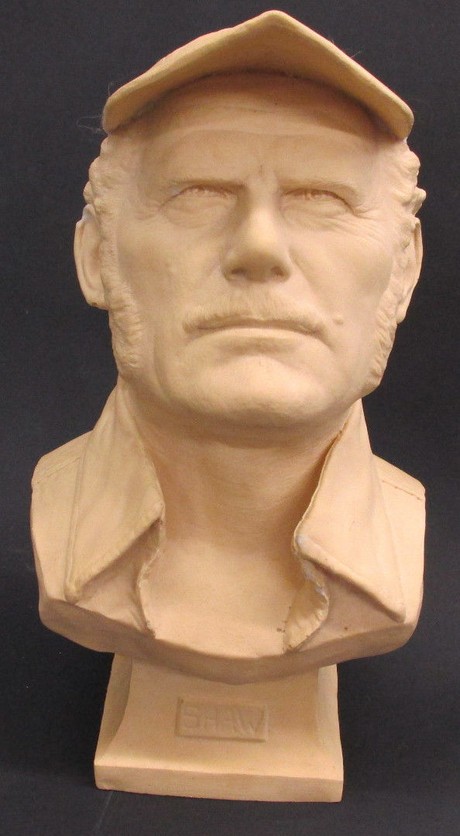 Quint: First of all, it's mind boggling for someone with zero artistic ability, such as myself, to see your work. When did you figure out your super power to realistically recreate iconic faces?

Nick Marra: I did a small scale Quint bust about 20 years ago that was displayed at the Mad Monster Model Party in Long Beach. Even though it was a monster show, it was one of the “hits” of the convention. I showed it to Stan Winston, and within days I was sculpting at his studio.

Quint: Describe the process a little. Is there something you see in a face that makes you want to sculpt it? How do you go from photo to 1:1 replication?

Nick Marra: I look at a face like a puzzle. I look for certain characteristics, that stand out. In terms of features, but also the personality of the character. For instance, Roy Scheider, his nose is so distinctive, it makes it easier to approach. There are certain keys to everyones face, and you have to get the pieces right.

Quint: I noticed most of your sculpts are men with a lot of character in their faces. Deep wrinkles, lines, angular cheeks, etc. Walter White, Eastwood, Quint and now Brynner. Does that help nail the likeness more than a younger, smoother face or is it just coincidence? 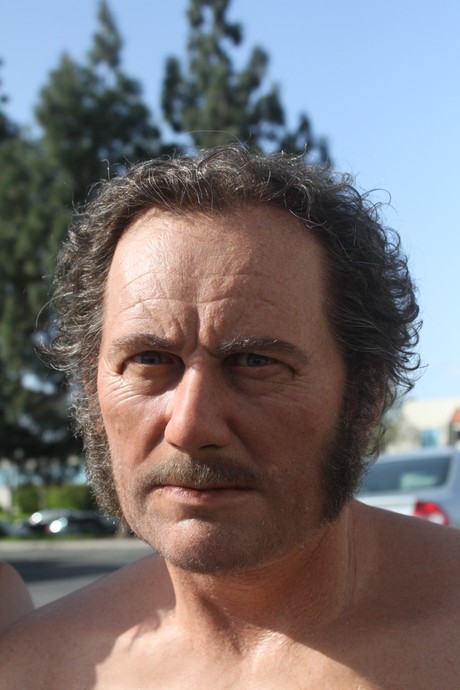 Nick Marra: Definitely. Younger, smoother faces have less landmarks to go by. The smaller pieces, the softer features having to be exact, bring a face with less character to life.

Quint: Has there been any face you've attempted that you couldn't get just right? Is there a step in the process that is always particularly challenging or does it differ with each project?

Nick Marra: No, not in my personal work. Although, there has been some work that I have not had good reference, which makes it much harder on my end to get the detail. Lighting is very important in the photos. If it’s a bad photo, then it becomes a guessing game for me, which is not good.

Quint: You're premiering your next one at Monsterpalooza. What made you choose Yul Brynner's Gunslinger from Westworld?

Nick Marra: I was 10 years old when I saw WestWorld. It had a profound effect on me. The concept by Michael Crichton I thought was brilliant. Over the years it was always something in the back of my head that I thought of doing, and the timing seemed right with JJ Abrams’ interest in renewing it and opening my studio. 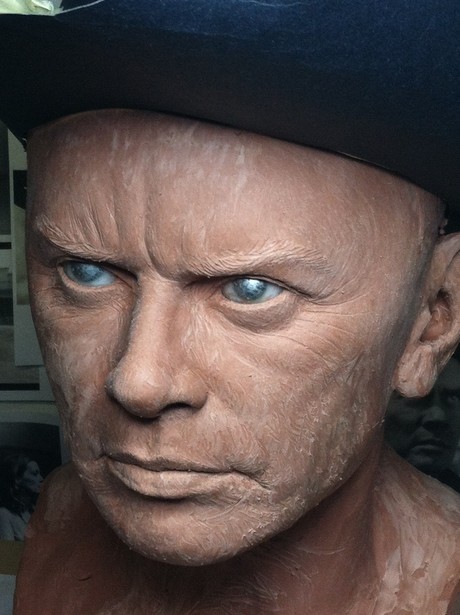 Quint: Unlike your other sculpts, this one is mechanized. Did you bring someone in to help make it work or are you as good at engineering as you are sculpting?

Nick Marra: Yes, I called my friend for 25 years, the brilliant Tim Ralston. At first, I wanted to do a removable face mechanism, LED eyes, smoke from the inside, audio and music tracks myself- but after talking to Tim, also a huge fan of the original film, he leaped at the opportunity to bring this character to life. His work is nothing short of amazing. Realizing the work load, it really made more sense to get Tim involved, and I’m glad I did, I couldn’t have done what he did.

Quint: Describe the process, start to finish... from sculpting to dressing. Do you start with clay and then make a cast?

Nick Marra: The Yul Brynner sculpt was not started with a big block of clay, because it becomes really heavy and the mold makers don’t like that so I used the head of a female mannequin as my sculpting base. Most of the time I start with an aluminum tube and a crumpled up piece of paper, then put clay on top of that. But I never work from clay presses from life casts. To me that’s cheating.

The sculpting process was not inhibited by the mechanization of the face. It was in the coring stage that we had to pinpoint where the face was going to separate. Tim and I decided the forward movement and 3 inch slide to the right, once we were set on the movement, Tim mounted his mechanics in the understructure. LEDs were added in the eyes, and one of my favorite tweeks-the sound files of dialogue and music tracks from the movie controlled by a remote control key fob. And to top it off, smoke will come out of the face cavity when opened. There will also be a battery light in the butt of the gun. We really went all out. Even the base, Tim made this incredible wooden floor base that looks like it was taken out of an old saloon from the movie. This was a real labor of love. For Tim and I both, Westworld is one of our favorite movies. 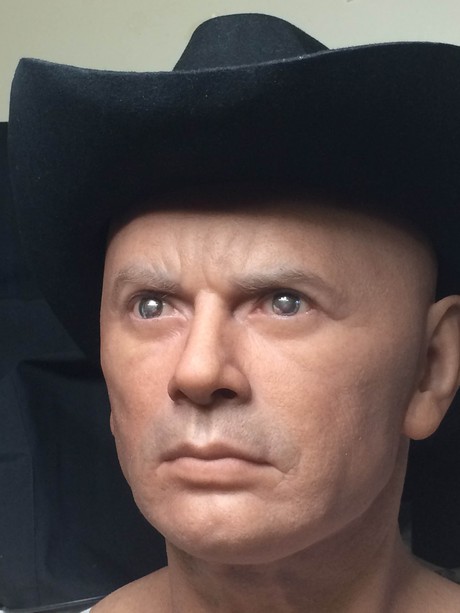 For the props, I got a Colt SSA .45, with a 7.5 inch barrel. I was able to find some of the clothes in second hand stores, but the shirt I had custom made. I was lucky enough to come across the exact pants and belt in a local costume rental house and sweet talked them into selling it to me. The gun belt and holster is custom made.

For his body, I modified an existing body form and concentrated on his unique profile and posture. It is very specific in the movie. I really wanted that Gunslinger pose-chest out, shoulders back, hands grasping his gun belt, sucked in gut. Looking at it now, I think I was successful in getting that pose.

Quint: Right now the Gunslinger will show up at Monsterpalooza. Will he be making any other public appearances of note in the near future?

Nick Marra: No, no other plans as of now.

Quint: Who's next? Can I nominate Gene Hackman as Harry Caul from The Conversation? How about a fully bearded MacReady from The Thing?

Nick Marra: Haha, I don’t want to divulge any future projects at the moment, but stay tuned! 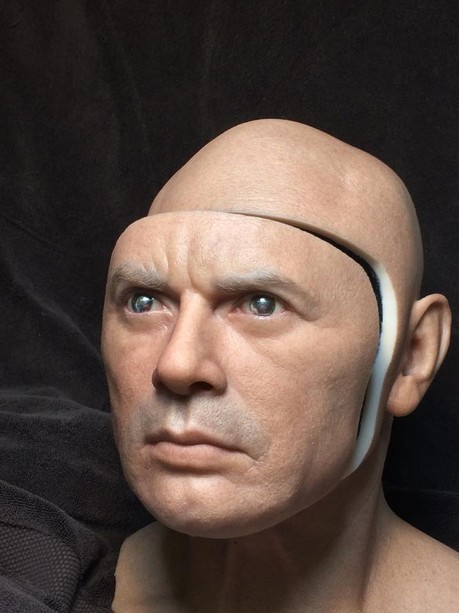 Before I close this out, I'm going to show you some of his progress work on Walter White and link you to his Facebook page once more where he has a ton more amazing pictures. Like his page and if you're lucky enough to be at Monsterpalooza this weekend see the Gunslinger in all his mechanized glory. Now, here's Walter: 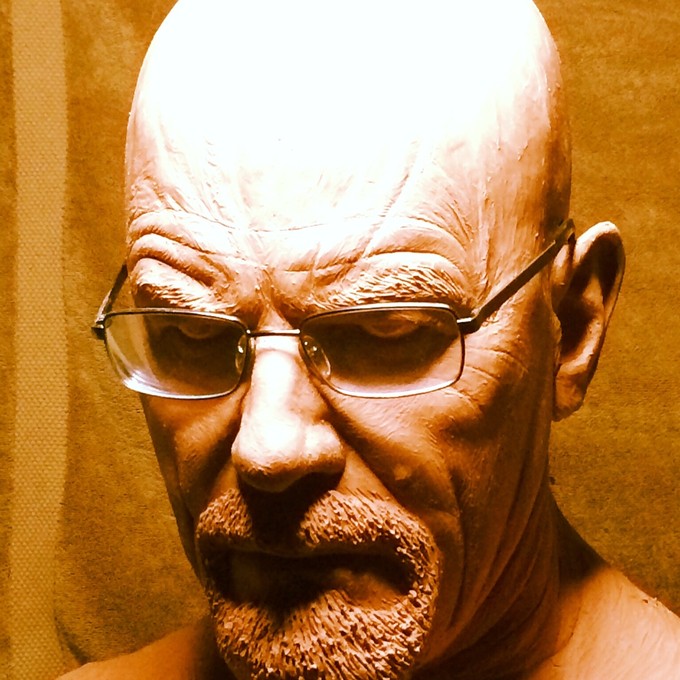 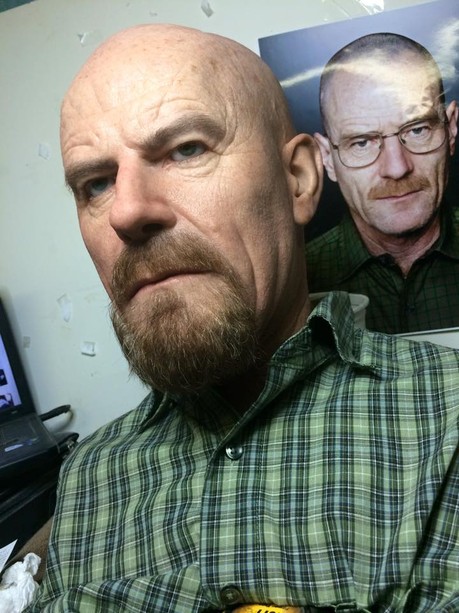 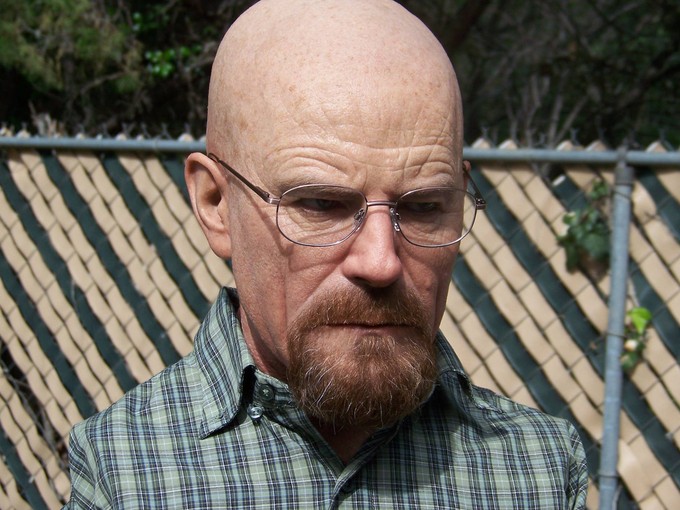