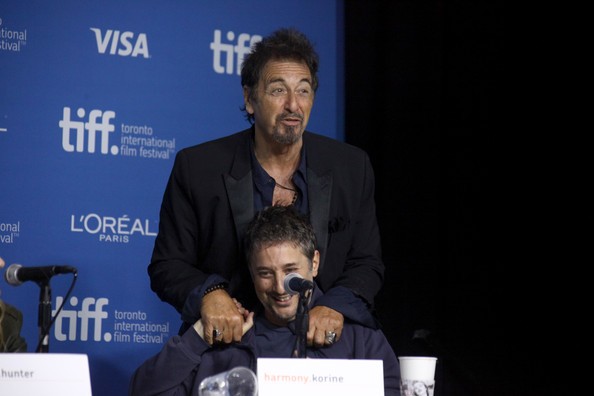 SPRING BREAKERS was a surprising success, both commercially and critically, but somehow, I still think of Harmony Korine as the indie renegade who made wildly experimental flicks like GUMMO and TRASH HUMPERS, and who'd steal shit from Meryl Streep's purse. So it was weird for me to read today that his next, THE TRAP, will boast a cast including Idris Elba, Benicio Del toro, Robert Pattinson, James Franco, and Korine’s MANGLEHORN co-star, Al Pacino.

Focus is in talks to distribute the film, which will have Elba starring as a Miami rap star whose old buddy (Del Toro) is released from prison after a long stretch, and comes at his old buddy to get him back for the time and money he thinks he’s owed (I’m sure the similarities with TV’s EMPIRE are purely coincidental). Pattinson plays the leader of “a crew of Uzi-wielding surfers", Franco is Elba’s coke-fiend manager, and Pacino is Del Toro’s parole officer.

One of the reasons SPRING BREAKERS’ success was a surprise was that, although it was maybe more mainstream than Korine’s most out-there works (including his recent Val Kilmer-starring segment in THE FOURTH DIMENSION anthology film), it still retained the director’s idiosyncratic, unconventional style. I can’t imagine it’ll be any different, here, despite the somewhat conventional premise and A-list cast.

The cool thing is that these guys have all worked in bizarre projects for atypical directors, so I don’t think any will object to melding into Korine’s ostensibly weird vision for the film. Pacino, in particular, had great interplay with Korine in MANGLEHORN, and I am looking forward to seeing how the director uses one of the most iconic actors of the last half-century. I can’t imagine he’ll be glamming him up too much.

I know some Korine fans from back in the day that may have qualms with this new direction the former KIDS screenwriter’s career has taken, but if he’s gonna go mainstream, this is the cast to do it with. We’ll just have to wait and see if this one is as meme-baiting and culturally relevant as SPRING BREAKERS was.