Hello ladies and gentlemen, Muldoon here from the heart of SXSW with my thoughts on a new documentary film: BARGE. If you've read anything I've written during any film festival, you know I enjoy wandering into random movies or hopping in the back of a random line without any real plan. I do that for two reasons, 1) I'll never be dissapointed about not getting into "that" movie and 2) I get to check out films I might not have thought I would like. BARGE is more of the latter in that respect - I hadn't had it on my radar at all and found myself at the South Lamar Drafthouse Saturday afternoon just open minded and ready to check out a new film. 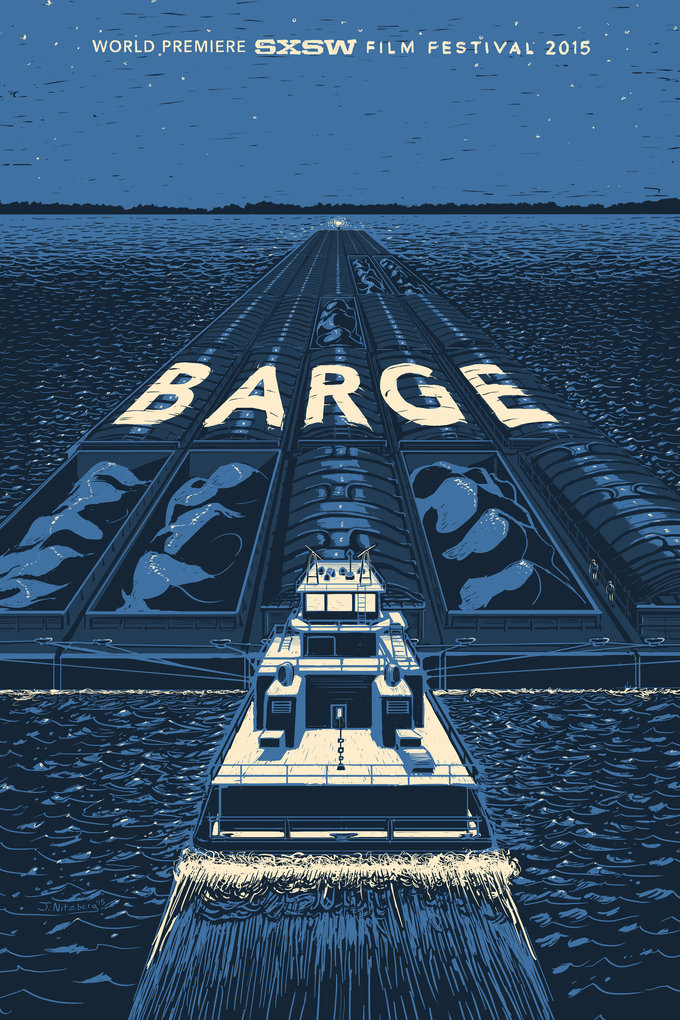 A towboat drifts down the Mississippi River, due for the port of New Orleans. The water, the banks, the bright lights of a port ahead; the lure of a coming paycheck and a home-cooked meal. This is the world of BARGE. A green deckhand following his father into the family business. A former convict working his way upward job by job, in the hopes of being First Mate. A thirty-eight year veteran engineer in no hurry to retire. An ancient waterway pulling a double shift as the backbone of a national economy; a tangle of thick steel cables, tied together just right. As long as the boat’s moving, they’re making money. An intimate portrait of the machinery of American ambitions.

I'll be frank, the idea of watching a film about a towboat isn't something I'd typically go out of my way to seek out. That said, I'm absolutely glad I stumbled upon this film on Saturday. What could have been an incredibly boring film turned out to be a beautiful slice of life that's embellished with numerous gorgeous shots. The film introduces you to a handful of men, proud "rednecks," who on the surface might not necessarily seem like the poster boys for the American Dream, but over the course of the film - they each win you over - with their unique perspectives and stories. They pull you in and almost force you to care about them. We've all seen reality TV, with talking heads and created "reality," - shows like SHIPPING WARS, WHALE WARS, or some other kind of "wars" and you might be thinking "Muldoon, what new stuff can this film bring that I can't just catch on TV?" Answer: a relaxed pace that beautifully encapsulates the views those men experience on a daily basis. It's not all hustle and bustle, and so director Ben Powell reminds us of that with his calm pacing, his willingness to linger just that extra moment... that deliberate decision to not cut-cut-cut, but to let the film breath - almost like wine (to sound a tad cliche).

What this film brings to the table aside from pretty images and a calm serenity with pacing is a reminder that the American dream is alive and well. This slice of life covers roughly five or six individuals, each with their own pasts and stories that led them to where they are, working a towboat for weeks at a time. For some it's a family tradition, others it's a last resort, but each one of their stories is relatable to you and me. I have to give Ben credit for that. The obvious key to any great doc is following good subjects and Ben did just that. He's navigated tricky waters by not exploiting his subjects, but by leveling them with each person in the audience. I can't imagine spending weeks at a time on a boat, but thanks to BARGE - I have a tiny hint of a clue.

Regardless of what you may or may not be into, BARGE is a great film that's deserving of your time. It's a lovely window into a world that might not be what you're used to. It highlights the struggle of "keeping it together," whatever "together" might be. It's not a hokey feel good movie, yet you won't be walking out of the theater feeling blue. It's a breath of fresh air - a true American film. I hope to see more from Ben, and I'm glad I was able to catch it on Saturday. If you're interested in more info, then float on over to the film's website or Facebook page!

If you're at SXSW, try to check out a screening: