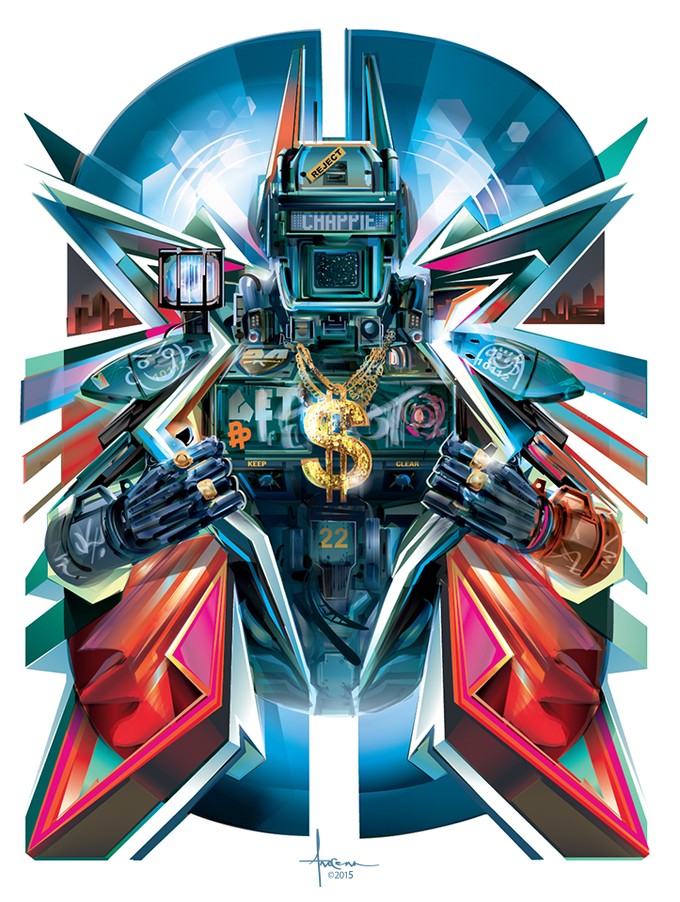 How do you go about seeing the films in your life?

Me?  I believe I see films rooting for the filmmakers and  the subject matter to kick my ass, to win my heart and mind and to be something that I could love without hesitation.

That said, it’s difficult, when you’re a film lover and yet almost everyone in your social network is gangbanging the film black and blue before I even have a chance to see it.   A creative partner of mine has been talking smack about CHAPPIE, sight unseen due to early word of mouth and reviews.   I reminded him that once upon a time films like THE BIG LEBOWSKI and FEAR & LOATHING IN LAS VEGAS were sub-20% favorable ratings…  but then he’d say, “Or the movie could just suck.”

But – if you honestly believe a movie is going to suck, why pay to see it at all?   If that’s your mentality.   Nobody that pays to see a movie, at least folks I know, pay to witness lameness…  they’re there because they hope to come away with something worthwhile.

My interest in CHAPPIE came, the second that Neil Blomkamp announced the attachment of Ninja & Yo-Landi from DIE ANTWOORD.  That very day, I sought out all of Die Antwoord’s music videos and experimental shorts – and I realized instantly.   This wouldn’t be like other sci-fi flicks.   The basic story sounded a bit like SHORT CIRCUIT, but casting Yo-Landi Visser as the Ally Sheedy character and Ninja as the Steve Guttenberg character, then setting it in South Africa in the criminal gangster world – with Dev Patel in the Fisher Stevens role…  well…   At a conceptual level, it didn’t sound like it’d resemble SHORT CIRCUIT at all…

Also, as we near the age of artificial intelligence – more and more we’re going to be bombarded with fear…  Let’s face it, Kubrick nailed this with 2001: A SPACE ODYSSEY…  Cameron played with it in his two Terminators.   Last year’s AUTOMATA was quite captivating on the subject, and this year…  we still have EX MACHINA, AGE OF ULTRON and TERMINATOR GENSYS or whatever it is being called to come…  and I’m sure we’ve got more coming that’s slipping my mind at this juncture, but…  We’re on the cusp.  I’ve read work from some scientist that thinks it is foolhardy to think an advance intelligent would feel threatened at all by a lesser intelligence, but that doesn’t keep us monkeys from telling boogie man stories of AI gone nuts.

Still, it is an issue that culturally we’re continuing to work through.   To me, I still trust Gort.   Always have.   But then I think violence is a sucker’s game.

My dad, Father Geek, he’s been obsessed with Robots my entire life.  It’s a passion of his.  There was no advance screening in Austin for this superb movie, quite frankly a terrible mistake.   Had I held a screening for this, introduced it as I wish I could have for something like FANTASTIC FEST or SXSW…   There would be a room of folks that would’ve loved this film I feel.

You see…  In a way, CHAPPIE is a perfect FANTASTIC FEST film.   Wildly violent.  International in tone.  DIE ANTWOORD is the exact cultural what the fuck, that makes FANTASTIC FEST awesome!  But Fantastic Fest can’t be going on 365 days a year…  or can’t it?

As one of the founders & owners of FANTASTIC FEST, I keep the spirit of that festival very close to my heart at all times.   To find films that make me think the word, “FANTASTIC!”  CHAPPIE is definitely one of those.

Yes, the accents are heavy and there’s a good amount of South Africa’s Gangster Speak….  But you see…  I love that.

I don’t go to the movies to see my friends or neighborhood reflected.   I don’t go to see me in movies, honestly – everytime I cameo in something, it actually takes me every so slightly out of the movie when I see me, not further into it.   No…  I go to movies to discover cultures I can’t imagine.  Once I discovered DIE ANTWOORD online, I felt about them, the same way that I feel about Bjork and Marilyn Manson and Gwar.   They’re a pair of Beautiful Weirdos in the world.

I’ve heard the movie doesn’t work because of these two…  but I find the film to work first and foremost because of them.   Because… they’re not at all the people you would ever hand the first full A.I. in the world over to.   They’re at first, the worst possible kind of parents.   They’re criminals with drugs and guns and take no shit from anyone attitudes…  but there’s a sweetness too.  Even in Ninja…  who really does come across as a frightening persona… until you see the otherside… if you allow yourself to see that otherside.

People seem to universally be praising Sharlto Copley’s CHAPPIE performance, but how they can do this while talking shit about Ninja and Yo-Landi is beyond me.   They’re CHAPPIE’s Mommy & Daddy – and much of the behavior, movement and emotional reality that we see in CHAPPIE is a reflection of these two lost souls.

But the key is finding the beauty embedded in the glorious freakshow of humanity and all we spawn.   Dev Patel is CHAPPIE’s creator, he’s a AI addict & developer.   He desperately wants to bring a fully realized AI into existence and after a breakthrough and the knowledge that there’s a perfect Robot that can only live 5 days set for destruction… he decides to… why the hell not, he’s gonna try it.

I’ll never claim this movie as being for everyone, it isn’t.   I’m sure there’s a significant portion of the audience that will barely understand anything coming out of the mouths of anyone…  these people also have to watch TRAINSPOTTING with the subtitles on…  different strokes for different folks.   SO – if you have trouble with accents, maybe waiting for home video with the subs…  that might help you.

Or maybe the tone of CHAPPIE being a childlike creation put into questionable parentage… maybe that would drive some folks uneasy…  well, certainly that’s gonna happen in AGE OF ULTRON, Tony Stark should probably be monitored for his A.I. creation… heh.   But CHAPPIE doesn’t want to be a bad robot, he just wants to live.  Like we do.  This goes back to Roy Batty declaring, “I want more life, fucker!”  And is a theme in the film.

Also in this film are Sigourney Weaver as the boss at the Robotics Manufacturing company – and Hugh Jackman as an ex-military man responsible for a flying ED-209 type of thing called THE MOOSE.   It’s a robotic drone controlled by Hugh himself.   It’s good stuff.

The action and effects work in CHAPPIE is outstanding.   Really top shelf work here.   And Hans Zimmer has a wonderful score that propels the film forward.

Ultimately, this isn’t an evil AI story, like pretty much everything else.   This is about how an AI could be born innocent, be raised by the brutality of the world and still come out a hero, still be something that we could actually need in our world.   Something that teaches us how to keep living, keep striving and how to not just go on to that other uncertain place.

DISTRICT 9 is Neill Blomkamp’s best movie, CHAPPIE is next, then ELYSIUM.  That doesn’t mean I hate ELYSIUM, I don’t.   I just wish the idea had been better developed.  It still felt loose.   With CHAPPIE, it’s a film – more than DISTRICT 9 – that I would love to see more from.   At the end of the film, we’re essentially just past the first stage of development.

I feel we’re close to getting into like Adam Link style storytelling – were the robot would have to begin advocating for the selfworth of awareness, to have certain inalienable rights.   More so, the act that CHAPPIE provides for his Creator & Mommy raises even larger science fiction questions… things that Ray Kurzweil would perk up about.

If you respect and are fascinated by the weird of society, if you love AI tales and have a healthy robotic fetish…  you’ll probably get a whole helluvalot out of CHAPPIE.   Go for Weta and Sharlto, but allow yourself to enjoy the crazy South African carnival that Blomkamp unleashes with this thing.   CHAPPIE is definitely its own film!