Quint reviews Chappie and talks through the critical maelstrom surrounding its release. 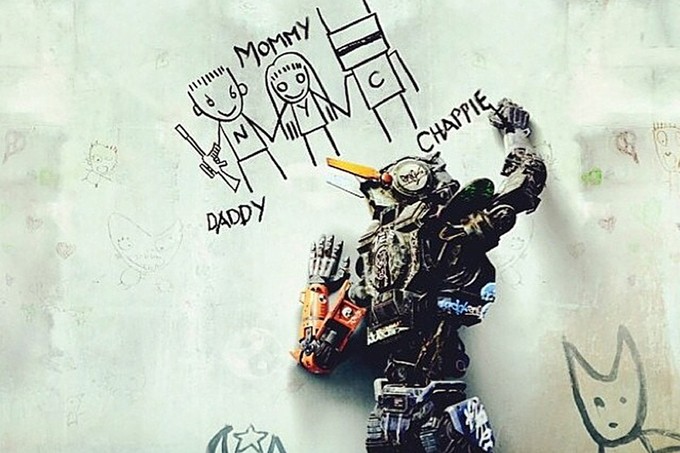 Ahoy, squirts! Quint here. There's an interesting behind the scenes dynamic when you review movies, even if it's someone like me who doesn't review nearly as often as I should. Being in Austin has it's great advantages in that it's an awesome city with awesome food and awesome film festivals, so filmmakers tend to like to come here. The Alamo Drafthouse being centered here helps, too. So, we're often on the front line when it comes to seeing movies early.

But even though Austin is a much bigger movie town than Houston or San Antonio, we don't have the population to be in the “Top 30 markets,” which someone somewhere put on a list. That means for some marketing strategies we won't get press screenings.

That's what happened with Chappie. I'm actually not all that peeved about it, to be honest, because I'm of the fairly unpopular opinion (at least with my critic friends) that the studios don't owe us free, early screenings. It's a great system that works wonders for my wallet in this line of work, but at the end of the day I feel weird when critics demand free, early access to things.

I'm sure you follow a few reviewers on your social medias of choice and you'll always see them use press screening strategy as a weathervane for the film's quality. “The studio knows they have a stinker. They're hiding the film from us.” Often times that's accurate, but what critics don't usually take into account is sometimes the studio isn't scared of showing a movie, they're scared of showing a movie that the critics have already been sharpening their knives for.

Sony press screened Chappie for their junket press and then in the top 30 markets the week of release. We'll see how that plays out with the box office, but whether it moves the marker one way or the other isn't really of much concern to me, personally. I have hope for every movie I see, no matter my own personal biases (like if I go into a Paul WS Anderson movie my expectations are lower than, say, going into a Tarantino movie). I still want to be surprised by a supposedly crap film or not let down by a highly anticipated movie.

I know, some day I'll get to the actual review. I've been thinking about this a lot after paying for the 7:25pm Thursday show of Chappie at the Alamo S. Lamar. I didn't hate the movie like so many of my colleagues did. Am I an easier target? Did I make up my mind to like it because of my deep love for District 9 just like others had made up their minds to hate it because of their deep hatred of Elysium?

Like most things the truth is probably a murky mix of multiple things, not the least of which being that Chappie has some real, undeniable problems. It was the pure vitriol that had me questioning my read on the film more than anything. I know we're not supposed to let other people's opinions influence our own, but let's get real for a second.

Any critic who says they're their own walking science experiment and are a complete 100% blank page when they sit down for every movie is bullshitting you. Or themselves. Or both. Unless they've never seen any of these actors in anything before, never heard this composer's music or seen a film by the director. Oh, and they also had to have been locked in a room and not seen one poster, still, trailer or TV spot that could give an indication of the movie's quality. Or spoken or read one other tweet, comment or status update where someone talks about the movie in question.

All that plays into expectation and whether they admit it or not, critics are still human beings who can be and are influenced by their environment.

It's no secret people as a whole love to build someone up and tear them right back down again. Elysium is a big, sloppy mess filled with great imagery and fantastic sci-fi ideas, but to listen to most critics, many who fawned over District 9, it was the worst movie that was ever released.

I believe that response isn't so much critics pre-judging the movie negatively, but rather getting excited for it based on the strengths of District 9 and when it wasn't an A+ the disappointment was blown way out of proportion.

Chappie is different. It wasn't until the news that Neill Blomkamp was flirting with an Alien sequel hit that I saw the discussion about the movie within critic circles sour.

When I didn't hate the movie like everybody else, I started asking myself why. The conclusion I've come to is that a great deal of those most vocally against the movie went in with a “prove it” attitude. I doubt I'll ever know if I'm right in that assumption. Nothing's more insulting to a critic than telling them they had it out for a movie when they didn't like it, so I'm sure I'll get much response from this piece, but I really think Blomkamp using Chappie's release as a launch for his involvement in an Alien sequel turned this particular movie into an audition instead of just another pre-summer season film.

From the first frame of Chappie you know that Blomkamp is settling comfortably into his style. News reports of a Johannesburg being torn apart by gang crime set the stage and introduce all our characters in the faux-documentary style Blomkamp used so well in District 9.

The basic set up is RoboCop meets Short Circuit. Police robots have replaced police humans and are doing a bang up job curbing crime and returning sanity to the streets of Johannesburg. The mega company behind these robots celebrates their huge victory, rolls around in their government contract cash and yet there are two key employees not fully satisfied.

One of them is Dev Patel's Deon Wilson, the creator of this line of compliant robots and the other is Hugh Jackman's Vincent Moore, an ex-soldier alpha male type whose own project has become sidelined thanks to the success of the young super star. Deon is close to a breakthrough on a real AI that is sentient. That's where his passion is. Vincent, on the other hand, is just stewing about his red-headed stepchild project, a huge tank-like robot that is remotely piloted by a human being. He doesn't trust robots to think for themselves, you see.

If the movie had been focused on the conflict between these two men with Sigourney Weaver's CEO Michelle Bradley in the middle I think much of the ire thrown at the movie would have been negated, but instead all this is pretty much background information for the central story of three dickhead thugs who owe the biggest, baddest drug lord in the region many millions of dollars. Their bright idea is to kidnap Deon because he must have some remote control that can shut down the police robots and then all they'd need to do is pull off a heist and they're square with the evil kingpin.

Through an unfortunate series of events, Deon's sentient AI program is used at gunpoint on a damaged Police Robot and Chappie is born into one messed up family comprised of his these gangsters and his stunned creator.

Almost all of my misgivings about this film center on the casting of Die Antwoord's Yo-Landi and Ninja as these gangsters... yet still playing themselves, somehow. I don't get it, but while their look works for this universe I didn't quite buy them as the central characters. If they weren't the leads I don't think I'd be as distracted, but they are essentially Chappie's mommy and daddy with his creator checking in on him every once in a while.

However, Sharlto Copley's performance as Chappie is so good, so realized and so emotionally exposed that I couldn't let my dislike of Die Antwoord derail the movie. Copley goes Andy Serkis level fantastic with his performance capture work in this film. The voice is perfectly childlike and his body language sells every emotion the robot is feeling and thinking. Chappie has a metal face, so unlike an ape or Gollum, it's crucial for the body language to work. You can't read Chappie's eyes like a flesh and blood creature. 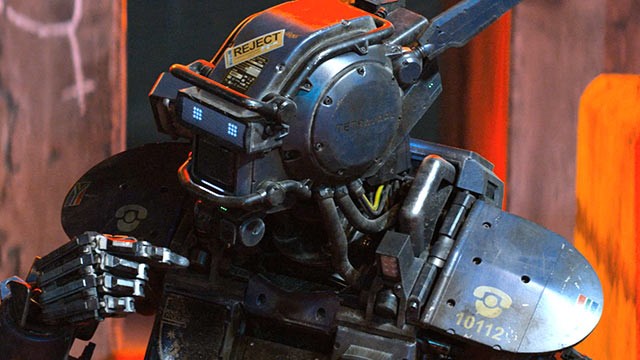 I loved the character of Chappie, so I can't just throw away the movie as a whole. Yeah, the plot is strangely reminiscent of Short Circuit 2. Yes, Hugh Jackman's bad war machine robot is pretty much ED-209. Yes, Sigourney Weaver is kind of wasted in what amounts to a bit part. Yes, Die Antwoord (Ninja in particular) makes me feel a little scummy. All that is true, but what's also true is at the center of this big, complicated messy world is a wonderful creation. That's kind of the point of the movie, too. You'd almost think Blomkamp intentionally made some of these radical, over-the-top choices to underline that, but even I, a Blomkamp apologist, wouldn't go that far.

Blomkamp works best when he's painting in broad strokes. Chappie is performed big. The gore and violence is shown big. When it gets to nuance that's when things get sloppy, but still the heart is there. The intent is clear. While the movie might not be revolutionary or life-changing it's still an entertaining film with a true emotional core that worked for me.

I think if you're approaching this film cynically you'll find enough that doesn't work to write it off completely. If you eye-roll your way through Chappie's emotional development then nothing else in this movie is gonna hit home for you. But if you find yourself engaged in those moments then I think you may end up in the mixed-positive spectrum like I am.

Visually the movie's on point, the Hans Zimmer score is actually pretty damn good (and this is coming from someone who is hit or miss when it comes to Zimmer's work), the effects work is impeccable and the world is pretty trademark Blomkampy. Same with the tone, actually, which jumps from cute to ultra bloody at the drop of a hat. I like it when tones blend in movies, but some don't. I get it. I personally don't view it as schizophrenic, but a way to create a hybrid that might be a little different from what you're used to.

Basically, I left the movie feeling like the negative reactions were more extreme than the film deserved and that's what had me questioning the hype surrounding the movie for so much of this review, which I'm sure comes off as defensive and maybe more an answer to others' opinions than a deconstruction of the movie itself.

Maybe that's what this rambling review is, but it's the only way I could sit down and honestly write down my thoughts on this movie. Perhaps my expectations were lowered by the negative press. Perhaps many of my colleagues got caught up in the negative buzz. Or perhaps this is just another example of what I love so much about the cinema artform. Everybody watches a film with their own baggage, their own likes and dislikes and their own life experience. Everybody interprets movies a little differently than the rest of the audience, relate to a story a little differently.

End of story, I paid $10.25 to see Chappie and am happy with my purchase. Make of that what you will.