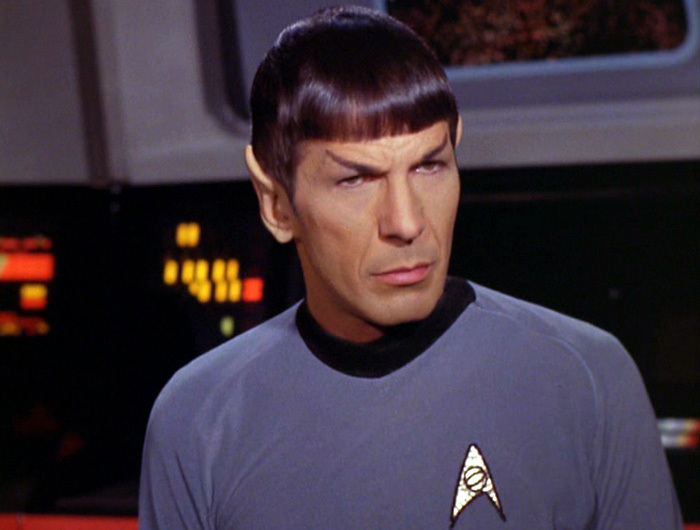 I have two initial responses to his passing.

One: There was scuttlebutt that Nimoy might assume a more prominent role in Bad Robot’s next Star Trek movie, and that Old Spock might even re-encounter William Shatner’s Old Kirk.  So another dream dashed.

Two: Not enough was ever said about this guy as a filmmaker.  Nimoy was a huge motion picture director until he wasn’t. He helmed nothing but acclaimed blockbusters until he made a naked Liam Neeson movie, and then he wasn’t doing that anymore.

I love Martin Landau; he’s a wildly underrated actor who never got enough screen work for my taste. He was also Gene Roddenberry’s first choice to play the Enterprise’s green-blooded extraterrestrial science officer Spock. Landau turning down the role was our great fortune. Captain Kirk was the coolest, yet Nimoy paradoxically created something even cooler with Spock.

Like most right-thinking nerds, I love Star Trek more than just about anything. I host a Saturday radio show that focuses on pop culture, and every weekend I prepare by searching for some new excuse to talk about Star Trek.

Marvel, DC, Star Wars and Star Trek. These to me are the four corners of the nerd universe. Sadly, of those four, news about Trek is the hardest to come by most weeks.

Tyrion and the Khaleesi and Columbo and Rockford and Buffy and Number Six and Agent Cooper are all wondrous creations, but Nimoy’s Spock is the man, or at least the half-man. Always the smartest guy in the room (we learned in “The Undiscovered Country” his mother is a descendant of Sherlock Holmes), capable of disabling any opponent with a casual squeeze to the shoulder, and uniquely unflappable. Even when one compares him to the many other Vulcans who have traipsed in and out of the franchise over the decades, it’s clear that Nimoy’s half-alien was the fellow who took Surak’s Emotionless Vulcan ideal most seriously. Even more seriously than Surak, perhaps, if one notes here the unVulcanly peevishness in Surak’s voice:

“Tom, this is business and this man is taking it very, very personal” is something Sonny Corleone said, but Nimoy’s Spock walked that walk. Leaving aside the whole “sex every seven years” business, I still want very much to be Nimoy’s Spock; I’ve wanted to be Nimoy’s Spock since the “Star Trek” repeats started coming on before my bedtime. Zachary Quinto’s Spock? Not so much!

Quinto is a terrific actor. I love him in NBC’s “The Slap.” I thought he might have been the best actor on “Heroes.” But Quinto’s squeaky-voiced Vulcan can never really be Spock to me. He’ll always be an imperfect facsimile, the Lazenby or Moore of the franchise.

Just the same, I’m obliged to point out how much I enjoyed him as “the new guy” on “Mission: Impossible” (again replacing Landau). And I always looked forward to his appearances as Walter Bishop’s nemesis on “Fringe.”

(Tragically, J.J. Abrams – who worked with Nimoy on “Fringe” and the two most recent “Star Trek” movies – apparently never found a good-enough excuse to have Nimoy reprise the character of Paris in any of Bad Robot’s “Mission: Impossible” movies.)

And then there’s Nimoy the filmmaker. Trek fans (myself included) love to dote on “The Wrath of Khan.”  Nicholas Meyer’s first Trek adventure is a magnificent picture, and one that benefits mightily from what Nimoy does with Spock’s heartbreaking death scene:

But 1986’s “The Voyage Home” is my favorite “Trek” film. Nimoy directed it, and shared a “story” credit for his work on its script. It moves like crazy, has the biggest laughs, houses a superior romantic comedy at its center and boasts the happiest ending of the any of the Trek movies.

And as I say, Nimoy’s movie-directing career was a monster, until it suddenly wasn’t.

1984’s “The Search For Spock” marked Nimoy’s feature directorial debut. Sandwiched as it was between “Khan” (90% positive on Rotten Tomatoes) and “Voyage” (85%), it is remembered as a lesser installment, but it still earns a fresh 78% on that Tomatometer!

Nimoy’s directorial follow-up to the Trek hits was “Three Men and a Baby,” a delightful tale of bachelor fatherhood that still gets huge laughs out of me (and scores 74% positive on RT). It almost made more money than Nimoy’s two Trek movies combined!

And this is a good place to pause for a glimpse of the amazing commercial success that attended Nimoy’s big-screen directorial career. (Grosses are domestic theatrical.)

“Three Men and a Baby” was the highest-grossing film of 1987!! It did better than “Fatal Attraction,” “Beverly Hills Cop II,” “Good Morning, Vietnam,” “Moonstruck,” “The Untouchables,” “The Secret of My Success,” “Stakeout” and “Lethal Weapon.”

And then this happened:

So yes. You can direct the biggest movie of 1987 and still be done directing movies by 1994.

Let's close with some words from astronomer and longtime Ain't It Cool contributor Andy "Copernicus" Howell:

It is hard to explain the impact Leonard Nimoy had on our culture. In an era before tech start-ups and online geek communities, Spock was about the only thing out there signifying that it was ok to be smart, logical, and a little socially awkward. It wasn't just ok, he was fascinating, powerful -- the most compelling character on the show. He inspired millions of scientists and engineers, including me.

I'm sad to hear of his death. But his spirit lives on. Here he is, narrating this video about NASA's DAWN mission, which is now at Ceres. There are spaceships out there, going where no one has gone before, built by engineers inspired by him.