Maybe a ghost WILL follow you home if you ride the Haunted Mansion at Disneyland! 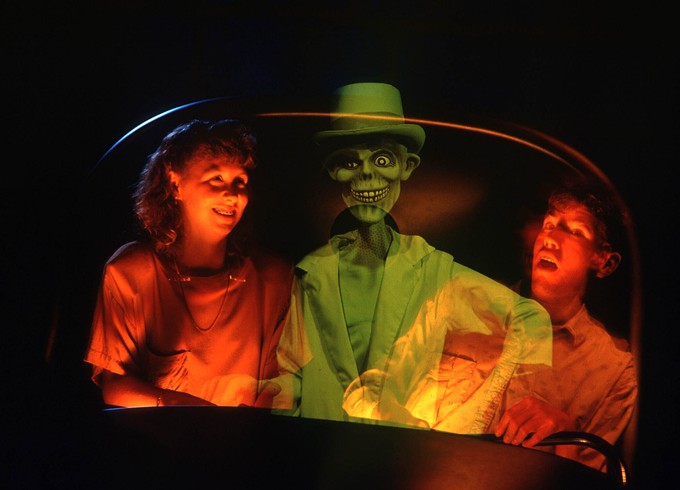 Ahoy, squirts! Quint here. This isn't exactly movie news per se, but it does relate to another one of my obsessions, so I figured I'd take a little space on the site to share it with the rest of you folks.

I am a Disney Parks nerds. Particularly Disneyland, probably because I was taken there at just the right age, so there's something about visiting that connects me directly with the happiest feelings from my childhood. I also like fun rides and the creativity the Imagineers bring to every aspect of the park. If anything I've grown to love the park even more as an adult, so it's not simply a nostalgia trip, though I'd never argue that doesn't play a significant part of my enjoyment of the park.

I remember riding the monorail, floating above the park in the now gone buckets of the Skyway. I remember Dead Men Tell No Tales, Captain Hook sneering down at me and, most of all, I remember The Haunted Mansion. I was into scary stuff even at the young age I was when I first went (maybe 6 or 8), so naturally I wanted to go on the Haunted Mansion. I vividly remember stepping into the dead center of the portrait room and just as the paintings finished stretching a guy in the group lost a contact lens. Everybody got on their hands and knees to help him search just as the skeleton appeared above us all. There I was, in a very vulnerable position, on all fours feeling around in the dark, when the remains of our ghost host's swaying form appeared.

It scared the bejeezus out of me. That was the moment my obsession with this attraction began. I didn't know how they did it. Suddenly the skeleton just seemed to materialize out of nothing. Was it really supernatural? I don't think I believed that even when I was that young, but there was an air of magic around that ride, moreso than any other in the park.

I'm a season pass holder to Disneyland now, even though I live over 2,000 miles away and every time I'm at the park I'm guaranteed to go through the Haunted Mansion at least 4 or 5 times.

It's one of my happy places and I know I'm not alone, so I'm going to share a video with you even though it's old and I'm sure it's faked, but fuck it. I like it and wanted to talk about it, so I'm gonna do just that.

My buddies at Bloody-Disgusting posted a video purporting to be security cam footage that shows a ghostly figure walking out of the Haunted Mansion and damn if it doesn't give me the heebie jeebies (yet still puts a large grin on my face).

I'm sure it's been debunked since nobody I know has mentioned this to me in the 6 years this thing has been online, but I'm gonna still pretend it's real... just like I pretend the portrait room is stretching and the infinity hallway isn't just an illusion accomplished with scrim and mirrors.

And who knows? Maybe it is true. People do attempt to dump the ashes of dead relatives and friends in the ride all the time. Hell, I'd love for someone to do the same for my remains someday. Put that in the will, Mr. Lawyer! Nobody gets any of my shit until someone successfully leaves a little sprinkling of me at the Haunted Mansion!

Anyway, I loved this and I hope someone out there enjoys it, too.