Russ Sheath here and this week Marvel bring us their first venture into the world of the Dark Lord of the Sith, DARTH VADER #1. I was lucky enough to grab some time with the writer of the second series from that Galaxy far, far away...Kieron Gillen. 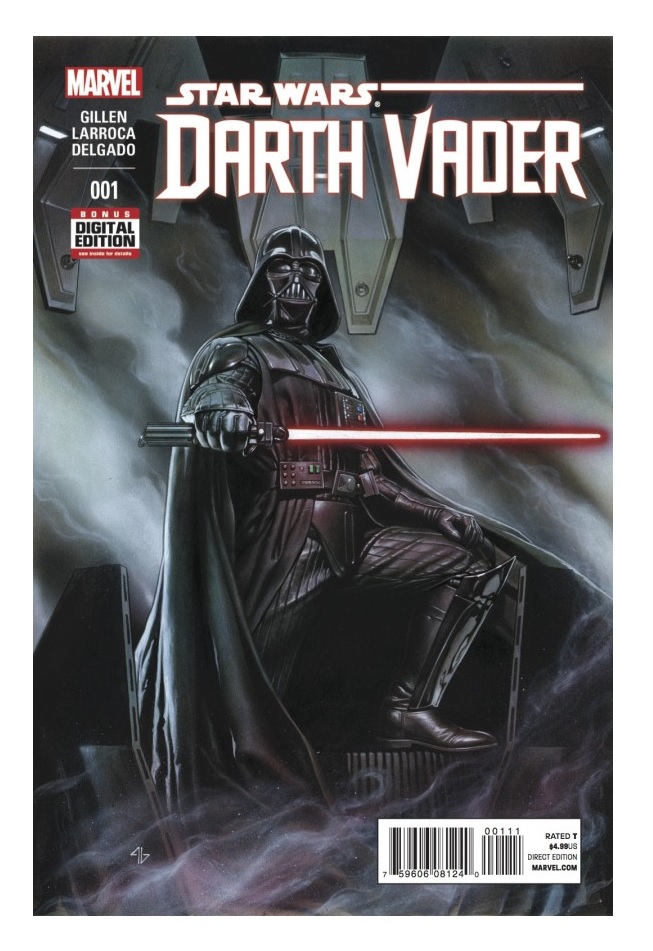 KIERON GILLEN (KG): The editor, Jordan White got in touch and said that they were planning the Star Wars books. Jason Aaron was going to be doing STAR WARS and that the second book feels like a Darth Vader book. Would I be interested in putting some ideas together?

I chewed it over, and I didn’t immediately say yes, which seems a weird thing to say! But, it's not a random sort of job, you only really get invited to tell these stories. It’s an important period in Vader’s life and deals with some very important character ‘meat.’

RS: Are you a child of the STAR WARS era?

KG:  I am. I’m 39 and the first film I saw at the cinema was EMPIRE. It’s quite a primal thing that goes right to the heard of us as pulp fiction writers. I got a weird sensation when I wrote the first Darth Vader line and I was very much aware that it had to be a good Darth Vader line, representative of his character and his voice. We want to make it feel like STAR WARS, and while STAR WARS has many characteristics, it’s got to be really good. You have to have that certain ambience.

For example, If you do a straight story about the antagonist, does it feel like STAR WARS? To me STAR WARS was about the romance, the comedy and all the other elements that come together. If you were to write about the blank faces of fascism, there’s not much room for that, but to make it about Vader and his sheer force of presence, that makes it interesting. 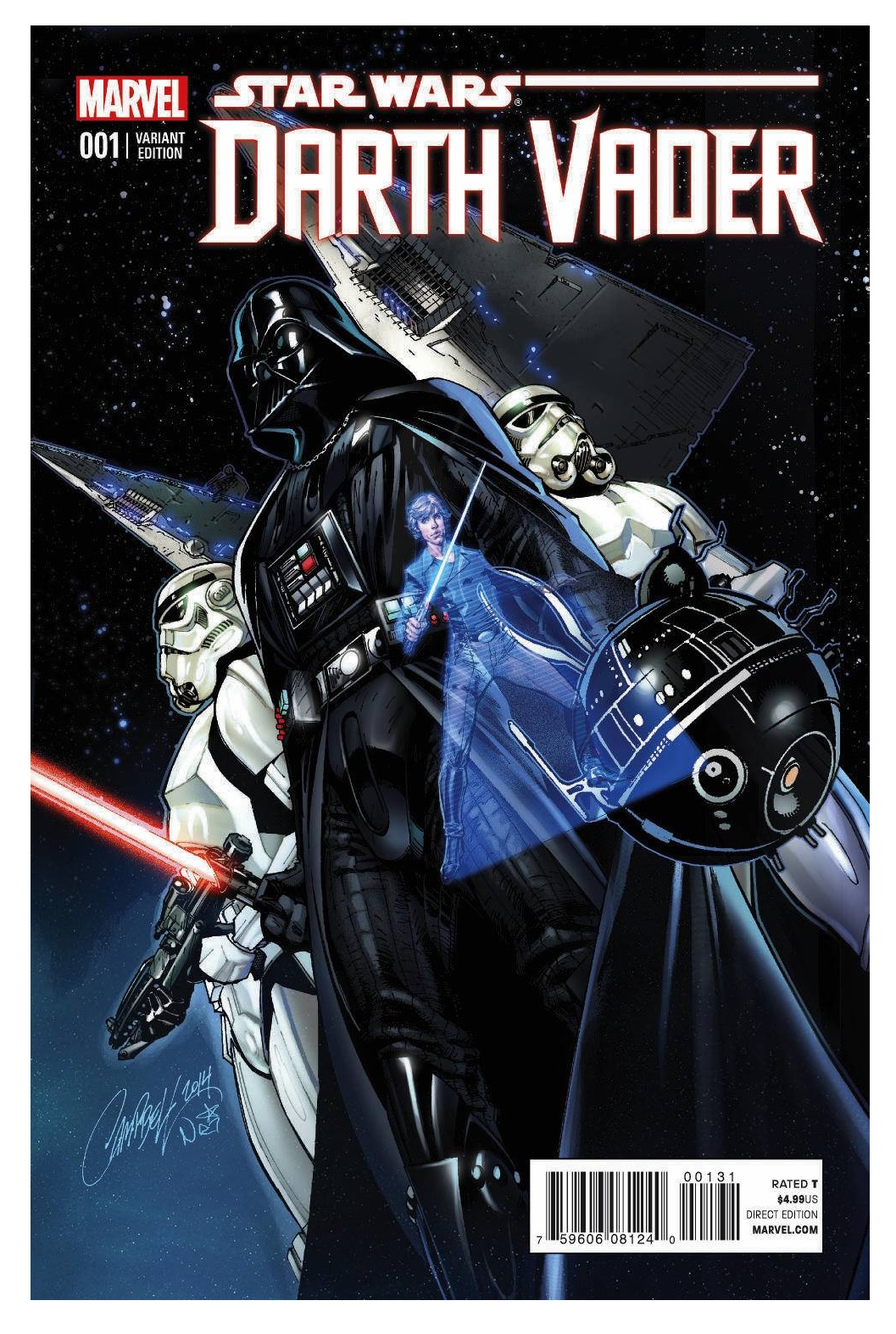 KG: Ultimately, it does seem to be a difficult job but I don’t see it as that. It’s a challenge, sure, but I’ve always wanted to do a villain led book and this is a great opportunity to put that into play and to do it with a villain with the stature of Vader. I can’t think of any character that is comparable in the cinema. If there’s a list, he’s near the top of that list.

My story is set between the end of A NEW HOPE and the beginning of EMPIRE. At the heart of the character is tragedy, its one of the reasons why he works. If you look at the films, the Emperor's plan for almost 20 years has been to build a Death Star, get rid of the senate, and rule the galaxy. Its one of the first lines in A NEW HOPE. At the end of A NEW HOPE, the Empire is in a really bad state and Vader is the one responsible. Sure, other people were also responsible, but he is the only one still alive.

At the start of EMPIRE, Vader is more powerful than he was in STAR WARS, politically, and there’s an interesting fall and rise story there. The model I used for that was HOUSE OF CARDS, where you have a man who had political power and who feels slighted but who then goes to methods he would not normally use to reclaim his power. 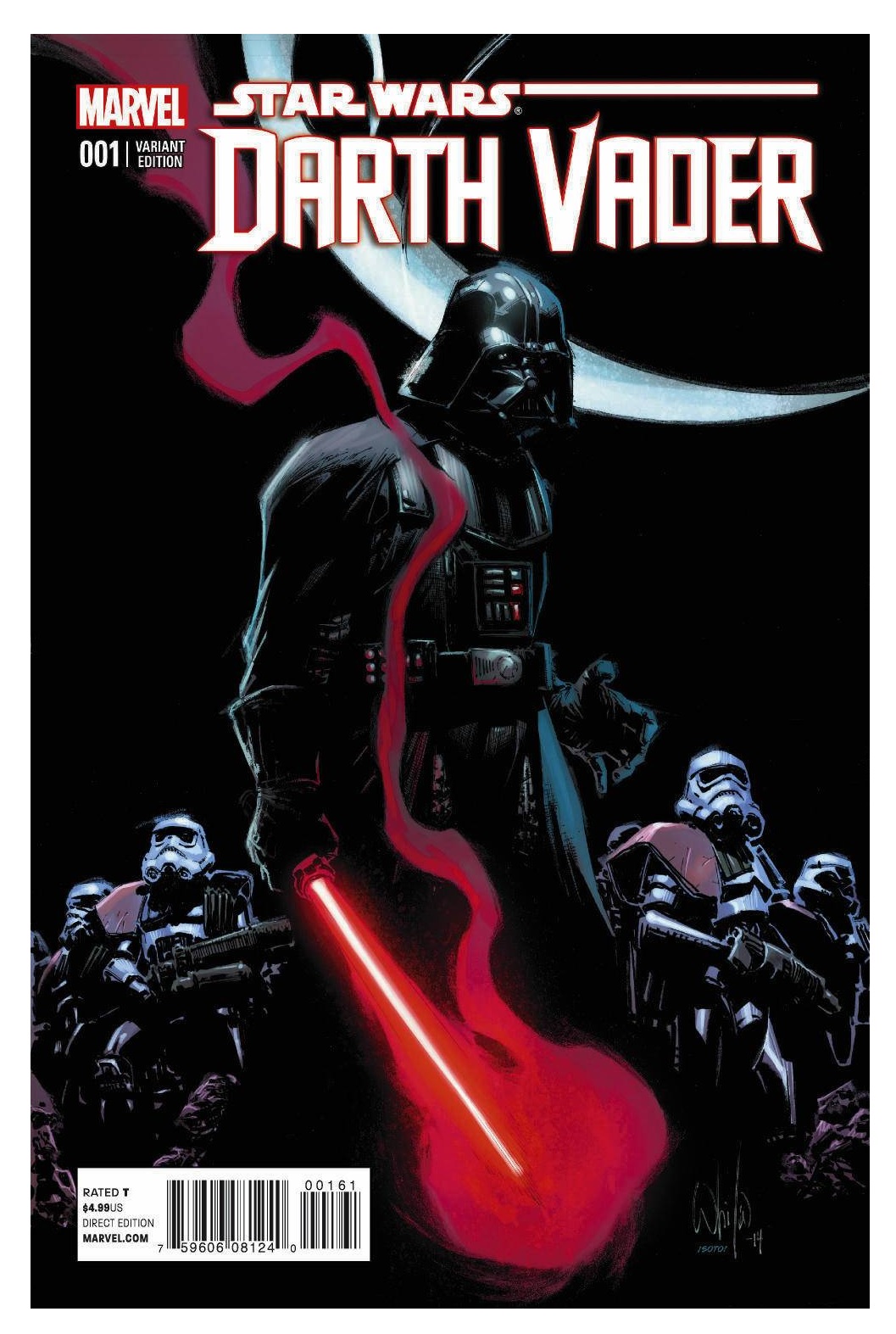 When I was watching EMPIRE, I paid attention to the scene where Vader is briefing the bounty hunters. Now, Vader is a senior manager, he really should not be briefing the hired help, (laughs), but there’s some form of relationship there. When he’s telling Boba Fett ‘no disintegrations’ its clear there’s a relationship and that Vader has some form of connection with the seedier side of the STAR WARS universe.

Then, when you surround Vader with lots of different personality types, you can allow him to be the song silent type and let others do the talking, as we build up the cast in a SEVEN SAMURAI kind of way. Its kind of the 'dark mirror' of the STAR WARS cast and my book and Jason’s book run parallel to each other, so my first issue works off the incidents in Jason’s book. You don’t have to read them both, but if you do you can see the connections. I like rewarding readers for reading more.

One of the cool things was writing the scroll text, but from the Empire's perspective. So I wrote; ‘it was a time of insurgents….’ One of the ways I’m trying to make the book work is looking at how people feel about the rebellion and the Empire. The play with perspective is quite interesting I think.

In Jason’s book, Vader is the bad guy, the villain. In my book, that’s what he does on Tuesdays. The rest of the week, he has to work and there are other things he has to do. Vader, just going around killing freedom fighters, is a book a lot of people couldn't get behind. But, looking at the internal pressures and Vader’s rivals in the Empire, that’s a good way of looking at it.

RS: When you are writing the story, are you writing it from the perspective that the reader doesn’t know what happens in THE EMPIRE STRIKES BACK? 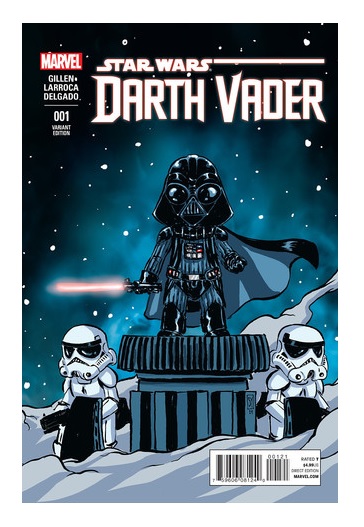 KG: I'm writing STAR WARS as cleanly as I can and while the reader can see what is being foreshadowed…..if you watched A NEW HOPE but you didn’t know how it ended, my book would not necessarily have spoiled it for you. If you do know how it ends, then you will recognize that in the story too.

RS: Have you hinted at the tragedy of Darth Vader in your book? The interesting thing about Episode 4 is that you don’t know a lot about Darth Vader, even at the end. You surmise that he’s a man because there is a relationship with Obi Wan, but I remember as a kid thinking ‘what is Darth Vader’? ‘Are Stormtroopers robots’? You really don’t know that much.

KG: The real meat of it is that we don’t see Vader realize that Luke Skywalker is his son in the movies. There's real drama is Vader learning that Luke exists and what that means. Vader isn’t going to get all emotional, he has the mask, but what I can use to convey his emotion are his actions, and occasionally I use one panel flashbacks.

RS: Can you tell us a little about the supporting cast? Darth Vader is interesting in that he is the Emperor’s henchman. He doesn’t have a rank as such, but he clearly has some standing in the Empire and very prominently so.

KG: There are certain characters…Boba Fett and other agents are in there. Issue one begins in Jabba's palace and it goes in a very different way to when Luke was there, largely because Vader treats problems in a very different way to how Luke does. I start bringing some droids in and a character called Aphra, who is a kind of Indiana Jones character, in that she travels the galaxy looking for ancient artifacts and making sure they get into the wrong hands. She’s fun, roguish and adventurous. There’s a protocol droid called Triple Zero who specializes in torture, he’s a lot of fun and there’s a kind of astro-mech droid too. 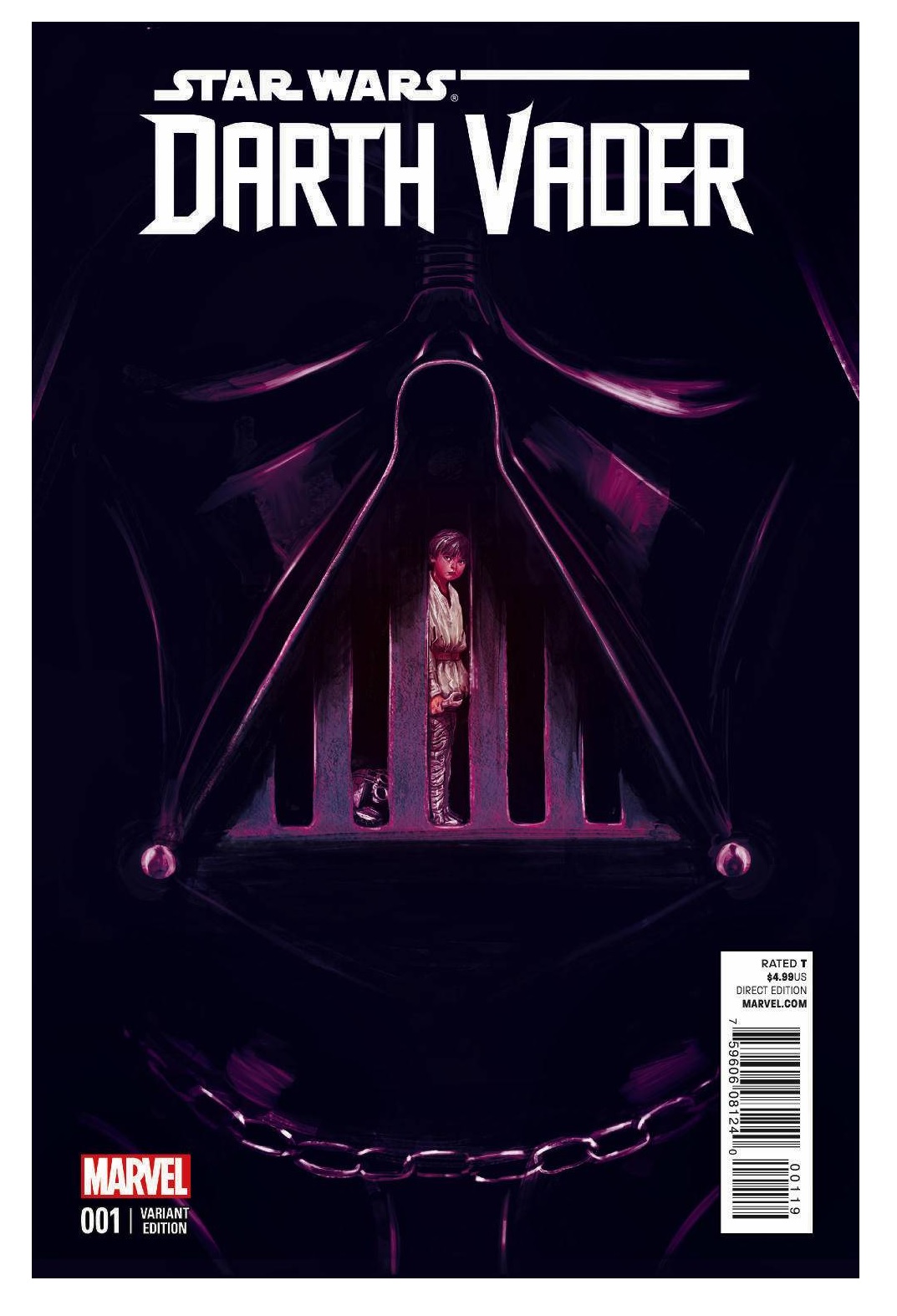 RS: When you listen to George Lucas’ commentaries on the DVDs he says that the real villain of the piece is the Emperor, and now we know Anakin’s back story, it offers a completely different perspective on the character and on the films as you watch them, episode 1-6.

KG: The Emperor is a major character in the book. Look at the scene in the Special Editions where the Emperor is talking to Vader about the son of Skywalker. Now, watch that scene assuming that Vader already knows that he has a son, and that becomes a scene of them essentially lying to each other. That's interesting to explore.

RS: In another commentary Lucas talked about Vader being something of a disappointment to the Emperor. Palatine wanted the ultimate henchman, but he ended up with this shell of a man.

KG: You’ve hit on something interesting there. Vader dealing with that, his personal insecurities and how he deals with rivalries and threats is something I'm exploring.

RS: You are working with artist Salvador Larocca - his style is very versatile, the work I’ve seen from Darth Vader is looking great.

KG: Salva' was one of the original artists we thought would be a really good match for the book. He does incredible likenesses and his tech is great - coming off that seminal run on Iron Man, he is a man who can really draw some starships. He’s also extremely fast, scarily so. Even with the increased shipping schedule, he will be able to draw all of the issues and give the book a real sense of cohesion. Edgar Delgado is doing the coloring and is equally amazing. 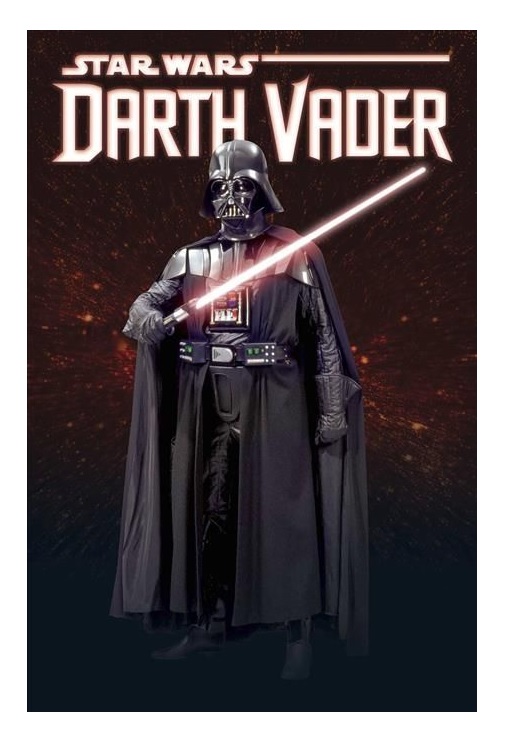 RS: Is this an ongoing series?

KG: Yes, it’s ongoing. We have a limited space we can fill, which in my head stops at the beginning of Empire, and this is the road to that point. We never know what Marvel may want to do in the future, they may want to do a Vader book set in a different period 40 or 50 books in the future.

I’m not entirely sure of the origin of the period we chose, it was definitely in place before I started talking to them about it. If you are going to do Star Wars and ask the most interesting period of STAR WARS a comic could go into? For Vader, it’s between A NEW HOPE and EMPIRE.

RS: Kieron, thanks for talking to us. DARTH VADER #1 from Marvel by Kieron Gillen and Salvador Larocca is out now!

And check out this review of STAR WARS: DARTH VADER #1 at AICN COMICS!