We’ve dreamed about making artificial people forever, whether it is the golem from Jewish folklore, Mary Shelley’s monster in FRANKENSTEIN, the droid from METROPOLIS, or the replicants of BLADE RUNNER. We update the cautionary tale with each scientific breakthrough — our doppelgängers have progressed from being clay animated by a deity, to body parts surgically stitched together and jump-started with electricity, to mechanized automata in the industrial age, and onto synthetic materials and electronics brought to life by the enormity of corporations. While there are a handful of benevolent synthezoids, e.g. Lance Bishop from ALIENS, or Commander Data, they are often saddled with an android Jesus complex — doomed to sacrifice themselves to pay for our sins. Those types are usually secondary players in a much bigger narrative. When the focus is on the miraculous creation of the robot itself, well, you’ve got nowhere to go but down from there. Things don’t always end well for walking, talking embodiments of our technological fears. But their hubristic creators almost always fare worse.

With a Siri in every pocket, artificial eyes, and a robot on the space station, we’re inching ever-closer to realizing the android dream. Clearly we’re decades away. But what would happen when we get there? If you could make an android pass for human, how would you interact with it? How would it be socialized? How would it learn to be human? These are the questions raised by UNCANNY. 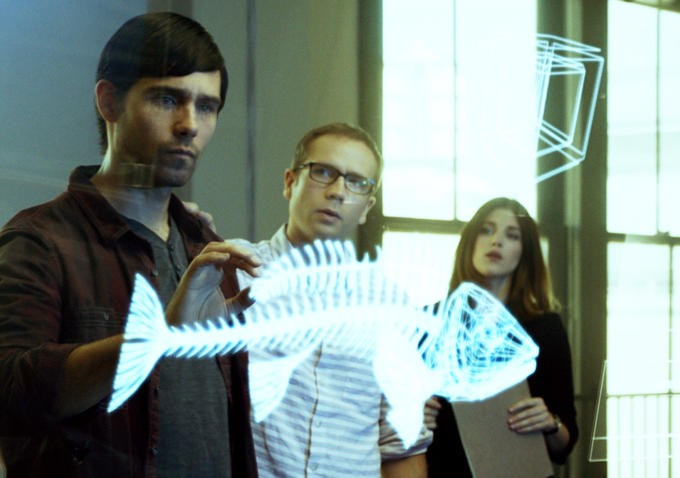 The setup is that Joy (Lucy Griffiths) is a tech journalist with a background in robotics. She gets invited to stay for a week in a top-secret compound owned by a shadowy reclusive tech magnate played by Rainn Wilson. There she meets David Kressen, a former prodigy and robotics pioneer who has spent a decade holed up in the compound working on his creation — Adam, an android so realistic that he initially fools Joy into thinking he’s human. As she stays for the week, Joy finds herself getting to know both Adam and David, neither of whom are very well socialized, especially when it comes to women. She gets into more than a few uncomfortable situations, but ultimately starts to have feelings for David. This brings out jealousy in Adam, something he’s never experienced before.

To avoid spoilers, I won’t say more about the plot, except to say that the film does go places from there, and interesting places too. It does take a turn at some point, one that maybe not all audience members will embrace. I liked it, although I did have my nitpicks with how it was executed.

In the post-screening Q&A, director Matthew Leutwyler, writer Shahin Chandrasoma, and actress Lucy Griffiths talked about the conception and execution of the film. The director asked the writer for ideas for a science fiction film that could be shot on a budget. They settled on this one, because it has three main characters and could be shot at a single location. I was surprised when they mentioned how small the budget was, because the film looks great, has plenty of technology on display, and even has nice-looking effects shots.

Interestingly, the writer, Shahin, is also a surgeon. He’s a smart guy, as you can see from his well-constructed and thoughtful script. He was only available late at night, and he and the director would have late-night Skype calls to work on the script. He even did surgery on the director, after two other surgeons failed.

In a three-character piece (Rainn Wilson is barely in the film), the acting has to be strong, or the movie just doesn’t work. Fortunately, all three main cast members are great. I had seen Lucy Griffiths before, as Nora in TRUE BLOOD, but her character is so different here that I didn’t recognize her. She plays an American, but I didn’t even figure out that she was British until she started speaking at the Q&A. Mark Webber, who plays David, was equally strong. His character is kind of smug and lacks certain social skills, but he gives it much more depth than the typical “nerd” caricature. And I have to hand it to David Clayton Rogers as Adam. Robots are notoriously hard to play without sounding comical. He plays it as an emotionless, curious child at the beginning, but one who grows into something like a jealous adolescent.

The director, Matthew Leutwyler, did some amazing things with such a small budget. The set design and cinematography look great, and the editing and pacing are superb.

I did have a few relatively minor issues with the film. A major character is essentially dismissed, offscreen, with a couple of lines of dialog in the end. This just feels wrong, especially since it is a strong character who is diminished by this choice. And some characters do some things that I feel are a bit misleading early on. I mentioned this to the director after the screening, and he had a defendable answer, though one I disagreed with.

The great thing about UNCANNY is that it is the kind of movie you want to talk about afterward. Reasonable people could disagree about the minor issues I had above, and I liked having that discussion with the director, since he had a different point of view. The movie raises many questions about what it means to be human, the pace of technology, and what it would really be like to have androids among us. UNCANNY is a rare breed of thoughtful, independent science fiction. That’s something the world needs more of — it deserves our support.