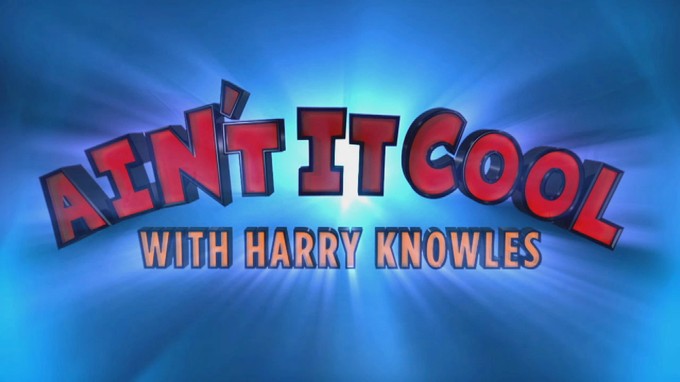 Hey folks, Harry here...  Well, it's finally time!  The First Televised Season of AINT IT COOL WITH HARRY KNOWLES is airing on KLRU-Q - (Click Here For All The Details Can Be Found Here)  On Time Warner Cable, it's Channel 20!  Tonight I'll have a short piece before the Q NIGHT AT THE MOVIES showing of CASABLANCA, which will then be followed by our Danny Boyle and Auteur episode of the show!   It's been a long time coming and I can't even begin to explain all the peaks and valleys we traversed to get this show made.   As promised, I didn't take pay on the show, instead allowing that money to go towards making the show the best it could be.   We managed to actually shoot 7 episodes instead of the promised 6, so be happy... the KICKSTARTER Funds were stretched further than we anticipated.  Amazing!!!  I will be celebrating with some friends tonight, you can bet on that!

Now... for those of you not in the local broadcast area... you thought this show was going to be available everywhere...  it will.   The magical team at KLRU and PBS DIGITAL will be working to get each of the episodes up online as soon as they can, once the EMBED appears (I'm told sometime this weekend) I will EMBED the episode here & update the headline.   However, if you want to obsessively check to see if it is available, CLICK HERE - THIS IS THE OFFICIAL PAGE

As for everyone that has been so vocal in their desire to see the fruits of our labors, I hope you enjoy the show.  It isn't like other movie shows, I don't feel.   For me, once this project became a show we were producing for KLRU, it became something I couldn't help but be super passionate about.  Having a muzzle for the last 6-8 months has kind of driven me a little crazy, but now... all is good!

You see...  When I was growing up in Austin, we basically only had 4 stations, and on Saturday mornings, after my fave cartoon shows were over, I'd flip over to KLRU for THE ELECTRIC COMPANY, MATINEE AT THE BIJOU and SISKEL & EBERT.  This was standard routine from ages 3-11.   I've always been curious how widespread MATINEE AT THE BIJOU was, because I loved it.  It attempted to recreate a classic night out to the movies...  They'd play Newsreels, Musical Interludes, Trailers, Cartoons and then a great B-movie.   It was heaven.  Then to have that followed up by Roger and Gene...  it was like being spoonfed film geekdom!   I loved it.   Now... I've managed to give back to the local community and the channel that directly led to the wondrous life I've gotten to share with all you beautiful people here on AICN for the last 19 years!