Christopher Miller and Phil Lord talk The Lego Movie 2 at SBIFF and Quint was there!

Ahoy, squirts! Quint here fresh from a Q&A with Chris Miller and Phil Lord after a kid's screening of The Lego Movie here at the Santa Barbara Film Festival.

Every year the festival holds these family friendly screenings (usually animated films that are up for Oscars) and brings in the filmmakers to discuss the movie with the kids in the audience. They call it Mike's Field Trip To The Movies. These kids (thousands of them bused in from Title 1 school) are brought in, given free popcorn and soda and get to watch the movie and submit questions to the people who made it.

This year one of the movies as The Lego Movie with Chris Miller and Phil Lord. When I got there the screening had ended and the two filmmakers were up on stage with Unikitty and some other blockhead. These things were made by the kids as gifts to the filmmakers. Sorry for the far away iPhone pic, it was the best I could do: 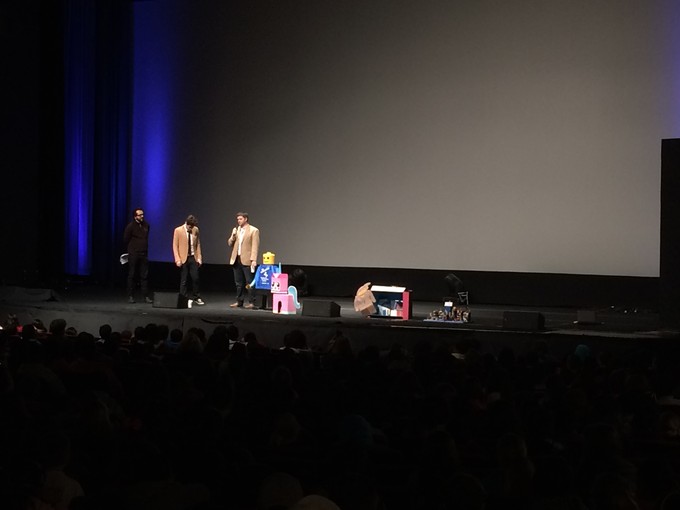 SBIFF's Roger Durling was reading some questions that were submitted beforehand and one of them was from a kid named Juan Ortiz who asked what Lego Movie 2 was going to be about and immediately Phil Lord said “Are you a blogger, Juan?”

They didn't want to go into spoilers, but they did say that they're writing the second Lego Movie right now and that it will focus on Emmett and his sister in a “weird, dystopian version of Bricksburg.” The time frame is gonna be a few years after the events of the last movie as well.

After the Q&A I was able to go backstage and chat up Lord and Miller for a couple of minutes. An older woman whose affiliation I didn't get did her damndest to make things awkward as she kept trying to take vertical iPhone pictures of the two and asking questions like “How old are you?” or “How much money did you make?” But the two shrugged off both questions and answered them with a joke.

I brought up the reaction of the 2,000 something kids in the audience and they both lit up, saying that it's always great to see the movie with kids. They called them honest. You can tell when you have their attention and when you lose them, so they can easily tell what works and what doesn't in the movie.

They also said kids are a great audience because everything they see is their favorite movie. Lord told a story about how they showed an early cut of Cloudy with a Chance of Meatballs to some friends' kids and they said “This is the best movie I've ever seen!” Then a week later they all saw Monsters Vs. Aliens and the same kids said “That was the best movie I've ever seen!”

I also brought up the strange reputation they've built up as the guys who will take a project that shouldn't work and make it great. Miller said that it is weird to get calls from producers saying “Here's a bad idea, it's perfect for you!” They also said that it's a blessing in disguise, too, because the expectation is so low on the executive side, so they have more freedom to do weird things.

The quote that stuck out for me was when Miller said “It's always better for an executive to make a decision out of greed instead of fear.” The meaning is that when you have an adaptation of giant property, a proven franchise, then suddenly the top guys start getting nervous and micro-manage everything, but when you are under the radar a little bit you have more freedom to do things in a creative, riskier way.

Anyway, it was cool to meet these guys after years of enjoying their movies and bullshitting every once in a while on Twitter. They seemed super down to earth and now I want to be their best friend. But that might just be because I want access to all their free Legos...