Jamie Foxx and Michelle Monaghan to star in the remake of the superb French-language thriller, SLEEPLESS NIGHT! 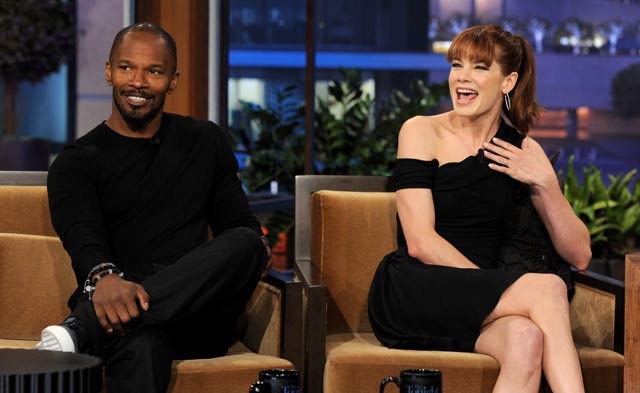 If you’ve never seen Frederic Jardin’s SLEEPLESS NIGHT (a.k.a. NUIT BLANCHE), you owe it to yourself to check it out. It’s a nail-biting, race-against-time thriller in which a corrupt cop steals a shipment of coke from a major pusher, who kidnaps his son in retaliation and keeps him hidden in a backroom of his nightclub. It becomes a DIE HARD scenario, where the cop is running around this club trying to get the coke back to the dealers to save his son without getting killed by the dealer’s goons or arrested by the Internal Affairs. It’s an incredibly efficient, kinetic actioner, and it’s so ripe for an American remake you could pick it off the vine.

So even though it took more time than I expected, it’s not a surprise that Open Road is getting a remake off the ground. A German director named Baran bo Odor (WHO AM I) will direct the script by Andrea Berloff (WORLD TRADE CENTER, the upcoming STRAIGHT OUTTA COMPTON).

The two leads have already been cast. Jamie Foxx will play the morally compromised cop hustling his ass off to stay a step ahead of his pursuers, and Michelle Monaghan will play the female lead, a naiive IA agent who, in the original, was oblivious to the corruption in her own department.

Even if it is ostensibly a action-thriller at heart, there’s plenty for Academy Award-winner Foxx to chew on in these COLLATERAL-type trappings. The relationship with his son is the emotional core of the film, and I have no doubt that emotional desperation (wonderfully conveyed by Tomer Sisley the first time around) is what attracted the actor to this project. Plus, I've seen him shoot and beat up people on film before, and believed it, which will help.

As for Monaghan, she’s a little older, and naturally less green than Lizzie Brochere was in the original, but she has the perfect mix of driven ambition and natural idealism to play the determined IA agent.

Remember when Downey thought Foxx and Monaghan’s characters were hooking up behind his back in DUE DATE? Even though they ultimately didn’t share one scene together?

I’m usually deeply skeptical of these American remakes of foreign-language films, particularly when the original is as underexposed as this one was (thus, if the new one’s bad, the legacy of the title will be destroyed), but unlike something like THE RAID, I feel like the core of the film could survive a Hollywood adaptation. It’s a easily-transplanted story based on tension, not culturally-unique martial arts or environments. Foxx and Monaghan are the kind of actors who don’t pop up in throwaway, cheapo action movies (not these days, anyway), so I get the feeling like Open Road and and Bo Odor are taking this as seriously as they should. Hopefully, this will be the kind of thing that honors the legacy of the original, instead of attempting to condescendingly dilute it for audiences they assume would not be able to read the subtitles.

But still, I implore you to check out the original, particularly if you are partial to DIE HARD clones or intense action-thrillers in general. Or drawn-out fights involving kitchen appliances.