Hey folks, Harry here with the 3rd Picks & Peeks of 2015! There’s some really awesome releases this week, and if you haven’t heard of them… check them out, THE PALM BEACH STORY can change your life. Seriously. It leads to good things. Any way, just like on all these, the images and links take you to Amazon, where if you’re so motivated you can learn more about the title, or purchase the item for home delivery, which helps to continue to support my best efforts on this column, now in its 11th year. Now, let’s get this started with Luc Besson’s latest… 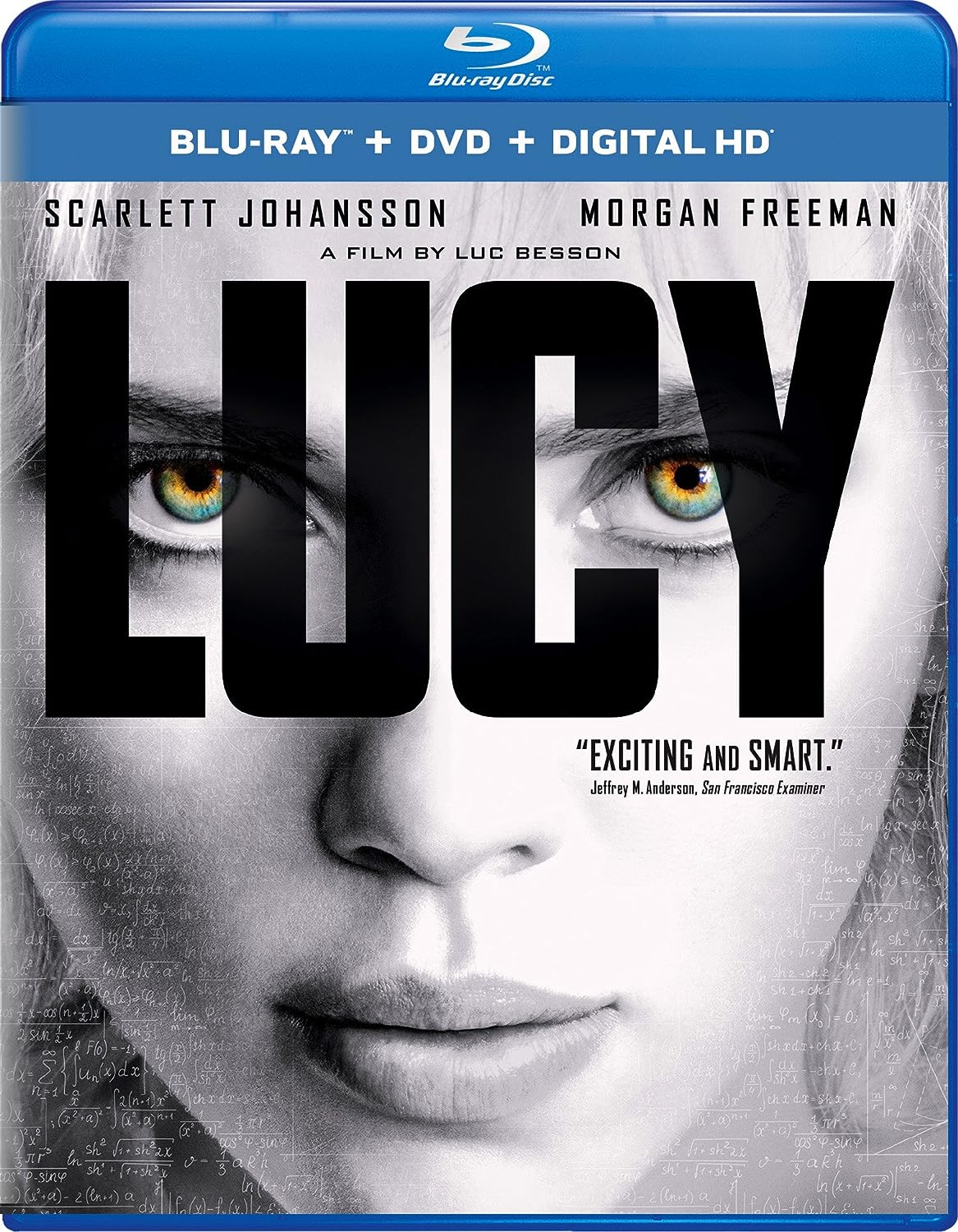 We’re beginning to see films based upon possible upcoming scenarios. The complete mapping of the human brain, the human genome project, genetic modifications and… well, a whole lot more are all coming down the road. Ultimately, LUCY is a transhumanist work of pulp sci-fi… Something that Luc Besson has been exploring throughout his career… the perfect woman. The supreme being. This isn’t Scarlett Johansson’s first swing at this kind of material either. Both HER and UNDER THE SKIN have Scarlett becoming more than your typical girl next door. She’s obviously intrigued by the subject – and I think anyone that reads FUTURIST & OMNI, as well as a host of University Websites and are addicted to TED… Well, a film like LUCY feels less “LOAD OF BULLSHIT” than it might to some others. The main thing though – is LUCY is another super heroine film from the mind of LUC BESSON – and I will never tire of this theme. The film looks and sounds utterly exquisite at home on Blu Ray! There’s only about 25 minutes of extras on here, 16 of which has Besson and cast going through the making of. The other 9 minutes has Morgan Freeman and Luc Besson talking with a pair of scientist about the science of transhumanism. Luc Besson continues to kick all the ass! 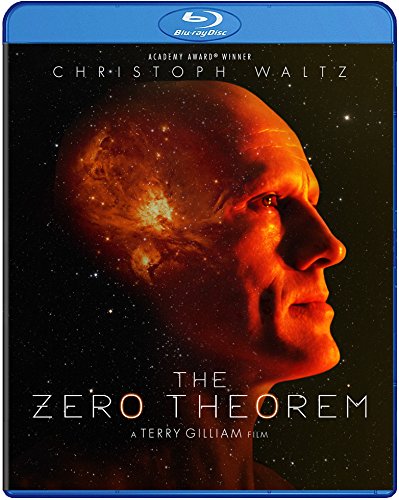 Cinematic Visionary Terry Gilliam’s latest film stars Christoph Waltz and if you really need to know another detail, I might have to question your dedication to cinema. I feel both names now command our attention like very few others. Waltz’s latest turn in BIG EYES was tremendous, but I really do feel that his role of Qohen Leth… if this film qualifies for this award season… I’d put Waltz against every other performance of the year in this. He is just amazing. I declared this Terry Gilliam’s best film since BRAZIL and I absolutely believe that. The movie is just tremendous science fiction, the film is loaded with pathos and soul and beauty! It’s also a likely societal nightmare we could be headed towards. Gilliam is working in top form here! The wicked sense of satire is wielded to perfection here – and the extras on the Blu are pretty sharp too! There’s over 18 minutes of BTS and Set Interviews with talent. Then around seven minutes of VFX making of. Fun stuff here. Costumes get over 28 minutes of time – and really, when you see the movie, you’ll get why. This is another category that I would’ve nominated this film for. Then you get over 18 minutes taking a detailed look at the sets and production design. Over all, an outstanding disc! 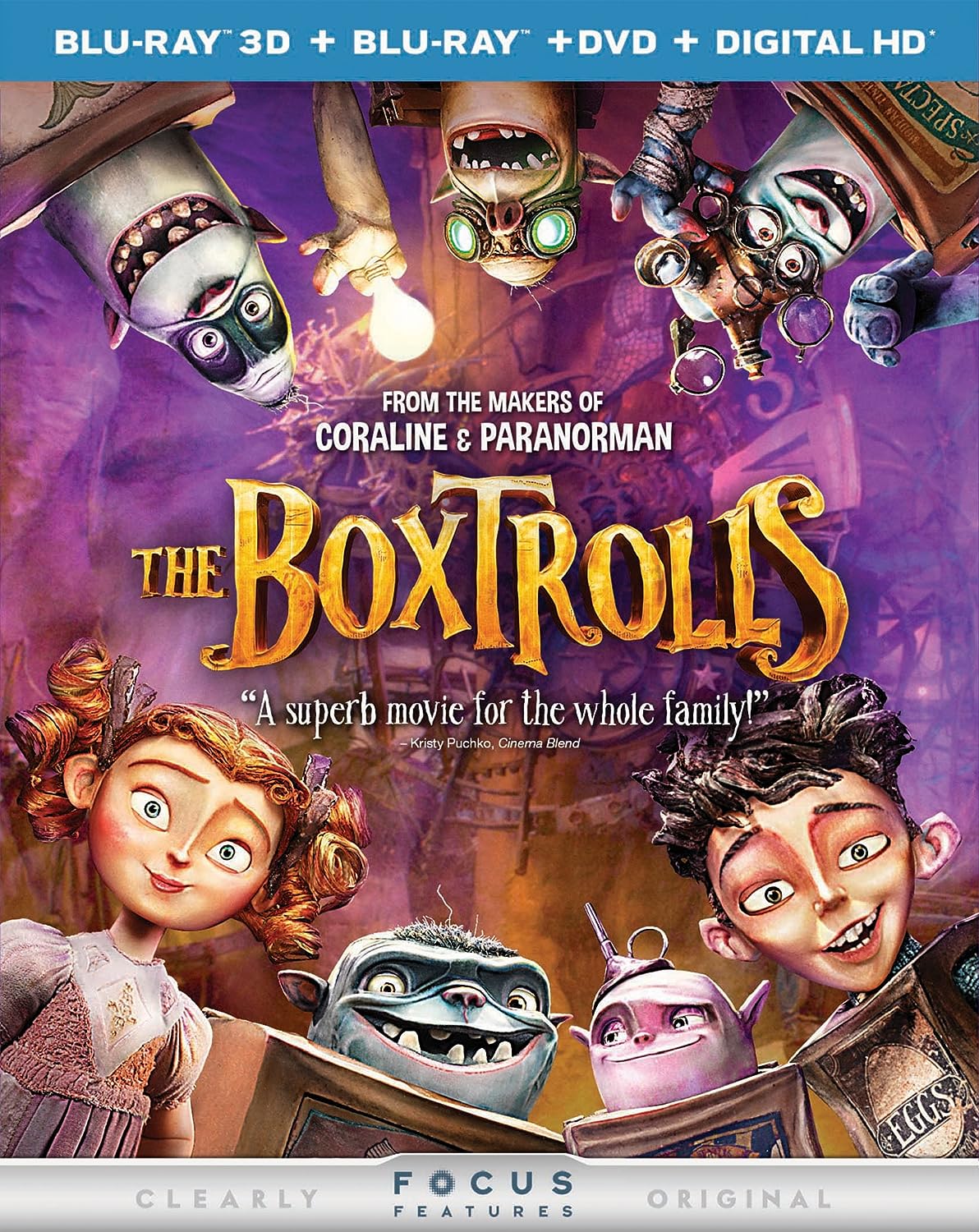 Boy… let me tell ya. If you have a 3D Projection set up… THE BOXTROLLS is going to blow you away visually. It’s just a marvel to gaze upon. All that exquisite painted and created by hand detail – and looking so wonderfully dimensional… and then… oh yeah, there’s a story – and it’s wicked crazy cool and awesome! With the fantastic vocal talents of Sir Ben Kingsley, Maurice LaMarche, Nick Frost, Tracy Morgan, Jared Harris and the army of talent that create every aspect of what you see in front of you and move things like toys and it’s just fantastic. I mean, You look at entertainment like this and you just realize how incredibly lucky we were that Tim Burton made NIGHTMARE BEFORE CHRISTMAS and proved the medium in a manner that has given us this form and allowed it to flourish. I still want a great epic stopmotion / live-action film done to look amazing. Someone will do it someday and make it badass. Just because, you could. Because it’s an artform that must continue and thrive. The depth on this 3D is fantastic! Really beautiful. Now… you get the Audio Commentary by the co-directors Graham Annable and Anthony Stacchi. Then you get 13 minutes of the artistry of the production featurettes. I love these. Then you get 33 minutes of a 5 part documentary about the making of the film. Then there’s some Preliminary Animatic Sequences to the tune of 17 minutes that are really truly neat. Love seeing storyboarded sequences! Let’s hear it for Laika!!! 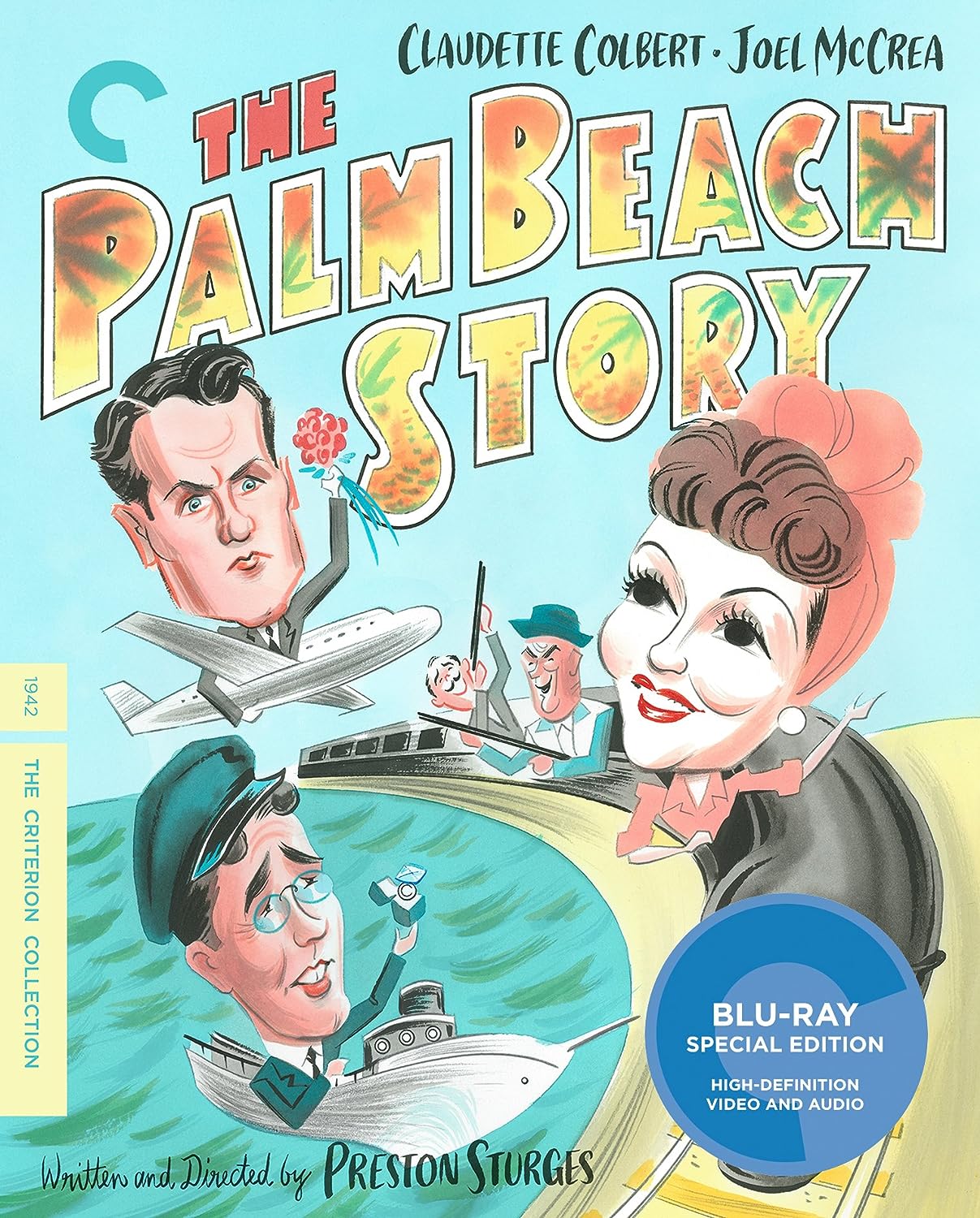 There’s no shame in not knowing how Preston Sturges is. But once you discover the Preston Sturges movies, there’s a shot of pure cinematic love that you’ll never stop hitting. You see… it’s the dialogue and the way it is delivered. It has a rhythm that weaves a spell on you. Sometimes you feel that way with a great writer, but if that writer knows exactly how to direct it and capture it… there’s magic unlike anything else. The film stars the great Joel McCrea and Claudette Colbert. These two have been great in so many films individually that it’s kind of ridiculous. But they’re great her but written out like this: GREAT! They’ve fallen upon financial hardships and decide they need to go to Palm Beach and get a divorce. Let’s just say… Hijinks occur aplenty, shall we. There isn’t a twist you should have spoiled. If you discover this film for the first time on Criterion Blu – consider yourself lucky. I first saw this on broadcast TV back in the seventies, then finally when the Austin Film Society did a big theatrical series of Preston Sturges screenings, I finally got to see them on the big screen. But this print is perfect! Plus, you’ll get a wonderful 17 minute lesson from Film Historian James Harvey who gets into Sturges’ Paramount years and is quite interesting. Then Bill Hader does 10 minutes of worshipping upon Preston Sturges, because… Sturges needs to be worshipped by film geeks! It is our duty! Then there’s a 30 minute radio adaptation of THE PALM BEACH STORY. But my fave, the SAFEGUARDING MILITARY INFORMATION Short Doc written by Preston Sturges is kinda priceless. If you love Sturges, it’s kinda great. Once again, Criterion rules! 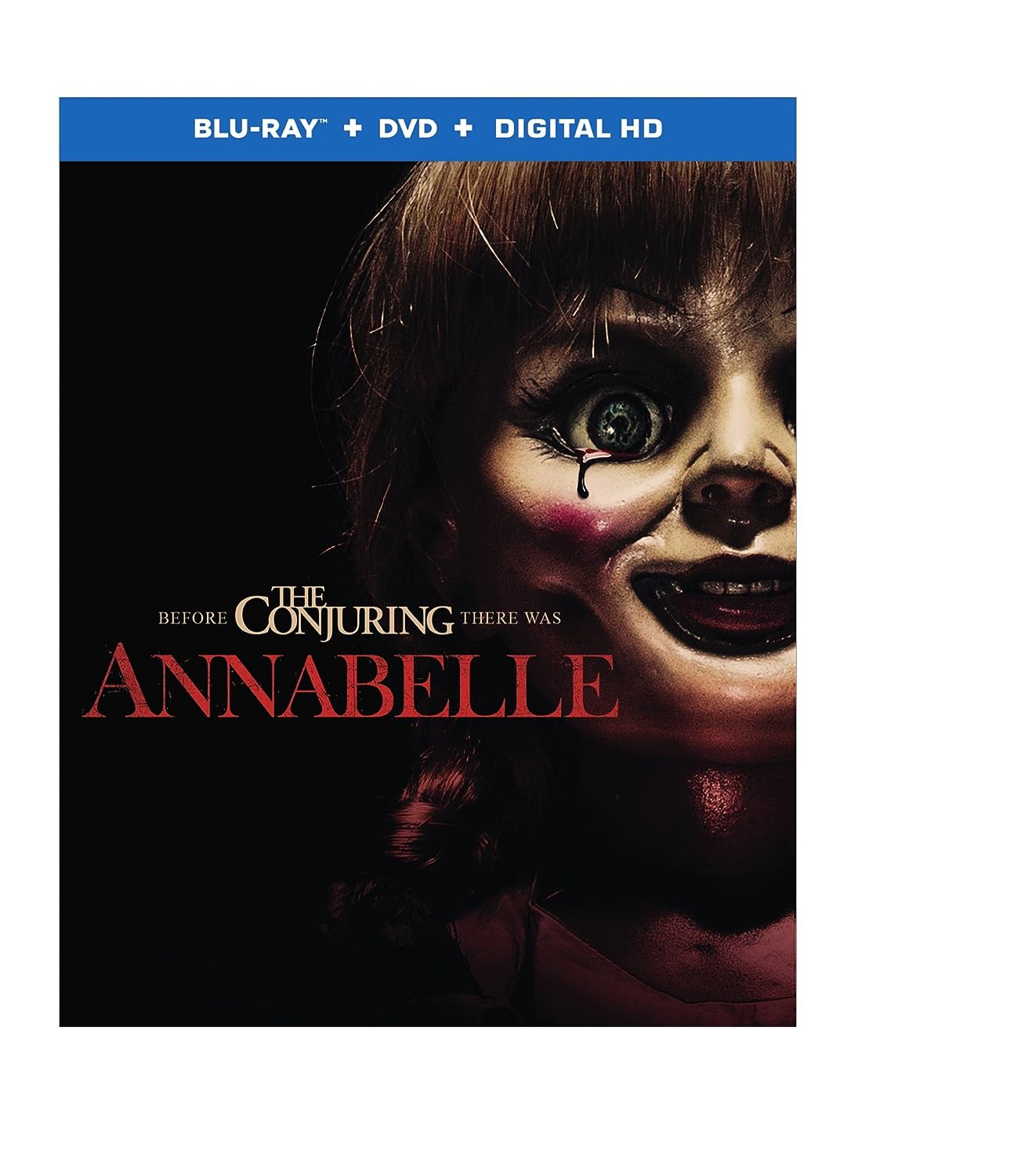 I like the Annabelle doll, but this movie kinda sucked balls. I mean, James Wan’s THE CONJURING… it’s the good shit, the sort of horror we crave. This was uninspired total bullshit belly flop of a fucking horror spinoff. And it should have ruled. I mean… there’s no way with that doll you can make a bad film, but they did. And this quick cheap knock-off suckered us into see it again. This one was a heartbreaker from last year. A film that was high on my, I bet it rocks, but then it most certainly does not. That said, let’s look on the positive side of things. Watch MAGIC from 1978, ASYLUM from 1972, DOLLS from 1987, BLACK DEVIL DOLL from 2007, the CHILD’S PLAY franchise, DEAD OF NIGHT from 1945, DEVIL DOLL from 1964, MAY from 2002, PIN from 1988 or friggin BARBARELLA man… I mean, there are such better scary doll movies. Heck, that freaky ass clown doll from POLTERGEIST might freak me out most… or the glass eyed Howdy Doody doll in the closet staring at the back of my head as I type this. Fuck, it’s still there isn’t it. God I hope it is still there. These thoughts are actively more frightening than anything in ANNABELLE. Now the Blu ray has a nice presentation of the film, there’s 21 minutes of deleted scenes that help the film in no tangible way and I could have lived without witnessing. The BTS Featurettes are also pretty lame. Which is a shame, this movie did make serious bank, but they still kinda phoned it in on the special features. But then, this project had everything going for it, but a good movie. 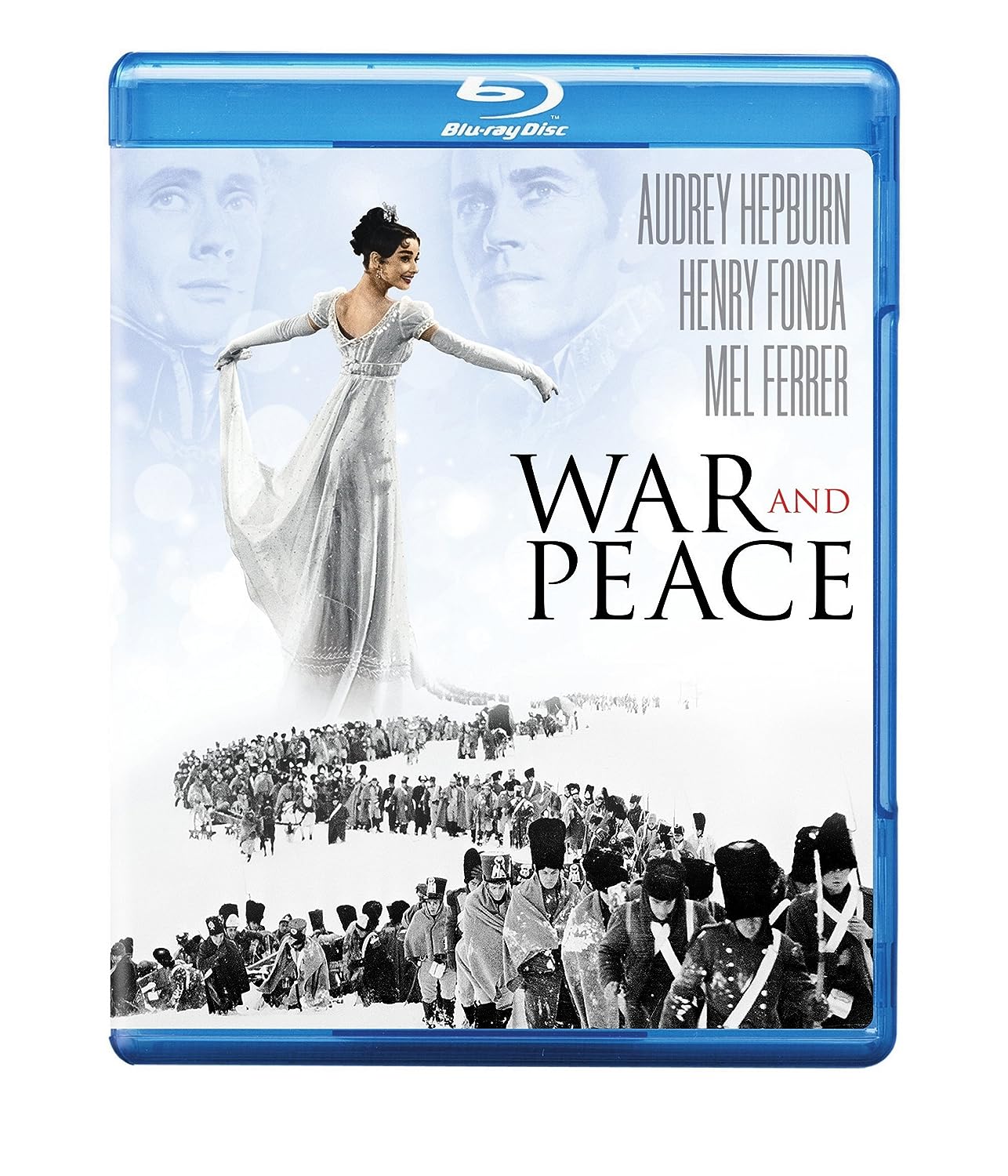 I like King Vidor’s WAR AND PEACE. I like the quality and style of the production. I love Henry Fonda in the film. Audrey Hepburn is luminous in the film. Mel Ferrer makes a great Prince. But make no mistake about it, the 1966 Russian adaptation by Sergey Bondarchuk is the very best version made out of the staggering novel by Leo Tolstoy. But then that film is 7 hours long too. But that’s not really a problem for our long form story loving audiences of today. I am a tad disappointed though with the Blu. It’s the best this film has looked at home video, but this movie was shot by the great cinematographer, Jack Cardiff – and the print isn’t as great as it should be. This should be done better. There’s also zero extras. This deserves better. 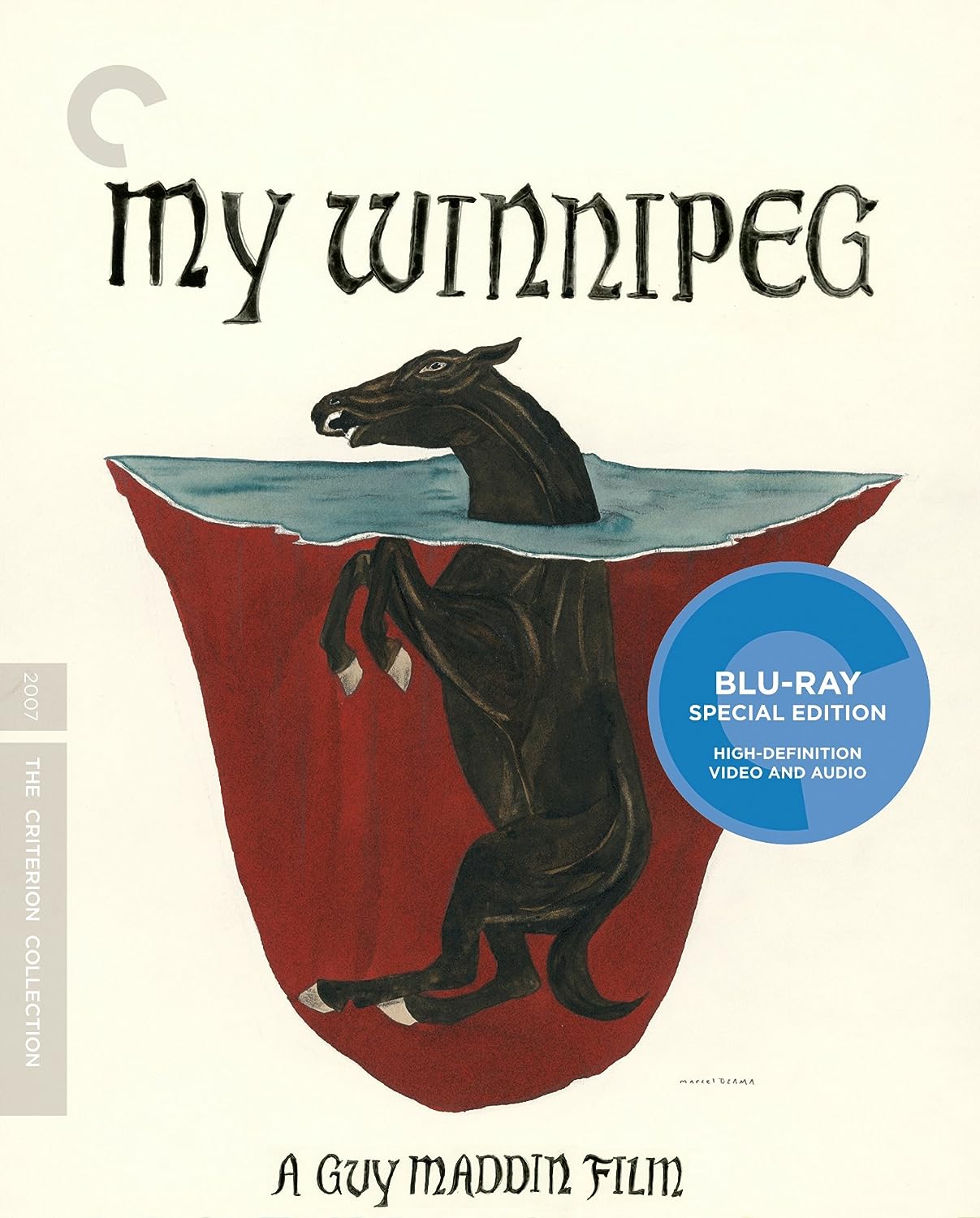 I attended the WINNIPEG FILM FESTIVAL before Guy Maddin’s MY WINNIPEG was made, and was already a huge fan of his from DRACULA: PAGES FROM A VIRGIN’S DIARY and I love the surrealistic vision of Guy Maddin as a filmmaker, but Guy Maddin reliving his childhood by casting actors to play his family, except for his real mom, and the way it just twirls with reality and surreality – well, it’s delightful. But then that’s exactly what Guy Maddin does best! There’s 5 additional Guy Maddin short films! There’s a conversation between Guy Maddin and Robert Enright. Plus there’s more! If you like things a bit left of center, if film is more flexible for you than just box office popcorn. Give this a shot, it could capture you in its trance! 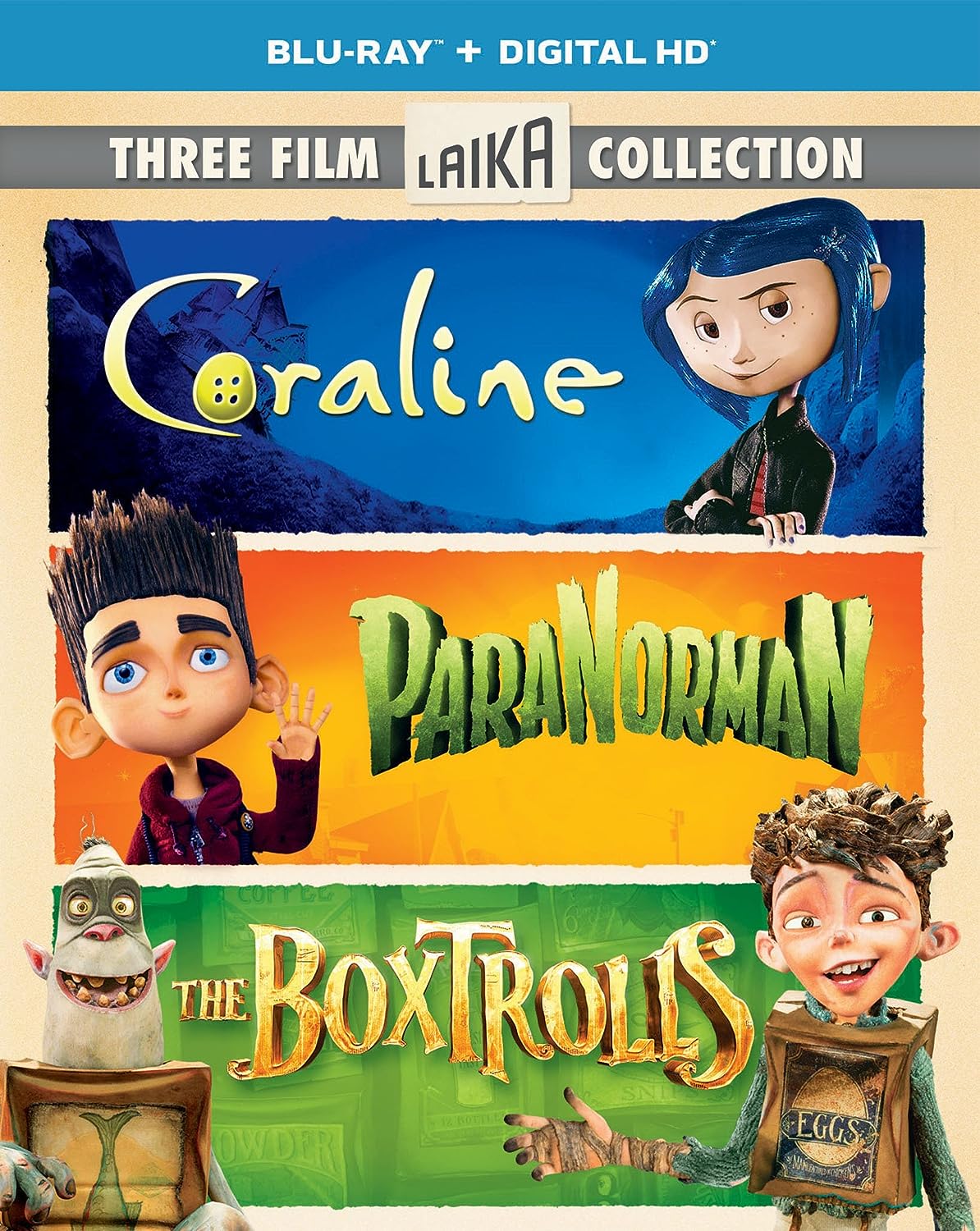 Now if you can’t take advantage of the amazing 3D Blu of BOXTROLLS or CORALINE or PARANORMAN and you find that you don’t have any of these awesome movies… well… This is just a repackaging of the 3 stand alone film’s Blus – for just under $30 bucks. These 3 stop motion films are stunning works of artistry and infinite patience. They’re also absolutely 3 fantastic films!


That’s it for this week… Next is Father Geek’s 70th Birthday & our next Pick & Peeks, where we’ll be looking at FURY Blu, JUSTICE LEAGUE: THRONE OF ATLANTIS Blu, THE JUDGE Blu, THE REPLACEMENTS Blu, HENRY V (1989) Blu, THE BOOK OF LIFE 3D Blu, LA CIENAGA Criterion Blu, THE USUAL SUSPECTS Blu, WHY DON’T YOU PLAY IN HELL Blu, PORK CHOP HILL Blu, A HOLE IN THE HEAD Blu, JIN-ROH: THE WOLF BRIGADE Blu, OPEN WINDOWS Blu, THE REMAINING Blu, KING: THE MARTIN LUTHER KING STORY (1978) Blu, GOING UNDER Blu, AMAZING GRACE Blu and that’s about it!