RUMOR: Will BATMAN V SUPERMAN be split into two parts?? Also, when should we expect the first official teaser?? 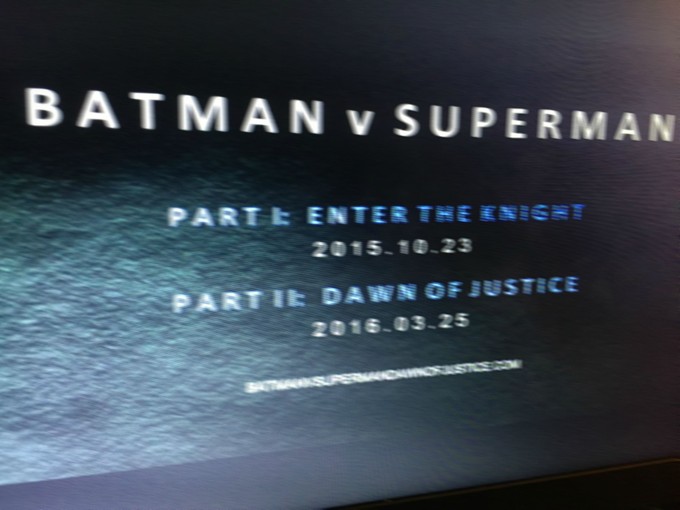 That mysterious image, which popped up on Imgur this morning, is allegedly taken from the upcoming teaser to BATMAN V SUPERMAN, and drops a bit of knowledge that has yet to be announced by the studio: that the film will, like THE HUNGER GAMES: MOCKINGJAY and AVENGERS: INFINITY WAR, be split into two parts.

If this is to be believed, PART I: ENTER THE KNIGHT will be ready for theaters this October, while PART II will have the subtitle (DAWN OF JUSTICE) and release date (March 26th, 2016) that we already knew about.

While we should absolutely take this with a grain of salt and wait to hear official confirmation from WB, given how many Photoshop-rendered dreams of this movie bounce around the interwebs, this move doesn't seem entirely out-of-the-question. We knew that the shoot for this was massive, rumored to be 10+ months long, and that a back-to-back shoot with JUSTICE LEAGUE was once on the table. We also were aware that getting Batsy involved in this DCU was a priority, and that there was question as to whether his presence (and those of his fellow JLA members) in BVS would feel like it was forced into what would've otherwise been the MAN OF STEEL sequel. Giving Batfleck something of an "intro" movie would allow the character to breathe before pitting him against Henry Cavill's Kal-El, and would establish him as his own entity in this rapidly expanding universe.

Then again, the idea of them finishing up their work 5 months ahead of the previously-announced schedule seems…outlandish at best, unless there was some serious, SERIOUS prioritizing on the VFX/editing front.

The teaser is rumored to be attached to WB's JUPITER ASCENDING (releasing on February 17th), so we'll certainly know the veracity of this info before then, but for now, all we got is this iPhone pic to go on. What we do know is that the teaser won't be anything like the Comic-Con clip, seen below in blurry shaky-cam:

BATMAN V. SUPERMAN: DAWN OF JUSTICE will almost certainly be flying into theaters on March 25th, 2016, and there's an extremely remote possibility it will be preceded by BATMAN V. SUPERMAN: ENTER THE KNIGHT on October 23rd of this year.