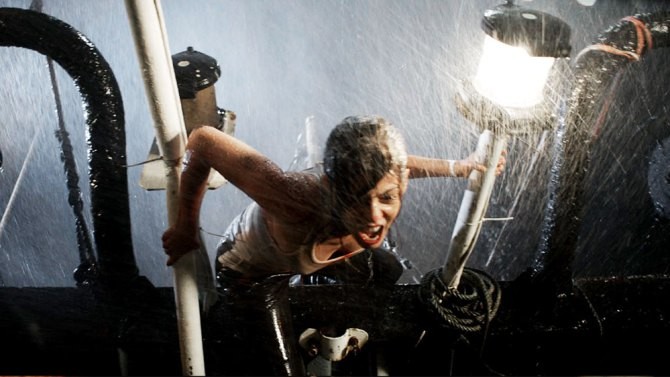 [REC] was a bright and innovative spot in horror when it debuted in 2007. The combined efforts of Jaume Balaguero and Paco Plaza offered something unique, original, and terrifying. The film embraced found footage long before the trend exploded on the horror scene with 2009's PARANORMAL ACTIVITY, and to great effect. Seeing the events unfold through the lens of Angela Vidal's camera lent an authenticity to the proceedings in an exciting and horrifying way.

Several sequels followed - [REC] 2 picked up directly after the events of the first film and expanded upon its mythology. Paco Plaza flew solo on [REC] 3: GENESIS, which left the apartment building in favor of a wedding, and took a much more comedic approach to the story. Balaguero returns to the series with the solo-helmed [REC] 4: APOCALYPSE. Here, he leaves the comedy and slapstick at the door, and returns the series to a more serious tone.

The story opens with Angela Vidal (Manuela Velasco) being rescued from the apartment complex. She wakes up on a ship that has been taken over by scientists and military personnel, and is being used as a quarantine facility while the doctors attempt to understand and cure virus. What is envisioned as a safehaven quickly turns into a floating steel trap, as the virus spreads and begins to infect everyone on board.*

In this installment, Balaguero continues along the line that Plaza employed on [REC] 3, eschewing the found footage angle in favor of a more traditional narrative approach. And though this certainly isn't a comedically-centered story like GENESIS was, we are not going back to the fast-paced, terror-filled horror vibe either. Here, Balaguero has chosen to adopt a more action-thriller tone, relying more heavily on adrenaline and action sequences than jumps and suspense. The film is not as tightly-constructed as its predecessors, and takes a bit of time to set everything up before launching into the highly-anticipated moment when the virus begins taking over and everything goes straight to hell.

The setting lends itself nicely to a claustrophobic atmosphere, with the long, twisting hallways of the ship offering little means of escape as the action ramps up. The first two films made the audience fear what could be hiding in the dark, but here, the infected are largely on display in the harsh lights of the ship, offering a great view of the makeup and any ensuing gore shots as the blood starts to fly.

Particularly entertaining is seeing Angela graduate from being surviving victim to being certified badass. She steps up and is all about the zombie slaying, and the results are pretty great. And how could they not be, when her weapon of choice is a motorboat engine? It is a fun transition, not only for the film, but also in the character's evolution over the course of the series.

Disappointing, however, are the changes that Balaguero makes to the mythology. Some of the more interesting elements are either tossed out or passed over early on, in favor of a new, rather bland source to the outbreak. The mythos was one of the more interesting and creative aspects of the series, and seeing it unravel in this last chapter really lets the air out of the story.

That aside, fans of the series will have plenty to enjoy, even if the final chapter doesn’t live up to the bar that was set by the earlier films. While light on scares, it has some great gory moments, and the aforementioned boat motor weapon is something that you really can’t go wrong with. It certainly isn’t the best entry into the series, but that doesn't mean you won't have a good time.

*You really shouldn't bring monkeys infected with the violent zombie virus on board with you.