Quint chats with Martin Freeman about all things Bilbo!

Ahoy, squirts! Quint here. I had the chance to speak with Martin Freeman over the phone while he was traveling around the globe promoting the final Hobbit film and I was at home recovering my recent LASIK surgery.

As you may remember, I spent a stupid amount of time of these films and filed a ton of reports of the experience. I never really got to know Martin very well, but we chatted pretty constantly, especially after sharing a scene together when Peter decided I was the best person to play a portly fish monger in Hobbiton. He's a funny guy, but also very insular. He took his craft very seriously, but that'd only make his constant bird-flipping all the funnier because it was unexpected from such a serious, in-the-moment actor.

Below we talk a little bit about the split from two movies to three and what that entailed for him personally, his experiences working with Peter Jackson and a lot about his process as an actor, in particular how important spontaneity is to his work. He's also pretty blunt about Bilbo taking a back seat at this point in the story. 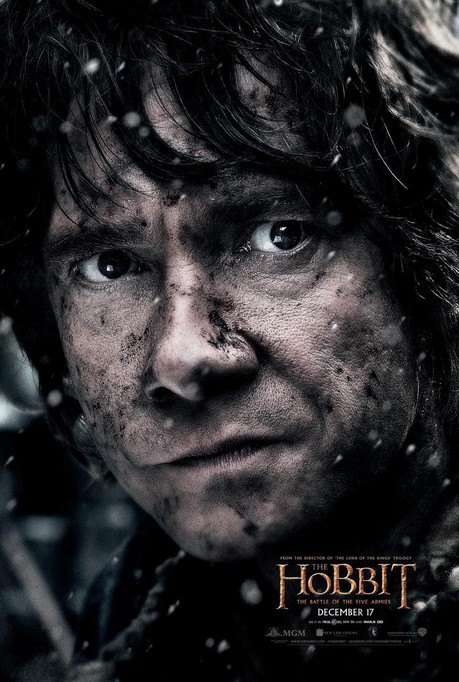 Quint: Before we get going on The Battle of the Five Armies, I wanted to first say how great I thought you were in Fargo.

Martin Freeman: Oh, thank you. I very enjoyed it. Thank you very much. I was quite pleased with the results.

Quint: Lester is the best weasel I've seen in a loooong time.

Quint: I love that pretty much every episode I went from “No, I see where he's coming from... I'm kind of with this dude...” and getting into arguments with people about it and then the next episode would come on and I'd go “Oh, no! Everybody's right. He's a horrible human being!”

Quint: Last time that we talked about Hobbit stuff was on the set way back at the end of the production. Back then it was just a rumor going around the set that they were considering breaking it up into 3 movies.

Quint: I've always been kind of unclear on what the decision entailed for you and the other actors. I know that the first cut of Movie 1 when it was just two movies was very long, so I guess I want to know if the further split meant significantly more work for you or did they just end up pretty much having enough material for three films in what they shot.

Quint: Did that give them a chance to give Bilbo anything extra to do in The Battle of the Five Armies that wasn't already planned?

Martin Freeman: Weeeeeeeellllll, um... You've seen the film. No, obviously not. Not a huge amount. No. I don't think really. Maybe there was a plan or a hope or maybe it'll be in the extended cut, but no, I didn't really have a whole lot to do in this film, particularly. No.

Quint: Your meatiest scenes are in the first movie, like the Riddles In the Dark scene, but this one is all about the emotion and the payoff...

Martin Freeman: Yes. No complaints. I just wasn't run off my feet, you know.

Quint: While your showy scenes are in the previous films, you do some great work here. The goodbyes in particular, both permanent and temporary. I like that you played these moments more subdued. Since Bilbo is a bit of an exaggerated character I think it had a lot more impact that you chose to go quiet for those moments. No big Oscar reel camera pulling up into the sky and you cry out in anguish type stuff.

Martin Freeman: I tried! I tried to make it as tacky as possible. Bilbo, I think, is all the good parts of people, so he's not too showy. He's not grandstanding. I think when he's saying goodbye to those new friends he's made, which by now are old friends, it's completely genuine and very heartfelt. He knows that he probably won't be hanging out with them again, but they touched his life and they genuinely meant something to him. So, it did feel important... well, obviously, every moment feels important to get right, but it felt important to get the tone of that right. From my point of view, I wanted it to be a good farewell between him and the dwarves.

I like those last seconds that Bilbo has back in Bag End. Not what I'm doing, but what the film is doing is very nice. When it hands over to Ian Holm is a lovely surprise.

Quint: When you read the script initially you had to see it becomes Thorin's story at some point, so did you figure out immediately how to play the character so he didn't just disappear into the background?

Martin Freeman: I tend never to know how I'm going to do anything, really, until the day of doing it. I always leave space for God to walk through the room, you know? I always want there to be space for the unknown to happen, unknown even to me. It's reactive. Bilbo's a very character and I'm quite a reactive actor, I suppose. I believe that's where interesting stuff happens, when you genuinely listen and are actually there and available for stuff to happen.

Yeah, it does become Thorin's thing, so yes, Bilbo and me react accordingly.

Quint: Bilbo's reactionary, but he takes charge here. He's the conscience of the group. He's the only one is willing to move against Thorin for his own good. If Thorin was shooting up, Bilbo'd be the one to stage the intervention. That's gotta be something for you to work with in this film. You get to be Jiminy Cricket.

Martin Freeman: Exactly, a cute little thing... You try to stop short of being annoying, you know what I mean? It's true. You don't want to be an annoying cute little hobbit. I don't want to be that. Sometimes there area characters whose function can go close to that. He's little, he's sweet... which is fine. I like little, sweet things, but it's just trying to stop short of being cloying.

Quint: It was an interesting experience being with you guys through so much of the production. As a movie geek you know they shoot movies out of order all the time, but you don't really register how difficult it is to establish a flow of continuity until you see it with your own eyes. You mentioned your final moments at Bag End... I was in Matamata with you guys and saw then shoot you running off to go on the adventure one day and the next you returning home and having to do your big, final, emotional line.

Martin Freeman: I know! The whole thing, shooting out of sequence, is part of the job, but some days it's easier than others. There are some times where you really do have to dig deep and rely on technique and professionalism and imagination and all that. And there are days where you really don't know what's going on. As you know, Pete and Jabez (Olssen, the editor) have a great capacity for having that information, literally at their fingertips because they can just pull (previous shots) up, but Pete has a terrifying memory. He has a really good store of information so you can go “So, what just happened in scene 185?” and he'll go, “Remember, that was the bit where...” It's like, Christ... how's he remembering this? I mean, I know he's in charge... but still. He has a great capacity for remembering stuff. 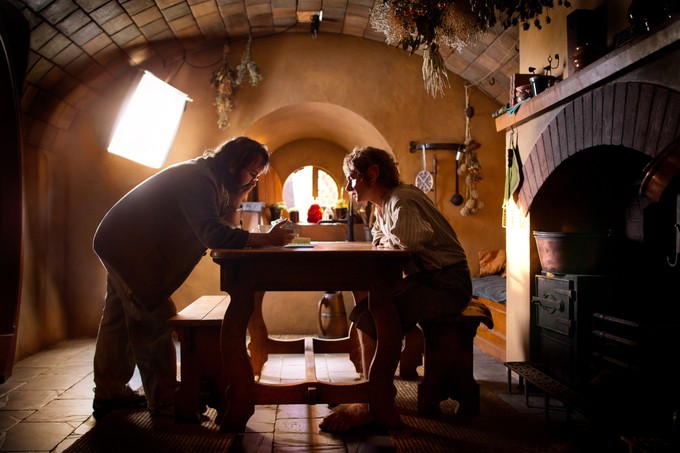 Quint: He was probably making a lot of that up. I mean, you probably didn't go double check the scene number after he said all that...

Martin Freeman: (laughs) That's true. I didn't. I would just trust him. I found that to be the safest policy.

Quint: One of my favorite aspects of getting to spend so much time hanging with you guys on The Hobbit was sitting in the editing room. I've been on many, many set visits, but nothing quite so in-depth...

Martin Freeman: And giving us your famous fish server, which is what the public has been crying out for.

Quint: Right? Finally that outcry has been satiated. I pop up in this film as well, but not quite so spectacularly.

Martin Freeman: Oh, where are you in that?

Quint: I fight for Bard in Dale. You'll see a tubby dude waddling past the camera looking pissed off and ready for war at some point.

Martin Freeman: You're on the right side, at least.

Quint: But talking about the editing room, I was there when Peter and Jabez cut together the scene at Bag End when you were reading over the contract. I was surprised seeing just how many options you gave them. This goes back a little to what you said earlier about finding stuff in the moment, but I found it really interesting how much of a broad range, from serious to silly, you gave them. And because Peter has a crazy sense of humor he almost always went with the laugh.

Martin Freeman: Two things: I want to have choice and I also don't want to bore myself. Basically I'm a theater actor at heart and even though we're not making this film for the grips and the props boys I still have enough madness in my to want to entertain the grips and the props boys. Not every take for its own sake, but I do think it keeps me awake, it keeps me on my toes to keep it alive. That's why I do it.

Quint: Thanks so much for taking the time to talk to me today. I know you're crazy busy right now.

Martin Freeman: Thanks for waiting for us, as well. I appreciate. 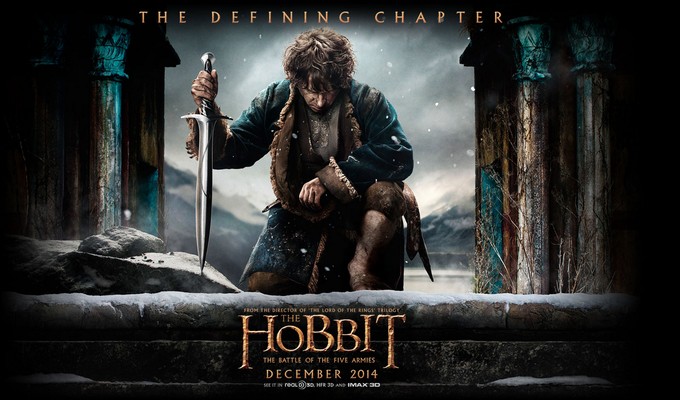 I'll be back soon with one more Hobbit chat, this time with Thorin himself, Mr. Richard Armitage. It's a tad spoilery, so I'll let those who may not know how this story wraps itself up have a chance to see it before posting.