Two New Clips From, And Some Info About, This Weekend’s LEGO STAR WARS: THE NEW YODA CHRONICLES!! 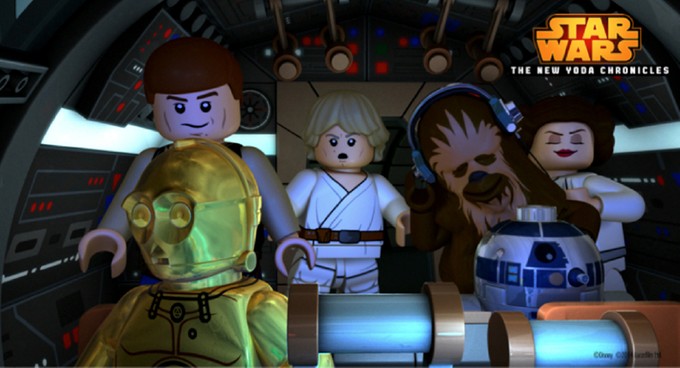 There’s a new installment of LEGO STAR WARS: THE NEW YODA CHRONICLES transmitting on Disney XD this weekend.  Below you’ll find snippets of a press release telling us what to expect, and two clips from the show.

I’m not in love with the duel sequence, but the Vader hissyfit sequence is pretty funny…

See Vader vs. Luke Skywalker in LEGO STAR WARS: THE NEW YODA CHRONICLES “CLASH OF THE SKYWALKERS” (the final episode of the four-part series) premiering this Sunday, November 23 (12 noon, ET/PT) on Disney XD.

And if you are dissatisfied with the ending of the episode… verified WATCH Disney XD viewers can access the episode to view an exclusive alternate ending beginning SUNDAY NOVEMBER 23 (12 noon, ET/PT)!!  WATCH Disney XD allows fans to watch a live stream of the network, as well as popular episodes on demand via tablets, phones, desktops and set top boxes.  It is available in the Apple App Store, Google Play and Amazon Appstore and at WatchDisneyXD.com.

If you missed the previous chapters of “Star Wars: The New Yoda Chronicles,” you can catch all 4 of them Sunday night on Disney XD…

In case you’re not up to speed on the NEW YODA CHRONICLES titles issued thus far, Dinsey XD sent long this refresher timeline…

ESCAPE FROM THE JEDI TEMPLE:  Luke’s immaturity nearly puts him and his friends in the hands of Darth Vader.   Seeing this, Yoda and the Ghost of Obi-Wan decide it’s time to further Luke’s training by bringing the last of the JEDI HOLOCRONS out of hiding -- but first they recall the thrilling heist they pulled to free the Holocrons from the Temple in the dawning days of the Empire.

RACE FOR THE HOLOCRONS:  Obi-Wan tells Luke of the existence of the Jedi Holocrons and urges him to go to Tatooine where they’ve been hidden all these years.  Unfortunately for the good guys, Darth Vader is also on the hunt.  A frantic race to get to the buried Holocrons ensues -- a race Vader wins.

RAID ON CORUSCANT:  The Emperor uses the information on the recovered Holocrons to launch devastating attacks on planets sympathetic to the Rebellion.   Luke knows there’s only one solution: a daring raid on Coruscant to get the Holocrons back.  In the end, Luke makes the boldest move of all: destroying the Holocrons so the Emperor can no longer use them.   Unknown to Luke, however, R2-D2 has saved one last Holocron -- which just happens to “star” the young Anakin Skywalker.

CLASH OF THE SKYWALKERS:  The enraged Emperor sends Darth Vader and his entire fleet to find and destroy Luke as revenge for his destruction of the Holocrons.  Luke, however, finds inspiration from the last remaining Holocron -- a daring move pulled off years earlier by his father, Anakin.  The emboldened Luke uses Anakin’s daring move to lure Vader and the Imperial Fleet into a trap that could turn the tide for the Rebellion… or lead to disaster.