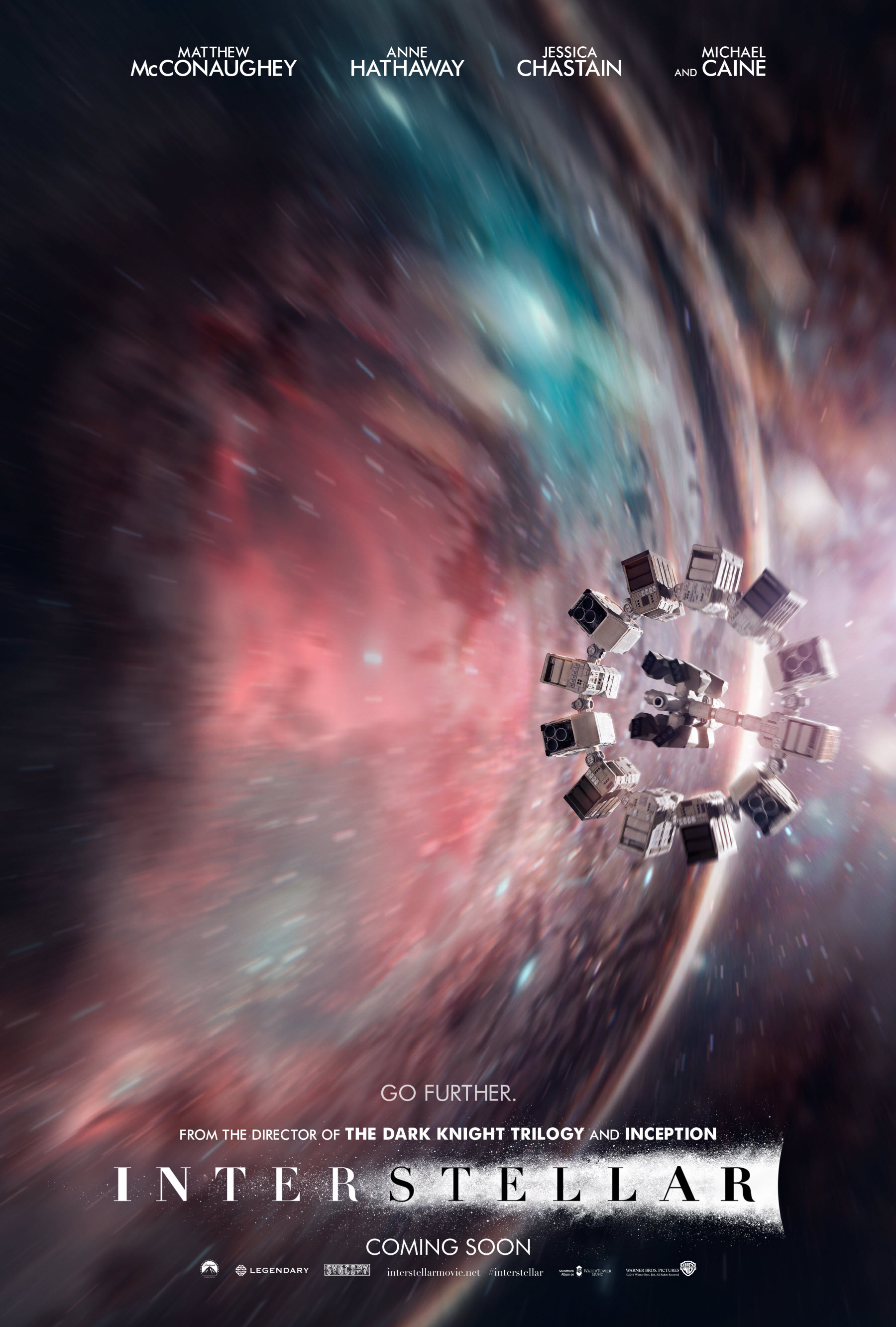 Wait, what?  It didn’t change the orbit of the planet?  Well, no.  Is it the ultimate cinematic experience? I’ll grant that it has some pretty amazing moments, especially in IMAX (although the lack of consistency with the aspect ratios is irritating.  I may see it again on a regular screen to get a more steady viewing), but there’s no “Star Destroyer flying overhead” moment in the movie.  Christopher Nolan’s insistence on realism in the visuals is meant to evoke awe, but because he doesn’t let the visuals play out (like in Nolan’s obviously largest influence on INTERSTELLAR, 2001: A SPACE ODYSSEY), the audience is left wanting more.  Should you see INTERSTELLAR?  Of course.  That’s obvious.  There’s a lot going on, and Nolan fills INTERSTELLAR with so many ideas in the first half that you almost wish the movie would slow down a bit and let us digest all this information.

But then we get the second half, and the forced sentiment of INTERSTELLAR becomes cloying and doesn’t gel with the tones and the themes of the first half of the movie.   I’m trying my hardest to review the movie I saw and not the movie I imagined or hoped to see, but the fact remains that what Nolan struggles hardest with in INTERSTELLAR are the parts that Steven Spielberg would have effortlessly knocked out of the park.  Spielberg was once attached to direct this film, and I can see why, based on Jonathan Nolan’s script – there are such scenes of abject wonder that you know Spielberg would have made majestic on the big screen.  Christopher Nolan wants to deliver that same kind of wonder, but he undercuts himself.  Even at almost three hours, the film feels rushed, with Nolan speeding up when he should be slowing down, and dwelling on moments that should be filled with rich emotion, but instead hold the movie back.

Comparisons to Stanley Kubrick are numerous, but Nolan isn’t Kubrick.  He wants to have it both ways – he wants the clinical coldness of Kubrick’s work, yet he also feels the need to please the audience at the expense of the story he’s trying to tell.  Kubrick directed without compromise, and always crafted the story that he wanted to make.  Steven Spielberg always felt the need to connect with the audience, but he was also passionate and loyal to the story, and he is a master of being able to come to those emotional moments with a sincerity that feels true, and real.  Nolan wants to give INTERSTELLAR a deep, rich vein of humanity, but he’s simply not great at the sweeping sentimentality that Spielberg does so well.  He wants to be dispassionate when the movie needs to be, but you can feel the struggle in finding what works for the movie versus what he thinks the audiences wants to see.  In that respect, INTERSTELLAR feels like A.I., but instead of Spielberg emulating Kubrick, the film is Kubrick emulating Spielberg.  That’s not a statement of quality – it’s simply a statement that while both Kubrick and Spielberg can give us moments of power and majesty, they do so from very different places.  Nolan seems to be fighting with both.  Nolan may want it both ways, but he can’t connect the two in a satisfactory way.

But the moments that have real power are stunning.  The first excursion into space.  Traveling through the wormhole.  The thrill and the terror of seeing a gigantic black hole.  Exploring alien planets.  An ill-timed explosion.  The moment when INTERSTELLAR goes beyond the infinite.  Nolan tries to make it as real as possible, but these sequences are also beautiful and stirring in the way the best science fiction movies are – the ones that make us feel infinitesimally small in the vast universe.  When it comes to the vastness of space, very few movies give us that sense of primal awe; not very many since 2001, to be honest, and Nolan brings that power to the screen. I just wish he’d let us enjoy those moments more, but Nolan has to keep the movie moving, and we aren’t given much time to bask in them.

There’s also a conflict in INTERSTELLAR that bothered me the more I thought about it.  The movie is eager to celebrate science, until it isn’t.  In the film (and prevalent in reality today), the love of science isn’t practical.  The moon landings are considered propaganda instead of truth.  But whenever the movie could take a truly brave stance on science and our conflicts with it, it shies away.  The very real peril that Earth is under right now is pushed away for a more convenient fiction, and while the film takes pains to be scientifically accurate (as best it can for theoretical physics, anyway), INTERSTELLAR drops those ideas when they prove inconvenient.  This makes for inconsistent storytelling. Even in his films like the Batman movies, especially THE DARK KNIGHT RISES, Nolan plays with the passing of time onscreen in an abrupt manner, ignoring it completely when he is eager to get to the next setpiece.  In INTERSTELLAR, at least, he gets an out – time is fluid In INTERSTELLAR, where moments on an alien planet could be years on Earth.  Like in INCEPTION, Nolan explores these theories with pragmatic and grounded imagery, but at times it feels arbitrary.

Matthew McConaughey gives a performance that serves the audience well – he’s just “aw shucks” enough that we are willing to follow him into the depths of time and space, but he’s also intelligent and proud of it.  He makes the incredible believable, and INTERSTELLAR wouldn’t work without him.  The other performances are effective, especially Michael Caine, but often they suffer from the same problems the actors from STAR TREK: THE NEXT GENERATION do – spouting vast amounts of scientific exposition that may leave some audiences mystified.  The average person won’t understand the mechanics of Einstein’s Theory of Relativity, and the movie could have used those moments to slow down and explain it.  Christopher Nolan tries to show us the real-world application of these theories, but it’s erratic.  Nolan isn’t much for explanation, and because Nolan doesn't spend much time with the logistics, it may leave some audiences shaking their heads.  Like the Tesla effect in THE PRESTIGE, either you go with it or you don’t.

Jessica Chastain’s role is frustrating.  She’s an amazing actress, but she’s saddled with a part of the story that frankly isn’t nearly as interesting as McConaughey’s.  The strongest moments with Chastain’s character are when she is faced with a terrible truth, and how she deals with it works, but much of Chastain’s time is wasted on filler that could be better served with McConaughey’s crew.  I really enjoyed Anne Hathaway’s work as a scientist traveler, but at one key sequence she is given dialogue that makes little sense, coming from someone as intelligent as herself.  Again, it’s all part of Nolan’s weird tonal inconsistency, and it doesn’t work.  For an hour, an appearance by a certain character feels directly influenced by 2001’s HAL 9000 but it’s done in such an unwieldy manner that it lacks all subtlety and feels shoehorned in, as if Nolan needed a sense of conflict when there didn’t need to be any.

But it’s during the third act that INTERSTELLAR has the most problems, and this is directly a fault of the script as well as Christopher Nolan.  The war between Nolan’s sense of realism and Nolan’s need to give the audience an emotional catharsis escalates, and both the emotion and the sagacity of the piece suffers.  To Nolan’s credit, he tries to find appropriate and powerful imagery for the ideas that he wants to explore, but he can’t have it both ways.  Or rather, he’s not skilled enough to have it both ways and make it believable.  I almost feel as if I’m writing this review with an arm tied behind my back, because there are great ideas, themes, and moments in INTERSTELLAR that I want to write about but I can’t dive into with aplomb because of spoilers.  The first half of INTERSTELLAR moves at lightspeed, but the second half keeps stumbling over the speed bumps that Nolan keeps placing in front of himself.  INTERSTELLAR is a movie that you should see (and I may very well see it again), but you should see it for the spectacle and the experience.  But as a movie, it’s one of the most interesting failures I’ve seen in a long time.