Why is UNDER THE SKIN #4? Because this is the closest thing to a Kubrick film you’re going to get since the iconic director passed away. While I don’t want to do director/writer Jonathan Glazer a disservice by lobbing so many comparisons to Kubrick, visually, audibly, and tonally, UNDER THE SKIN is a stunning masterpiece of a film that may be too dark or slow for some, but for me, it hit all the right chords. Everyone hems and haws about Scarlett’s nudity in this film, but to do so is missing some gorgeous imagery and some sounds that are utterly alien. This is fantastically horrific cinema at its best. 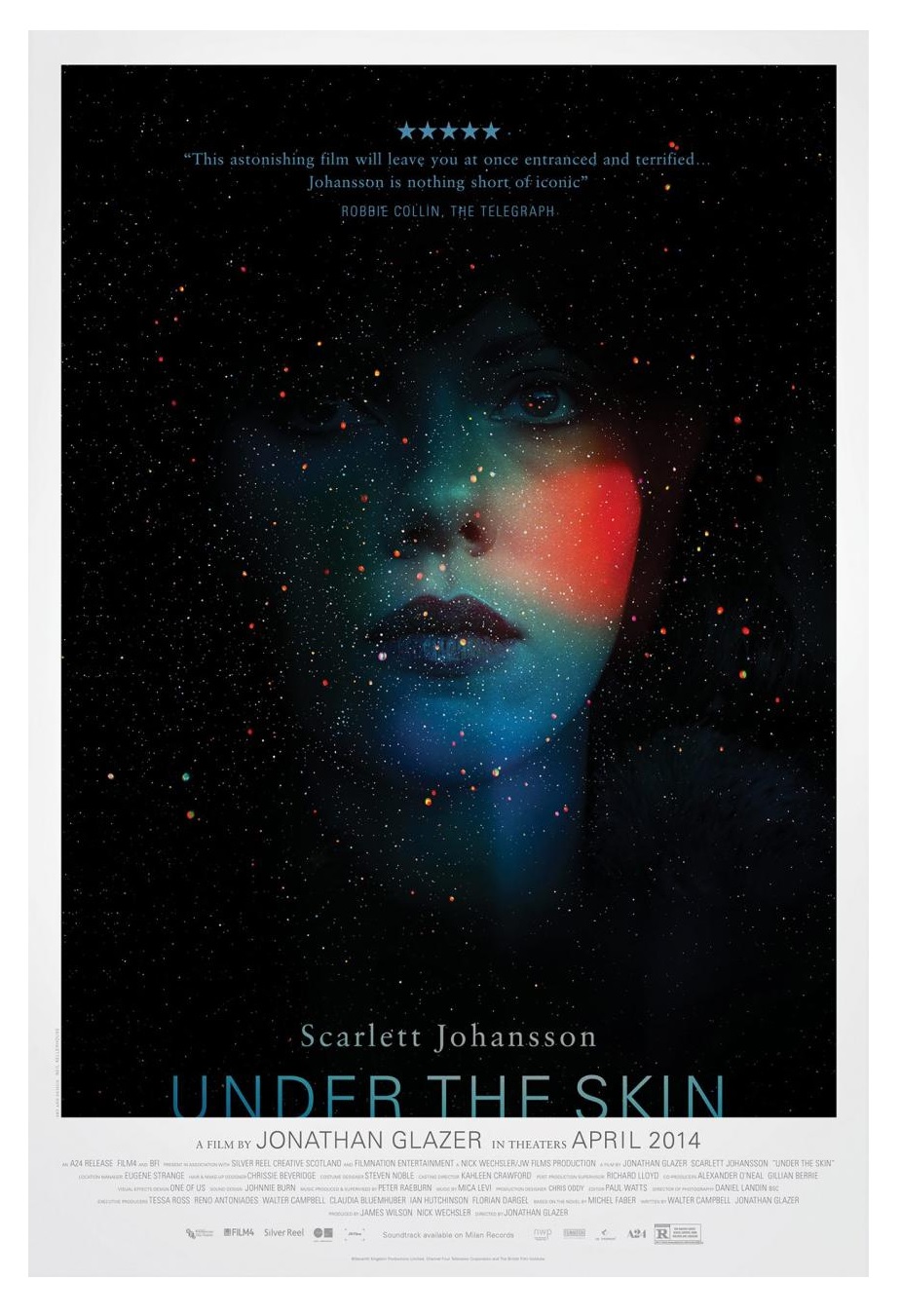 UNDER THE SKIN is an ambitious film unlike any I’ve seen in quite a while. The film is obtuse, open for interpretation, and utterly patient as far as storytelling, and while it is definitely a film I am glad I saw, I know it’s definitely not going to be a film for everyone.
<br< 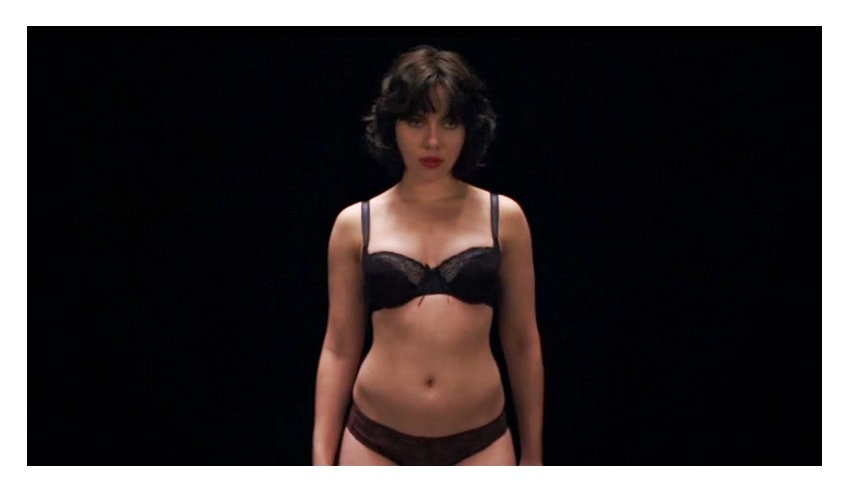 UNDER THE SKIN follows an alien that wears the skin of a human who assumes the form of another alien laying dead on the side of the road (both played by Scarlett Johansson). Aided by a mysterious biker who seems to be the alien’s guardian of sorts, the alien steals the clothing of a prostitute and then drives around Scottish countrysides and suburbs picking up random individuals and harvesting them for what looks to be their skins.

There’s more to UNDER THE SKIN. The film is actually quite nuanced, but for many, I think it’ll be hard for folks to stick with the film in order to see just what transpires. Moving at a snail’s pace, the alien picks up one person after the next, taking part in the same ritual over and over which entails the alien (Johansson) disrobing as she walks across a mirrored black floor. Behind her, follows her victim who, thinking he’s going to have him some sexy time, who disrobes as well one article of clothing at a time. What the victim doesn’t notice is that he is sinking into the floor and soon sinks completely into the mirrored surface and disappears. This scene is repeated numerous times through the movie, revealing a little more info about what’s going on every time it occurs. Still, even after we find out what happens to the victims under the surface, it’s still not completely clear. 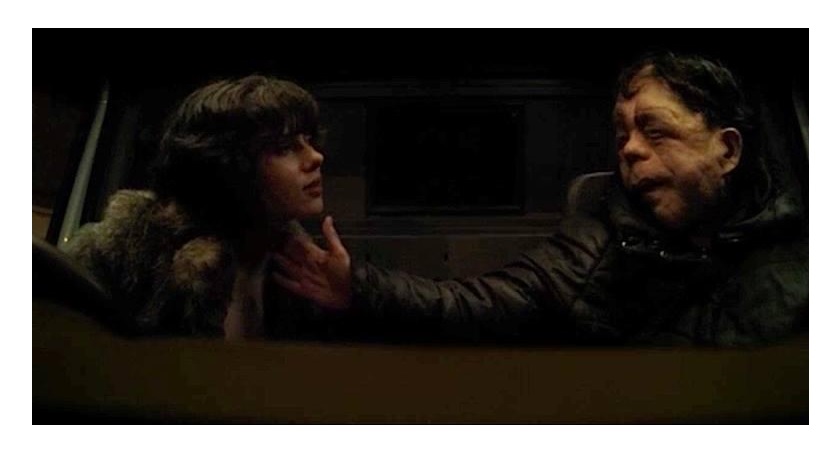 Now, I’m not someone who needs everything explained to me. The surreality of this ritual was engrossing for me. Sure it’s awesome to see Johansson disrobe over and over, but the reflective surfaces, mixed with the bizarre gravity of the situation and the hypnotizing music make it all feel as if I was witnessing some type of upside down dream through the eyes of something that doesn’t follow by the same rules of physics as I do. Director Jonathan Glazer who offered up his fair share of memorable imagery in SEXY BEAST, tops himself and then some with this visual smorgasbord. Glazer definitely channels his inner Kubrick as everything about the opening and these erotic death sequences feel as if they are the next evolution of the visuals seen in 2001: A SPACE ODDYSEY. From the long silences to the unnatural music used, the film feels as if it were some kind of long lost film Kubrick hid away and Glazer found.

Now storywise, I think the film comes up a bit lacking as it’s not until an hour in that we really see anything resembling a conflict in need of a resolution until Johansson starts feeling some kind of empathy for her victims. Those with little patience will definitely have tuned out by then. Johansson is amazing in the role, offering up an inscrutable façade for most of the film and shifting this look only slightly once she begins to realize what she is doing might be wrong when she picks up a man who is terribly deformed. Still, even when the emotions start to creep in, Johansson plays it pretty blank; emoting only in small ticks and quivers. Yes, there has been much said about her nakedness in this film and those scenes are bound to excite men and women alike, but her performance here is much more nuanced than sheer cheesecake and shows a talented actress under all of that sexy exterior. I was surprised at how much she says simply with her eyes alone as much of this film is following her silently pursuing her victims, while the other half is her running away from the chaos she has caused. 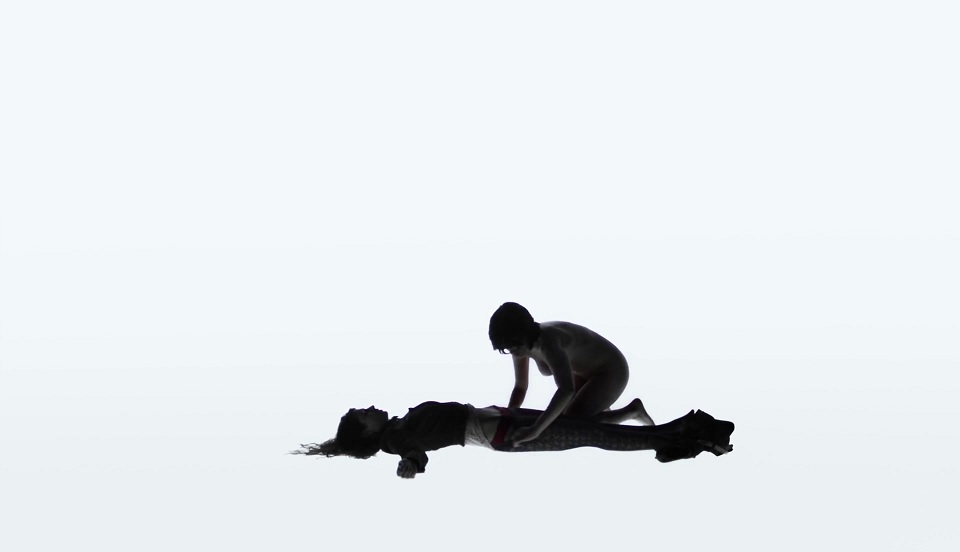 One thing that needs to be mentioned here is the music of the film by Mica Levi who makes everything feel unnatural and gives every scene its own theme song. The crude yet sexy music that showcases the grotesque way Johansson lures in her victims feels as if it were made by instruments made on another planet. Reminiscent of the soundtrack to THE SHINING, the off-kilter feeling I got while watching this film had a lot to do with the musical accompaniment. While I’m not one to notice soundtracks that often, Levi makes the music another character that lingers in the dark corners of every frame and tells us more about Johansson’s alien that she ever does in words.

The ending, when it does arrive at just shy of the two hour mark, is pretty intense. Again, as Glazer did throughout, it is filled with shots I had never experienced before. Again, it’s a quiet, yet utterly deafening barrage of imagery and sensations. It takes things to a logical place, though the rest of the film feels highly foreign to logic and resolves things in a tragic and awful manner. UNDER THE SKIN got a lot of press because of Johansson’s nudity, but that’s the least interesting part of the film. What really makes it work is the unique eye of Glazer and the bizarre story by Michel Faber. At times, it’s so grotesque you’re going to want to turn away, but the inundation of sights and sounds are going to grip those who allow themselves to be engulfed by the film. 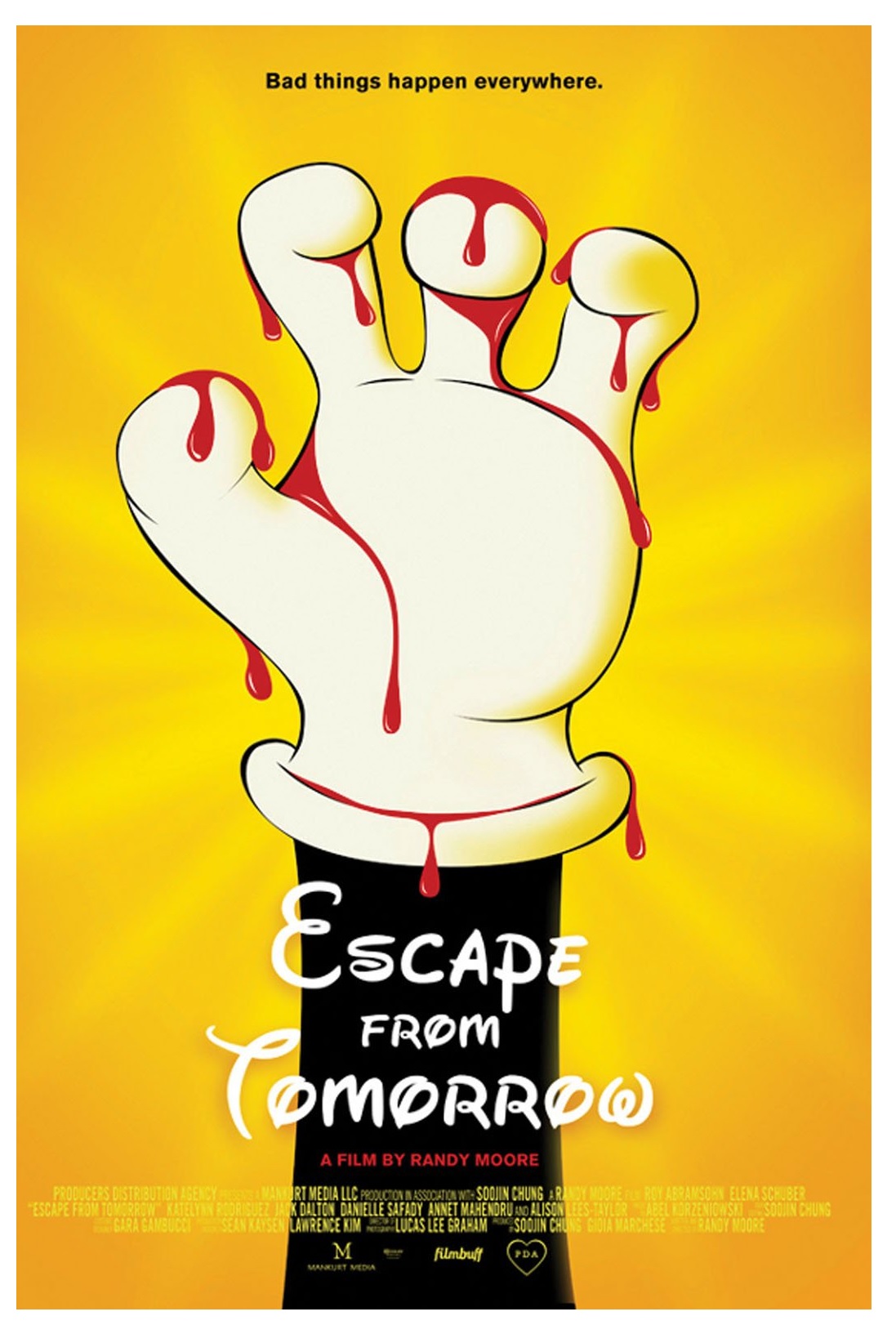 Worth Noting: ESCAPE FROM TOMORROW!

There’s a lot to love about ESCAPE FROM TOMORROW. It’s a bizarre trip down the rabbit hole and while I was prepared for twisted and warped images, I wasn’t prepared for the detailed and oftentimes horrific plot of the film which focuses on a man having a nervous breakdown. Sure this film takes the supposed happy imagery of Disneyland and flips it all on it’s head, but it also tells a deeply potent tale of what it’s like to realize you can never go home again and reliving this fantasyland through one’s children may not be the wholesome experience often thought of. This is well done and well dark stuff.