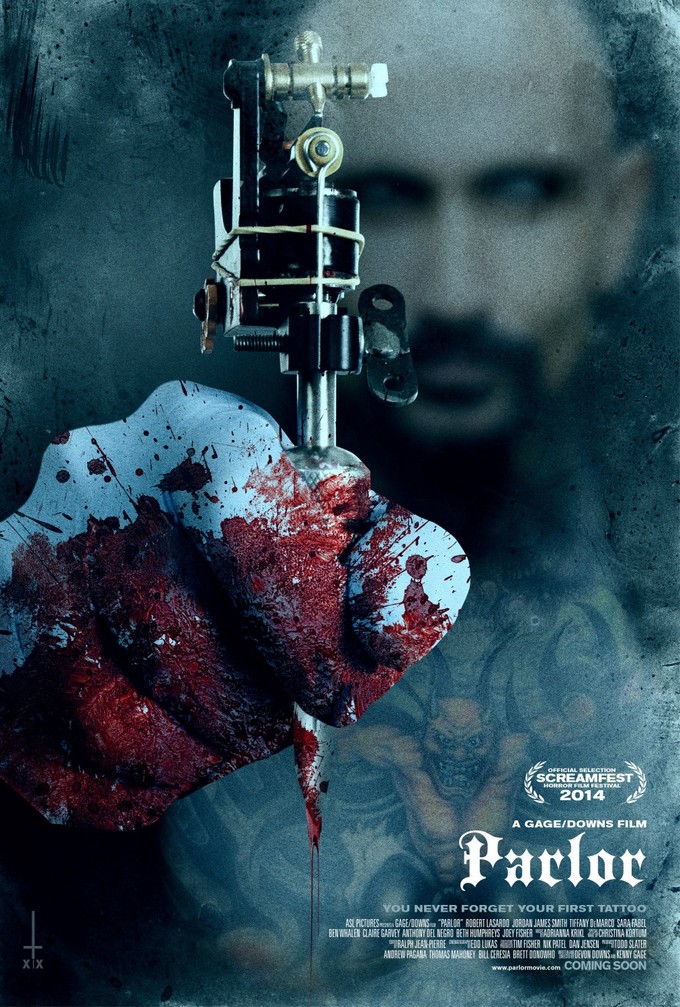 You know the story. A group of good-looking American kids are doing hedonistic shit on vacation, with sex, drugs, and general amorality flying in all directions. One (or some) of them crosses the wrong guy(s) or enters the wrong part of town, and all of a sudden, Jack and Jill Partygoer find themselves getting methodically hunted down by some crazy entity out for blood.

PARLOR isn't the first movie to follow this mold, and it certainly won't be the last.

Here, the co-eds are galavanting in the improbably tourist spot (but reasonable shooting location) of Lithuania. Amy has traveled with 5 of her friends, but while they seem to be face-deep in the booze-and-drug-fueled debauchery, she's debating what she wants to do with her life. So when the douchiest of the 6, Brock, scores with a hot slice of crazy that wants to take them back to the tattoo parlor she works at, she says, "Sure, why not?" and takes the plunge, thinking she'll have some cool ink to remind her of her trip, and possibly even her youth.

This is very much in the HOSTEL wheelhouse of giving the kids what we, the audience, secretly (or not so secretly) think they have coming to them. In HOSTEL, it was the two leads' grotesque thirst for sexy-time that led them right into the honeypot. Here, it's tattoo culture.

When we meet "The Artist" (played with a surprising mix of menace and warmth by Robert Lasardo), he goes on and on about how tattooing one's skin is an age-old art form, practiced by the Samurai and the Medievals before America even existed. He holds the practice to an even higher standard than calligraphy or sculpting, because the art of a tattoo is imprinted on a "living soul." But of course, our "heroes" don't want any sort of extensive, MANHUNTER/RED DRAGON-type ink plastered all over their torso; they're the type that get a little butterfly on the ankle or a cute saying on the shoulder and still act like they're extras from SONS OF ANARCHY. And this…doesn't jive with The Artist.

I won't get into what happens to Amy and her friends, only that it gets all sorts of icky, and directors Devon Downs and Kenny Gage don't shy away from any of the gory details. There's a bunch of really strong practical and digital VFX work courtesy of Christina Kortum and Stargate Studios, respectively), and it helps to do what a lot of indie horror fails miserably at, which is to straight-up gross you out. There are moments here that feel cribbed straight from MARTYRS, but without approaching that film's level of straight, uncut terror. The film does settle into that sort of "torture porn" aesthetic, where there's not really much suspense, just the progression of watching the young'ns get taken out (or worse) one by one. The set pieces themselves are fairly impressive in their bloodletting, and for Downs/Gage's relatively straight-faced portrayal of the gore. There's one nighttime chase scene involving some street thugs that may be worth the price of admission alone.

Lasardo and Sara Fabel (a real tattoo artist) as The Artist's assistant, Uta, both make strong impressions as the sinister tattoo aficionados. You'll probably recognize Lasardo from his appearances in OUT FOR JUSTICE, LEON, WATERWORLD, DEATH RACE, and a bunch others, but this is the first time I've seen him as a lead, and he centers the film with his soft-spoken gravitas and a calm intensity in his eyes. Fabel, in her theatrical debut, is magnetic from her first moment onscreen, with a daring haircut and a great, unrelenting aggression; don't be surprised if you see her face on the poster instead of Lasardo's, even if he is higher-billed.

However, the thing that separates the good slashers from the great ones is a roster of interesting victims, and that's one thing this flick unfortunately lacks. Brock is played by Ben Whalen as the outlier troublemaker of the bunch, a dude so shameless and grotesque that you're supposed to eagerly await his demise. The problem is, with his fist-pumping and open-faced perversity, he's the most interesting of the bunch, and the film loses a chunk of personality when he ends up going down the proverbial rabbit hole. Tiffany DeMarco, as Amy, certainly evokes a sort of youthful innocence, but her inexperience as an actress shines through with consistently amateurish line readings that kill the stone-faced dread of the better scenes. In general, the actors either lean into their archetypes (one character's true nature makes itself apparent really awkwardly and self-consciously) or simply fade into the background. Their dialogue, while aiming at a sort of relaxed realism, never seems believable, and their relationships are vaguely defined (I thought Amy was someone's younger sister, but now I'm not so sure).

Add to that an "ironic" ending that may be a little too cute and obvious for some, and you have a horror flick with just enough going for it to be worth your while. Robert Lasardo's Artist is a great centerpiece for the film to hang on, and there are moments of both gore and suspense that are clear evidence of Downs and Gage's talent behind the camera. But the tattoo-centric plot and the lame, oversexed dialogue of the teens give the film a sense of "bro-ness" that conflicts with the joys of its no-bullshit scares, and that's a shame, 'cause when they hit, they do tend to leave a mark.

For more information on SCREAMFEST or the films playing there through the 23rd, visit their official site.