Why is GRAND PIANO #17? Because while it is not a completely perfect film, it is one of the most Hitchcockian tension-filled roller coasters in film form you’ll see this year. Everything up to the ending, which does kind of fall apart, is so tight with tension you could bounce a quarter off of it. With MANIAC, OPEN WINDOWS (which was just released this month, so it won’t be on the countdown), the upcoming COOTIES, and this film, Elijah Wood is one of the best actors today appearing in some of the best suspense films you’re likely to find. With GRAND PIANO, Wood and director Eugenio Mira deliver one of the best thrillers of the year.

You can find GRAND PIANO on Amazon here and on Netflix here. Below is my review of GRAND PIANO from May! 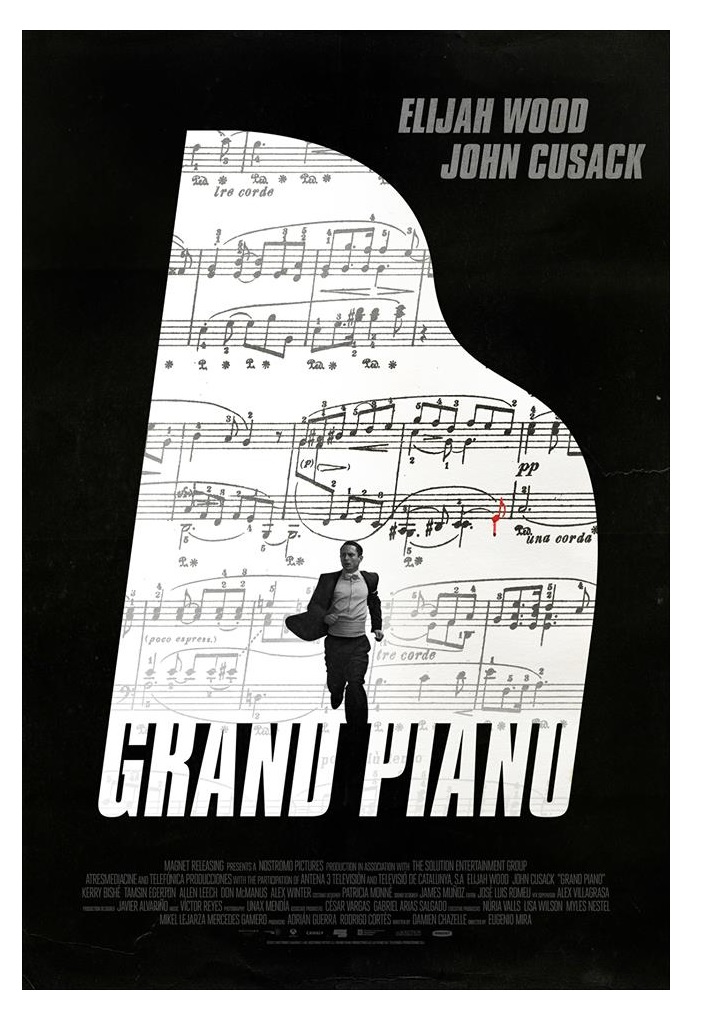 Putting the class back into horror this week is GRAND PIANO, a tense thriller that would make Hitchcock stand up and cheer.

Elijah Wood (who is quickly becoming one of my favorite actors given his performance here and in MANIAC last year) plays Tom Selznick, a concert pianist and former protégé to a master pianist who recently died and while living wrote a concerto that was deemed unplayable. Suffering from stage fright years prior, Selznick returns to a stage in a performance put together by his movie star wife Emma (ARGO’s Kerry Bishé) as a means to get him back on his feet and out of his shell. But as Selznick takes the stage in front of an audience filled with anticipation, he notices on the music sheet a note that says if he misses one note in his performance tonight, he is going to die. Through a series of logical yet methodical events, Selznick must fight for his life doing what he does best which is playing the piano.

This is another film that, if in the wrong hands, would be utterly ridiculous. But in the hands of director Eugenio Mira, who himself is a composer, it is about as perfect a white-knuckle thriller as you’re going to get. Mira not only makes this film a spotlight for the music, but he also uses his camera to swoop and loom around the stage and across the crowd as if you are riding the musical notes themselves. What could be a boring film with a fixed camera on a guy playing piano for an hour and a half is instead a rollercoaster ride of exhilarating sound, swirling in and out of an anxiety-riddled pianist’s psyche being pushed to its limits. This movie is filled with so many things to please lovers of all things film—everything from ever-crescendoing pacing, to rapid fire editing, to jaw-dropping scene to scene transitions (there’s one in particular where a man is slicing across a woman’s throat with a shard of glass which immediately cuts to a bow running across the strings of a cello that took my breath away).

Of course through the gigantic and emotive eyes of Elijah Wood, one can’t help but be enveloped by the waves of anxiety he conveys with his performance. Wood’s performance is utterly convincing as the anxious performer fearing another bout with stage fright. And while I can’t be sure, it seems like he was actually playing piano in many of the scenes.

It’s also worth mentioning that Bill S. Preston Esquire himself, Alex Winter, returns to the big screen here in a minor yet crucial and utterly chilling role. Having not seen Winter in quite a while, his age only makes him look all the more unique, and here’s hoping this means we’ll be seeing more of him in future films as he offers up an unconventional, yet solid performance here.

If there’s one criticism I had for GRAND PIANO, it’s that things get a bit over the top in the last fifteen minutes. I love films like Michael Mann’s COLLATERAL, which highlight the claustrophobia by trapping a person or two people in a tight and tense situation. But when Tom Cruise and Jamie Fox left the cab in that film, everything that made it awesome trickled away. While the transition is not as jarring here with GRAND PIANO, when John Cusack finally shows his face and he has his final confrontation with Wood above the stage, I found myself longing for more moments of sheer tension that occurred in the first hour with Wood playing the piano. Sure there needed to be a resolution, but this ending goes way over the top and almost took me out of the film.

Still, for the granite-solid first hour of edge-of-your-seat awesome, GRAND PIANO is a film lovers of nail-biting cinema will need a couple extra hands for. 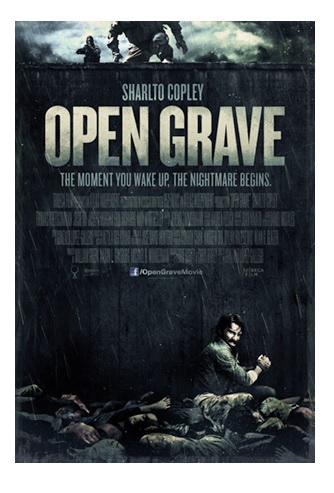 While this is a much grungier type of thriller than GRAND PIANO, OPEN GRAVE is filled with suspense and terror from beginning to end. Sharlto Copley delivers a fantastic performance as a man who wakes up in a pit of bodies without a clue as to who he is or why he is there. What unfolds is pretty bizarre, but it’s the scenario of waking up not knowing who you are that is what is most effective here.