Why is THANATOMORPHOSE #27? Because it’s the best practical gross-out effects you’re going to see. There are parts to this film where you will swear the effects are real as it shows from beginning to the very end as a woman contracts some kind of disease that eats away at her body. While CONTRACTED focused on this same subject, it placed the blame on venereal diseases and sexual encounters. THANATOMORPHOSE is deeper and more metaphysical about all of that suggesting that there is a loneliness and rottenness in the lead’s soul that is causing this deterioration. Deep and gross, THANATOMORPHOSE will definitely test your gag reflex. 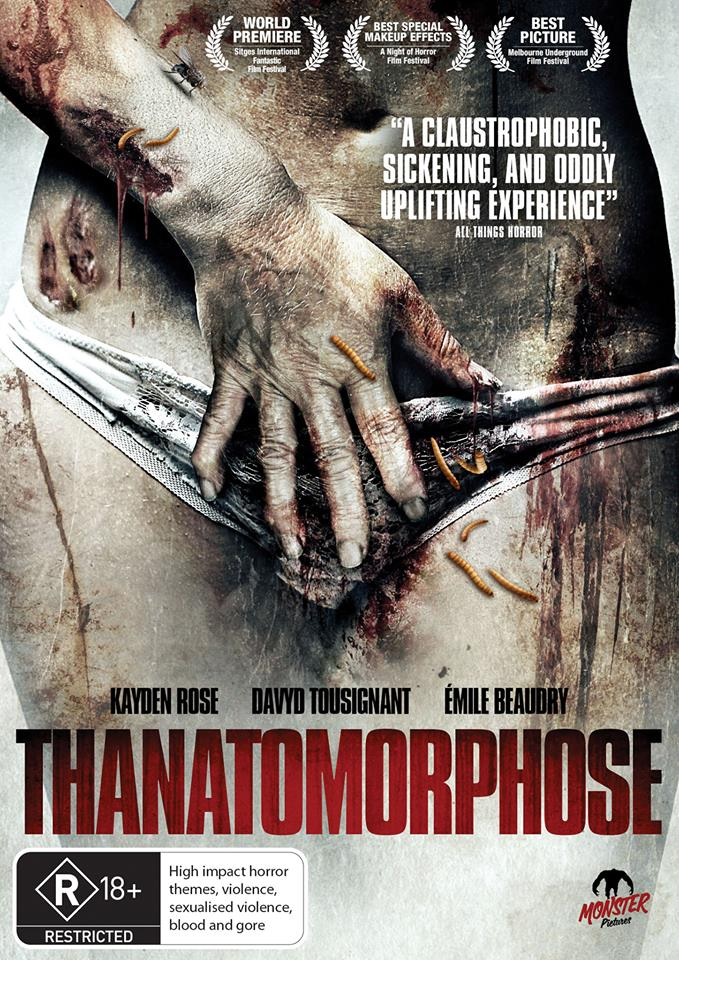 Available on DVD from MVD Entertainment! 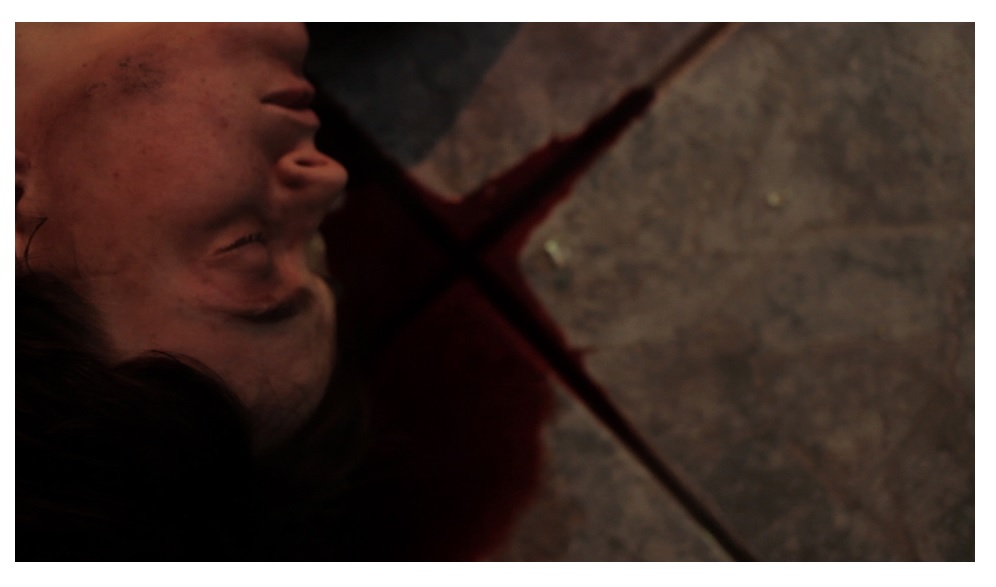 This is not a film for the squeamish. I repeat, this time with feeling: this is not a film for the squeamish! THANATOMORPHOSE, which I believe roughly translates into “becoming death”, is a film unlike any I’ve seen. In many ways, it’s a triumph—in practical special effects, in simplistic storytelling, in metaphorical storytelling, and in the depths and levels of tragedy it falls into and rots in. The story follows a young struggling artist (Kayden Rose) who is in a relationship with a brutish boyfriend that is going nowhere and is obviously extremely unhappy with her life. The film opens with a montage of oversaturated imagery which only after a while I was able to piece together as a surreal sex scene. Soon after, the young woman (Rose) sees a bizarre bruise on her arm, but thinks nothing of it. Thus begins a literal decomposition of the poor young thing and it plays out minute by meltingly painstaking minute.

There are people who will absolutely loathe this film for the depths to which it goes. Falardeau pulls no punches here and gives no shit as far as what he will show and won’t show. Vomit, blood, guts, gore, piss, shit, pus, bile—there isn’t a body fluid that isn’t addressed on screen in the most vile of manners as the woman decomposes in front of our very eyes over the hour and forty minutes of this film. For many, the simplicity and gratuity of the story is going to be an utter turn-off because, basically, that’s really all there is to this film—one woman completely disintegrating mind, body (especially body) and soul before our eyes. For some it’s just going to be too much, and while I respect the opinion of those folks, I can’t help but wholeheartedly disagree. 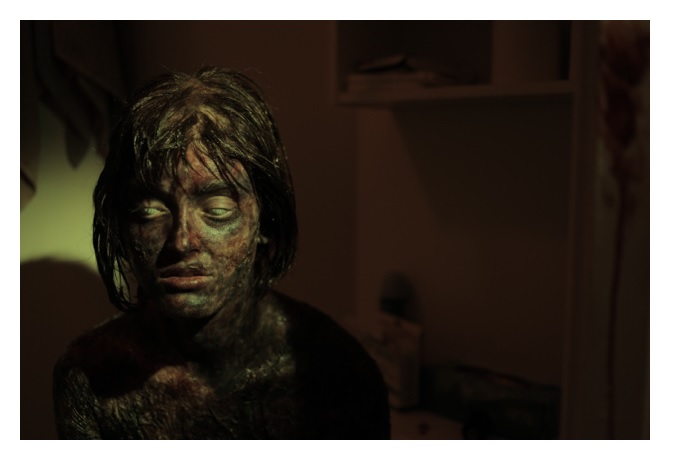 What Falardeau has given us here can be seen as metaphor for the struggle any young woman goes through when trying to find herself and her way in life. The scope could be broadened a bit to be a comment on the death of art, since the main character is an artist who, even as she is falling apart, still tries to create. The view could even be expanded to evoke some kind of commentary about the inevitability of death for all of us. Whatever the metaphor at work here, this is my kind of film. Sure it’s artsy, but it’s definitely not insubstantial. My heart ached watching this poor woman try her best to literally keep herself together with thread, gauze, and duct tape as her world and body falls apart around her. A lot of that has to do with Kayden Rose’s courageous performance, as she is nude and exposed for 95% of this film (aside from all of the decomposition makeup, that is). The palpable torment she goes through in this film will leave your soul stinging.

From a practical effects point of view, I haven’t seen anything like this. In an age when CG shatters all semblance of reality in most films, modern horror makers should take note to see how tactile and effective practical effects can be. The makeup isn’t bulky or cheap. Rose is covered in slime and ooze, and her flesh actually falls off the bone by the latter portions of the film. There are effects in this film I have no idea how they pulled off, but somehow they do it and it feels all the more nauseatingly effective that they were done in the scene rather than added later with CG.

THANATOMORPHOSE is definitely not a film for everyone. If you have a strong stomach, an appreciation for the more artsy films, and can steel your soul in preparation for watching, you just might be ready for this film. I’ve warned the rest of you. This is a vile and disgusting film sure to cause feelings of unease, loathing, and utter urp-itude. It’s also one of the most tragically beautiful films I’ve seen in terms of effects, simplicity, and sheer guts on director Falargeau and actress Rose’s part. This is a film I most definitely will not forget. 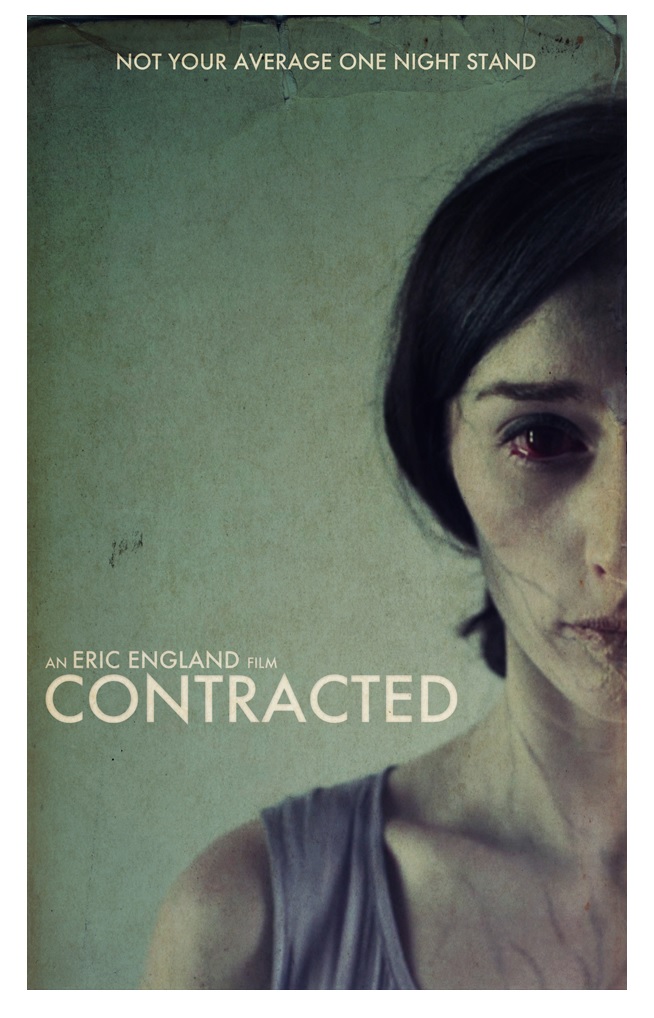 CONTRACTED is basically the same sort of story as THANATOMORPHOSE, about a woman who contracts a venereal disease that ends up turning her into a zombie after she has a one night stand with a man who has sex with a corpse in a morgue (that man played by THE GUEST and YOU’RE NEXT writer Simon Barrett). The film takes some bold turns and is definitely not one I would call a fun horror experience, but it is successful in making you feel creepy and uneased as all get out.