Logo by Kristian Horn
What the &#$% is ZOMBIES & SHARKS?
Greetings, all. Ambush Bug here. Happy Birthday to AICN HORROR which celebrates its fifth year in October! Always hoping to pass on new and exciting films for all of you ravenous readers, I have once again compiled a list counting down to my favorite horror film released since last October and covered in this here AICN HORROR: ZOMBIES & SHARKS column. Some of these films might be new to you since there isn’t a lot of horror in theaters these days that aren’t toothless remakes or watered down sequels. Theaters just doesn’t seem to be the place where the horror is at these days, I’m sad to say. Some of these films have only seen the light of day on Video On Demand or simply go straight to DVD/BluRay or digital download.

Why is DISCOPATH #31? I chose DISCOPATH to start out this list because it’s a throwback slasher with a silly motif, but dammit if it isn’t a fun little film. The chase scene at the end set to disco music had me roaring with laughter and the whole thing is goofy, gory fun. You can find it here on iTunes and here on Amazon. Here’s my review of DISCOPATH from June! 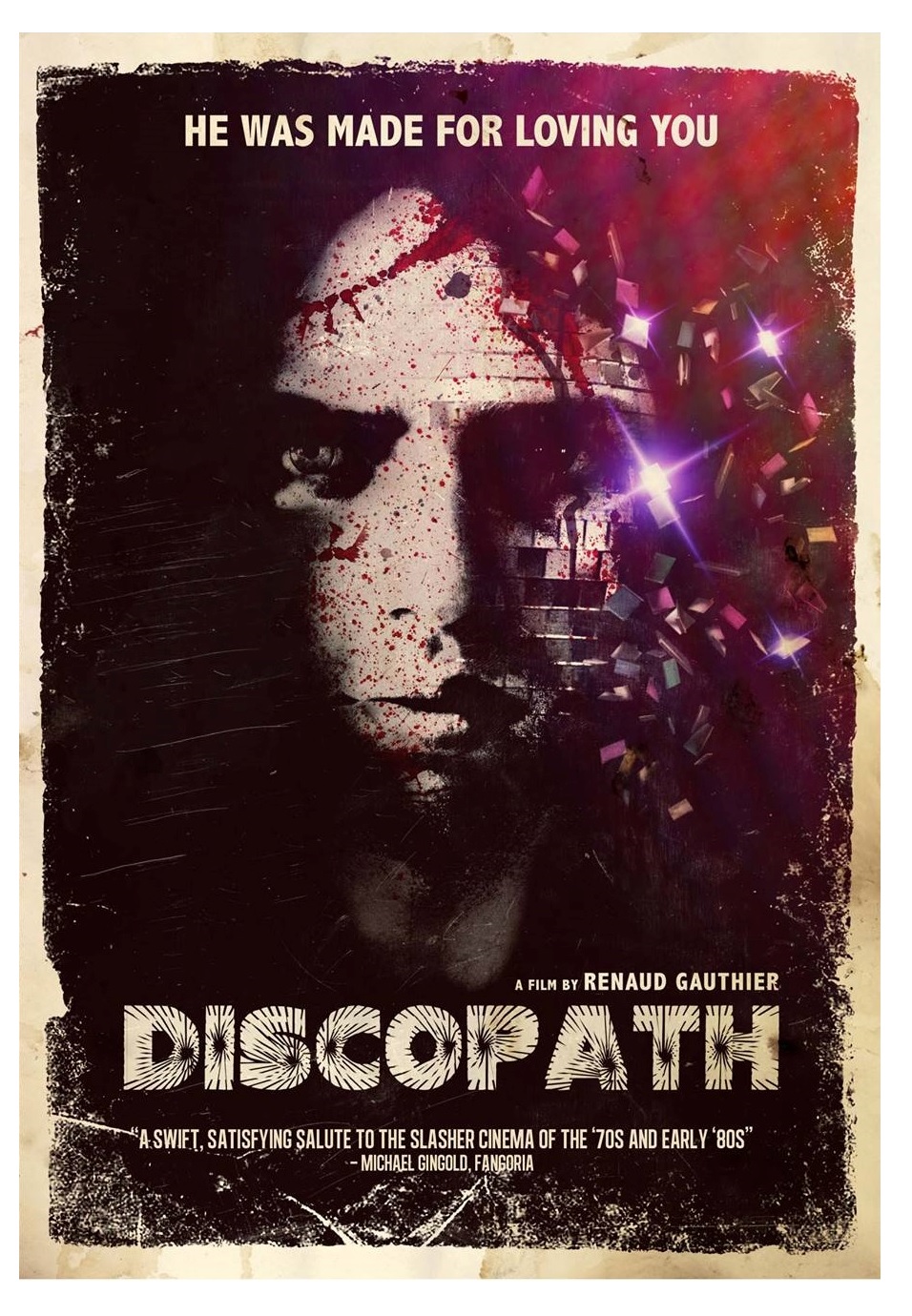 Holy cow, I loved this film!

Set in 1976, DISCOPATH opens with an homage to the New York we have grown accustomed to from films like SATURDAY NIGHT FEVER and Scorcese’s films of that era, with a Brooklyn boy working in a pizza shop being distracted by a gaggle of kids who walk in with disco music playing on their radio. When he is fired for lazing on the job, he skips over to the local roller park and meets a sweet gal. The film feels like it’s going to be one of those quirky slice of lifers set in a specific era, but soon derails into one of the most entertaining serial killer films I’ve seen in ages.

Much like SILENT NIGHT, DEADLY NIGHT, where the lead character is sent off the deep end when events in the present cause deep-seated psychosis to erupt in the present day, DISCOPATH substitutes Santa with disco music with similar results. While the reasons for the deranged killer’s derangement are revealed midway in the film, it’s pretty evident early on that Duane Lewis (Jérémie Earp-Lavergne) is pretty nuts from minute one, and the level of goofy serial killer mayhem reaches comically monumental levels by the film’s end. 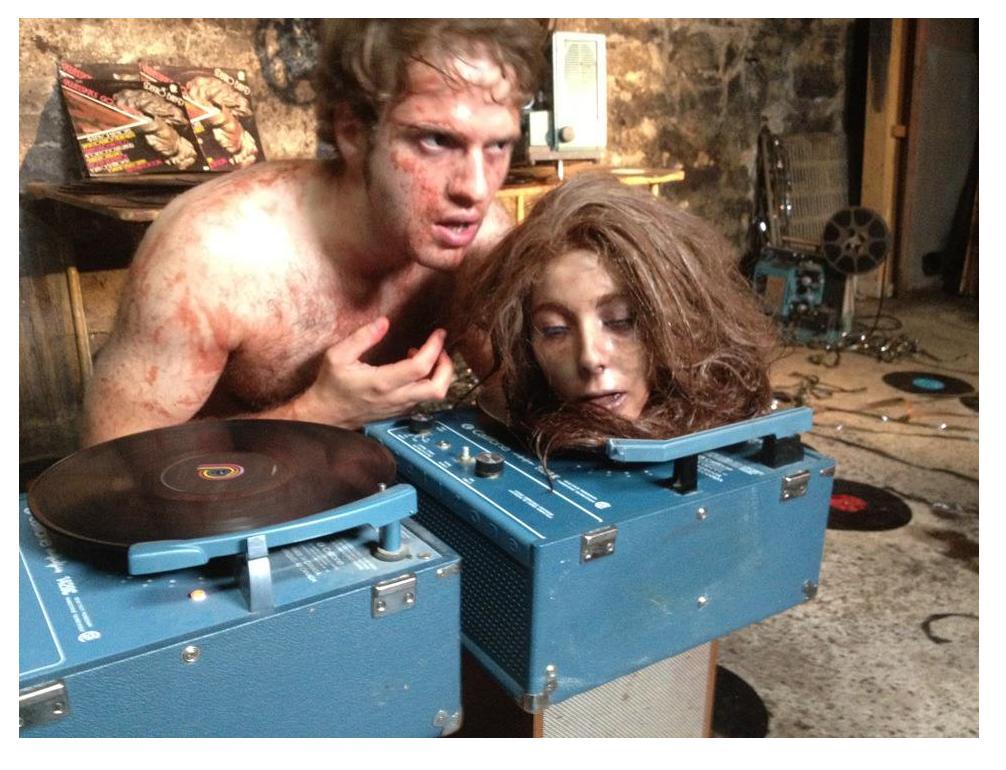 Jérémie Earp-Lavergne looks like a slightly less wooden Hayden Christensen and has a lot of his mannerisms, which actually adds to the creepy quality the character exudes. His reactions to the disco beats are sometimes comical (such as donning a nun’s costume in order to hide out) and sometimes unbelievably disturbing, as he is shown later in the film dancing in his secret lair nude and covered in blood with two severed heads. There’s also a subtle and creepy effect used here as Lewis’ eyes become completely dilated, causing his eyes to look completely black in times of his super serial killer rampages.

DISCOPATH feels like a true throwback to the 80s when horror was simpler and all it took was some childhood trauma to push a guy to kill. The unconventional narrative switches gears midway as Lewis flees to Canada after his first spree and the time jumps four years to 1980, when Lewis is pushed over the edge again. As if the locale and time shifts weren’t jarring enough, the film all of a sudden is subtitled in French for the latter half of the film. But while I might fault some films for this shift in tone, locale, and even era, it adds to the charm DISCOPATH exudes like a thickly layered cologne on a crowded dance floor.

What I love about this film is the reckless abandon that occurs in terms of gore. It isn’t enough that Lewis stabs a woman in the wrist with a knife. He later rips the hand clean off. A beheading is too boring in and of itself; it’s better to desecrate the bodies and shove multiple records into the torsos. And the scene where Lewis rams a hearse and the dead body topples out of it is going to put you through the roof. It did so for me, especially when the slo mo shot makes sure to highlight some mysterious blood coming from the corpse’s crotch…

This film with satisfy retro-freaks and gore hounds, and pretty much anyone who loves the over the top takes on slashers that went on in the Eighties. Rhyme and reason is thrown out as this simple-minded serial killer goes on a simple-minded rampage with genius results. Those of you who wish they could go back in time and destroy the disco era now have a film to idolize. Set to all sorts of painfully awesome disco music (especially an inspired use of the song “I Was Made For Loving You, Baby”), DISCOPATH is fun from kooky start to its absolutely batshit finish. 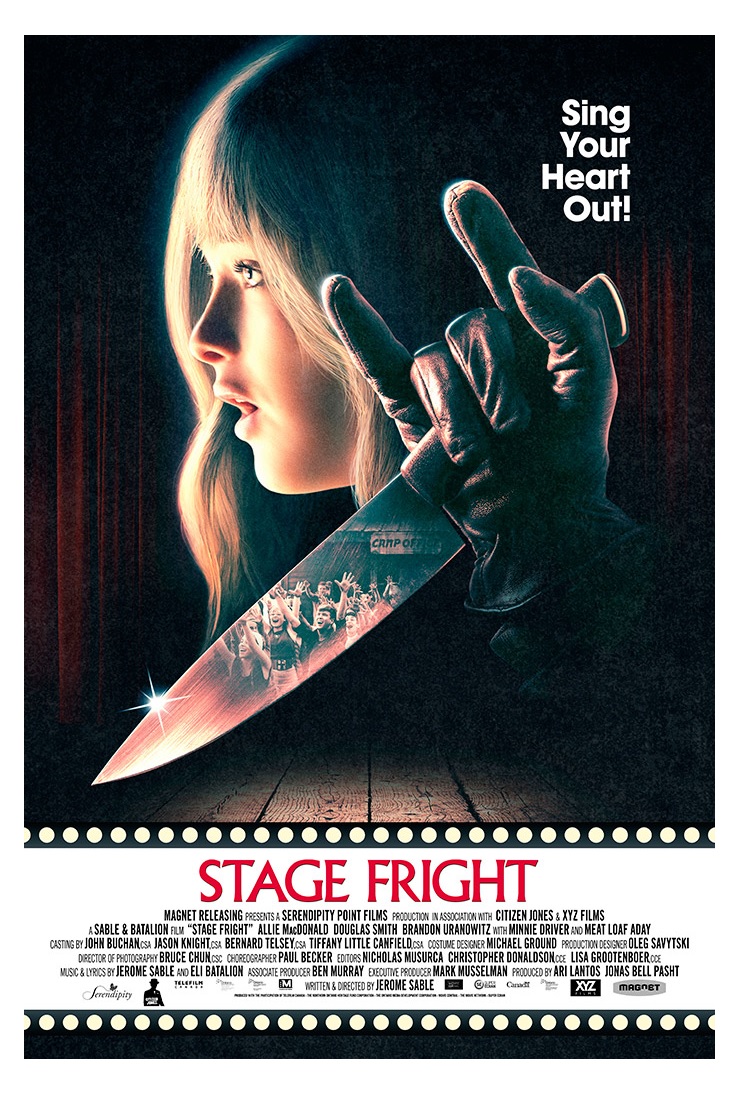 Another little slasher worth seeing out is the horror musical STAGE FRIGHT which basically is GLEE meets THE PHANTOM OF THE OPERA. With a fun cast and some admittedly catchy songs, this film mixes music and gore like few I’ve seen. Reminiscent of THE PHANTOM OF THE PARADISE, this is a modern retelling of an age old story, but still it delivers in entertainment.