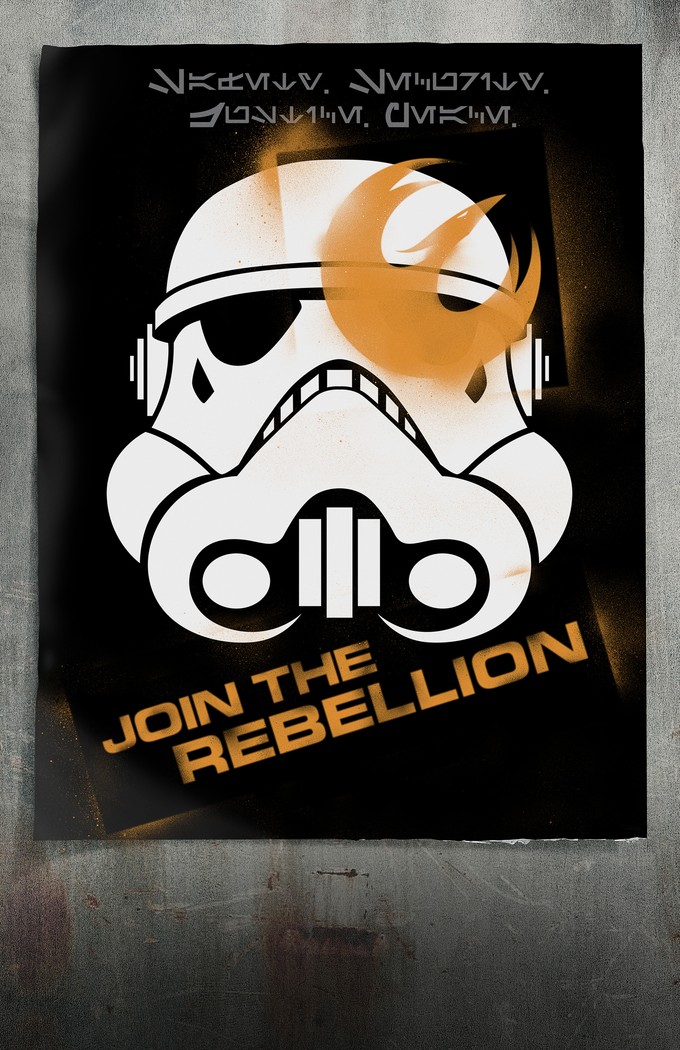 So here we are - the debut of STAR WARS REBELS, set between movies III and IV,  is upon us.  Our first sense of Disney’s approach to the STAR WARS universe, inexorably propelling us towards the theatrical release of J.J. Abrams’ much-anticipated STAR WARS EPISODE VII December 2015.

Rumors abound that REBELS will somehow connect or ‘set up’ elements of EPISODE VII.  Having seen REBELS’ inaugural episodes, nothing in particular jumps out at me in regards to this being a probability (admittedly, the show is young) - although I will say that it wouldn’t surprise me if this series somehow impacts E7 for two primary reasons: 1) word on the street says Abrams is all about cross-platform synergy and trans-media connectivity.  Thus, REBELS feeding into his movie doesn’t seem too far a stretch all things considered.  And, 2) The REBELS universe is hugely detailed and very much STAR WARS, despite it’s youth-targeted promotional strategy (more on this in a moment).  That REBELS, which is canon, might influence other STAR WARS in any number of regards would not be unreasonable in any way.

About that ‘youth targeted’ marketing.  This approach is hardly surprising given the show’s placement on Disney XD. However, I’m not sure that the footage selected to promote the REBELS across the past few month has done the fledging series a great deal of service, or justice.  The punky ‘attitude’ evident in early clips - which has put many fans on-edge and raised a few dubious eyebrows - all but dissipates roughly half way through the 40-something minute opening installment, replaced by the kind of inter-personal dysfunction and snarky one-liners for which the ‘classic’ STAR WARS trilogy is so well known.  REBELS stops feeling crass, and starts feeling very agreeably familiar.

Many of STAR WARS’ most time-tested themes are represented here, both literally and musically.  The notion of father/son/master/apprentice is very, very much at play once more (I wonder if we’ll ever have a STAR WARS without it?)  - this time between aloof, Han Solo-ish Kanan (Freddie Prinze, Jr.)  and young orphan Ezra (voiced by Taylor Gray).  The nature of this particular relationship unfolds very differently from any we’ve seen before in the STAR WARS TV or film universe - there’s a discomfort and awkwardness to the communion here; two characters reaching out for one another, yet utterly uncertain how to actually connect.  And seemingly uncomfortable about what it means to actually do so.  Moments like these very much sell the series, and ground REBELS’ adventures in a touching, ’sometimes it’s awkward to be alive’ reality to which both younger and more mature viewers may very well relate. 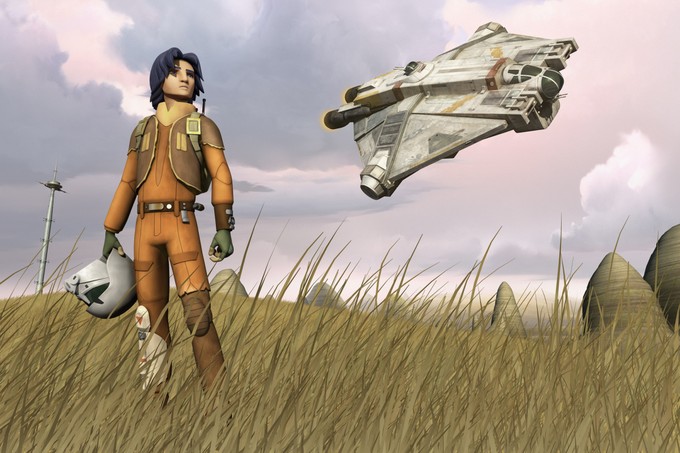 Little-to-no reference is made to the events of THE CLONE WARS - they are briefly mentioned, as is the Jedi purge, as is the notion that not many Jedi exist anymore.  Beyond this, REBELS remains firmly grounded in its post-EPISODE III universe, referencing Grand Moff  Tarkin, the relocate band starvation of indigenous populaces under Imperial rule, and strongly setting up the ‘rebellion’ motif to which the series’ title refers.  This is handled in an interesting fashion:  when lead Ezra first meets our titular band of misfits, they don’t consider themselves ‘Rebels,’  or much of anything for that matter.  They’re just trying to get by in a besieged galaxy, while doing the right thing whenever opportunities arise.  Imperial goons, however, call them “rebels” from the outset.  A meaningful turn as we know what this nomenclature will ultimately mean to both the SW storyline on the whole, and the immediate universe our heroes inhabit - even if our characters don’t at the moment.

While REBELS opens with agreeable speed and spunky set pieces befitting the best of vintage STAR WARS, the pace, personality, and rhythm of the show initially feels ‘off’ and almost desperate - as if it’s TRYING to cop a ‘tude, or make a point, instead of keeping its eyes on the prize.  It is from these opening movements which many of the aforementioned promo clips we’ve seen are drawn.  This is an unfortunate development in terms of shaping the expectations of potential audiences, because, as mentioned above, the show changes and shifts considerably as it unfolds.  It becomes much more sincere, much more sure footed, and much more devoted to its own internal universe.  It stops trying to be cute, stops trying to convince, and focuses on telling its story.  And when this happens, it soars. 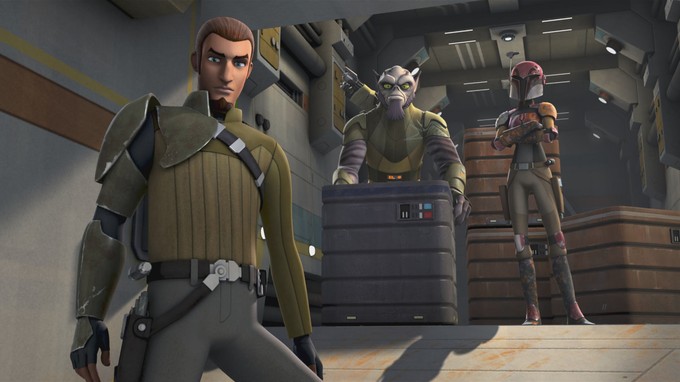 Action sequences are generally solid, with a few ‘wow’ moments which are certain to become iconic.  Look for a blaster fight/race to the finish in a setting unlike any we’ve ever seen in SW before (unless I’m forgetting something),  and the much-publicized Inquisitor (voiced by Jason Isaacs) is a worthy uber villain who moves with a body language which is intense and daunting, even when conveyed by the series’ sometimes minimalist animation.

By the final moments of Spark of Rebellion, the introductory episode, REBELS finds its ‘heart’ and ‘truth.’  Despite its funky, sometimes off-putting opening moments, it clears the air and firmly asserts its right to stand stall in the STAR WARS universe.  We understand its characters, to a degree at least, and grasp what drives them.  We accept that their fitting into SW history makes a great deal of sense on a number of levels.  The fourth episode (I didn't see the second or third), Rise of the Old Masters, illustrates our heroes working very much as a team, sometimes in impressive and amazing manners.  It’s here we get the sense of not only the innate badassness of the personalities on screen, but the awesome potential of the show itself.  I’d even profess that this fourth episode of the series my be our first, true glimpse of ‘classic’ STAR WARS presented with contemporary style and sensibilities might feel like (although, I say this not knowing what the second and third episodes in the show are like yet).  It’s pretty energized, and rather cool.  Look for voice work by STAR TREK: THE NEXT GENERATION’s Brent Spiner in this installment, by the way.  He’s ‘Gall Trayvis.’

There’s a paradox at play in REBELS:  it’s clearly a whopping and affectionate homage to the classic SW trilogy, yet much of what works about the show can be directly traced back to the stories and tone it is  setting up.   When viewed chronologically, REBELS not only sets the stage for the naturalistic  ‘little man vs the Empire’ conflict we see in Episode IV, V, VI - it portends the artistic and tonal stage was well.

Character banter, the likes of which features so prominently in movie Eps 4,5,and 6, is in abundant supply, here  - as are the classic trilogy’s occasional flashes of mean-spiritedness (one gag involving a Stormtrooper head stands out).  Many of John Williams’ musical motifs are evident and well utilized, although some assume a strangely different meaning when considering their placement within SW continuity as a whole.  For example, Williams’ lovely ‘Leia’s Theme’…

… exists here as more of a reunion tune as opposed to a character theme.  A choice which is not necessarily ‘wrong’ - it’s just not what’ we might expect.  Feature film-references settings like Kessel play a major part here, and the Empire’s enslavement of Wookies (which I believe may be SW’s Extended Universe…or whatever it’s called now…affectation) is also hugely relevant.  Characters and phrases which are repeated again in Episodes IV, V, and VI are mainstays here - some fun is even had with them  from time to time.  REBELS is very much trying to create something new and fresh, but it is extremely reverent - and hugely well versed - in STAR WARS mythos to date.  REBELS is very much STAR WARS, and is often rather good STAR WARS.  The last shot of the fourth episode - fusing classic STAR WARS iconography with unexpected, timeless Americana (this description will make complete sense when you see it) is truly inspired and utterly unexpected.  To paraphrase my father upon seeing the opening shot of EPISODE IV in 70mm back in 1977, “if they can do that, they can do anything.”  And REBELS just might.

Given STAR WARS’ return to the big screen under new stewardship and its migration to Disney on the whole, there’s a lot of concern about who, exactly, REBELS is meant for at this point.  Is it for kids?  Is it for fans?  Can adults deal with it?  The answer is - yes to all.  REBELS, in many ways, feels like DOCTOR WHO - a show allegedly intended for kids, but easily embraceable by adults, and containing a few themes which will likely go far above childrens' heads.  It’s a fun and heartfelt extension of a universe many of us cherished - broadened in a manner which feels logical, natural, and intriguing in itself.  As with THE CLONE WARS before it, REBELS’ animation style - minimalist and highly stylized -  may be off-putting to some.  But there’s a lot of substance driving this tale if one can look past its sometimes visually sparse surface, and more innate heart is evident here than in the whole of Prequel Trilogy.  This isn’t to say REBELS is sappy  - just that it thrives on a human equation and emotions which were not always deftly conveyed in EPISODES I, II, and III.

By way of objective analysis, I showed my seven year old son REBELS to see if he’d like it.  His appreciating the show was in no way a given:  he’s quite interested in STAR WARS LEGOs, plays with a few of the Hasbro ships I’ve left lying around, knows enough about SW to get by in a casual conversation - but he’s never gotten into STAR WARS in the way I’d hoped he would.  In the way I have.

By the end of our screeners, he wanted more episodes - but I had none to offer him.  Determined, he followed me into my office, sat on the floor with crossed legs, and asked me to tell him about how the Empire came about.  I told him I’d show him - he said he wanted to know ‘now.’  I put down my mouse, spun in my chair, and for the first time ever regaled him with stories of an ancient evils and the brave knights who fought back their darkness.  Of Republics gone bad, and dastardly Empires which were worse.  I told him of heroes, and villains, and aliens from a thousand worlds.  I told him of sprawling armies of Clones, and the legions of weaponzied robots they resisted.  I told him of hatred so vast that a planet-killer was created to seed fear, spread power, and destroy millions.  I told him of tiny little ships and their brave pilots - who flew desperately into the breach to save the day for freedom, or die trying.  His eyes lit up.  More questions came.  And REBELS LEGOS moved to the top of his Christmas list in a brief, defining, glorious moment.

Welcome to STAR WARS, son.  And thank you, REBELS…