Ahoy, squirts! Quint here. I'm starting to get behind, so that means I'm gonna double up on a review or two to catch up. The first two titles to jump out at me as good to pair up were Keanu Reeves' action/revenge film JOHN WICK and Joe Lynch's EVERLY, a shoot-em-up starring a really pissed off Salma Hayek. Both movies have guns, assassins, title characters, murdered dogs and... uh... more guns.

Both of these films exist on a similar plane. John Wick is the bigger budgeted, wider-in-scope star vehicle that takes itself seriously while also turning the revenge genre on its head with a wink and a smile and Everly is a more exploitationy low budget star vehicle that just wants you to have a good time. Let's start with Mr. Wick. 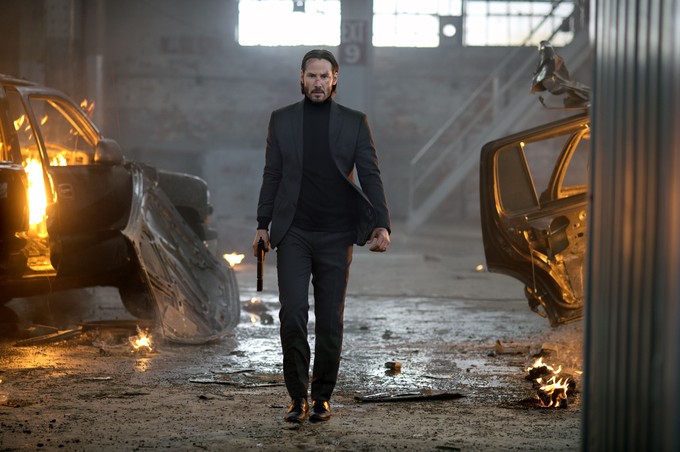 John Wick won a lot of hearts at the fest this year including my own. Reeves' pet project The Man of Tai Chi was intentionally cheesy chopsocky action, but this one is more of a real deal straight forward action revenge flick. It doesn't re-invent the wheel with the plot, but what it does do is paint a vivid and fun crime world.

I'm sure you've seen the trailer and that's indeed the movie. Keanu's wife dies and her last gift to him is a little beagle puppy. A douchebag thug (played by Game of Thrones' Alfie Allen) and his boys kill this dog without being aware that Reeves is one of the greatest living hitmen.

This isn't a tale of a guy trying to get out of the business because he found love. That happened in another movie we didn't see because it would be boring. John Wick was too badass to be stopped from leaving the crime family.

So when he gets back into the game in order to snuff out the cocky little shit who killed his dog the crime world takes notice... especially since this little rat bastard happens to be the son of Wick's ex-boss, who now runs one of the biggest organizations on the east coast.

You've seen this movie before... the boss tries to make things right, Keanu won't accept that, and then a price is put on his head. Every assassin in the New York area comes in to try to take him down, but all that ends up happening is they slow his progress as he terminators his way towards his target.

The reason this one works where so many others fail is mostly in its world building. There are little details that paint a giant picture in every aspect of this film. Every supporting character feels like they could lead their own movie, be it John Leguizamo's loyal chop shop manager or assassin hotel concierge Charon (Lance Reddick) or the old man who runs the crews who clean up after ever bloody encounter (David Patrick Kelly). And that's not even touching on the actual assassins in the movie, which include a very fiery Adrianne Palicki and a sniper gun wielding Willem Dafoe.

Each one of those people instantly make their characters interesting, so the world feels more complete. I mentioned the assassin's hotel... there's a place in New York where all the most ruthless contract killers can mingle, sleep, drink, hideout and converse in safety... as long as they have gold coins (which seems to be the preferred method of payment for killers in this universe). No violence, no jobs. Them's the rules and woe to the person who breaks those rules. The place is run by Ian McShane, a man you definitely don't want to insult.

That singular concept, a neutral ground hotel for contract killers, just by itself makes John Wick better than 90% of the action flicks made today, both on a studio level and low budget exploitation level. Not only is it a great idea they execute it well, too.

Speaking of good executions, John Wick is a perfect vehicle for Keanu Reeves. He's quiet, precise, deadly, but also has these perfectly timed eruptions of emotion. Reeves' on-screen action is the best he's had since the Matrix movies. Gun-fu, jiu-jitsu and just pure hand to hand badassery are perfectly choreographed. There's a consistency to Wick's brutality even as he changes up his method of pain delivery.

The character also has a righteousness about him that helps carry him through the movie. I heard a lot of people calling this Keanu's Jack Reacher and it's an apt comparison. First time feature director Chad Stahelski came from fight choreography and second unit directing and as such puts a great deal of long take, wide angle action beats in the movie. When punches land they hurt. When a bullet hits you feel it. You'd think it'd get boring watching Keanu Reeves shooting people in the head over and over again, but damn it if they don't keep making each and every headshot applause-worthy.

John Wick exists in that sweet spot between deadly serious and goofy. It's a movie that is fun as hell without sacrificing things like character development and smart plotting. In short, it's what I wish was the standard studio action output.

Now let's talk about the other side of that coin, Joe Lynch's EVERYLY starring Salma Hayek. 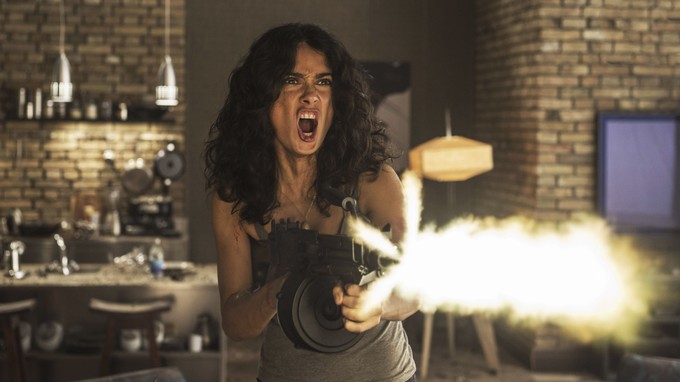 It's unfair to directly compare the two movies because while I'm sure John Wick was done on a responsible budget, it still had considerable financing. Lynch's film is big, but if you pay attention to indies you'll recognize that it takes place almost entirely in one room and one hallway, a sure indicator of budget stretching.

To Lynch's credit, he takes that very considerable restraint as a challenge to keep the action going hard and heavy so you never start getting bored with the surroundings.

Quick plot break down time! Salma Hayek is turning on her kinda boyfriend/kinda kidnapper big bad gangster guy. She's been his sex captive for just about 5 years at this point and has found a way to snitch on him, get out and back to her daughter. Sadly we don't even get to see that tiny bit of hope as the movie starts shortly after she's found out. She's been very badly abused and has to make a decision: end her misery right there in the bathroom with her hidden toilet gun or make a stand. It's Salma Hayek, so naturally she chooses to fight.

The easy one-liner for this is Die Hard in an apartment. It might be super easy, but it's a great way to instantly understand the kind of ride this is. She leaves the bathroom in nothing but a slip and kills 4 or 5 dudes in the room and immediately takes a bullet to the midsection. It's not life-threatening, but she gets really injured right off the bat, letting us know that she's not gonna have an easy time of it.

Everly only wants to get some stolen money to her family and to eliminate the yakuza fucks that are putting them in danger. She's prepared to die and kind of hoping it happens because if she does die she believes that'll make her crazy ex less likely to brutally murder her young daughter as punishment for Everly's transgressions.

The film is at its best when it's playing with humor. This apartment she's in happens to house many of big bad Taiko's employees... most of whom happen to be either whores or assassins... or assassins who are also whores. So when a price is put on Everly's head, she's trapped in her room with a steady stream of threats coming in.

The movie's at its best when it's jokey and fun. When not fighting Salma directly, these (mostly female) assassins fight with each other trying to keep the bounty for themselves. There's a particularly fun scene with Jennifer Blanc where chaos erupts as these hitladies fight over who gets to kill Everly.

On the whole, the film is a bit inconsistent and there's some loose plot threads that contradict each other (for instance Everly has a bag of drug money stashed away, but the characters go out of their way to say that Taiko wouldn't let her have access to any money... soooo, where'd she get it? Did I miss something?), but it's always earnest. Lynch feels like he's playing with all his favorite fetishes here. You can feel the influence of McTiernan, Tarantino, Miike (especially when the characters Sado and Masochist come into play) and perhaps early career Rodriguez.

I feel like the movie loses a little of its fun edge when it transitions into the Miike world and never quite fully finds its way back to that incredibly fun first act, but I never sat there bored.

Before I go, I have to bring up my absolute favorite aspect of this film and that's the relationship that develops between Hayek and Akie Kotabe. His character is named “Dead Man” and that's not really a lie. He was one of the initial group that Salma slaughters when she exits the bathroom at the beginning. She did nail him, but it's a gut shot and spends his entire role either unconscious or slowly dying on Salma's couch.

He's a young man, a guy who is working for the big boss out of fear, not because he's inherently a bad dude. Everly doesn't trust him, but he slowly starts proving his worth as the story goes on. The closer to death he gets, the more she likes him.

This dynamic is the sharpest, most original part of the movie and I wish there was more of it there. If the whole film had been a character piece between just these two (a dying man and the woman who justifiably shot him) talking between waves of assassins I think it would have been my favorite movie of the festival.

Kotabe is so likable in the role and the character writing for Everly is at its best in their scenes together. In a movie with some peaks and valleys, this relationship was the highest summit. For me, anyway.

That's it for those flicks. Still a ton more to go!