Ahoy, squirts! Quint here. MondoCon is more than just a bunch of poster nerds gathering together vying for different limited edition prints. The focus of the Con seems to be on the artists with an eye towards hosting intimate panels with these legends.

My focus this weekend has been on Fantastic Fest, but I have made two quick trips up to MondoCon. The first was to check out the prints, LPs and say hi to old friends. Today the detour was to check out the coolest sounding panel ever: brilliant artist William Stout discussing the almost made 1983 Godzilla film. Genre favorite Steve Miner was to direct a script by the great Fred Dekker. This project made it through a lot of development, with Rick Baker brought on board to build a full scale animatronic Godzilla head and Dave Allen to execute the majority of Godzilla's screentime via stop motion.

William Stout came on with another great artist named Dave Stevens to do storyboard and concept art. Stout's work so impressed the producers that he ended up being promoted to Production Designer. Apparently his storyboards detailed the sets so specifically that he was already kind of doing that job.

Stout took the stage with Mondo head honcho Justin Ishmael to give us the backstory to the genesis of the project (calling Dekker's work the “best script I've ever read”) before taking to the first row with a mic and a flashlight to cue the old school slide projector and walked us through the movie that could have been. 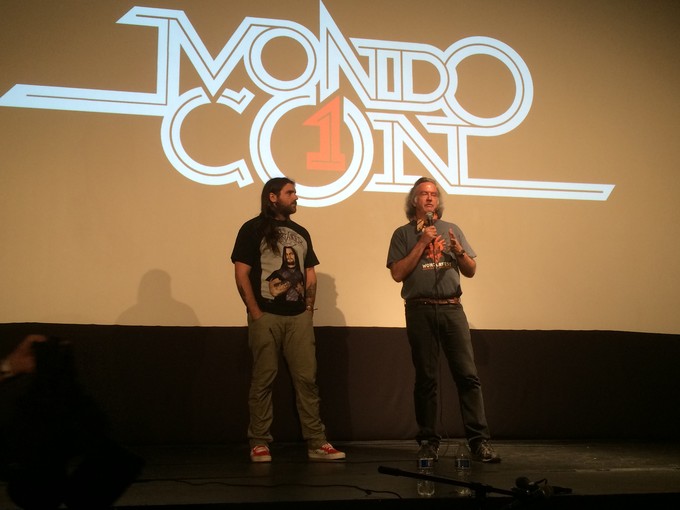 So, Steve Miner was coming off the heels of two genre successes in Friday the 13th Part 2 and 3-D and somehow got the rights to attempt to launch an American version of Godzilla. Pre-Night of the Creeps and Monster Squad Fred Dekker wrote the script and William Stout was brought on to do storyboards and pitch art (and, as mentioned above, eventually was elevated to production designer).

They built a pitch package to try to get a studio to sign on to this ambitious project, which was planned to film in 3-D. Stout ran through the storyboards he had, which covered a goodly amount of the action in the film. I was able to snap a few photos, which I'll pepper into the rundown below.

The film started with a quote: “Listening through the mist --- distant glow of dragon's cries, a warrior waits” before opening in space on a meteor flying towards camera. On Earth some dudes at NASA notice it and realize it's headed towards a satellite carrying nuclear missiles .

The meteor crashes into the satellite, sending one nuke crashing towards the Earth. The NASA guys are able to fire an interceptor missile to knock the nuke off course, away from populated lands and into the sea. It crashes into the water and shortly thereafter detonates. The NASA guys cheer, but the music was supposed to be ominous as the camera pushes into the irradiated water, past fish carcasses, with the title “GODZILLA 3-D” materializing.

He then went through a sequence that introduced the Snake Plissken-esque eye-patch wearing hero of the story, a character by the name of Daxton. There's a salvage flotilla at sea with some trawlers going about their fishing duties around them. One of these trawlers gets raided by scuba divers who turn out to be Russian bad guys (this was 1983, afterall) who want to be able to spy on the flotilla.

They see Daxton arrive. Turns out he's there to investigate something under the water. He takes a team and dives down to a sunken sub. The storyboards made it look like a bit of a horror movie sequence. Dark, creepy, empty sub. No sign of life or death. It's just empty. For a while, at least. They soon start finding bodies and one of Daxton's crew grabs his throat and collapses. The rest put on their regulators and breath tank oxygen as they follow the trail of bodies to a room containing nuclear missiles. One is missing.

Stout didn't say, but I'd guess this sequence happens a little bit after the above-mentioned arrival of Daxton since I'm pretty sure it's supposed to be those Russians getting there before our hero does, gassing the crew and getting out with a nuke.

Some of the connecting tissues will be missing since they didn't need to storyboard most of the exposition stuff and Stout said he hadn't read the script in decades.

The next sequences shown all focused on teasing the arrival of Big G. One very Jaws-like scene sees a fishing trawler (which was boarded to look exactly like the Orca, by the way) whose nets get snagged by something big under the water, which starts towing them around the ocean until they cut free. Another shows some Islander kids playing around a small pond. Camera pulls up to reveal that pond is in the shape of a giant lizard foot. Some soldiers cut through the pond as well, not realizing what they're walking across. Those soldiers enter a village and notice radiation burns on some of the villagers. Something big catches their attention. The soldiers look up, fear on their faces. Cut to...

An iguana's face. This is little Kevin's pet iguana who he's showing off at a school show and tell. Kevin is Daxton's kid and was to be one of the main characters of the story. He goes to school in San Francisco, gets made fun of for bringing an iguana to school and when his hot mom (drawn to look like Pat Benatar) picks him up from school that doesn't help his rep very much.

There was some stuff establishing Kevin as Daxton's kid (shots of his father driving across the Golden Gate Bridge to pick him up, etc) and a bit where this 10-ish year old boy is driving a jeep around sand dunes, his father in the passenger seat looking nervous.

The first big reveal of Godzilla is a personal connection moment between the King of Monsters and this kid. Kevin's iguana rests on his shoulder as Godzilla comes across him. It seems to confuse Big G that this human is friends with a reptile and he regards him curiously before heading off... you know, to fuck up San Francisco. 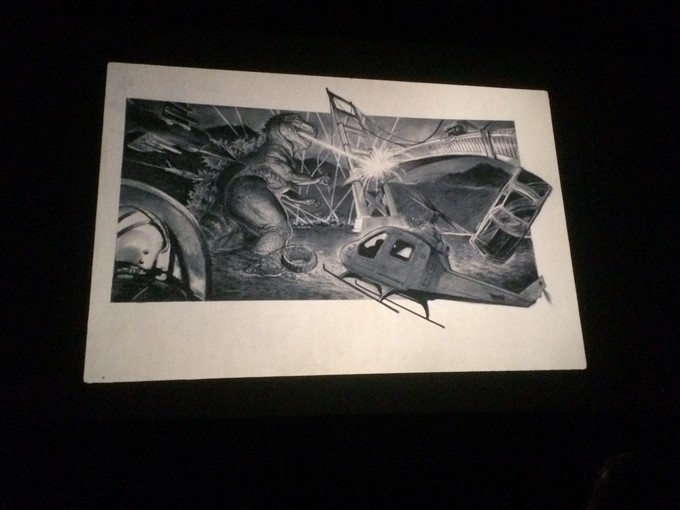 Much like the recent Gareth Edwards film, he starts with the Golden Gate bridge and moves into the city, the idea being he would be fighting army tanks and choppers and cops and other annoying humans as he destroyed famous San Fran landmarks, including DiMaggios. There were many boards showing army guys firing bazookas at Godzilla, tanks firing on him, etc.

For some reason the Russian bad guys are also in the mix and are in a chopper which Godzilla takes notice of. While trying to evade, the main Russian bald bad guy falls out. Godzilla catches him in the air, looks at him resting in the palm of his hand and then squishes him. As you do.

Not exactly sure the order of events here, but I take this to be part of a big late second act or early third act sequence. I do know that Godzilla ends up hiding out at Alcatraz and that's where the finale is set.

Daxton is piloting a fancy helicopter of some sort that's able to fire one nuke. The plan is to fire it directly into the monster's mouth, detonating inside the beast.

This puts young Kevin in a bit of a bind. He has a bond with Godzilla, but the monster is tearing up the city, killing people and will kill his dad if he doesn't step in. So, he calls out to the monster, distracting him away from his father and allowing him time to aim and launch the missile. 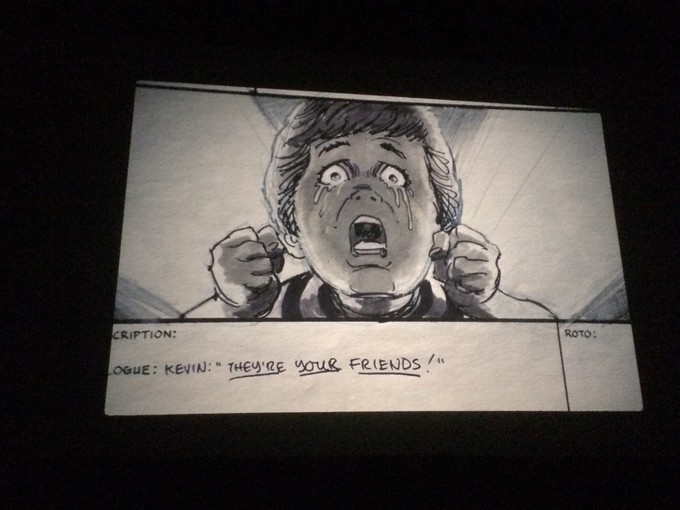 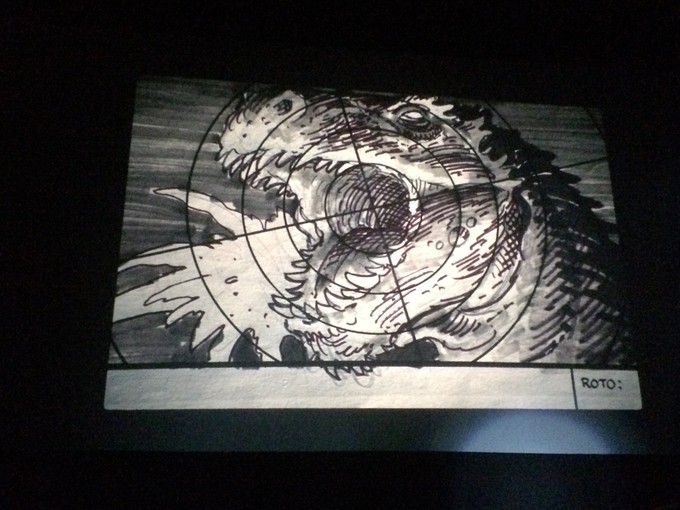 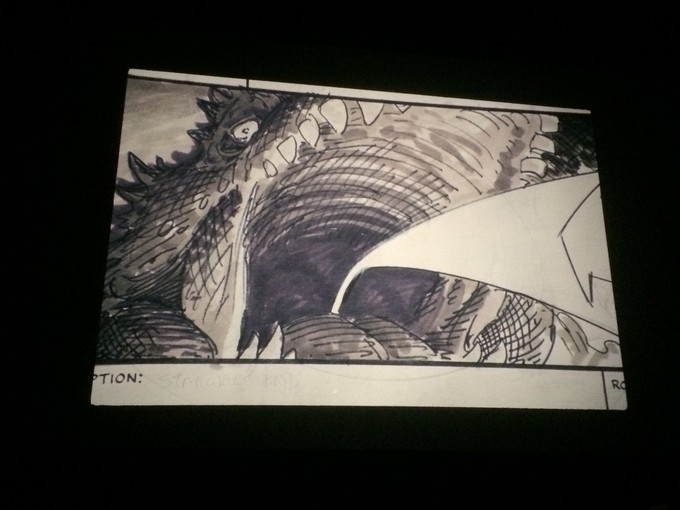 Godzilla crawls towards the ocean after the nuke goes off inside him. I couldn't tell if he sinks into the water or dies on the shore, but either way it's sad for Kevin (and us, too, probably). 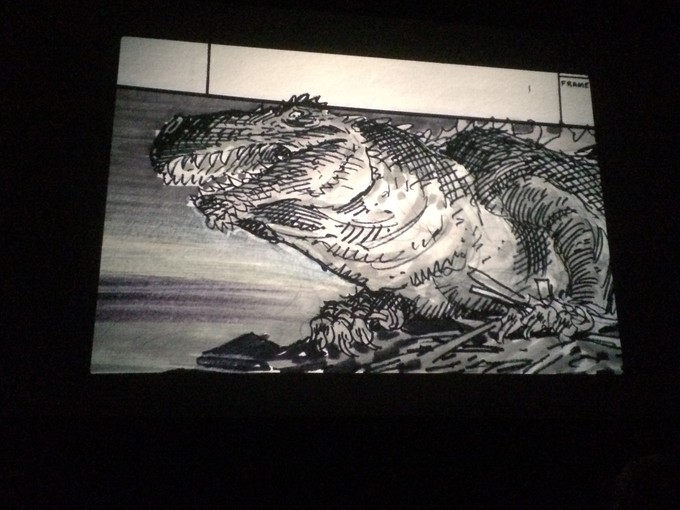 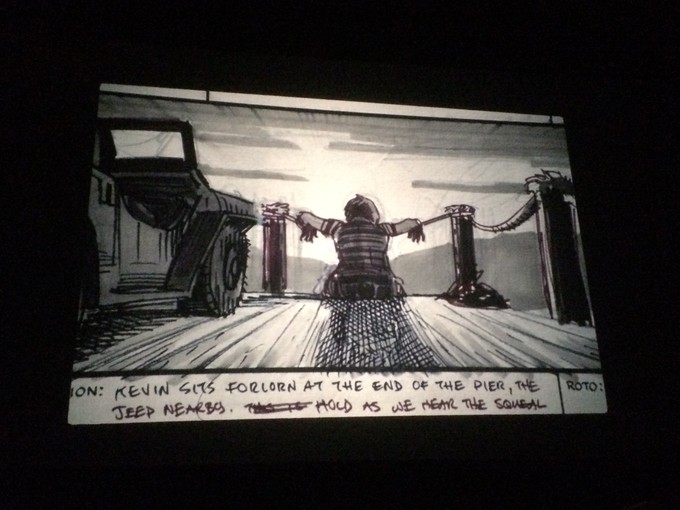 But at least Kevin has his family back safe and sound:

That was all she wrote in terms of story beats. The rest of the panel was a Q&A, mostly focused on why it didn't happen. Stout said that at every studio the outcome was exactly the same. They'd get 14 yeses as the project rose up to the top guy and every single studio said no at that stage. Apparently this was right after there were a handful of major budget bombs, including Heaven's Gate, and all execs were gunshy about giant budget movies. Nobody wanted to take a risk, so while everybody agreed the presentation was amazing and the crew they had gathered was great it always fizzled at the top level.

That's about it. A neat glimpse at a movie that never happened. Miner and Dekker ended up collaborating on HOUSE a few years later before Fred got his great one-two punch of Night of the Creeps and The Monster Squad going and Steve found some quality studio work (I still really dig Forever Young and Lake Placid is friggin' great!).

It's possible I may have access to that Dekker draft. If I can dig it up I just might read it and write up a detailed review/rundown of it. If you guys are at all interested in that let me know in the talkbacks below!

With that panel covered I'm back to focusing on Fantastic Fest! Behind on some reviews and I got a sweet Keanu Reeves interview to post as well (I miiiiight have made him promise me that Station would come back if they ever made a Bill and Ted 3). Stay tuned!