I'm a big DAILY SHOW fan, so I've been anticipating ROSEWATER for quite a while now.  I have been following this story since it was unfolding in 2009, when Maziar Bahari and others were imprisoned in Iran after covering protests following the problematic elections there, and after they did interviews for THE DAILY SHOW.  Bahari was accused of being a spy by the regime, put into solitary confinement, and psychologically tortured for months.  The show and the international community kept up the pressure, and eventually Bahari was released after "promising" to spy for Iran and paying $300,000 bail.  He wrote a book about it, THEN THEY CAME FOR ME.  Eventually Jon Stewart himself converted it into a screenplay, took several months off from hosting THE DAILY SHOW, and shot the film adaptation, ROSEWATER, starring Gael Garcia Bernal as Bahari. 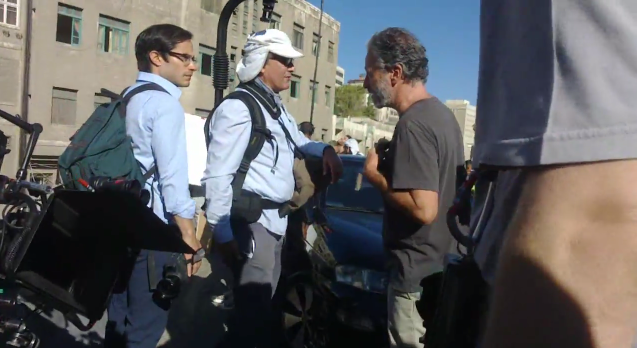 It delights me to see that Jon Stewart is as talented a filmmaker as he is a comedian and TV producer.  The subject matter of ROSEWATER is important, and Stewart has communicated it in a clear, compelling, accessible, and heartfelt way.   This was no simple task, given that it involves painting a picture of a country and politics that many Americans (and others around the world) are unfamiliar with, and telling a story where the bulk of the film takes place inside a prison.  The first problem was solved through conversations with characters, TV reports, and coverage of the run-up to the election and street protests.  As far as the prison sequences go, Bahari's father and sister had previously been political prisoners in Iran, so Stewart uses the device of imagined conversations between them and Bahari in his cell to reveal his state of mind.
Stewart resists the temptation to amp up the drama by magnifying the physical abuse Bahari was subjected to.  Most of the torture was mental -- solitary confinement, being continuously blindfolded, psychological trickery, and mock executions.  That can be hard to portray, but one clever choice is that for this stretch of the movie, the audience is as in the dark as Bahari is.  We don't see what is going on on the outside -- we just see the relentless drudgery and confines of the prison, cut off from the outside world.  The fact that we get put into Bahari's state of mind without getting bored ourselves is a testament to Gael Garcia Bernal's acting, skillful editing, and Stewart's intimate understanding of both the story and the needs of the audience.
It is unusual to cast a Mexican actor as a Persian, and Stewart was asked about that at the Mavericks conversation (where he appeared with Maziar Bahari) the day before the premiere.  He said that initially he wanted to be completely authentic -- Persian actors, people who had actually been in prison, and the dialog in Persian.  But eventually he was convinced that the objectives of the film would be best served if the story could reach the widest possible audience.  That meant doing the film in English, and with a name actor.  While I was skeptical at first, in the end I think it was a sensible choice, and Bernal is convincing in the role.
I suppose I shouldn't be so surprised that Jon Stewart excels at filmmaking just as he does producing a TV show.  Many of the tools are the same:  you have a story to tell, performers, writing, cameras, and graphics -- it is just that you have longer to work on and perfect a film.  As he revealed at Mavericks, "It's all content generation... it's not alien compared to what we do at THE DAILY SHOW."
It is a big step to take time away from your TV show, and hand it over to John Oliver for a few months.  When asked about that, Stewart said that he figured Oliver would ultimately get his own show, adding, "Once you get the ring, it it hard to go back to being a Hobbit."  Still, the film was a passion project for him.  Initially, Bahari and Stewart came up with their dream list of writers and presumably directors for the project.  But of course those people had other commitments, and the process dragged on.  Since they felt that the story just had to get out soon, Stewart decided to just write the screenplay in his free time, and ultimately direct the film himself.
It is clear that Stewart is passionate about the subject matter.  The Daily Show segments that started the whole mess were actually about how ridiculous it is to declare a whole country evil.  But about the actions of the regime in this particular case he said, "If you are going to feed me dogma as truth, go fuck yourself."  And he clearly has a deep affection for Maziar Bahari and the actions of reporters all around the world risking their lives to bring us news, adding, "Don't capture journalists, because they remember shit."
Jon Stewart is well known for using comedy to ridicule and shine a light on idiocy and bad behavior not just in the US, but around the world.  I'm happy to see that he's got a whole other arsenal of tools in his repertoire as well -- he's an excellent screenwriter and director, and a passionate friend of those making a difference.
Copernicus (aka Andy Howell).  Email me or follow me on Twitter.
Follow d_a_howell
Readers Talkback
comments powered by Disqus
Top Talkbacks
Trending