I've never seen a biopic with the subject in attendance, which made Sunday's premiere of LOVE & MERCY at the Toronto International Film Festival all the more special.  Brian Wilson and his wife Melinda were there, watching Paul Dano and John Cusack play the musical genius, and Elizabeth Banks play Melinda.  Cusack, Dano, Banks, and director Bill Pohlad watching Brian Wilson watching them, making it all the more mind-blowing. 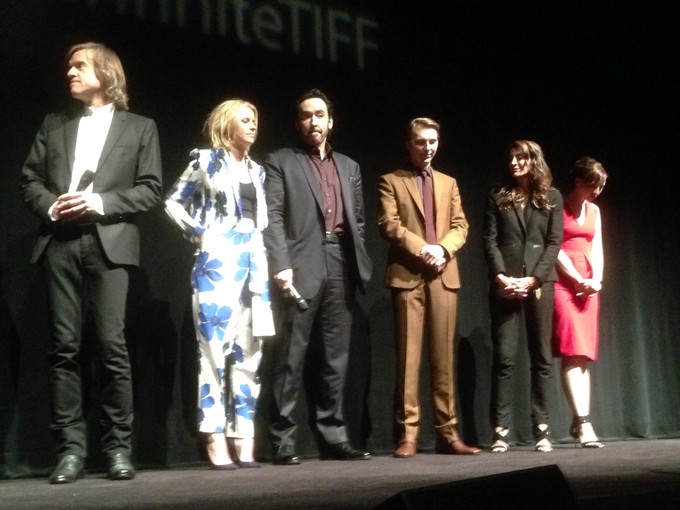 LOVE & MERCY is not a traditional biopic.  Instead, it shows two critical phases in Brian Wilson's life.  In the younger era, set in the early 60s, Wilson in played by Paul Dano at the peak of his career.  He's shown before, during, and after the recording of one of the greatest albums of all time, PET SOUNDS, but he's already starting to show signs of mental illness.  In the second phase, set during the 1980s, John Cusack portrays Wilson's struggle with mental illness, his life being controlled by Dr. Eugene Landy (Paul Giamatti), and meeting his future wife Melinda.  The two time periods are intercut, allowing a fascinating comparison between the two actor's takes on a troubled genius.
This conceit has other advantages too --  by intercutting, neither narrative gets stale.  And it allows the filmmakers to explore the central struggles in Wilson's life -- within his family, within the band, to get his music made, with mental illness, and with the people seeking to either support or control him.  The cuts between time periods also add a unique perspective that both contrast and sometimes resonate with one another.
The 60s scenes have a 16mm look, with apparent film grain and a more handheld aesthetic.  This is used to varying degrees, sometimes mimicking surviving footage of Wilson or the band shot-for-shot.  When it isn't duplicating real footage, the look is toned down a bit, but it blends seamlessly into the narrative.  Similarly, Dano's voice is mixed into Wilson's during the singing segments.  It is only jarring the first time, since hearing Wison's iconic voice coming out of Dano's mouth is a little strange to see at first.  All-in-all the filmmakers went to great lengths to reproduce the look and feel of each era, which, combined with the participation of Wilson, give the film a high degree of authenticity.
Of the two actors, Dano immerses himself more thoroughly in the role.  John Cusack is so recognizable, it is hard to see him as anything other than himself, but he still conveys the core emotional truth of a man discovering love and battling mental illness.  Dano is a bit more of a chameleon, but it surely helps that he has the shaggy hair, music, and 60s stylings to blend in.
The 60s scenes are my favorite, because they spend a lot of time showing Wilson's creative process.  We see him coming up with melodies, lyrics, directing musicians, and struggling with band mates.  And PET SOUNDS is such a complicated, layered, and nuanced album, it is fun to see just how much thought, meticulousness, and struggle went into producing it.
At first glance, it may seem strange to show the 80s scenes at all.  But they are in some ways the core of the film.  The 60s sets up Wilson's genius and insecurities.  But the 80s segments reveal the humanity.  During that time, Wilson was particularly fragile, and being heavily drugged and manipulated by Dr. Eugene Landy.  And he was finding love in Melinda, though she could scarcely get close to Wilson because of Landy's meddling.  That reclusive time is particularly fascinating because it is the most mysterious to fans.  This structure also gives the film two sets of struggles and payoffs, and it sets LOVE & MERCY apart from the typical struggle-fame-downfall-resolution of more traditional musical biopics.
This has been a festival full of films about real people. including ones on Alan Turing (IMITATION GAME), Stephen Hawking (THEORY OF EVERYTHING), and John du Pont (FOXCATCHER).  Of them all, I found LOVE & MERCY to be the most compelling, entertaining, and inventive.  Whether you are a Beach Boys fan or not, LOVE & MERCY is well worth checking out.  It is a well crafted look at a complicated, fascinating man who will be remembered long after the rest of us are gone.
Copernicus (aka Andy Howell).Email me or follow me on Twitter
Follow d_a_howell
Readers Talkback
comments powered by Disqus
Top Talkbacks
Trending