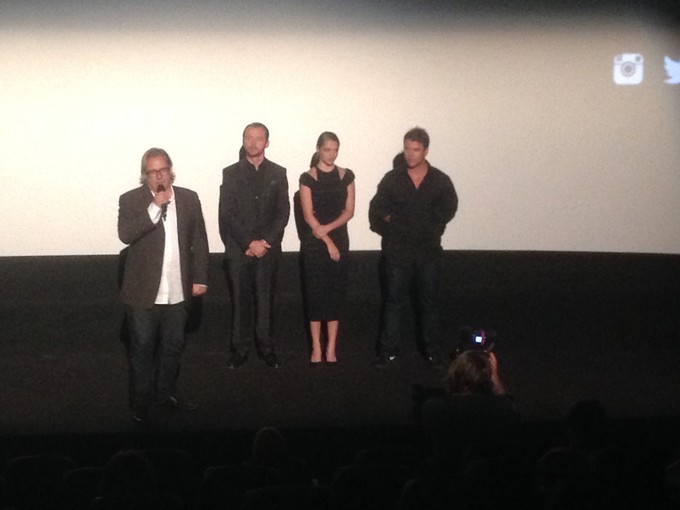 Simon Pegg as an assassin -- who doesn't want to see that? In KILL ME THREE TIMES, he's about the only competent killer in a scrum of characters each sleeping with, stealing from, and trying to off each other. I love a good multiple murder plot, especially if the main players range from marginally to completely incompetent. Plotting to kill someone, whether you succeed or not, has a way of efficiently revealing the essence of a character.

The latest from Australian director Kriv Stenders, KILL ME THREE TIMES is solidly a stylized genre film in the vein of a noir or crime caper. It owes a lot to the Coen Brothers, particularly BLOOD SIMPLE, which the director said was one of his two main influences. The other was the Stephen Frears 1984 film, THE HIT. There's little more than a nod or wink to realism here -- it is set in a fictitious small town in Australia where there seem to be few other people aside from the half-dozen main players. The characters are mostly archetypes without much of a back story -- they are there to play a role in furthering the plot and then are dispatched somewhere on the spectrum from shocking to comedic effect.

I can't give away too much of the plot, especially because it is only gradually revealed nonlinearly. In short, there is a husband and wife dentist / receptionist couple, played by Sullivan Stapleton and Teresa Palmer, who are plotting to fake the wife's death in order to collect the insurance money to cover the husband's gambling debts. To do this, they must actually murder Alice (Alice Braga) and switch the dental records. Alice is married to the psychopathic Jack (Callan Mulvey), but is banging the mechanic Dylan (Luke Hemsworth) on the side. Initially, Simon Pegg seems to be watching it all unfold from a safe distance, but who hired him? There is a stash of money, cars and bodies to be disposed of, a corrupt, meddling cop, and a wide assortment of weapons.

KILL ME THREE TIMES is a fun ride that just breezes by thanks to the strong plot, tight editing, and solid performances. It isn't the kind of film that is going to be nominated for any academy awards, but it isn't trying to be. This is pure genre fun, executed with precision and glee.

It is interesting to see Simon Pegg as the heavy. His role isn't without comedy, but neither is that the main purpose of it. Wearing a black suit, and brandishing a sniper's rifle, he projects determination and competence -- at least until things get completely out of hand. Since he's the first character we're introduced to, the most competent one, and the biggest star, he's the one the audience is kind of rooting for. But when you stop and think about it, he's a cold-blooded killer, and an awful human being with few redeeming qualities. That kind of manipulation shows you the power of cinema, and the skills of those involved in making the film -- the combination of writing, directing, and charisma that can get you to upend your value system.

While there are influences from Tarantino and the Coens, KILL ME THREE TIMES isn't as deep, heavy, or polished as their best work. Still, it is of the same vein, and is a fun time at the movies. Maybe the closest thing I've seen recently is SEVEN PSYCHOPATHS, although KILL ME THREE TIMES is more tightly plotted and less self-indulgent. If you are a genre fan, or a Simon Pegg fan it is well worth checking out.