The Toronto International Film Festival declared Friday to be Bill Murray day. In celebration, they showed GROUNDHOG DAY, STRIPES, GHOSTBUSTERS, and premiered his new film, ST. VINCENT. In true Bill Murray style, he showed up to the premiere in a crown and sash, along with his costars Melissa McCarthy, Chris O'Dowd, Naomi Watts, Jaeden Lieberher, and first time director, Theodore Melfi. 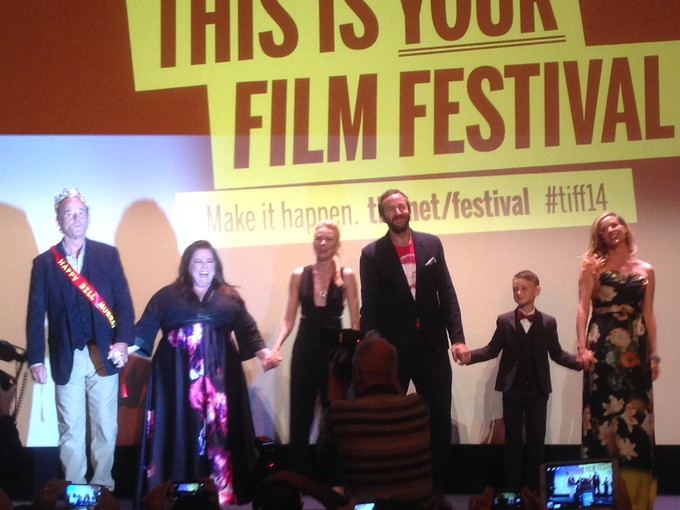 As is generally true with films that the elusive Murray commits to these days, ST. VINCIENT is a winner. The packed Princess of Wales theater gave it a standing ovation while wiping away tears. The film has a lot of heart, without being overly sentimental, and of course with the cast it has, it delivers as a comedy too. It is a lock to be nominated for the Golden Globe for best comedy.

Bill Murray plays Vincent, a crabby, down-on-his luck, penniless and often drunk old coot. Early on, we see him screwing a pregnant Russian hooker (Naomi Watts) in his bedroom lined with marriage photos. Later we find out they are of his wife, who is in a nursing home with dementia. When Maggie, a single mom (Melissa McCarthy), and her elementary school aged adopted son, Oliver (Jaeden Lieberher), move next door, the misanthropic Vincent starts fighting with them.

Through a sequence of events, Vincent ends up being forced to babysit Oliver. While he professes disgust for the idea, he quickly figures out that he can use this new line of work to make some much needed cash. His brand of babysitting involves taking Oliver to seedy bars and teaching him to bet at the horse track. Meanwhile, in school, Oliver, who isn't even Catholic, is learning about saints from Brother Geraghty, played by Chris O'Dowd. You can see where this is going -- Vincent and Oliver become an unlikely pair, although Vincent's bad influence doesn't bode well for Maggie retaining custody in the divorce proceedings.

ST. VINCENT is funny, but the humor arises more from the outrageous situations and Bill Murray's deadpan delivery than from jokes, or from Melissa McCarthy's famous improvisations. In fact, humor here takes a back seat to the plot and the characters, which is a good choice, because the script is phenomenal. At the Q&A after the screening, director Theodore Melfi, who also wrote the screenplay, said it came out of two true events in his own life. His brother died, leaving him to raise his niece, who is about the same age as Oliver, and they put her in a Catholic school, even though she isn't Catholic. And Bill Murray's character is basically his father-in-law. 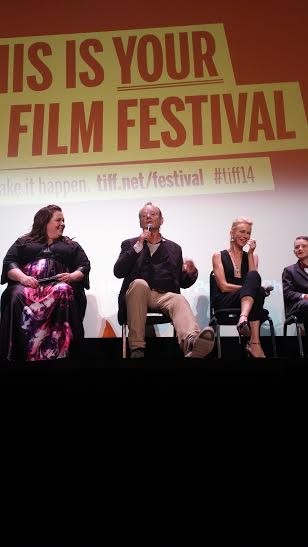 The tone of ST. VINCENT is something like ABOUT A BOY meets BAD SANTA. This could go either direction, but the magic here is that they managed to keep things well-balanced. They never get over the top with sentimentality, nor do they get overly raunchy just for shock value. It is a tough tightrope act, but many of the actors commented that the tone was obvious from the script, and they took their queues from that. Theodore Melfi is obviously a great writer to attract such talent to his screenplay, but he's got chops as a director too. Sometimes with actors who love to improvise, things can go off-script in an indulgent way, but here he maintains focus on the core of the story. The only exception is a subplot involving a gambling debt owed by Vincent to a character played by Terrence Howard, which seems to go nowhere. I am guessing the resolution of that subplot would have seemed like an afterthought after the big climax of the film. But it may also be a choice not to wrap things up nicely in a bow.

We know all the actors you've heard of can act. But the actor who plays Oliver, Jaeden Lieberher, is a revelation. He just nails every seen he is in. He's cute without being overtly so, and he injects just the right amount of angst for a kid going through his parents divorcing and adapting to a new school. And balancing the tone of not-too-cute, not-too-much angst, has to be hard for any actor, much less a first-time child actor. Some of the credit must also go to the director for choosing the right takes. Still, this kid has really got it -- he's amazing.

All in all ST. VINCENT is funny, has heart, and hey, it is Bill Murray at the movies. That's hard to beat.