Copernicus judges THE JUDGE at TIFF! 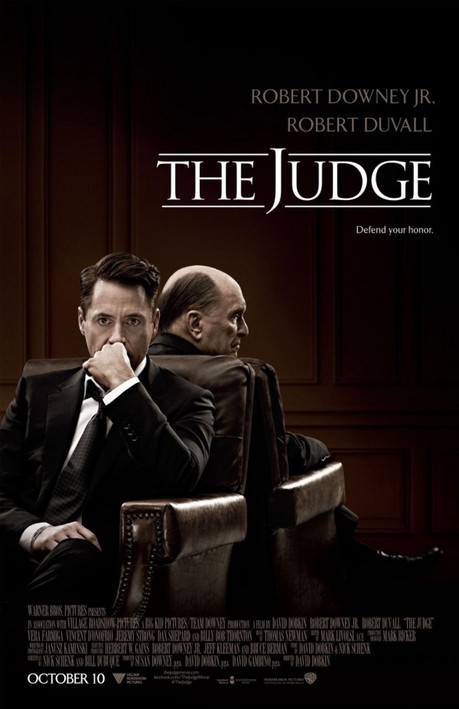 The opening night film this year at the Toronto International Film Festival is THE JUDGE, a courtroom / family drama starring Robert Downey Jr., Robert Duvall, Vera Farmiga, Billy Bob Thornton, and Vincent D'Onofrio. Robert Downey Jr. plays Hank Palmer, a hotshot big-city lawyer who has to return to his small-town home when his mother dies. He hasn't been there or spoken to his family in more than 20 years. This is primarily because of a falling out with his father, the titular judge, a stubborn tough-love type. Before long, Hank figures out that his father has a secret, and worse, is to be put on trial. Wouldn't you know it, Hank has to defend his father, even though the two can barely speak to one another. While stuck in town, he tries to reconnect with his brothers, the ex-baseball prospect Glen (Vincent D'Onofrio), and the mentally challenged Dale, played by Jeremy Strong coming in at just-under "full-retard." Rounding out the cast, Billy Bob Thornton is the nemesis lawyer for the prosecution.

Yes, the "surprise, you're my reluctant lawyer in a trial that reveals so much about our relationship" schtick is a dressed up version of a STAR TREK: THE NEXT GENERATION trope, with down-to-earth provincials standing in for space aliens. Cross that with the midlife crisis / estranged son / dying parents festival fare, throw in a dysfunctional, partially mentally handicapped family, and an old flame, and we're square in the middle of overreaching for Oscar territory.

But that makes THE JUDGE seem worse than it is. It is entertaining enough. Who doesn't want to see Robert Downey Jr. chew the scenery with Robert Duvall for 2.5 hours? In fact, the running time is never a problem -- the film whizzes along from plot point to plot point, while still giving the characters plenty of space to develop. The editing is tight - I never looked at my watch, and I don't think there is anything I would have cut.

The major problem is that this feels like an overwrought, overproduced, test-marketed Hollywood affair from top to bottom. There are no surprises -- the script always feels like a script and never ventures into anything you'd mistake for real life. Random encounters, characters dying, revelations, and epiphanies happen right on schedule. And they are always accompanied by a musical cue telling is exactly how to feel. There are heartfelt, earned moments in the film, to be sure. It is just that you can see them coming from a mile away.

Sadly, Billy Bob Thornton is wasted here. His underdeveloped character is little more than a foil for Robert Downey Jr. Vera Famiga and Vincent D'Onofrio also give good performances with characters that don't have a hell of a lot to do. This is really a two-man show, and Downey and Duvall are both hitting right in their respective wheelhouses. This is both a strength and a weakness -- they are playing the types of characters they excel at, and we've seen them play before. But we never once think of them as anything other than Robert Downey Jr. and Robert Duvall.

Actually, my favorite thing about the film is the song that plays over the end credits -- Willie Nelson doing a cover of Coldplay's THE SCIENTIST. That alone is almost worth the price of admission. It is a shame that the actual score of the film is handled in such a ham-fisted way.

With a little less polish and manipulativeness, THE JUDGE could have been a winner. As it is, it is mildly entertaining, but ultimately forgettable.