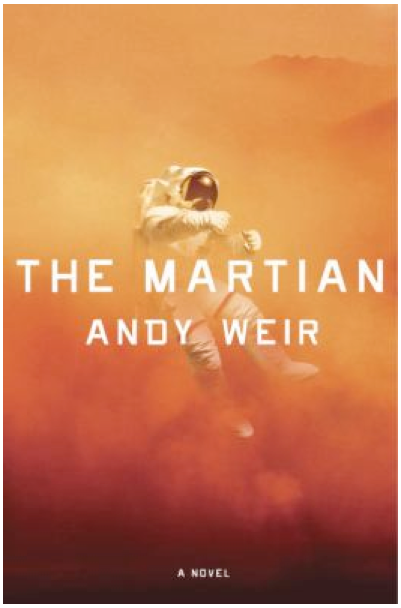 At the 2013 Butt-Numb-A-Thon Ernie Cline and I got to talking and he was telling me that I just had to read this book called THE MARTIAN that at the time was not yet even published.  He sent me a copy, and I was just blown away.  It was my favorite thing I read all year.

It is right up my alley – it is an incredibly realistic story about an astronaut who gets stranded on Mars.  It is so realistic, there are even calculations in the book!  But the real reason it is great is the writing is outstanding -- it mixes humor, drama, and a driving plot that keeps you in suspense.

I’m not the only fan – THE MARTIAN is Ridley Scott’s next film, starring Matt Damon – set for release November 2015.

After Ernie put us in touch, Andy Weir was nice enough to answer some questions.  Since I’m too lazy to transcribe phone interviews, I asked them over a series of email exchanges, slightly edited here.

First off, amazing job on the book.  I love how you got the science right, and showed real calculations(!), while keeping the story so funny, and grounded in humanity.  You don't have to know anything about science or space travel to enjoy the novel, but if you do it is even more rewarding.  It is my favorite thing I've read in a while.

The book feels remarkably realistic.  How did you do the research and get the science right?  It is especially critical here, because that's where so much of the drama comes from.  Was it mostly the case that the drama fell out of real-world Mars mission concepts and those constraints, or how much came from the perspective of, "I want to this to happen so I need my Mars mission to have these components?"

I've been a fan of spaceflight all my life, so I started out with a fair bit of information already in my head. Though I did have to do a ton of research. Mostly I just did web searches and math.

I tried not to set up the mission to match desired plot points. I wanted it to seem authentic. So first came the plausible mission and equipment. Then came the story.

Have you always been interested in space travel and NASA?  Where did that interest come from?

All my life. I picked it up from my dad, who is also a big space nerd.

Yes, I always wanted to be a writer, but I wasn't willing to take the financial risk. I didn't leave my job as a programmer until The Martian had already become a commercial success.

I know you published THE MARTIAN on the web in chapters before getting a book deal.  In fact, I read the web version before the hardback came out.  It seems to have found an audience!  What was that process like?  And how much did it change between the web version and the hardback?

There was not much editing between the version I self-published and the version that's now available in hardback. The editors at Random House were pretty happy with it the way it was.

One thing I love about THE MARTIAN is the sense of humor.  The main character, Mark Watney is kind of a wise-cracking smartass, but in the most lovable possible way.  Is that based on your own personality?

Mark is based on my good qualities, while having none of my many flaws. I guess he's what I wish I were like. But yes, I am definitely a smart-ass.

Some have described this as "GRAVITY on Mars."  But of course you wrote this before GRAVITY came out.  What was your reaction to the movie?

I liked Gravity a lot as a fun space romp. It has a number of errors about how space travel works, but you know what? It's a movie. And 99% of the people watching won't catch any of the inaccuracies. The purpose of a movie is to entertain, and I enjoyed it for sure.

I agree about Gravity -- loved it as a film, but I wrote a whole article about the science.

As for Gravity, here's the biggest flaw: The abandoned Chinese space station had a ping pong paddle floating in it. Exactly what use would that be on a zero-g space station?

Dude, clearly they've invented a new game -- zero-g ping pong!  [Editor’s note – I said that as a joke, but it is kind of true!]

One question I had while reading THE MARTIAN was about radiation exposure.  Would he just die from cancer?  But recently I read an article came out in Science that answered my question.  The press release is here. Roughly, in the unshielded case he'd have a 5% higher cancer risk.  Not bad.

I admit I glossed over the radiation issue. While it's true that the additional cancer risk isn't that bad, the planned mission includes them being out of Earth's magnetosphere for over a year. I decided to make a concession to easier storytelling and just say the problem had been solved by materials technology. Or at least mitigated.

I do mention the issue in the book. At one point Mark says that the Hab Canvas has built in shielding and if it didn't he would "have so much cancer my cancer would have cancer".

There is a movie adaptation of THE MARTIAN in the works.  It has been reported that Ridley Scott is directing, Matt Damon is starring, and Drew Goddard wrote at least one adaptation.  How did that come about?  Can you give us any news?  Are they working from the Drew Goddard script or has it been rewritten?  How much have you been involved?

I'm fairly far out of the loop, so I don't know much more than what's publicly available. They are working from Drew's script so far as I know. I occasionally get questions from them about scientific details in the book, which leads me to believe they're taking the science pretty seriously.

Who are your influences as a writer?  What are some of your favorite books?

Asimov, Heinlein, and Clarke. My favorite Sci-Fi are the old classics from the 50's and 60's.

I love the READY PLAYER ONE "fan fiction" short story on your web site, Lacero.  It fit so perfectly into that universe.  And I know Ernie Cline is a big fan of your writing -- he sent me THE MARTIAN and told me I *had* to read it.  Novel writing is generally a solitary enterprise, but have you ever thought about doing something collaboratively, or maybe adapting another writer's work as a screenplay?

I never thought about collaborative writing. I don't think I could do that. I've never written a screenplay so I don't think I have the experience to adapt.  I greatly enjoyed Ready Player One. When I love a story I usually start thinking up fanfics right away.

People seem to be really passionate about THE MARTIAN.  What is your favorite thing you've heard from a fan?

I've gotten fan mail from astronauts and mission controllers. But I think my favorite moment was when I got the positive review from Larry Niven. I grew up reading his books and to learn he'd read and liked mine was amazing.

Is your next novel Zhek (or is is a whole series)?  Can you give us any details?

Yes, I'm working on Zhek now. I have it in mind to be a series, but we'll see how the first book goes and work from there. The story is less rigidly hard sci-fi and has more traditional elements. Though I take a scientific approach to them. :)

Thanks for interviewing me. :)