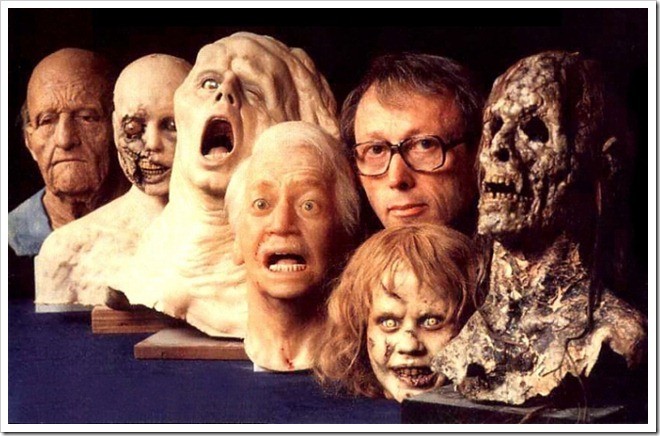 Hey guys. Quint here with some sad news for movie makeup maniacs like me. Word has reached me that Dick Smith died yesterday. The news broke late in the night and is reverberating through the effects community.

I never got to meet the man, but I did get to spend an evening with him and a few dozen of the best and brightest minds of Hollywood's makeup field at a tribute to his work put on by the Academy. When I tell you everybody in the makeup world that could be there was there, I'm not exaggerating. Rick Baker hosted, Greg Nicotero, Howard Burger, Tom Woodruff, Alec Gillis, Shane Mahan, Mike Elizalde and dozens of others gathered to pay respects to Mr. Smith.

Dick's legacy breaks down in two ways. The first way was, of course, his actual body of work. He started in the '40s and gained momentum in his field mostly via TV. He did the makeup work on a particularly creepy TV version of Alice In Wonderland (1955) and also some flat out incredible work on a Twilight Zone-ish show called Way Out.

In particular he did an effect that's still jaw-dropping today in an episode called Soft Focus about a photographer who finds out he can alter reality by retouching any photo he takes. His wife is cheating on him, so he gradually ages her up while de-aging himself. She finds out and knocks a photo of his to the ground while it's still wet. In his haste to grab it he accidentally steps on it. When he rises back up to camera, this is what we see: 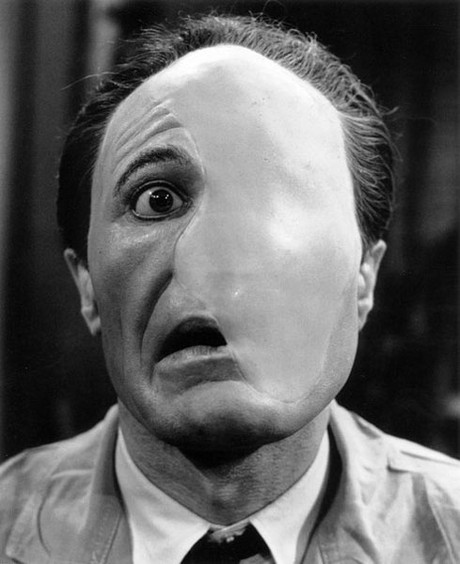 The most amazing thing about that effect is the regular part of the actor (Barry Morse)'s face is actually a build, too. If I remember correctly, it's a mask. That above photo is 100% an effect, not just half a prosthetic.

Rick Baker cites that exact effect (and finding out how it was done via Famous Monsters of Filmland) as what prompted him to go into the makeup business. Baker would later work with Smith in an apprenticeship position on The Exorcist, but that's jumping ahead a bit.

Throughout the '50s and '60s Smith worked on many shows and features, including Dark Shadows, but it wasn't until 1970 that he hit a ceiling and instead of stopping, decided to bust right through that fucker.

The ceiling in question was how to do a convincing old age makeup on a young actor who was going to play a man looking back over 100+ years of his life. The movie was Little Big Man and the young actor was Dustin Hoffman. 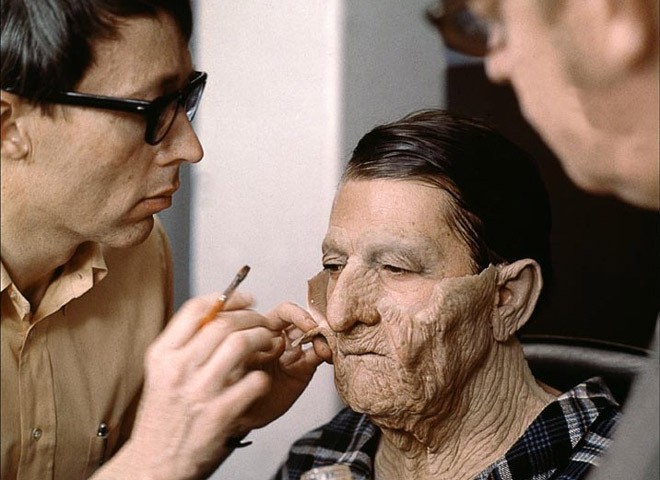 I've seen video of Smith applying Hoffman's makeup in which Smith was instructing Hoffman on how to act in the makeup. Smith was giving direction to him and much of that character (old age version, at least) as we know him in the movie comes from those early directions from Smith.

I assume Smith was the go-to guy for old age makeup because of his work aging Hal Holbrook up for the Mark Twain specials, but it's clear that his work in Little Big Man marked a big turning point for him and for the makeup industry as a whole.

Much of his most famous work is in old age makeup. He turned a 40 year old Marlon Brando into a 60 year old mafioso in The Godfather, he turned young Max Von Sydow into an elderly priest with a bad ticker in The Exorcist, he turned David Bowie into an ancient vampire in The Hunger and he won an Oscar for F. Murray Abraham's old Salieri makeup (in a category that didn't exist when he was hitting his prime, but invented in large part because of his former student, Rick Baker's, amazing work on An American Werewolf In London). 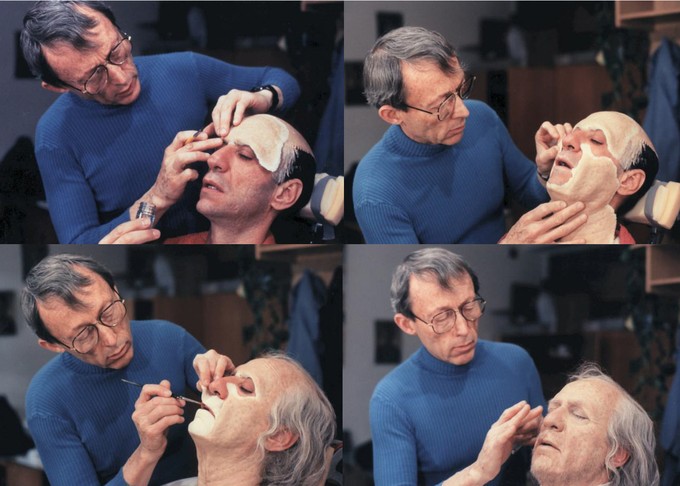 Smith also touched many genre geeks' worlds, not just with his all-time great work on the possessed Regan in The Exorcist, either. He consulted on Scanners (the veins are all his), he built much of the bizarre transformation shit in Altered States, helped effect Jeff Bridges' transformation in Starman, did some design work on Death Becomes Her and also executed some super creepy work in The Sentinel and Ghost Story, which contains the most famous cut effect of all time. The creepy ghost at the center of the story is much different then originally intended. She was way, way, way more terrifying. Check her out: 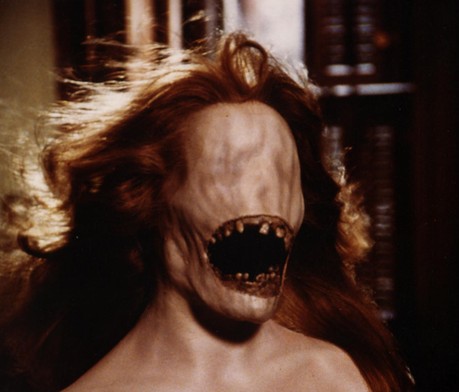 I can't believe you have something that amazing in your movie and you decide against using it. That image floated around the monster mags for years, was whispered about in makeup circles for years. KNB even paid tribute to it in the House on Haunted Hill remake.

If I had to highlight one of Smith's top effects, though, I'd point at something not as flashy as the spinning head of a possessed girl or taking a character from age 20 to age 100. I'd point you at this picture below... see if you can spot his work: 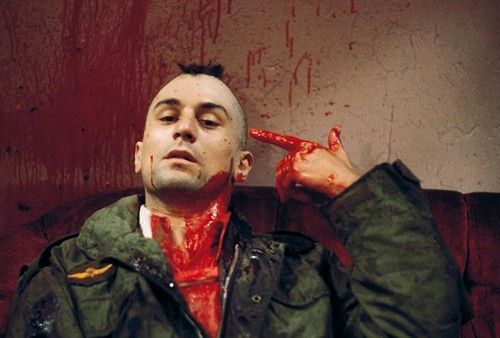 Nope, not the blood... I'm going to put on my best Morpheus voice and say, “What if I told you Robert De Niro never shaved his head in Taxi Driver?” That's a bald cap. The mohawk, stubble on the head... all built. How Dick Smith could hide De Niro's hair underneath there I have no damn idea. Bald caps always look fake. Always. But this one doesn't.

His varied and groundbreaking body of work was only a part of his influence, though. For most people it'd be more than enough to influence the next generation with your work, but Dick went that extra step and invited young imaginations in. He didn't hide his tricks, he shared them, most famously through his Do It Yourself Monster Make-Up Handbook which was distributed by Famous Monsters of Filmland in 1965. 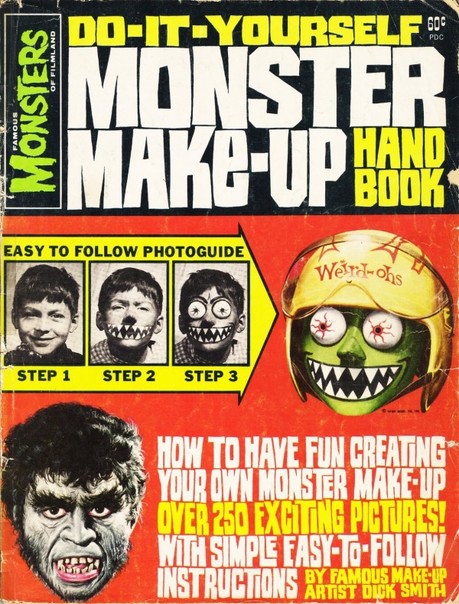 This handbook was later updated and reprinted as its own book in the '80s to inspire a whole new generation of makeup masters, but it was revolutionary in the '60s. Without that original release there's quite a big chance something like Star Wars wouldn't have happened or at least happen in the way that it did. Every young twenty-something makeup man or woman in the late '70s were following along with this book, making their own monsters just like they do in the movies, as kids.

There's no doubt we'd still have practical effects without this book, but for a whole generation of brilliant technicians and artists we admire (Rick Baker, Rob Bottin, etc) this was the “Let There Be Light” moment. Who knows? If Smith's handbook didn't come out when it did Rick Baker might have gone on to be a successful bank manager or something boring.

Not only was Smith influential via his handbook, but he was always willing to welcome young fans into his inner circle, sometimes via apprenticeships and sometimes just as a pen pal. One of those kids who wrote to him was JJ Abrams.

If you ever did read my coverage of the Academy's tribute to Smith 5 years ago, you might remember this, but Smith not only wrote back to his young fan, he also sent him a prop... Linda Blair's demonic tongue prosthetic from The Exorcist. That had a profound effect on Abrams and he told me as such at the event (which I also happened to have attended with Rian Johnson, which either means I'm directing Episode 9 or everything in life is just chaotic coincidence).

That original article is here. Forgive the lack of photos, which got lost in one of the server migrations in the last few years. I dug up some of the lost images on an old harddrive. See below for Smith with Abrams, Holbrook and Baker. 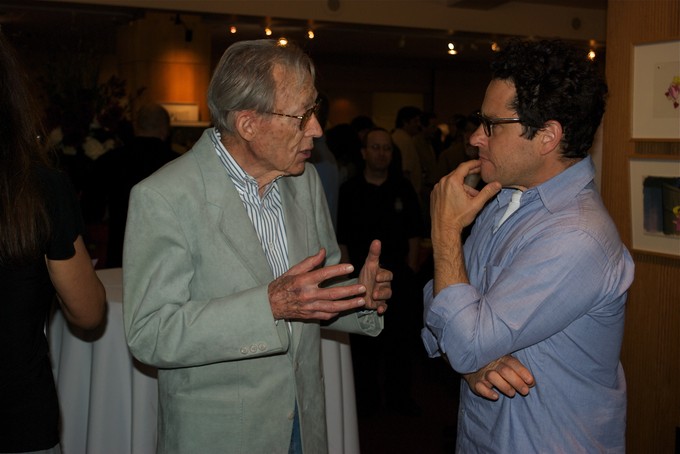 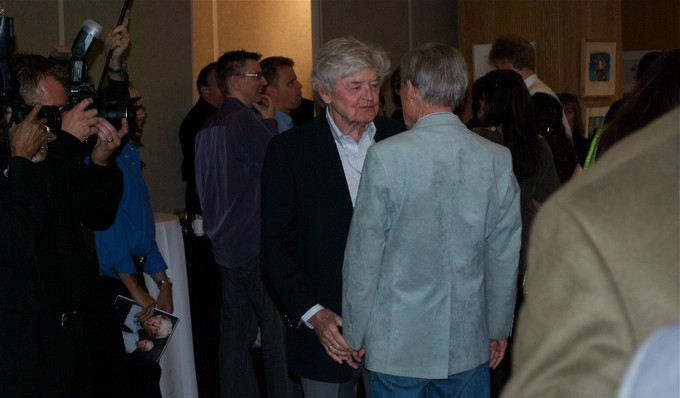 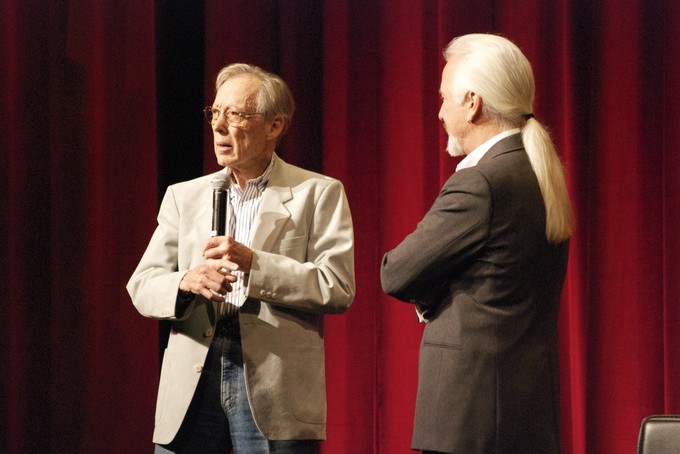 I'll go ahead and end with one more story. Dick had an accident while working early on in his career. His wedding ring got stuck in some kind of machine that literally ripped all the skin off of that finger. It was so bad they had to amputate.

Knowing that his job requires his fingers in actors' faces, he asked the doctors to remove the finger bone all the way down into the hand, so instead of having an obvious stump he'd simply only have three fingers on his left hand. He wasn't thinking about how much more invasive that procedure would be, he was only thinking about the comfort of his actors.

In the below picture you can see him holding his Oscar for the makeup effects in Amadeus (his first Oscar... In 2012, he'd receive an honorary Oscar). He wasn't ashamed of his disfigurement. In fact, he embraced it, calling it his “Mickey hand.” The fact that he's using his “Mickey hand” to hold a symbol rewarding the incalculable impact he had on the motion picture industry says just about everything you need to know about Dick Smith. 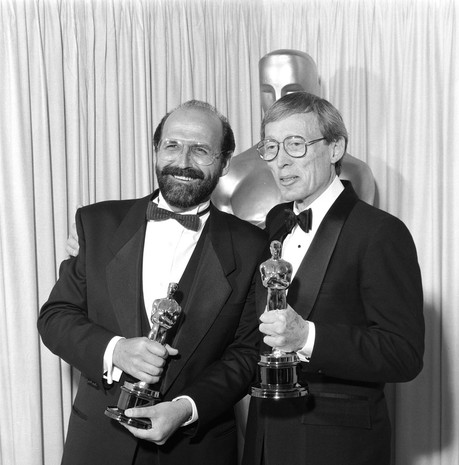 Ninety-Two years is a hell of a run, but Smith's passing marks an end of an era. I don't see the same amount of superstars in the makeup world as there were in the wake of Smith's impact. The predominance of CG is probably to blame. Lord knows we still have some makeup effects Jedis out there at Spectral Motion, Weta, ADI and even ILM (thanks in part to JJ Abrams paying that love of practical effects he learned from Smith forward, I might add). They just need some students.

If you're interested, Dick Smith's website is still up and running. He moved into the digital age very well and there are a ton of tips and how-tos there for all you potential makeup stars of tomorrow. There's also the Stan Winston School of Character Arts. I strongly urge anybody who has a passion for practical effects and the artist urge to make your mark to enroll in either of those two institutions. We need you. And I'm sure nothing would make Smith smile more than helping to push the next Rick Baker or Rob Bottin into being.

I'll leave you now with some photos and videos showing Mr. Smith at work and some of the finished products. My thoughts are with Mr. Smith's friends, family and fans. 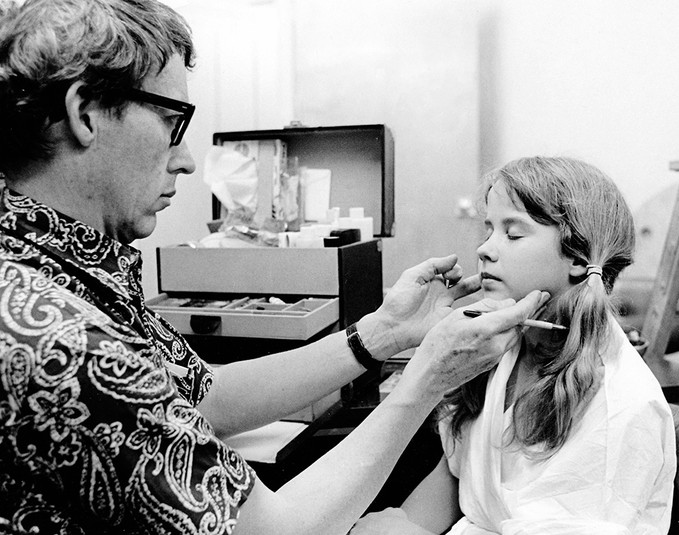 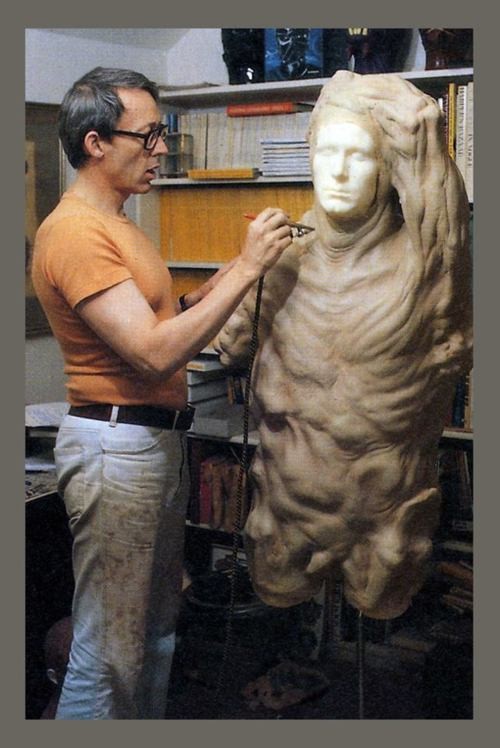 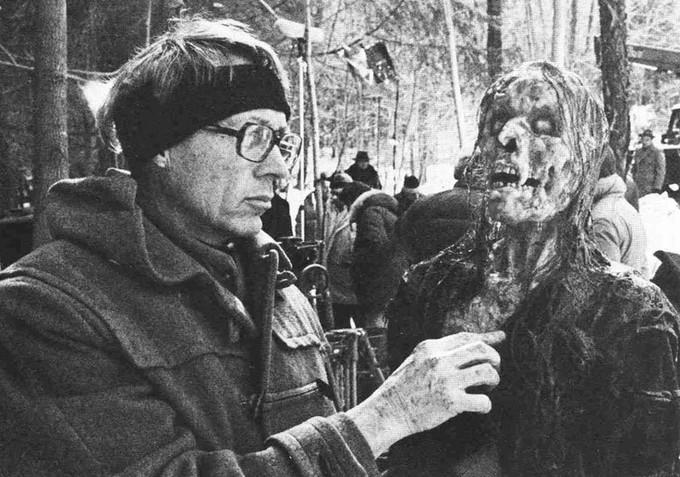 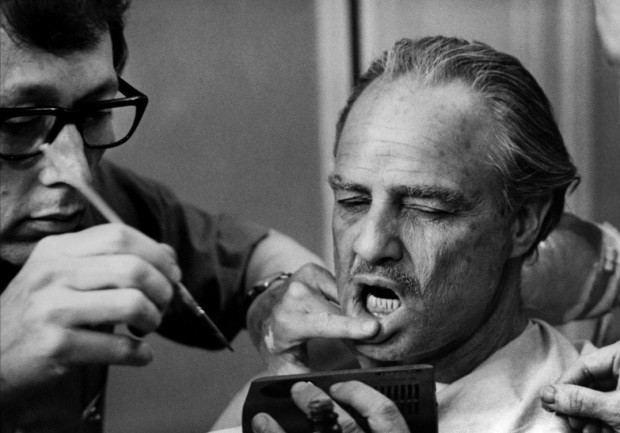