Ahoy, squirts! Quint here. I've still got a few panels to catch up on, but it's almost 4am here and I'm falling asleep at the keyboard, so I'm going to get this piece done and fall into the mini-coma my body is close to forcing on me. 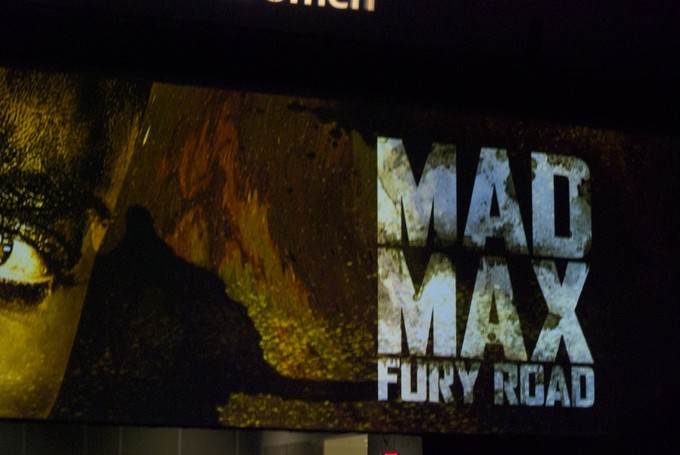 Of all the announced films at Comic-Con this year, the one I was most dying to see something from was George Miller's Mad Max: Fury Road. After years of false starts, stops, reshoots, re-reshoots and even more re-re-reshoots I had to get my eyes on some moving footage from this thing.

Did George Miller still have it or would this be an old man's movie? Would he still have the verve of that hungry young filmmaker or would he be happy to tell his story in a green box with CG explosions?

More importantly, would it feel like Mad Max or a pale echo of a greater era of action filmmaking?

I'm pleased to say that the rather significant amount of footage screened at Comic-Con was Mad Max through and through. High speed vehicle on vehicle slaughter, crazy punk bad guys and a lone wanderer at the center of a crazy war. All the boxes checked off.

The footage begins in the desert (naturally). Narration tells us that the world is running out of water. There are water wars as well as fuel feuds (I came up with “fuel feuds,” how smart is that?). Camera finds a leather-clad loner standing next to a souped up car, door open and trash spilling out. It's Max.

A small two-headed lizard pops up on a rock behind Max. It's no threat, just a little mutated gecko-sized desert lizard. It skitters across the ground towards Max. Without turning around he stomps it as it tries to run past. In what is possibly the only dialogue we got from Tom Hardy in the whole footage presentation there's a bit of narration that states “My world is fire and blood.”

Max eats the lizard, but his head whips up mid chew, giving us our first view of his face. Something is coming. He dashes into the car, slams the door shut, takes off and a split second later buggies with punks sail over the camera, landing down in front of it, giving Max chase.

We saw glimpses of different characters, including Charlize Theron, who has one steampunk arm, by the way. You don't automatically register it when you see the character poster, but it's unmistakable if you look for it. She's lost an arm and replaced it with a jerry-rigged metal arm. Really cool looking. She's driving a tanker truck amongst a bunch of raider vehicles.

One of the vehicles has Max tied up on the back, in some kind of metal muzzle. Driving him is a bugnuts insane bald, pasty-skinned punk played by Nicholas Hoult. He's being chased by a ton of trucks, jeeps and motorcycles.

They drive into a bright red sandstorm. Those entering put masks or bandanas across their mouths, but continue on. Lightning and dust devils make this a violent environment for a car chase. Hoult slams into one car, sending it into one of the many mini-cyclones... the car is picked up and torn apart in the heavy winds, some of the raiders on board falling brutally to their deaths.

Undeterred, Hoult screams out “What a lovely day!” and begins unplugging hoses, filling the cab with gasoline. Max sees this and struggles to get into the cab and stop this crazy fucker. Hoult lights a flare just as Max gets in and then it cuts to black and we don't know what happened.

Day time, the sandstorm is over. Pieces of wreckage, covered in sand, litter the ground. Out of the sand rises Max. He takes off his metal muzzle, approaches the wreckage and pulls out an unconscious Hoult. Slinging him over his back he starts walking.

Lots of fast cuts show us huge gasoline explosions seen from high, high, high in the sky, caravans of dozens of battle cars and some of our characters, including Hugh Keays-Byrne, who played Toecutter in the first film and now plays a new character called Immortan Joe. You've seen his character poster, I imagine. He's got a creepy breathing apparatus that has teeth painted on it. It's striking, broad and reminded me immediately of Lord Humongous from Road Warrior.

George Miller said he figured since Hugh will wear the mask that covers most of his face he wasn't worried that audiences might recognize him from the first movie.

Anyway, the action was brutal, the raiders, punks, autos and car carnage was so pure Mad Max mayhem that the entire place was electric when the footage ended. It felt not only of the world, but it felt like a young man's film. Epic, weird, dirty and totally cool.

God, I hope the movie lives up to this footage! 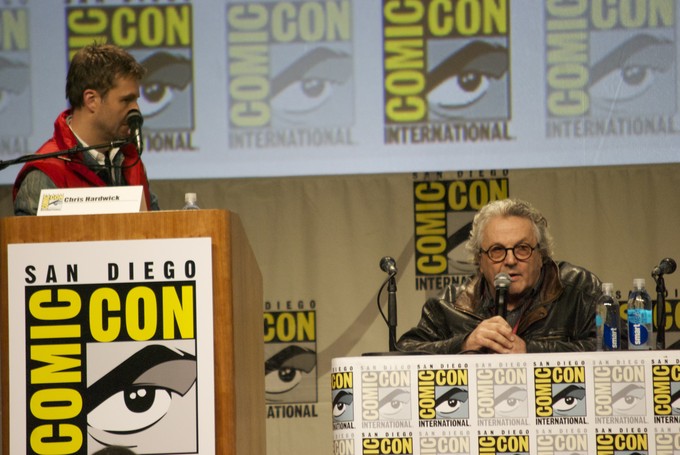 Alright, sleep time. I owe you guys a description of the new Hobbit trailer and a rundown of the cool Legendary presentation, but that'll have to wait until tomorrow. Stay tuned!