SDCC '14: Quint has seen the new Interstellar trailer! Plus The Rock and Spongebob stuff!

Ahoy, squirts! Quint here with my thoughts on the rest of Paramount's panel... mostly I'm gonna talk about the surprise Interstellar portion of the panel, but first let's get some other little tidbits out of the way. 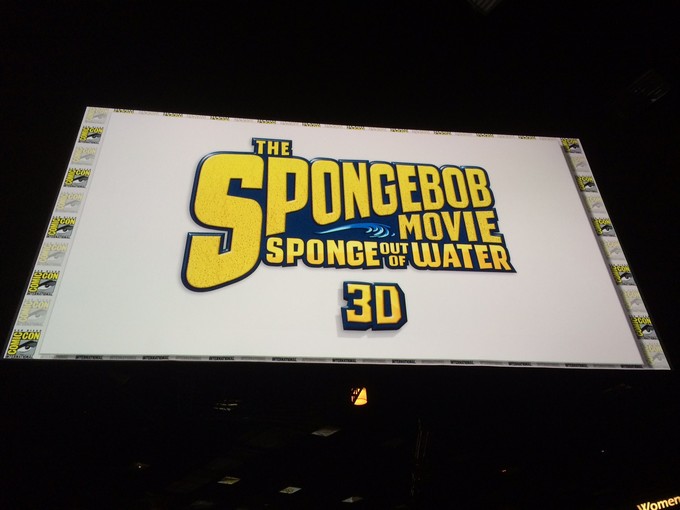 Tom Kenny came out with a lot of enthusiasm, doing his Spongebob voice, but the feeling I got in the room was that people were patiently waiting for this part to end. I'm sure if the audience averaged about 15 years younger this would have gone over huge.

They showed a trailer that had the Spongebob characters having to journey to the surface to retrieve a stolen recipe that has left the undersea kingdom devastated (there was one shot where it went from “What are you we going to do now?” to Mad Max in one quick cut). Of course when they go to the surface they are now CG animated 3D versions of themselves, each with a new superpower.

I'm sorry if I'm being vague, but I don't think I've ever watched one full episode of Spongebob in my life, so I honestly had no idea what was going on. 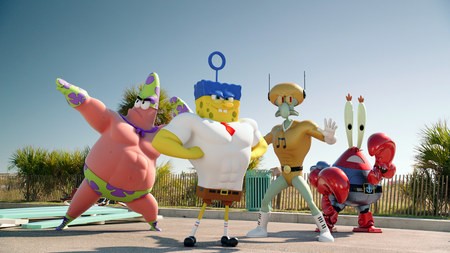 Thankfully for me, that was all to that portion of the panel.

Let's see... oh, yeah. Clark Duke came out to present the Hot Tub Time Machine 2 red band trailer, which you've already seen by now. “In the proud tradition of Terminator 2 and Sister Act 2: Back in the Habit, I present the first footage of Hot Tub Time Machine 2!” I thought it was funny, but I'm a sucker for gross-out humor. I did notice the gymnastic-level editing done to completely extract John Cusack from the trailer... 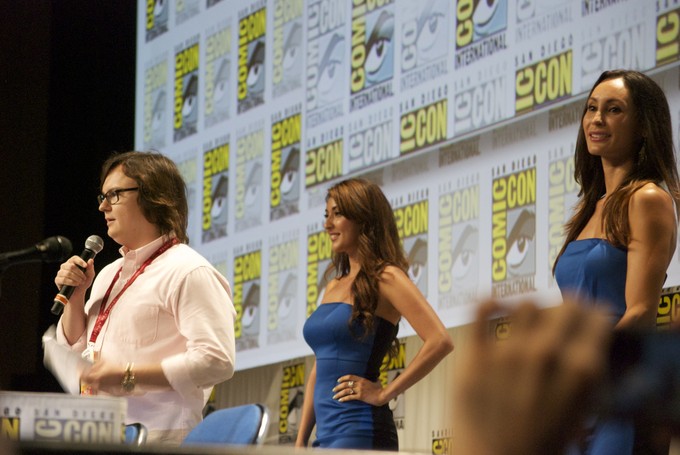 Now let us bask in the glory that is Dwayne Johnson. The audience went nucking futs when the lights went down and slow, brooding music started playing and the words HERCULES appeared on the screen. Well, I guess technically they went nuts for what they knew must be coming: The Rock. And The Rock not only appeared, but he was walking down the aisles of Hall H and people lost their shit. 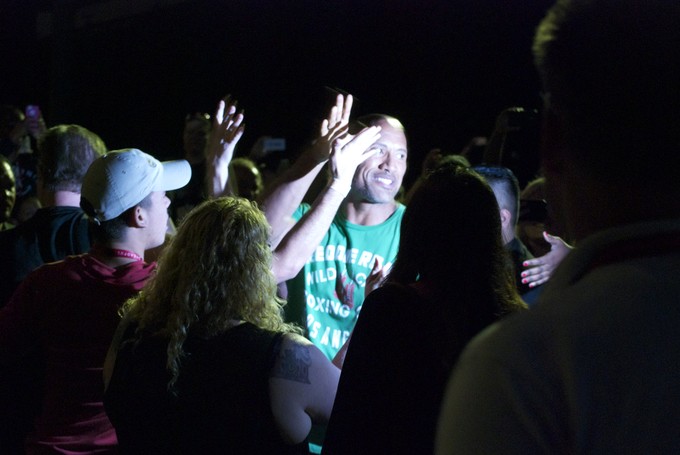 He was in total WWE mode. When he got up on the stage he was even better. This dude is charm wrapped in tanned flesh. He would have been able to sell every single person in that crowd a timeshare if you wanted to. Someone shouted out “Shazam!” and he stopped what he was saying and just smiled, going “Ah! Ah!”

They didn't show anything from Hercules (the movie does come out, like, right now), but he did say he loved his Comic-Con fans so much that he wanted to treat them to the movie, so he bought out 3 theaters that played the movie tonight. Someone shouted out “Free popcorn?” and The Rock shouted back “Don't get greedy now!” 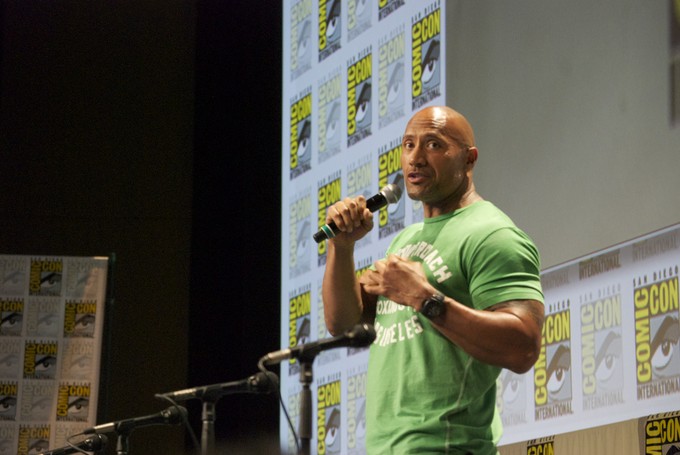 I'd love to see him do a Kevin Smith style “Evening With” at one of these Cons. I would also love for him to be my best friend so he can tell me Osama Bin Laden died before he breaks the news on Twitter and also hang out and play video games and stuff. 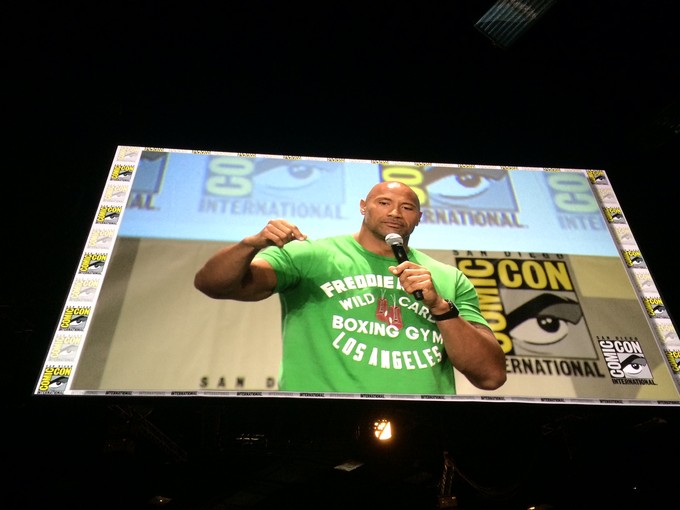 Oh, and someone from the audience asked if he was going to bring his fanny pack to the screening and he got real serious. “You think you funny, don't you?” Then laughed and said that he made it look good! They were referring to this #TBT pic: 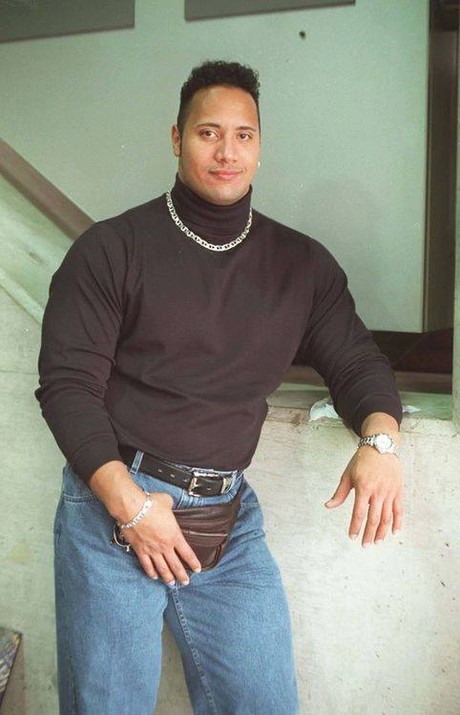 I didn't go to one of those Hercules screenings because... well, because Brett Ratner, really, but I also had some stuff to write up for you guys, including this very article.

That brings us to Interstellar. Between Dwayne Johnson and Matthew McConaughey being on the same stage within 15 minutes of each other really upped the charm quotient of Hall H.

They played the first trailer that we've all seen already, which was a surprise. There was no announcement about Interstellar being on the schedule, so when that trailer played people were psyched.

Then out came McConaughey, his first ever Con appearance. Check out this really sweet, trippy picture Kraken snagged as he came out. Straight off the camera, folks: 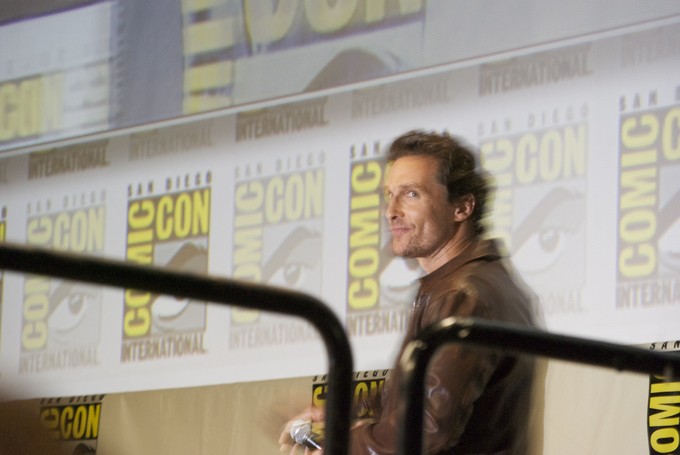 I have a feeling that picture sums up McConaughey better than just about any glamor shot could. Anyway, Matthew was beaming and loose and even did his “Alright, alright, alright” which sent the 7,000 geeks in the crowd roaring yet again.He answered a couple questions about Interstellar before saying that he wasn't the right person to answer any detailed questions... and he brought Christopher Nolan out on stage, his first ever Comic-Con appearance. 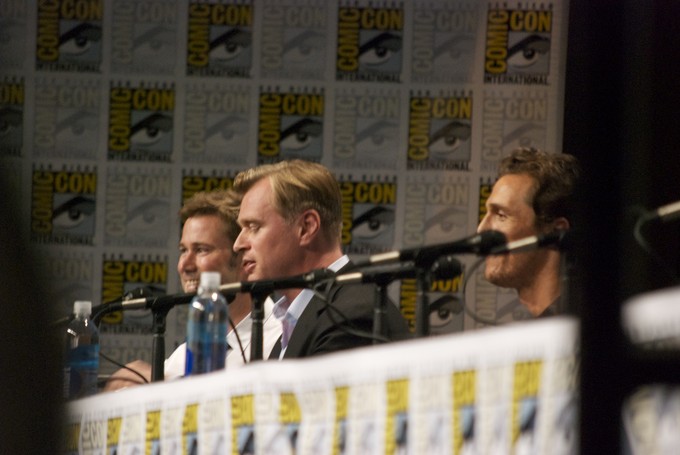 Nolan was gracious and as relaxed as ever. He answered some questions, but I'll get to the panel highlights in a minute. First up let's talk about the new trailer he brought. This is the same trailer you'll get to see sometime in the near future, but we're all super special and got to see it first so ::raspberry::

The new trailer more clearly defines the problems on Earth. Dust storms are becoming common and it's clear living on Earth in the longrun isn't gonna pan out. Michael Caine calls for Matthew McConaughey to join a space expedition to find another habitable planet, but it would require him being gone from his family for decades.

His young daughter doesn't really appreciate that, but it seems he decides to go. There's a launch countdown that plays in the background that serves to ratchet up the tension, leading to the actual launch of the shuttle carrying McConaughey and Anne Hathaway.

I thought that'd be as far as the trailer went, but the whole second half of the trailer is pretty much all space stuff, which had all the scope and majesty of 2001. We saw shots of astronaut Hathaway and McConaughey on different planets with different terrains. We know they find at least one planet with water because there's a quick flash of Hathaway in a strong river while in her space suit screaming out “I'm not going to make it!” cut to McConaughey on the ship responding, “Yes, you are!”

The space stuff was the best... long, poetic shots of the ship cruising past Saturn and then a bunch of unrecognizable new planets.

It's a good tease with just enough info to give us a grasp of the plot without telling us everything that happens. The overall feeling of the film is kind of Tree of Life meets Gravity. I heard someone say it's like a follow-up to Contact, which feels pretty right on, too. The trailer definitely had equal focus on emotional family drama and the awe of the beyond.

-McConaughey said the filmmaking was very fast. Usually no more than 2 or 3 takes before moving on.

-Nolan cites Star Wars and 2001 as being heavy influences, but that he was even more inspired by the air of inevitability that we would be pushing the limits of traveling beyond our galaxy, something sadly missing right now. He's optimistic that we're on the cusp of a new age of space exploration.

-Regarding IMAX, he wanted to use the higher resolution to “paint on a larger canvas. We're trying to show the biggest possible images.”

-Any more film influences for Interstellar? ”I don't want to give too complete a list because when you see the film you'll know what I ripped off. I'm not kidding!” - Chris Nolan

-So inspired by 2001 upon its post-Star Wars re-release that he set out to make a film that has a similar ambition. 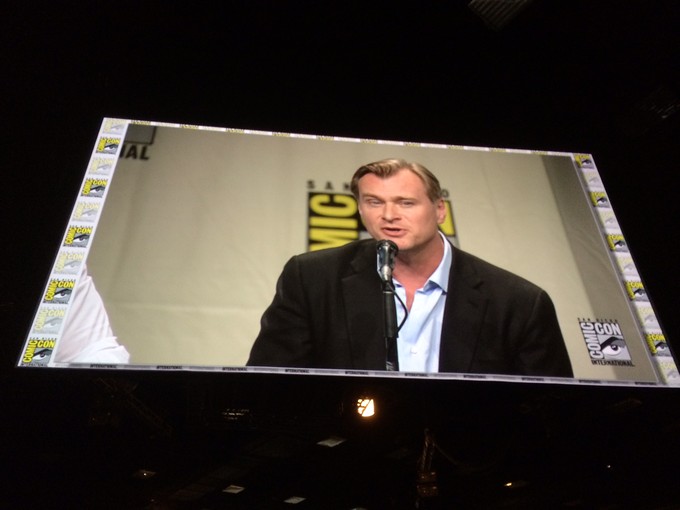 There you go. I'm done for the night! Yay sleep! Tomorrow brings a bunch of interviews and panels on Radius titles, Tusk stuff with Kevin Smith and whatever surprises we get from Fox! Make sure to follow me on Twitter to get instant updates live as they happen at the Con!