AICN HORROR Send in the Clowns: Bug grins from ear to ear thinking of MR. SARDONICUS!

Not a clown, but MR. SARDONICUS is one scary film about someone with a permanent grin on his face. I’ll get into the reasons why, but the clownish deformity that the titular character suffers from is bound to strike some of the same chords of fear in those who have a fear of clowns. 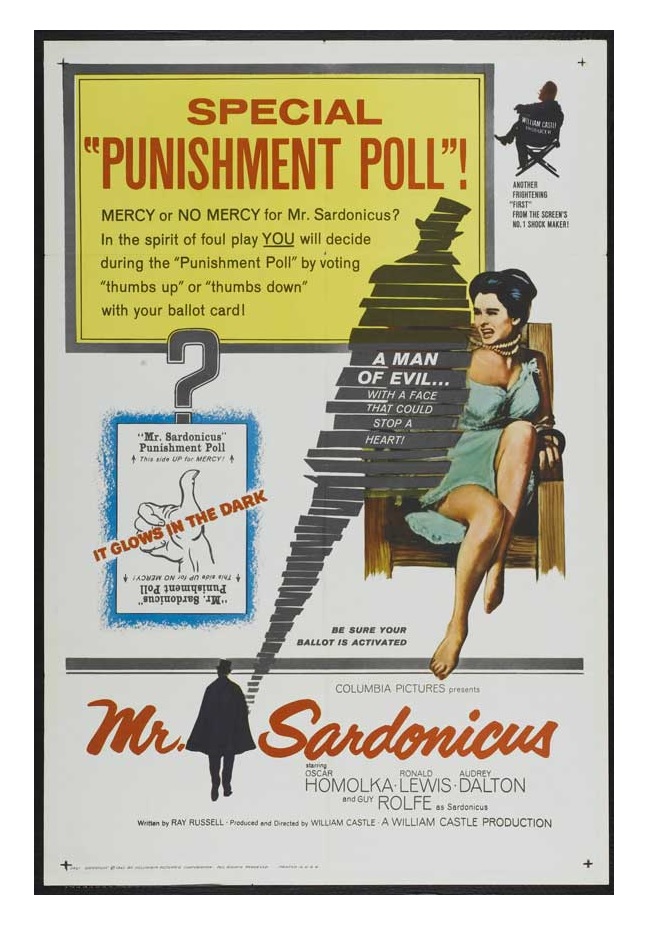 Though it isn’t a clown story, those with Coulrophobia are most likely going to have the same reaction when they gaze upon the grisly puss of MR. SARDONICUS. While not THE favorite (that goes to THE TINGLER—reviewed here), William Castle’s tale of ghoulish madness has always been a favorite of mine as it not only has a terribly black air of whimsy to it, but it also is quite chilling. 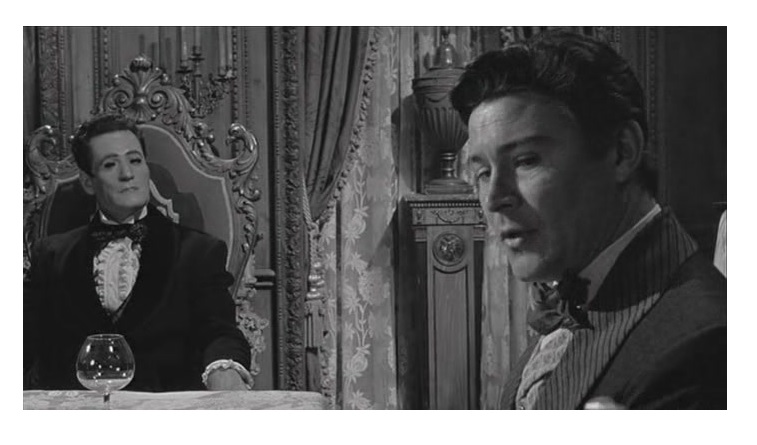 The story follows a young doctor, Sir Robert Cargrave (Ronald Lewis) who is somewhat of a prodigy in the field of medicine as he has developed not only a new technique to massage the skin (WTF?) but also seems to have invented the syringe. These two specialties come in handy as Cargrave gets a letter from the reclusive Mr. Sardonicus (Guy Rolfe), a rich Baron who wears a rubber mask covering a grisly scar caused by an ancient curse that occurred when he becomes a ghoul by desecrating his father’s grave after burial. Sardonicus has heard of Cargrave’s new techniques and wants him to heal his face, which has been pulled back into a wide grimace and sealed shut. By happenstance, Sardonicus has also married Cargrave’s old flame Maude (Audrey Dalton) which is the real draw for Cargrave to come visit the castle. While at the castle, Cargrave realizes that Sardonicus isn’t just disfigured on the outside, but that he is also a twisted and demented soul.

What I love about this film is that instead of zombies, wolfmen, vampires, and ghosts, Castle tries to invent a new kind of monster. While was not first envisioned by Castle, he adds some very cool details such as the pulled back grimacing smile—a terrifying look indeed as a simple mouth prosthetic makes Rolfe’s oval head feel all the more extended and alien. Having the ghoul be a cursed monster, Castle runs the danger of having the audience feel for Sardonicus, but by having the cursed soul treat everyone else in this film like shit sure makes him tough to root for. Even Sardonicus’ man-servant; the one-eyed Krull (Oskar Homolka) seems to loathe his Baron for scarring him and treating him horribly. While the ghoul is often mistaken for a zombie in modern films, it’s fun to see Castle distinguish the creature and give it some distinguishing features of its own. 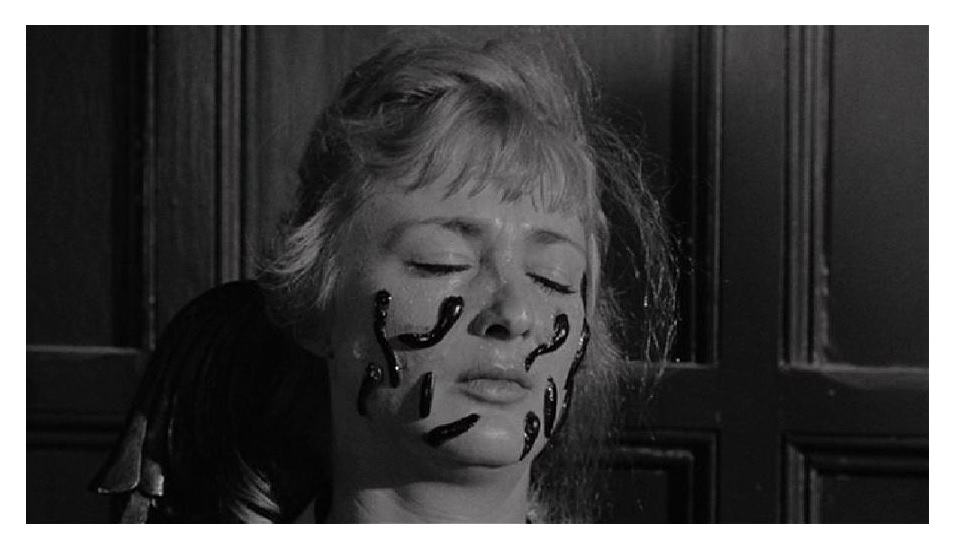 As per usual with Castle’s films, the script is rather goofy with all kinds of weird happenings just for the sake of happening. Sardonicus experiments with leeches for some reason and man-servant Krull seems to take sadistic and not scientific glee in putting them on the face and feet of bound victims. The flashback scene is both terrifying and hilarious as Sardonicus screams like a woman upon seeing his dead father for the first time. Some of Sardonicus’ pontifications are equally funny as he describes how he must “drink the thinnest stews and porridges for sustenance” due to his horrible disfigurement. But as goofy as it is, the ending is rather poetic in many ways with Sardonicus getting his just desserts as well as Krull getting a bit of redemption for all of his suffering.

Fun performances abound in MR. SARDONICUS. Rolfe is fantastic in the role as the titular character; rattling off lines with an heir of arrogance and stiffness. Though I could totally see Vincent Price in the role, Rolfe makes it his own. Oskar Homolka makes his role as Krull the true standout though. With a bit of Peter Lorre creepiness, Homolka plays things nuanced, yet diabolically up to the very end and seems to be having a blast with the character. The other two main players Lewis and Dalton (as Cargrave and Maude, respectively) have less to do but play things straight sharing the scenes with these two monstrous characters, but do a capable job in the roles. 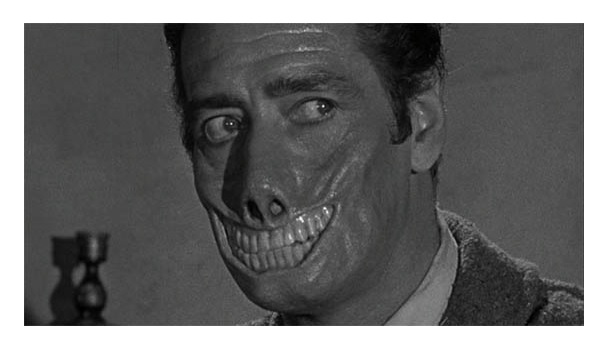 Castle incorporated his usual showmanship to this film by taking a poll close to the end of the film which decided if Sardonicus has paid enough for his sins or if he needed to be punished more. Two endings were filmed; one with a happy ending and one with a more evil ending punishing Sardonicus further. While both endings were made available to theaters, the punishment ending is what always played. Having only seen the punishment ending, I can say it is fun and fitting. The film also has a pitch darkness scene reminiscent of Castle’s THE TINGLER which is equally frightening.

The twisted visage of Mr. Sardonicus is both ridiculous and nightmarish. Like the clown, his face is permanently pulled back and locked into a smile. MR. SARDONICUS may have been made yesars ago, but there’s something about Sardonicus’ look that still gives me chills. With a cool main monster, some hammy yet appropriate performances, and a ridiculous script that somehow works at frightening and causing a nervous titter, the great showman who was Castle succeeded in making MR. SARDONICUS one of his best and one you should definitely check out if you haven’t had the privilege. 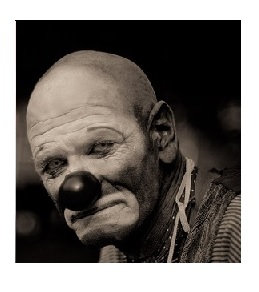