Harry says DAWN OF THE PLANET OF THE APES, like Caesar... RULES ALL!!! Plus Exclusive Poster Debut!

Before I get into my review - we've got a wonderful DAWN OF THE PLANET OF THE APES exclusive to share...   It's <A HREF=http://www.zombieyeti.com target="_">Zombie Yeti</A>'s graphically outstanding poster for this new Ape Epic!!!   My review follows... 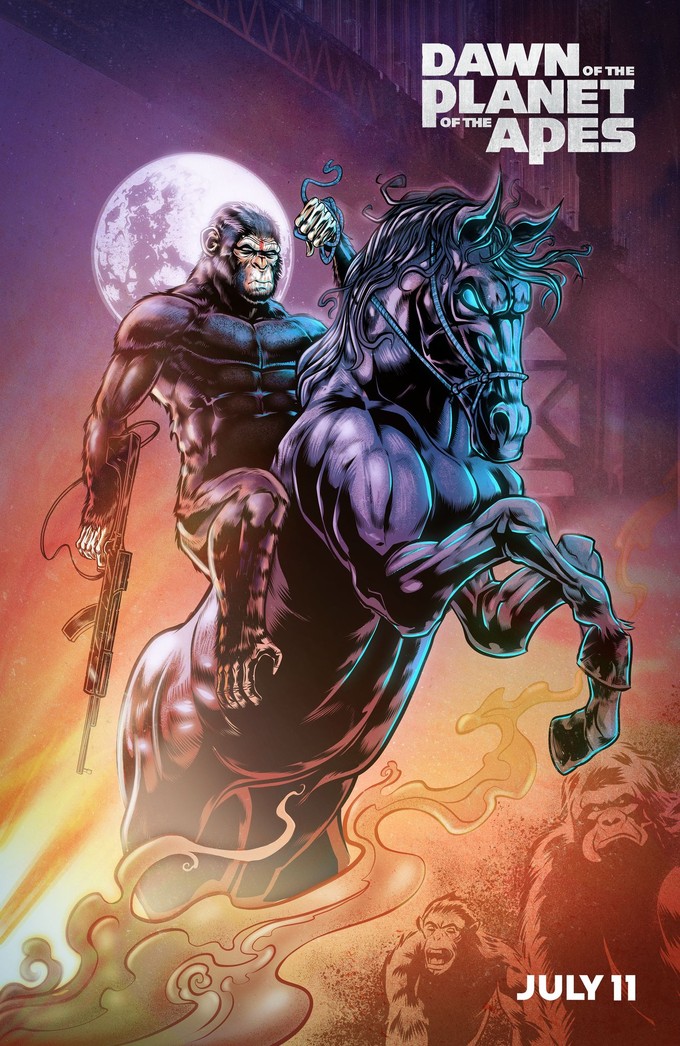 Caesar rule Harry!  - was the predominant thought as I let the Alamo Drafthouse- Lakeline theater, where they hosted an advance screening with Gary Oldman, Andy Serkis and director Matt Reeves in attendance.

I was quite excited to be seeing the film, I have friends out on the West Coast that had already seen it and were already… going ape…  And while I really really enjoyed the hell out of RISE OF THE PLANET OF THE APES… as Quint & I were talking about how this series fits with the original series… I kinda broke it down that I felt I could only really strongly like this new series, while my heart & soul belongs to the John Chambers series of flicks… as for me… Roddy McDowell and Kim Hunter in that Chambers make up… it owns me.  Completely.

Well, that may be changing with DAWN OF THE PLANET OF THE APES….

Matt Reeves has come aboard to direct – and I’ve really loved both CLOVERFIELD and LET ME IN… but without a doubt, this film was on an entirely new scale of whup ass.  Watching this film in such close proximity to Bay’s latest TRANSFORMERS…  I kinda can’t help but want to compare and contrast the filmmaking of enormous VFX Summer Filmmaking that was on display.   The latest TRANSFORMERS is a film about action and the busy body moments that happen in-between, but where Ehren Kruger was paralyzed at the concept of actually giving us some semblence of character with the non-human TRANSFORMERS…  Here…  the movie wallows and relishes at giving the APES something that is absolutely hypnotic and gives you so much to care about… so that when the action comes… you’re holding your breath in anticipation of what will come.  It adds so much to the spectacle…

There’s actually a lot to compare in the two films – as they both follow large scale incidents from prior films… both feature stories about parents & children in incredibly dire situations…  both feature stories where mankind doesn’t trust the special effects rendered characters and vice versa.   The difference is the writing and the execution.

DAWN OF THE PLANET OF THE APES is very much driven by actors working with their director to make every second on screen count.   The trailers make things seem very “Good versus Evil,” but the reality of the film is completely different.

The film opens with a hunt, in which the apes are hunting meat… this alone is frightening when you think about it…  but they use sign language from high up in the trees to coordinate their plan of attack…  Caesar has a son, around the same age he was in the first film.   The scene is stunning.   STUNNING.   We’re learning about Caesar as a leader of a society of intelligent Apes – and the Simian Geek in me was in bananas over it.   We see the little village they’ve made for themselves.  It’s about the first 15 minutes of the movie – and it is so well handled that I found myself hoping we could just live with the Apes and have a story completely about their lives, politics and way of being.   There are Apes here that think of “Man” as something from legend.  It’s been 10 years since they’ve had contact.  But of course, that’s going to change.

Then “Man” shows up and shoots Caesar’s son’s best friend Ash – and well… we have the beginning of something that can’t really be undone.   In the ten years since the first film…  the Simian Flu has swept the world.  Turns out there is a strain of humanity that has a genetic immunity – and they’re beginning to try and reorganize themselves.   Form communities… try to normalize as best they can.   This little expedition was about trying to get the hydroelectric power from a Dam back on so that the lights can come back on in San Francisco.  But – that’s in Ape Country… and well… this ain’t no Disneyland attraction.   I’ve walked in the Red Woods of California quite a few times in my life… and man… Apes with spears… so much scarier than Ewoks with spears.   The ape village… it’s very cool looking – and it’d be cool to sharpen some Lincoln Logs and create a great Ape habitat for the toys… I was seriously looking at old family slides from those trips – and well… the Apes have done such a good job of living with nature in the woods – that I was wildly upon their sides instantly.

You know… Man had their chance… they fucked it up… it is the Apes’ turn and Caesar seems to have worked out a pretty good rule of society.   Some of the basic Ape laws have been written.  They have an education system beginning…   And the older Apes that live there mainly have terrible memories of Man.   I mean, think about the last film.   It was made up of Apes from a Zoo, Medical Experiments and essentially Ape jail with asshole guards/caretakers.  There are very negative feelings about humans.

Then you have MAN…  the thing that pretty much wiped out civilization as we now know it was called… SIMIAN FLU.  Everybody lost pretty much everyone they ever knew.   We’re talking death on a scale that none of us ever want to contemplate living through.   Most folks are woefully ill-prepared to survive in these times – and leaders have risen to care for the survivors.   This is where we meet Jason Clarke (ZERO DARK THIRTY) as Malcolm.  His son is played by the great young actor, Kodi Smit-McPhee…  the kid from THE ROAD, Matt Reeves’ own LET ME IN, PARANORMAN and the great film THE CONGRESS…   This kid isn’t put into the film with the express purposes of being LEERED at, he’s there to emote, to connect with the incredible reality that Matt Reeves is giving us.

Let’s answer a basic question, “Is DAWN better than RISE?” – YES!  Don’t get me wrong, I enjoy the living hell out of RISE, but at the same time… I don’t always need character origin stories.   I mean, it’s cute as hell to see lil Caesar and James Franco and John Lithgow at home… it fed every “I WANT A MONKEY” fantasy I have.   There wasn’t a single poo-flinging scene!  They went the high brow route – and it wasn’t like any “-OF THE APES” flicks I’d ever seen before.   So much of that film was tight on Caesar in enclosed environments.   Here… fucking balls out man…  this is APES in the wild building a civilization.    These Apes are thinking thoughts no ape has ever been able to articulate before – and it is god damn electrifying.

Is this just a retread of BATTLE FOR THE PLANET OF THE APES?  No.  In that classic “Of The Apes” – Apekind was in a subservient relationship with Humankind.  Butlers, Cooks…  Apes had become the slave-class of mankind.   If anything…  this is the story of the first serious confrontation between an evolved Ape civilization and the surviving remnant of a mankind that’s just trying to put the pieces of our civilization back together.   You will root for both sides.   You don’t want conflict to come…  we don’t want war.   We want peaceful co-existence.   At least I did…  but when we’re dealing with the harsh reality of this “Of The Apes” iteration… there’s always going to be that initial incident – and with this being the 100th anniversary of the assassination of Archduke Ferdinand…  we can all see how this conflict will begin.

How does it end?  I don’t think “ENDING” is a high priority as this really is the “DAWN” for the series…  The sun is indeed rising upon a new world.  This series is in incredibly assured hands with Matt Reeves.   He allows the film to be a showcase for the very best performance led visual effects – and Andy Serkis’ team working perfectly with the army of visual effects wizards at Weta and beyond…. Well, it is extraordinary work.  At no point do I think about the how…  the reality of leotard actors with cameras attached to their faces and months of rendering, tweaking and polishing.   The results are flawless.   I watch and am just happy to let the monkeys tell me their tale.

Truly amazing wizardry is at play.   This is what a summer blockbuster looks like when a filmmaker really cares about every nuance of his craft.   It isn’t just about the images that are put on screen, but the soul beneath it all.   DAWN OF THE PLANET OF THE APES has a beautiful noble soul at its center…   In this film it belongs to Andy Serkis and Jason Clarke…  they’re trying to be better than the situations their characters are wrestling with.   They weigh the cost of war in the only way that matters… the lives of those War touches.

It is amazing.  There’s more compassion and love for life in this film than in our own Government.  But the drums beat on…  I fear it’s only going to become more violent from here.   Do not miss this movie.  It is great from every performance to the vfx to Michael Giacchino’s fantastic score!   Fox has really done a great job with this franchise.   I, for one, am dying for the next chapter…  after this ending, it really really can’t come soon enough!

I would also love a separate film where Maurice uses Charles Burns’ BLACK HOLE to deconstruct the flaws of humanity!  It’d be about the most beautiful 2 hour monologue movie ever made.  Giggle.