It’s been a while since I saw THE DEVIL’S CARNIVAL in theaters. Director Darren Lynn Bousman and writer Terrance Zdunich were taking the show on tour, making an event out of the film and distributing it themselves. At the time, the film wasn’t completely finished, but was still a fun time. Here’s hoping the next chapter of THE DEVIL’S CARNIVAL comes soon. The film fits nicely into this clown horror column as it features quite a few scary clowns; specifically one song and dance performed by Five Finger Death Punch’s Ivan L. Moody dressed as a creepy hobo clown. You can purchase all sorts of stuff from the film’s website, including a copy of the film! Here’s more on THE DEVIL’S CARNIVAL! 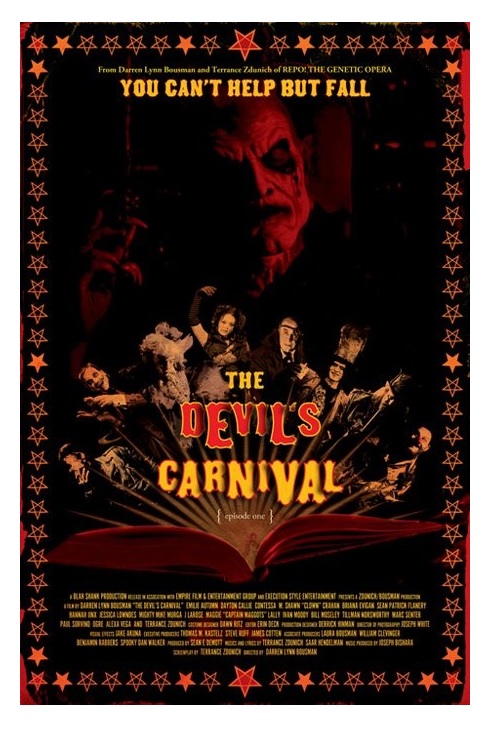 The team behind REPO!: THE GENETIC OPERA, Darren Lynn Bousman and Terrance Zdunich come together again to bring us THE DEVIL’S CARNIVAL, a twisted little anthology of sorts about a trio of people whisked away at the time of their impending deaths to look back on their lives in a place where madness, mayhem, and song are the three course meal of the day. The trio in question, Sean Patrick Flannery (BOONDOCK SAINTS), Briana Evigan (STEP UP 2) and Jessica Lowndes (90210) each have committed some sort of dastardly deed before arriving at the infernal carnival and are sentenced to face themselves through a warped mirror. Bousman and Zdunich cast this story against the backdrop of Aesop’s Fables morality tales, particularly “The Dog and His Reflection”, “The Scorpion and the Frog”, and “The Devil’s Bargain”. In each tale, the characters must face what brought them to the carnival as well as accept their fates. 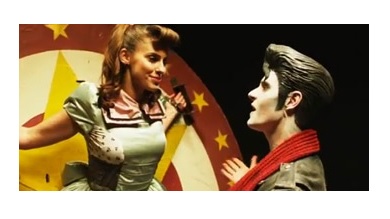 The story is a fun one and occasionally, it is quite gripping. All three of the main characters do a great job with their performances not only acting, but singing as well. Though the tales are somewhat simplistic, so are the fables they are based upon. In every one, there is a wrong doing and a price paid for it. My favorite being the first tale of a money grubbing woman (played by Briana Evigan) who desires a giant diamond only to throw away all of the riches she has in order to attain it. A simple tale, but effective.

This being a musical horror film, songs permeate the entirety of it (you can sample each song here). Unlike Vincent D’Onofrio’s flaccid attempt at a horror musical with DON’T GO IN THE WOODS, this is a straight up musical where characters burst into song, emoting feelings and sounding out emotions and thoughts for all to hear. Having seen both REPO! and THE DEVIL’S CARNIVAL, I think I prefer THE DEVIL’S CARNIVAL in terms of soundtrack. Here the songs feel stronger and they are definitely catchier. With the setting being a carnival, many of the songs have a frantic kaleidoscope-Elfman vibe, but with a much more devious slant. While songs like “666” offer a decadent feel and “The Devil’s Carnival” feels like you are riding a rollercoaster off the rails, the more somber and slower songs such as the duet between Terrance Zdunich’s Lucifer and Jessica Lowndes called “In All My Dreams I Drown” and “A Penny For a Tale” sung by Five Finger Death Punch’s Ivan L. Moody were more to my liking. I also dug Marc Senter’s Scorpion singing “Trust Me” while tossing daggers at his intended prey Jessica Lowndes who is strapped to a spinning wheel. Occasionally, though at the beginning of the film, some of the more important lyrics are drowned out by the carnival noises. This becomes less of a problem later in the film as the songs move from the entire cast singing to just a few. 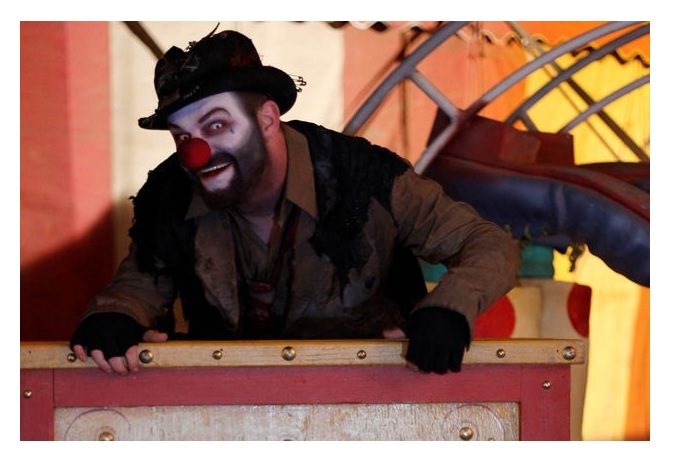 My favorite performance of the film has to be Ivan L. Moody’s “A Penny For a Tale”. All dressed up as a Hobo Clown, Moody evokes a Chaplin vibe while singing with his based-out voice. It’s a haunting song that resonates because of the lower pitch of the singer and the twisted words and intentions behind it.

Zdunich also does a great job as Lucifer. The full face and hands devil make-up is top notch and though it resembles many representations of the horned one, Zdunich brings a special kind of evil to the role. His movements are very dramatic and may seem more likely to be seen in a stage play, but the larger than life feel Zdunich brings to the character is worth mentioning.

There are moments of unevenness here. The film clocks in at just about an hour, making the experience a brief one. Towards the end, there’s a plot twist about the carnival storming the gates of heaven and Bousman revealed at the show that he intends THE DEVIL’S CARNIVAL to be the first of a trilogy, fitting together the three into one epic and operatic horror musical masterpiece. This decision to include mention of the upcoming battle between the infernal and the holy seems a bit of an afterthought as the rest of the film focuses on the plights of the three brought to the carnival to be judged. I would have liked to see this transition of direction be a bit more fluid, mentioned earlier in the film or not at all. 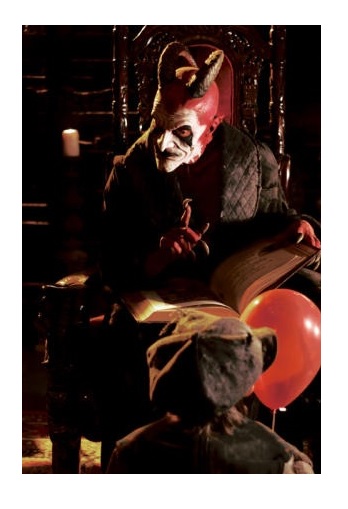 Another nit to pick is that arguably the best song of the film “In All the Dreams I Drown” is shoe horned in during the end credits and really doesn’t have a lot to do with the rest of the film. The song is a strong one and the performances between Zdunich and Lowndes are both great, but the fact that Lowndes character met her fate earlier in the film makes this end video seem out of place in the context of the story. Again, it’s a strong song, but just seems like it’s better fitted into the narrative of another story or possibly a future tale set in THE DEVIL’S CARNIVAL.

Criticism aside, I applaud Bousman and Zdunich for having the balls to buck the system and take this film out on the road. I saw it last week at The Music Box in Chicago and it performed to a packed theater of rowdy fans singing along with the music and hooting and hollering throughout the entire show. With a sideshow act and costume contest opening the evening, along with an intimate Q&A with Zdunich and Bousman, the entire night was a damn cool experience to sit through—more like a concert than going to a film.

Not all will be into this sort of thing. The friend I went with hates musicals and disliked this film the same. But personally, I go to films because I want to see something different and different is definitely what I got with THE DEVIL’S CARNIVAL. Bousman does know how to deliver vivid imagery and that twisted and dirty feel one gets while walking though the straw lined carnie walkway. Made on a low budget, Bousman makes the best with what he has, relying on solid camerawork and lighting to cover the seams. With a soundtrack from Zdunich that encapsulates darkness and delirium often attributed to circus spectacle and a travelling sideshow atmosphere these appearances seem to exude, THE DEVIL’S CARNIVAL was definitely a fun time and worth checking out if it comes through your town. 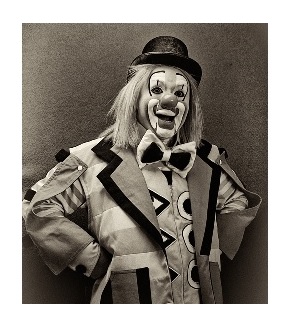