Quint gets on a train with director Bong Joon-ho and talks all things Snowpiercer!

Ahoy, squirts! Quint here. The Alamo Drafthouse recently held a special screening of Snowpiercer that all 400+ attending had to get to via train. You know, typical awesome movie experiences from that team. On that train they served sushi to special cabin and the rest of the cars got nasty protein bars. I had been fortunate enough to have seen the movie before the train ride, so I knew the reaction those poor protein bar eaters were going to have about 40 minutes into the movie.

Anyway, besides the sushi one of the perks of being admitted to the super awesome exclusive car was that I got a chance to sit down with director Bong Joon-ho and talk about the appeal of post-apocalyptic movies, how different his adaptation was from the original graphic novel, how awesome Tilda Swinton is and we even got to geek out over Jaws.

It's a fun chat. Hope you guys enjoy it. I'll have a full review of the film hitting later tonight, but this should hold you over. 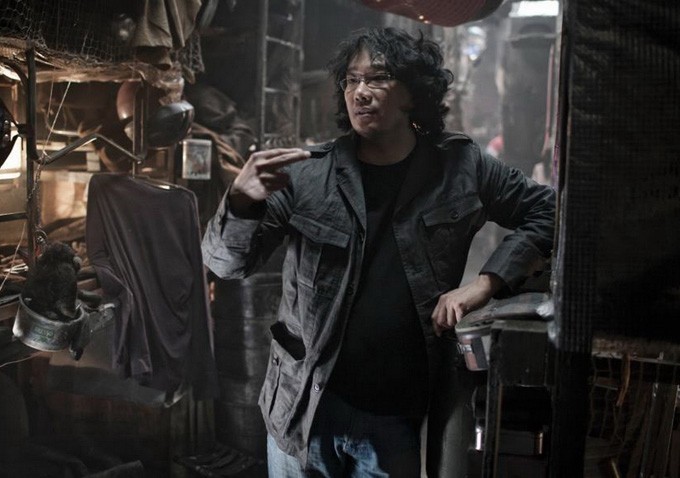 Quint: I'd like to start with the post-apocalyptic setting of your movie and what you find appealing about being able to tell a story in that very specific sub-genre. It always seems like there's a huge fanbase for post-apocalyptic stories, but we don't get to see too many of them made into films.

Bong Joon-ho: This genre really gives you a chance to show how people live and you can describe an era. That's what's interesting about the genre. Maybe it's not quite a post-apocalyptic genre film, but George Lucas' THX-1138 is a good example. It was an inspiration to me, especially the moment where Robert Duvall escapes at the end. You have a chance to make a new world and show a new world and here the world is inside a train.

Quint: I really liked how the classes broke down. Anybody who has ever traveled anywhere will instinctively understand the breakdown between economy/coach class, business and first. It's an easy shorthand to show class divides in your story.

Bong Joon-ho: The idea of class separation was used in the original graphic novel and that was a really genius idea because we can relate to it immediately. First class, Sky Priority, things like that. It's something you can relate to easily. Especially on a train because the sections are divided. The actual cars are joined together. You can show the differentiation.

Quint: I wasn't familiar with the graphic novel when I saw the movie. How closely did you consult it when you were writing the script? 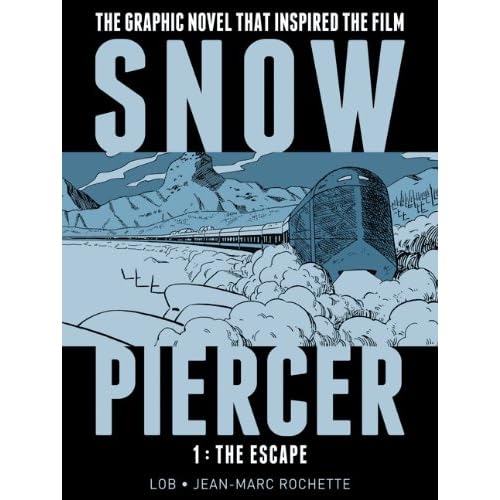 Bong Joon-ho: It was recently published in America, so you should definitely check it out. The main concept I took was survivors on a moving train, the poor in the back and the rich in the front. Everything else is different. It took me a year to adapt the material. The Jamie Bell character, the Tilda Swinton character and the character Chris Evans plays are not in the original graphic novel.

Quint: That's very interesting to me. Tilda Swinton is one of my favorite things in the movie! She's so good in the movie! The reason she works is because you allow her to go very broad with the character, a decision I think many filmmakers might have been scared to make. I guess my question is: Do you have any fear as a director? It doesn't seem like you do.

Bong Joon-ho: The setting itself, people surviving on a train, is such an extreme idea, so I felt like having a character like this wouldn't be out of place. Mason is kind of a fake person, a snob, and I talked to Tilda about Mason being Wilford's clown or jester. They do exaggerated things. They put on makeup and try to entertain their superiors. She's always name-dropping Wilford. You can perhaps see her as the worst kind of politician, but also at the same time there's a cute side to Mason. 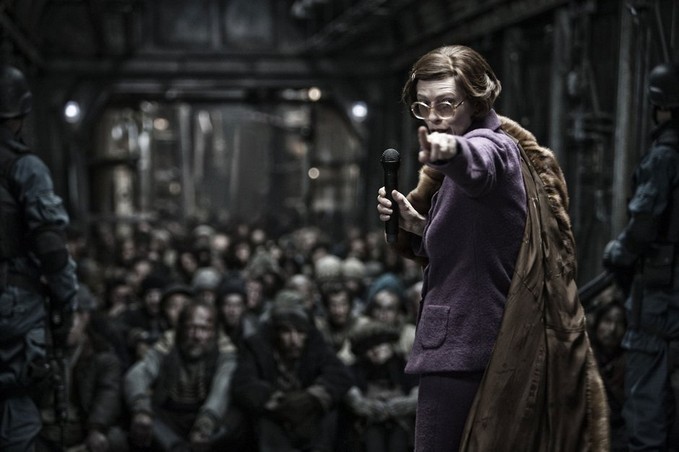 Quint: She seems like a survivor. It's clear she'll do anything to get through the revolt, but I noticed you gave her that hand motion during the “everything and everyone in their place” speech that is mirrored at the end. I could be wrong, but I thought that implied she may have worked her way into her current position.

Bong Joon-ho: That's actually a good observation. I talked to Tilda about her character and I thought when she boarded the train she was probably in a lower class, but at some point caught the eye of Wilford and she climbed up into the Minister post. Maybe she was a cleaning lady when she first got on.

Quint: Chris Evans leads your movie and he's so great. There's a danger with a character like this that you'll end up being one-dimensional good guy, but he plays it so haunted and desperate that he makes it something new. Much of that comes from the monologue he has towards the end of the movie. Can you talk a little about painting your main character in shades of gray and what Chris brought to what was on the page?

Bong Joon-ho: In basic terms, he's a tragic character. He has a self-loathing aspect to him. He hates himself. He cannot overcome his past. Physically he keeps moving forward on the train, but mentally and psychologically he's stuck in the tail section. He's stuck 17 years in the past. Simply speaking, he's a very dark hero. He's a very sad guy and it all comes out in the confession, which was a two page monologue. He pours everything out. I wanted to shoot it in a very classical way, not cut to flashbacks or anything. Just stay on Chris. He really got into the scene, worked really hard for it and it came out great. When we were in Prague we watched the famous Robert Shaw monologue from Jaws together. 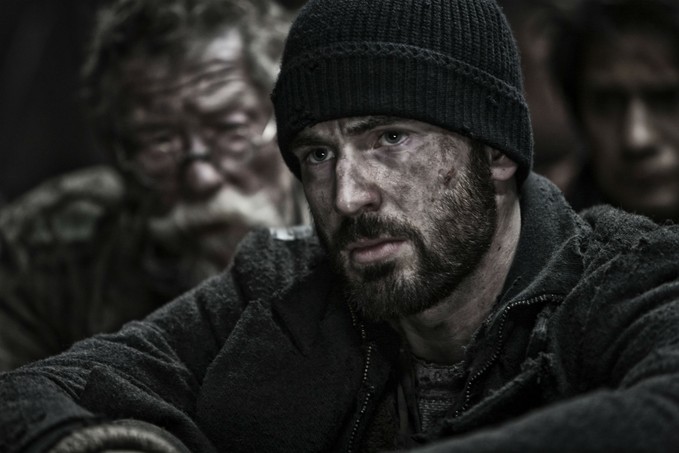 Quint: Well, you just said the magic words. Jaws is my favorite movie.

Bong Joon-ho: Me, too. One of the best of Spielberg's movies.

Quint: I work for a site called Ain't It Cool News and we all kind of took pen names at the beginning and I chose Quint because he's my favorite character in my favorite movie.

Quint: It shouldn't be a surprise to me that you love Jaws. The Host is very much in that tone and spirit.

Bong Joon-ho: It was very inspirational.

Quint: His visual storytelling in Jaws is second to none. I could entertain people liking his other movies more, but he's so hungry and out to prove himself in Jaws that I'm blown away every single time I rewatch the movie.

Bong Joon-ho: (points out the train's window at the rolling Texas country) The Sugarland Express.

Bong Joon-ho: I want to see it again now that I've been here!

Bong Joon-ho: My son is really into video games. I watch him play. My son is really into Grand Theft Auto right now and he uses it on the big projection system at the house. I have to wait to watch movies because my son is on it! I can't watch movies! But the graphics, the movement, is amazing. I get into it and watch him play because it's so real.

Quint: I have a recommendation then, especially since seeing Snowpiercer... one of my all time favorites is a post-apocalyptic game called Fallout 3. Since you brought so much weird humor to this movie I think you'd enjoy this game. Very similar in terms crazy characters in a dire setting. The Alison Pill character in particular reminds me of someone you might come across in that game.

Bong Joon-ho: I'll ask my son about it! In Korea and also here a lot of people compare the movie to Bioshock.

Quint: The end of the movie has some similarities to Bioshock, sure.

Bong Joon-ho: What kind of game is it? I don't know anything about it.

Quint: It's about an underwater city that was built by an Ayn Randian industrialist. Very art deco designs. Genetic splicing was experimented with and things go poorly. The guy who runs the city, Andrew Ryan, shares a lot in common with your big bad guy, Wilford, so I'm not surprised people are comparing the two.

Bong Joon-ho: So people are trying to escape this city?

Quint: Ultimately, yes. Someone is kind of called down to it from the surface. You think it's random chance at first, but you realize as you go along that the character you play has been specifically brought to Rapture. Gore Verbinski tried to make it into a movie, but it fell apart.

Bong Joon-ho: Because of Lone Ranger?

Quint: No, he did Lone Ranger when Bioshock didn't happen. It was just too expensive. He wanted all practical sets and when your movie is set almost entirely in an underwater city that gets to be pretty pricey.

Quint: It's a great game. Add that to the list of stuff to get your son to play for you! So, what's next for you? What are you working on right now?

Bong Joon-ho: I'm working on two scripts right now. I can't really go into too much detail, but one is going to be shot in Korea and the US. The other one is a Korean story... a strange story, a smaller kind of film. Something weird.

Quint: Good! That's what we like! The weirder the better! Just make sure that when you're done with it you come back to Austin and screen it!

Bong Joon-ho: It's my first time here. I haven't seen much, but I'm remembering movies that have been shot in Texas. Paris, Texas. No Country For Old Men.

Quint: Yep, literally in this county. You're very close to where they shot that film. Before I go, I'd like to close with getting your impressions of working on an English language film and if you'd be open to doing so again.

Bong Joon-ho: It really comes down to the story. It's not like I say “I'm going to make a Korean film” or “I'm going to make a movie in English.” It's really the image and the story that drives the decision. I can shoot a movie in Japan or the US. It doesn't matter. For Snowpiercer we had many great translators and also our actors were very supportive of my handling of the dialogue. Also, the co-writer is Kelly Masterson. With that support, the language doesn't matter, I think.

Quint: Thank you so much for your time. 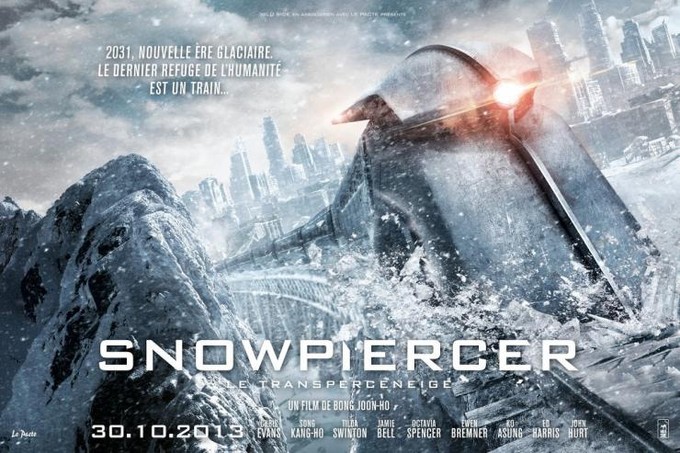 I ended up telling Bong Joon-ho that he really needs to make a trip to Martha's Vineyard because time has not changed that place one iota. It still looks like Amity! It's like walking around the set of one of the best movies of all time.

Had a fun time with this one and I hope you guys enjoyed the chat.