Prior to coming up with this series of columns, I hadn’t seen VULGAR, but heard quite a bit about it. Anyone who has seen a Kevin Smith movie is familiar with the weird little animation of Vulgar the Clown. After seeing it, I believe it deserves a place here in this tribute to clown horror on the silver screen. Below are my thoughts about the film. 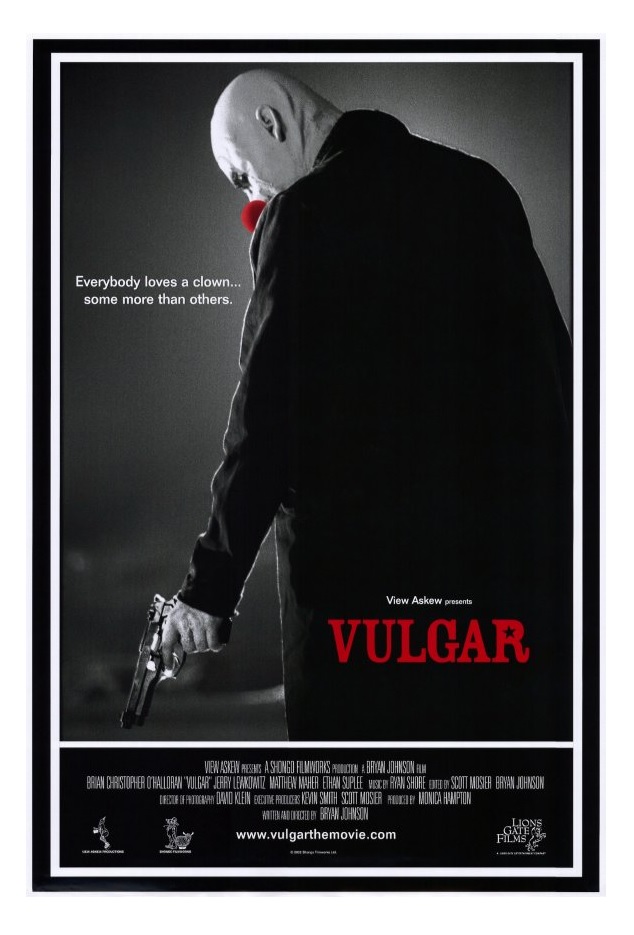 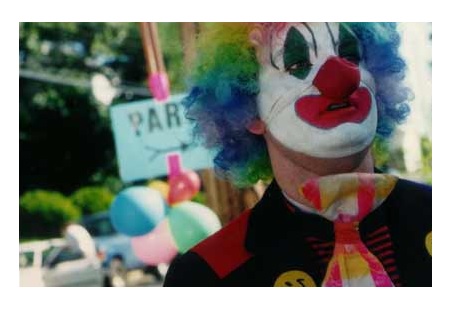 Playing like a long lost grindhouse flick, VULGAR is a cross between SHAKES THE CLOWN, ROLLING THUNDER, and MS. 45 as CLERKS’ Brian O’Halloran plays Will Carson, a down and out nice guy who makes his money dressing up as a clown named Flappy for children’s parties. Looking for a way to make some quick cash to pay bills and help out his invalid mother in an old folks home, Will comes up with the bright idea of dressing in lingerie for bachelor parties as a gag to prepare the bachelor for the real stripper (I’ve heard of worse ideas…like the plot for COP OUT—I keed, I keed). The idea goes south quick as his first paying gig as Vulgar the Clown results in him being gang-raped by three psychopaths (Jerry Lewkowitz, MY NAME IS EARL’s Ethan Suplee, and GONE BABY GONE’s Matthew Maher). Will has a crisis of sorts, going through a bout with depression, but his good nature gets him into Flappy costume again and through a series of bizarre events, he becomes a hot commodity as he rescues a young girl from her deranged, gun toting father. The talk of the town, Will believes his problems are over until the three psychopaths from that fateful night recognize Flappy on his TV show and demand a second round of clown raping. But this time, Flappy or should I say, Vulgar, is ready for them. 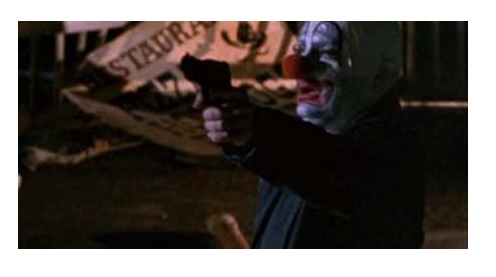 While there are comic elements to this film, for the most part, this is a pretty dire film. The horrible events of that fateful night when Will is raped is not played for laughs at all. In fact, I was impressed by the mature hand in the way the subject of rape is dealt with in this film. Much like MS. 45, I SPIT ON YOUR GRAVE, and LAST HOUSE ON THE LEFT, Will is utterly destroyed by this rape and reborn into a creature driven by vengeance. While in those films, the raped goes on a bloody rampage, Will behaves in a more realistic fashion; dealing with guilt, sadness, anger, and a horrible feeling that somehow he made this thing happen. The fact that this subject matter is approached in this way made me impressed with director/writer/COMIC BOOK MEN star Bryan Johnson handles the material and wonder what would have happened had Johnson ever been given another film to work with. In many ways, Johnson handles this material in a matter that is much more mature than anything producer Kevin Smith has touched. Johnson gets the best performance I’ve ever seen from O’Halloran who was always hit and miss for me as Dante in the CLERKS films.

There’s even a sense of poetic karma to the revenge Flappy/Will/Vulgar enacts upon his assaulters which at times rings as somewhat comic booky in the way it plays out, but at the same time elevates the story to a level above most rape/revenge flicks you’re bound to see. The revenge is somewhat bloody, but the assaulters fall more by their own hands than at the hands of Flappy. The final standoff between the patriarch of the psychos and Flappy really resonates in a way I had not expected upon approaching this film. 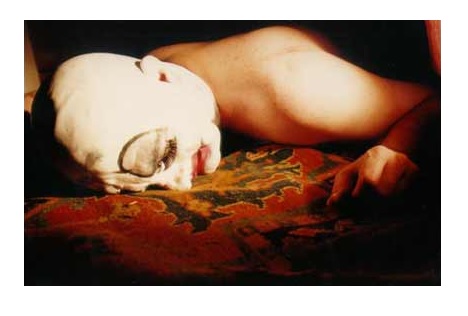 That said, VULGAR is very much a product of its time. Everything from the music to the rape scene itself seems to be pulled straight from PULP FICTION. It’s obvious Johnson emulated Tarantino while making this and seeing this odd mix of two of the 90’s top indie filmmaker icons is also interesting to see from a film buff perspective. Kevin Smith regulars talking Kevin Smith speak in scenarios that would be right at home in the alley behind Jack Rabbit Slim’s restaurant and dance club is a surreal experience to say the least.

VULGAR is an engaging bit of low budget filmmaking that feels like a snapshot of a time long gone. While it definitely pulls elements from some grimy grindhouse classics, it also reflects the indie uprising of the 90’s pretty well too. Plus O’Halloran offers up a memorable performance as a clown pushed to the edge. 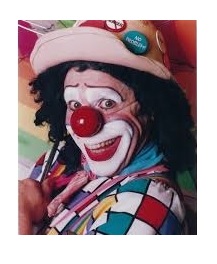 Previous Send in the Clowns Posts!
THE LAST CIRCUS
THE FUNHOUSE
SPLASH AREA: NIGHT OF THE FREAKS/CLOWN HUNT
STITCHES